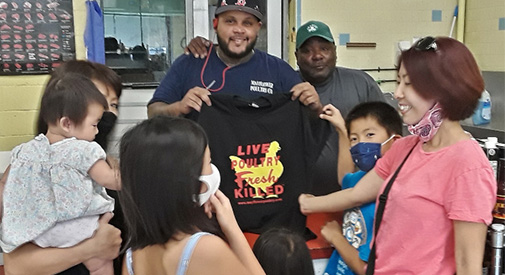 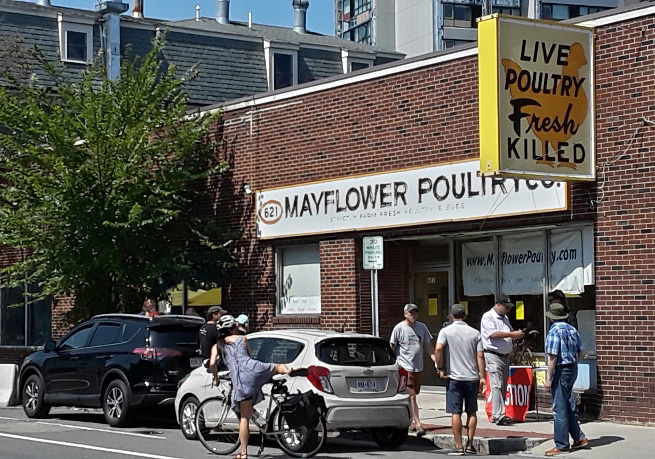 People wait for an Aug. 26 auction to begin in front of Mayflower Poultry in East Cambridge. (Photo: Glenna Wyman)

Keeping the iconic “Live Poultry Fresh Killed” sign in Cambridge despite Mayflower Poultry itself moving away was a closer call than many knew.

The East Cambridge Business Association won the physical sign for $14,500 and the trademark rights behind it for $8,000 at a public auction in front of Mayflower Poultry on Aug. 26, the shop’s final full day at 621 Cambridge St. It’s now a wholesaler in Boston.

It’s not certain yet where the sign will wind up, said Jason Alves, executive director of the ECBA, in a Thursday call, but “the worst-case scenario was somebody buying this and putting it in storage,” he said. “We’re committed to finding a way to get it back on display.”

The ECBA is in conversation with the City Manager’s Office and has “had a number of property owners reaching out and being like, ‘Hey, we can put it on my building.’ But right now there’s no plan. We’re just kind of testing the waters,” Alves said.

Ideally, there will be a “public space” for it in East Cambridge, said Atwood’s Tavern owner and business association president Patrick Magee.

The business and its building 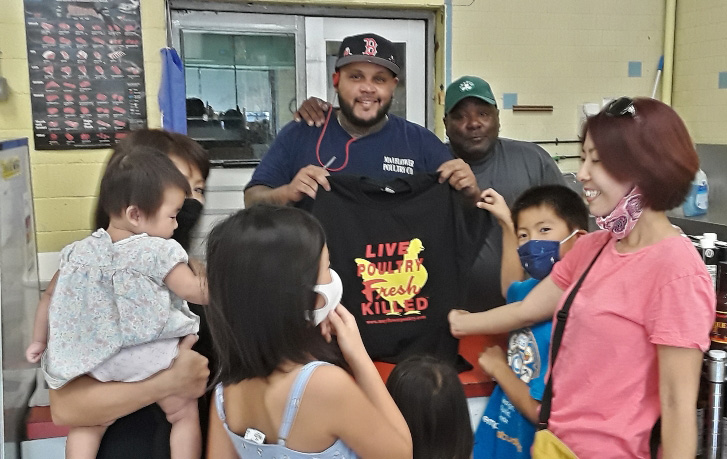 Mayflower workers Luis Feliciano, center, whose father worked at the poultry shop before him, and Doug Hall show fast-moving merchandise to longtime customers Wakako Yoshida of Lexington and, at right, Sahori Maruhasi of Cambridge, who came with their kids to say goodbye to the shop. (Photo: Glenna Wyman)

Mayflower Poultry opened in 1932 and traded hands from Richard C. Silver to current owner James Gould in 1996, Gould said in August. From then to around 2011, the numbers of people coming for actual “live ry fresh killed” dwindled. He ended that service, letting it live on in the attention-getting 6-foot sign and logo he’d trademarked in 2005 to sell on T-shirts and other merchandise. The move to 139 Newmarket Square, Boston, shifts the business even more toward wholesale, though longtime worker Luis Feliciano said individual consumers will still be welcome at Mayflower if buying at least 10 pounds of meat.

The big, brick Cambridge Street property stayed with the Silver family after the poultry business sale, though, until it was sold for $5 million to commercial redeveloper Riverside Properties on April 30 by Judith Silver and Stuart Silverman, wife and son-in-law of the late Richard C. Silver.

Riverside seeks a special permit from the city to convert the structure to office, research and development or laboratory use and said it plans to restore the distinctive trolley car barn at 613 Cambridge St., a garage that housed Mayflower’s large delivery trucks, and the Boston Bed Co.’s former industrial-size mattress-display room. In the interim, Lone Star Taco Bar has expanded its outdoor tables from the street directly in front of 635 Cambridge St. to along the carriage house. 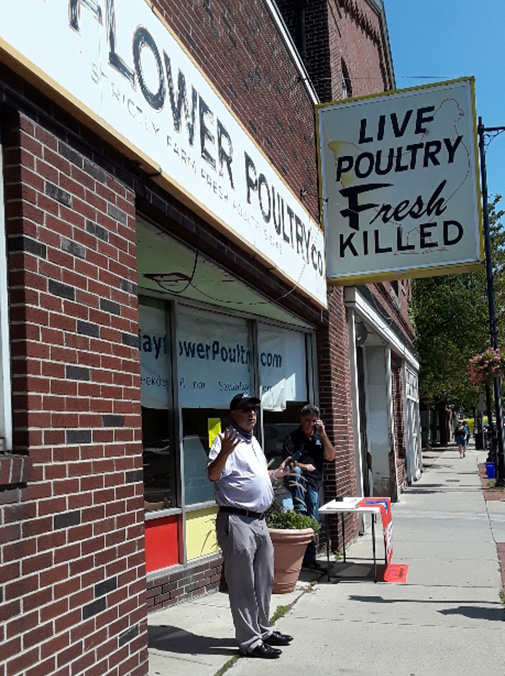 Auctioneer Michael Saperstein of the Paul E Saperstein Co. of Holbrook. Ralph Stewart is behind him taking bids by phone. (Photo: Glenna Wyman)

As the bidding began on Mayflower’s second-to-last day selling in Cambridge, two signs told the story. On the poultry shop’s front door was a flyer announcing that “It is with heavy hearts that we have to announce that our building has been sold and that we will be closing our retail operations.” Nearby was a banner advertising the space’s availability.

But Cambridge will now keep the Mayflower sign. Alves handled the bidding to make that happen.

At first, he competed with people who showed up in person as well as remote bidders, but as the figures rose the contest boiled down to the ECBA and one phone bidder – whose identity Alves still doesn’t know. “We asked. I don’t know if they don’t collect the information or if they just don’t say,” he said of the auctioneer, Paul E. Saperstein Co. of Holbrook.

As the bids rose in price, Alves paused to confer with Magee. With each successive bid, the pauses grew in length.

Most of the roughly dozen people gathered – including city councillor Tim Toomey and Chuck Hinds, president of the East Cambridge Planning Team – were onlookers. As the shape of the fight became clear, they became rooting participants in the drama.

“Everybody sort of understood what our intentions were and were turning to us and saying, ’Hey, we’re with you. If you need any help, we’ve got a couple of extra dollars if you’re running low.’ It was a pretty cool scene, and really reinforced why we were there to to try to take possession” of the sign, Alves said.

Money in the pocket 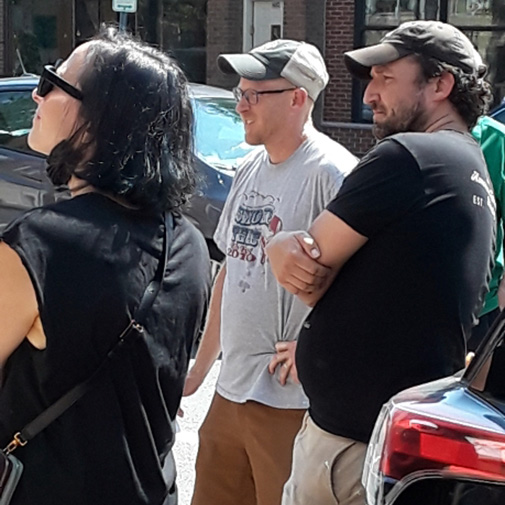 The business association had money in its pocket for the auction – “which is cool, because that means that all 150 members of the organization played a role in preserving this piece of local small-business history,” Alves said – but more came from a source that may surprise some people: Riverside Properties, which now owns the Mayflower building. It was the sale of the building that sent the poultry business packing, but Riverside, formed in 1992, is led by Brett Levy, a Brookline resident with offices in Wellesley who identified himself as a former Cantabrigian.

The day before the auction, Riverside told Alves it planned to bid for the sign too but was open to partnering because the company didn’t think the money it had committed would be enough to secure the purchase, Alves said. From there, Alves spent the day calling ECBA members to build an additional cushion.

Going into Aug. 26, the only guess at what would happen came from the 2018 auction of a neon sign from a West Roxbury fried chicken company; Alves’ research found that it went for around $4,000 – ultimately, less than one-third of what the ECBA bid for the Mayflower sign. “Nobody that you talked to could really put a price tag on it,” Alves said. “I don’t think anybody thought the sign was going to go for that much.

“To be perfectly honest, it went much higher than we thought it was going to, and ultimately we came in just under the money that was committed in that 24-hour period,” he said. “We cut it close.” 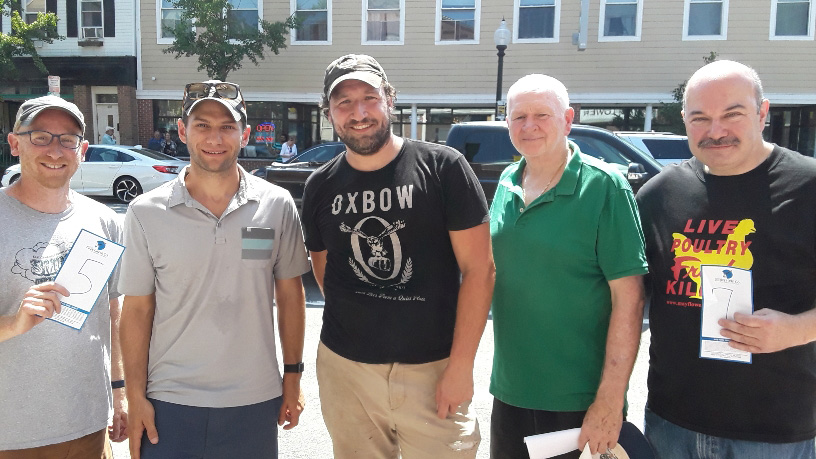 It was good to win the sign and experience the community coming together to get it, he said, considering the tough run that business has had in the past year.

Alves said he got an email from Formaggio in Huron Village describing what happened when someone relayed the news that the ECBA got the sign: “There was an audible cheer within the shop,” he said.

“It just means something to people, and it’s cool to play a role to keep it around – that it won’t be a sign that used to be in East Cambridge and it’s not a sign that goes into storage somewhere. We’re going to get it back out there,” Alves said.

There will be another, earlier community benefit, Michael Saperstein told the people gathered Aug. 26, just before he called for bids: 10 percent of the auction proceeds and 20 percent of the auctioneer’s commission, called “the buyer’s premium,” would to go to Food for Free, the Central Square nonprofit that provides healthy food to the hungry. Gould, Mayflower’s owner, chose Food for Free as the recipient, said the auction firm’s Samantha Saperstein.

At its Thursday meeting, the Cambridge Historical Commission received a citizens petition to officially landmark the famous sign, but the matter was deferred to October so the staff could advertise a public hearing and submit their  recommendation.

Glenna Wyman contributed to this report.