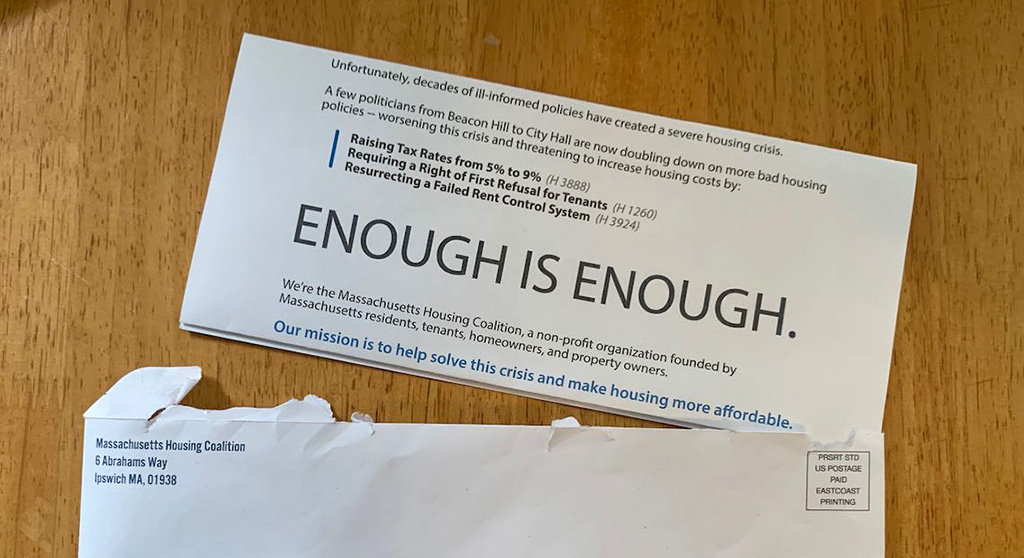 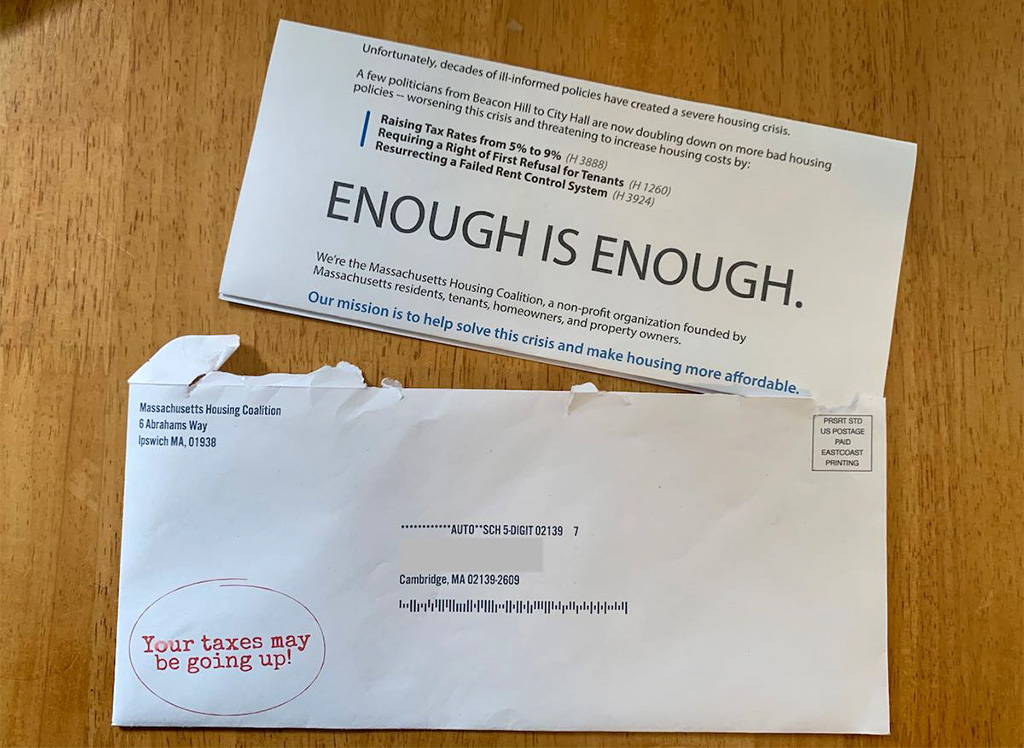 An image provided by state Rep. Mike Connolly shows the arrival of a flyer from the Massachusetts Housing Coalition. The address on the envelope has been obscured.

A mailing from the Massachusetts Housing Coalition warning of tax increases from tenant protection laws is misleading, Cambridge and Somerville state Rep. Mike Connolly said in a Friday message to constituents.

“Your taxes may be going up … enough is enough,” the group blared in large, all-caps headers in a spring mailing, citing a bill filed by Connolly that it says could raise tax rates between 5 percent to 9 percent.

The warning about tax increases to owners of homes and businesses is “meant to get your attention [but] has the benefit of being true,” according to the Massachusetts Housing Coalition, a nonprofit led by a four-member board of directors that includes attorney and developer Sean Hope; executive director of the Harvard Square Business Association Denise Jillson; attorney and landlord Charles R. Laverty III; and developer Ben Deb.

Connolly said last week that he was trying to correct that false impression and others left by the mailing before three tenant protection laws return to the state Legislature for discussion.

The MHC’s warning is untrue for all but “the wealthiest 1 percent of households in Massachusetts” and applies only to long-term capital gains income and other such assets, Connolly said. His refiled bill also “includes several exemptions for seniors, the disabled and low-to moderate-income folks. This is in addition to existing exemptions, such as a major exclusion from capital gains taxes relative to appreciation on the sale of a personal residence.”

Eighty percent of the income targeted by this proposal goes to the wealthiest 1 percent of households, Connolly said, “and that’s before including the additional exemptions we have proposed for lower-income households, seniors and people with disabilities.”

Hope and Jillson were emailed Friday with requests for comment. Hope said Monday that he was reaching out to the board for a response, but nothing further was heard.

Connolly said his bill, called An Act Implementing Progressive Options for Raising New Revenue, was based on recommendations of the Massachusetts Budget and Policy Center, a nonpartisan public policy think tank that says it has provided research and analysis behind such efforts as raising the state’s minimum wage, establishing paid family and medical leave and calling for “fairer corporate taxes that have netted substantial revenue for vital state programs.” The center sums up its work with the slogan “racial and economic justice require tax justice and equitable state investment.”

The Massachusetts Housing Coalition similarly says it believes in “making a direct impact to those in need of affordable and accessible housing” and is committed to “sustainable and smart growth housing environment that supports economic, racial and social equity.” Hope is known as a developer of 100 percent affordable housing projects within Cambridge, including the recently opened Frost Terrace near Porter Square.

Jillson was president of the MHC in the 1990s when it succeeded in overturning rent control laws in Cambridge, Boston and Brookline. The statewide vote was won by a 51 percent majority that leaned on voters outside the affected cities, while 49 percent wanted to keep rent control.

Rent control appears on the coalition’s spring flyer in a warning that a bill presented by Connolly and state Rep. Nika Elugardo of Boston will be “resurrecting a failed rent control system.” Their Act Enabling Local Options for Tenant Protections describes its purpose as broader, though: to “provide municipalities with a variety of flexible options to help address the housing emergency in a locally appropriate manner” by regulating rent and eviction laws – with the option that the laws would apply only in certain zones or only for people meeting specific income thresholds. The bill lets cities and towns “craft tenant protections that make sense on the local level,” Connolly said last week.

The act won the support of Cambridge’s City Council in an 8-1 vote in June 2020, with the retiring Tim Toomey being the holdout. Somerville’s council approved it unanimously the year before.

The “yea” votes in Cambridge included councillor Patty Nolan, who owns rental property in the city and often speaks from that perspective during council meetings.

“Generally, I’m glad to have local control, and that’s what this bill does. It doesn’t – just to remind us all – it doesn’t mandate anything,” Nolan told her fellow councillors. “In the spirit of transparency, I do want to make it clear that I am not supportive of bringing back rent control in the same form that we had here in Cambridge… we have to be really careful in our analysis of what ‘local control’ means and make sure that we are nuanced and sensitive to the various issues that arise whenever we pass this kind of legislation.”

As applied in Cambridge, rent control affected some 16,100 apartments over the quarter-century that ended Jan. 1, 1995, but only a small percentage of those tenants were low-income. The system “really hurt a lot of the housing stock [and] numerous studies on rent control have raised serious questions about its effectiveness,” Nolan said. “Very progressive economists are in agreement and don’t tend to support rent control.”

The MHC mailing also warns against an act that would give rental tenants the first chance to buy their homes if the owner decides to sell. An Act to Guarantee a Tenant’s Right of First Refusal has also been supported by the city councils of Cambridge and Somerville, but the mailing includes it as risking “worsening this [housing] crisis.”

But Connolly said the act – proposed by Cambridge state Rep. Jay Livingstone and state Rep. Rob Consalvo of Hyde Park, Roslindale, Readville and West Roxbury – only allows tenants to match what’s offered by a third-party buyer and within a “very narrow” window of as little as 15 to 30 days. In addition, “the legislation includes broad exceptions for small landlords who reside in Massachusetts and own up to six units of housing” and exempts certain transfers to family members.

The right of first refusal is presented as only an option that may or may not be adopted by an individual city or town – and then revoked – and includes that “no owner shall be under any obligation to enter into an agreement to sell such property to the tenants” after giving them a chance to buy.

The mailing by the MHC doesn’t go into detail on specific opposition to the bills, but urges its readers to “join our fight to protect equitable access to housing and respect the rights of homeowners.”

Connolly said he was encouraged by staff and allies to raise attention to the mailing’s “several misrepresentations” considering that the legislation would be coming up again. It seems “apt to divide our community at a time when we’ve all seen the terrible damage that can be caused by misinformation in the public discourse,” he said. “The residents of our two cities deserve to know who is behind this letter and what it gets wrong or leaves out.”