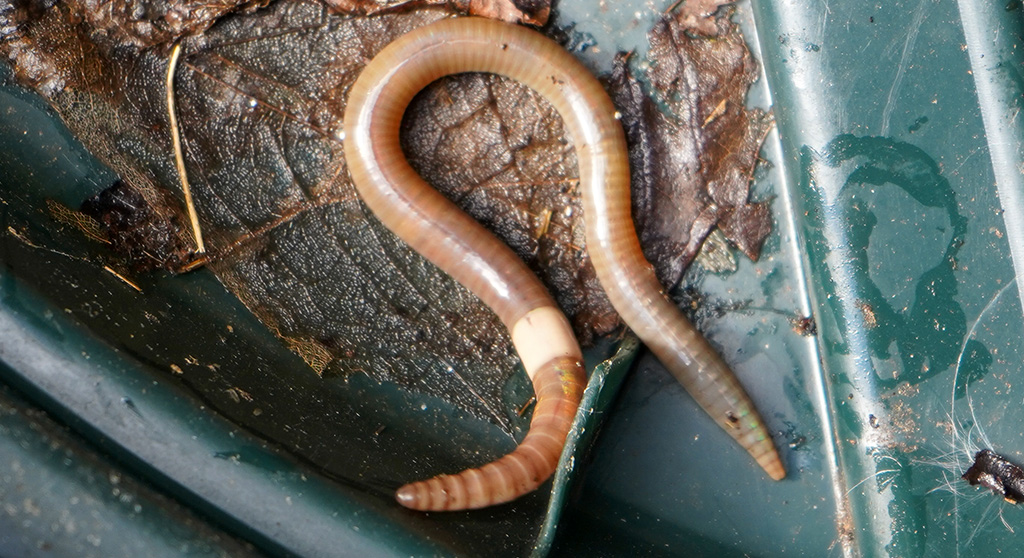 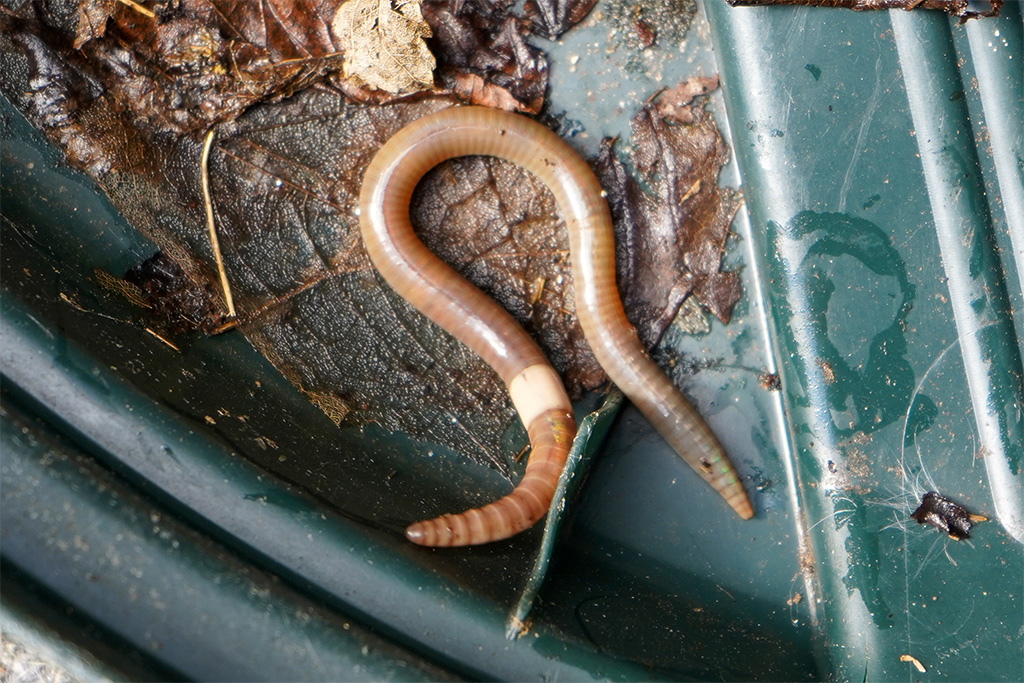 The Asian jumping worm is an invasive species hailing from Korea and Japan. (Photo: Jeanine Farley)

Earthworms seem to be ubiquitous in our soil, but did you know that the worms we see in Cambridge today are not native to the Northeast? The last ice age (which ended about 10,000 years ago) wiped out earthworms as far south as northern Pennsylvania. Our forests, for example, evolved without earthworms. Our forest floors have a thick layer of leaf litter that helps prevent erosion and retains moisture native plants need for their seeds to germinate. By devouring this layer, earthworms impair growth of native plants. Over time, native plants disappear and invasive species such as garlic mustard take over. The entire ecosystem changes, and the changes affect not only plants, but also insects, birds and other species.

The earthworms we are familiar with today, such as nightcrawlers and red wigglers, most likely came from Europe aboard ships or in the soil of imported plants. Early sailing ships from Europe used rocks and soil as ballast. After a transatlantic voyage, the sailors dumped the rocks and soil ashore, replacing them with goods to carry to their next destination. Many European weeds and soil critters, including worms, probably arrived in North America this way. In the Northeast, these worms became naturalized, and people today think of worms as belonging here. (Since the late 1800s, ships have used water as ballast, and this practice has introduced invasive marine pests such as zebra mussels. But that’s a story for another day.)

Earthworms may have been introduced to the Northeast in other ways, too: During the 19th and early 20th century, Americans imported European plants that probably had earthworms or earthworm egg cases (cocoons) in the soil. Today, worms used as fishing bait can introduce worms to new areas. There are at least 21 species of earthworms in Massachusetts, none of which are native.

Even though earthworms are not native, they are good for the soil, right? They decompose leaves, aerate the soil, improve drainage and carry nutrients underground. This is perhaps true in agricultural settings. If you are a gardener or a farmer, earthworms might benefit your soil – although there is some debate about this, and the topic has not really been scientifically studied.

What is certain is that New England forest plants have evolved other ways to get nutrients from the soil. European earthworms, which evolved with many plant species that are invasive here, prepare the soil for invasive plants that can take over the layer of vegetation known as the understory. Scientists have demonstrated a pattern of decline in forest diversity with the spread of European earthworms. Worms alter the properties of soils, change the pH, nutrient and water cycles and disrupt symbiotic relationships between soil fungi and roots. The more earthworms that live in a forest, the more the native plant loss there. 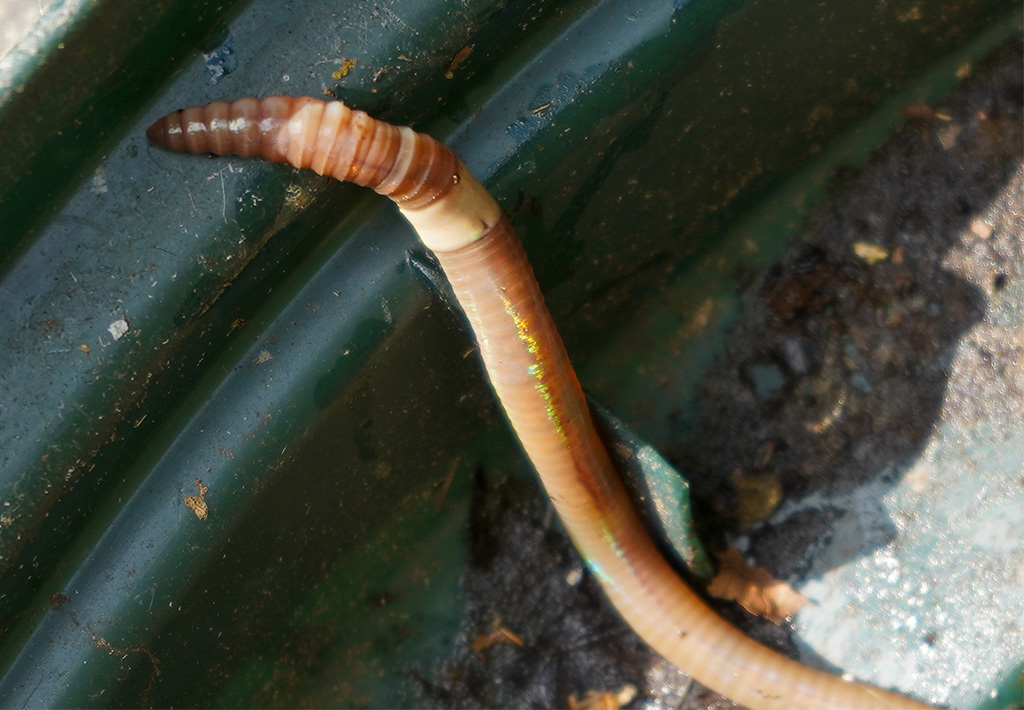 Jumping worms have a white band called a clitellum that circles their body near the head. (Photo: Jeanine Farley)

Most earthworms in Massachusetts belong to the family Lumbricidae. These worms can live for up to 10 years and tolerate our cold winters by burrowing below the freezing point (up to 6 feet in depth). The worms do not like heat, and they spend summers below ground in a resting stage. These earthworms collect aboveground organic matter such as leaves and drag them back underground to their burrows.

Another type of worm that is getting a great deal of attention these days is commonly referred to as the Asian jumping worm, which hails from Korea and Japan. These worms are also invasive. Invasive species outcompete other species and can dramatically change the ecosystem. These worms do not burrow but live near the surface in the leaf litter. They cannot withstand cold weather, so they die out each winter, but their egg-filled cocoons survive. In the spring, the eggs hatch and the worms become active and grow throughout the summer. They are most noticeable in August and September.

Asian jumping worms are the most serious threat to our forests, as they devour leaf litter much more rapidly than other worms, stripping the forest of the layer critical for seedlings. They reproduce more quickly than European worms, and they can infest soils in great numbers. They also damage plant roots and disturb the soil, which encourages invasive plants to grow.

Jumping worms leave behind granular castings (poop) on the soil’s surface. These castings make the upper layers of the soil look and feel grainy. This change to the soil structure may or may not harm cultivated plants, but it can be very damaging to native plants and animals.

Some gardeners in Cambridge and Somerville have noticed Asian jumping worms in their yards. How can you tell if you have jumping worms? They’re surface dwellers, so you can find them under leaves or in the upper few inches of soil. Jumping worms are fairly easy to identify because of their intense wriggling (and sometimes jumping) behavior when touched. Jumping worms have a white band called a clitellum that circles their body completely near the head. If you poke one, it will writhe intensely and move very fast, unlike other worms, which may recoil when touched but tend not to do much traveling or wriggling.

This video shows the unusual and agitated movements of jumping worms.

If your garden mulch is disappearing, you might have jumping worms, for these worms rapidly consume mulch and even wood chips. Some jumping worms even have an enzyme that allows them to digest wood fibers.

How can you avoid getting jumping worms? These worms migrate very slowly, so they most likely will arrive in your yard if they are brought in with topsoil, mulch, compost or infested plants. You can also carry the egg cases in the treads of your shoes or car tires. Before you buy a new plant, look at the soil; if you see signs of granular castings on the surface, don’t buy the plant.

Bringing in even one jumping worm can lead to an infestation, because these worms do not need a mate to reproduce. Like other worms, they lay a cocoon with eggs inside. Jumping worm cocoons are difficult to detect because they blend in with the soil and are very small. The cocoons overwinter near the surface and hatch worms in the spring.

How to avoid jumping worms:

The University of Massachusetts offers this fact sheet on jumping worms.