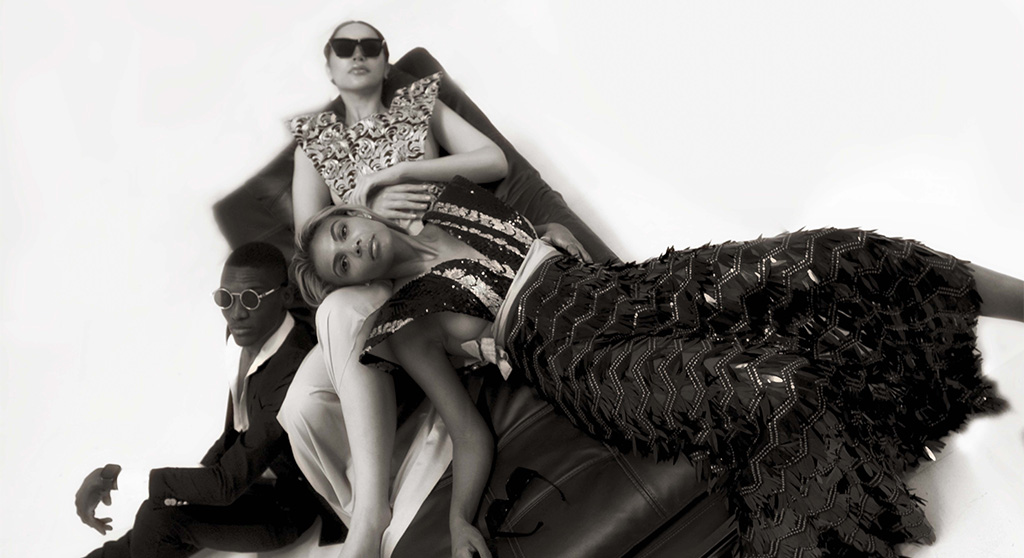 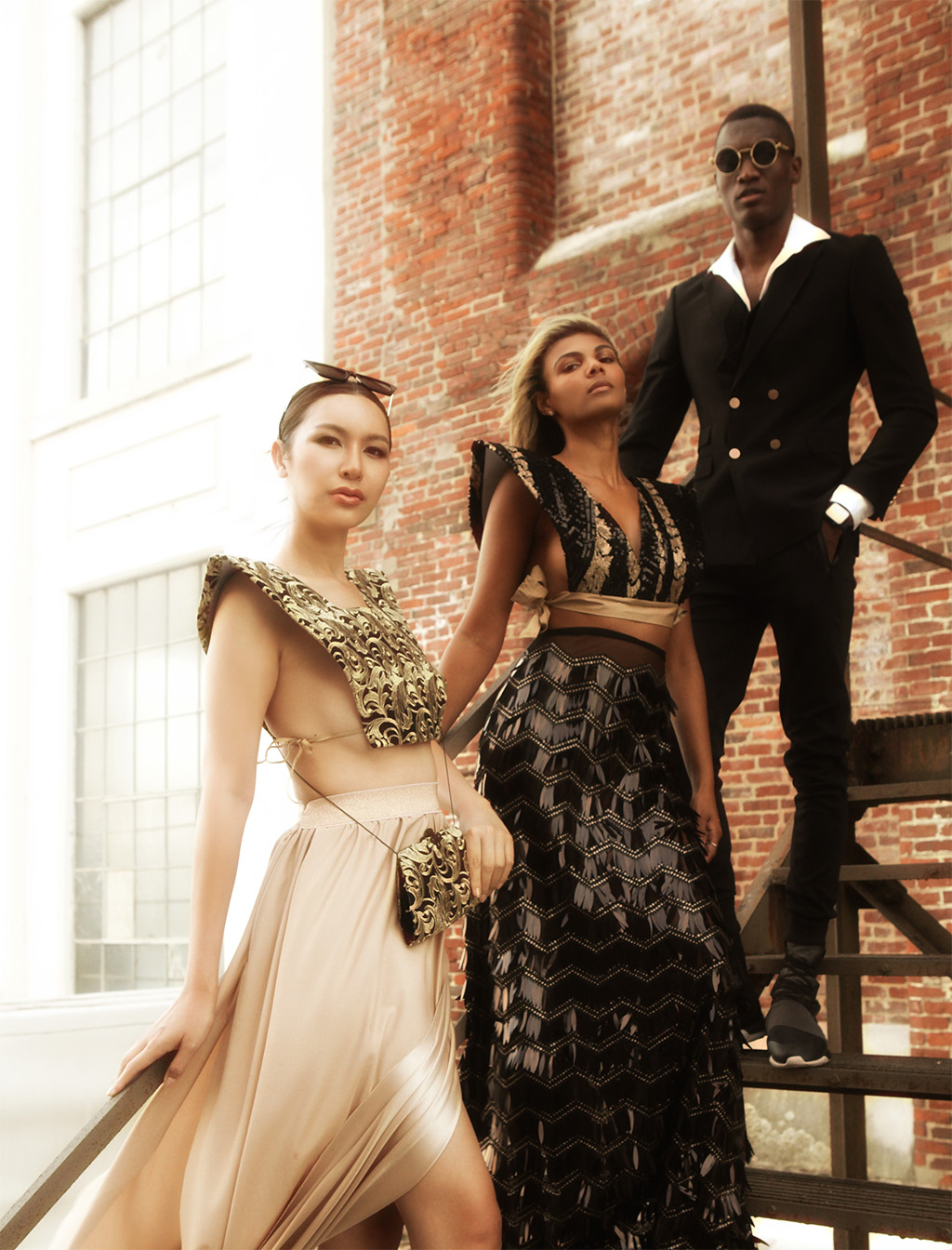 Saruda, Marley and Lorde wear the work of Bless Mazarura, including his “shield” tops, on his Lawrence studio’s rooftop. (Photo: Janna Giacoppo)

Bless Mazarura’s Bless by Bless capsule collection of limited-edition “luxury wardrobe essentials” is available at a pop-up shop at Cambridgeside until the end of the year. Items range from gender-neutral down puffer coats, pure-wool blazers, bomber jackets, T-shirts and blue and black denim and retail from $34 to $300.

Among the racks of Newbury Street-worthy fashion available since Sept. 13 at the East Cambridge mall, shoppers may find a few of Bless’ favorites: the “shield” tops created by request for Miami Fashion Week several months ago, a bathing suit concept that he’s made pairable with pants or skirts. (They become available to the general public next spring.)

At Bless’ studio in Lawrence, a converted former paper mill, Marley, a model, stood in early September at a mirror wearing a black and gold beaded shield top, a mix of architectural strength and delicate details that epitomizes the balance of opposites often seen in Bless’ work. The fabric is cut dramatically into Vs front and back with sharp shoulders and open sides, tied together by a silken sash around the ribcage. Bless pairs it with a long, asymmetrical skirt of scalloped iridescence. Marley looks powerful. Royal. Warrior-esque, with echoes of Bless’ native Zimbabwe, though many Africans are so heavily westernized that they often will not know when something originated from their own culture, he says.

“The shield was influenced from how we used to dress. Because we have forgotten,” Bless said.

As he looks at the shape of the scalloped beading, he thinks of the pangolin, an animal native to Africa. He points out textures and patterns that indicate an almost accidental, subconscious African influence on more of his work than he’d realized. 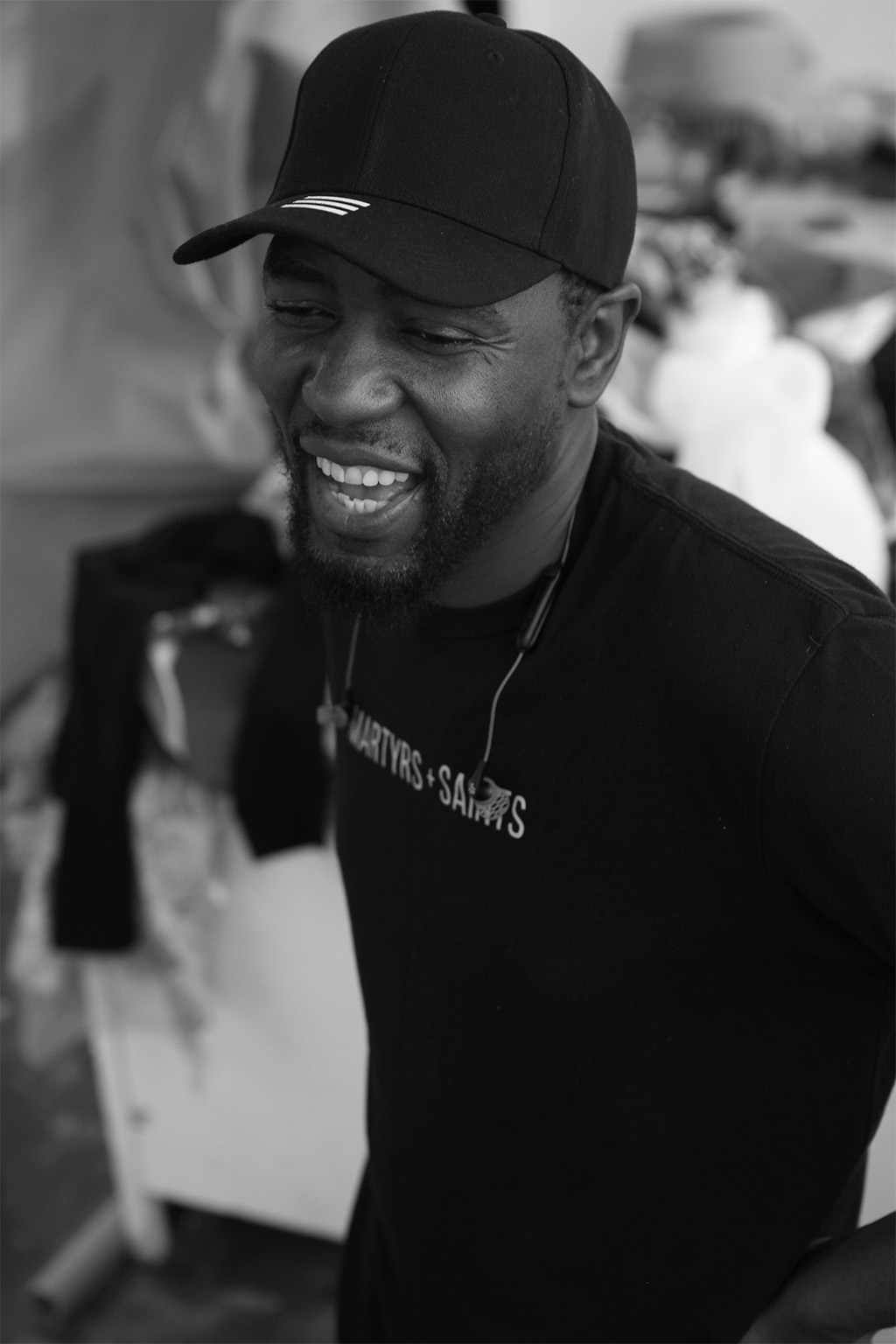 Bless grew up in a small village where he “ran around barefoot in the bush.” He encountered his first fashion inspirations as a teen, when his dad returned from overseas travel with VHS tapes of MTV videos from the late ’80s and early ’90s. “They got the jeans with the spray paint, and like the plaid, with the big pockets and colorful jackets. And I’m thinking to myself, man, it looks so cool.”

His mom, a tailor in a village where she lived after his parents separated, taught him how to copy the looks he coveted. “The next thing you know, I had these, like, denim vests with big pockets, very Bell Biv DeVoe. And everywhere, people would go, where’d you get those?”

He took pride in being able to help her, even helping her thread needles when her eyes got tired. But he lived with his dad after the split, and his visits were few. As he grew older he craved the missed time that left a “giant, empty space” in his heart, and when his mother died those childhood memories took on a new potency. “When I hear that thump of the sewing machine – that’s us. That would be the moment where there’s nobody else there. Just me and my mom.”

The way you wear it 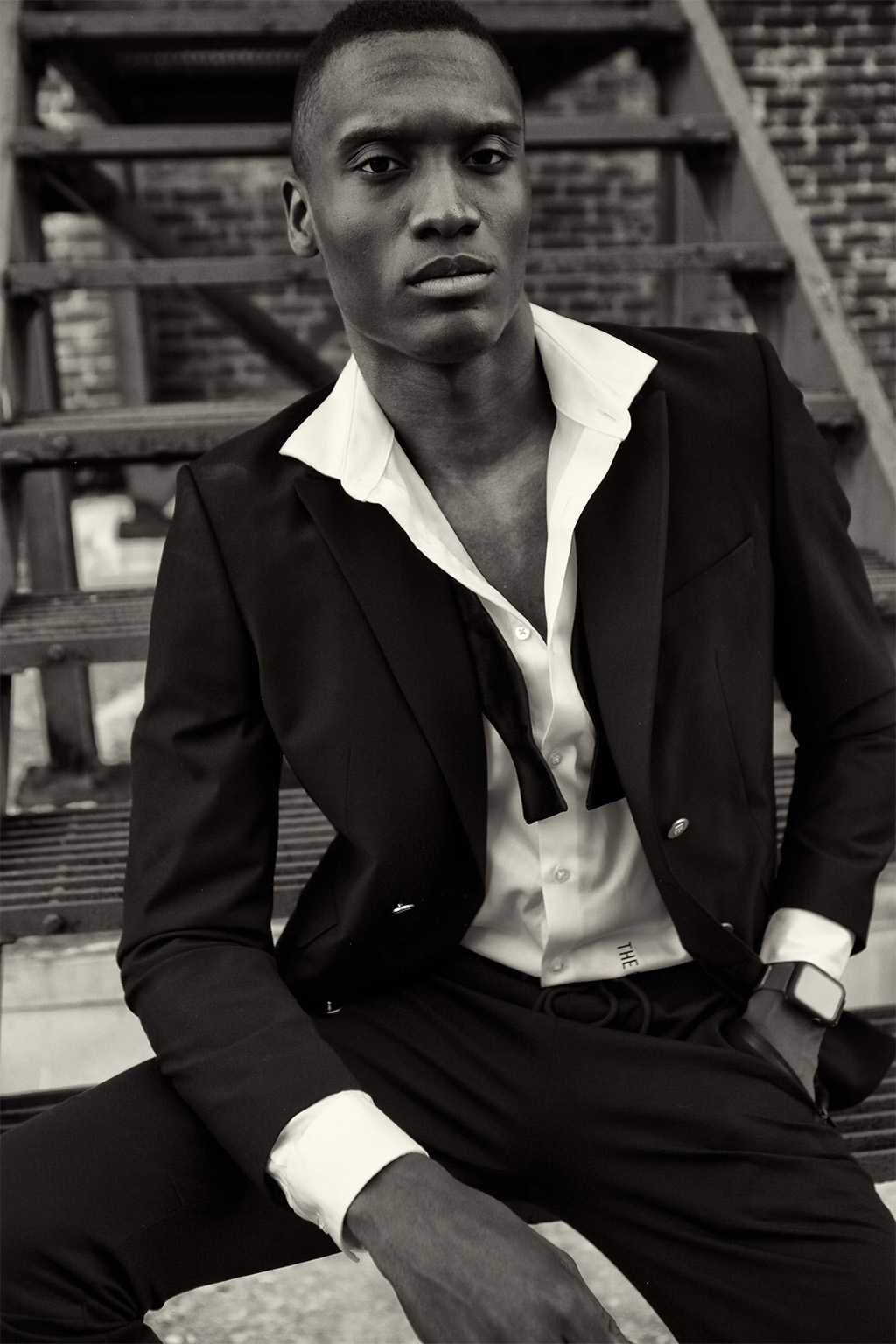 These days Bless says he gets his inspiration from people he sees on the street – “The one thing that I am always trying to find is style” – but still waxes poetic about the insouciant cool of James Dean, who could make a white T-shirt stand out.

The top of everyone’s style list right now should include “a hot blazer,” Bless says, “but whatever you wear, make it look like you took so much time to buy it because it’s quality and it’s unique. Then the way you wear it: Make it look like you just jumped into it.” 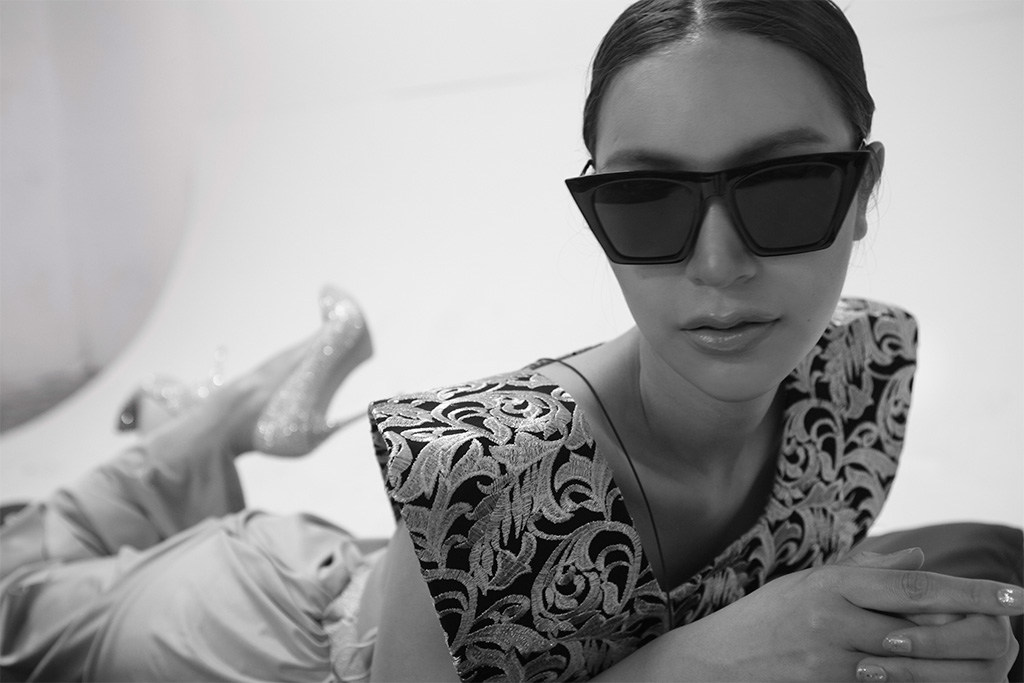 That pretty much describes Lorde, a striking 6-foot-4 model in many of Bless’ campaigns who’s in the Lawrence studio modeling a double-breasted, gender-neutral navy blazer. He’s paired it with a white button-down shirt, charcoal track pants and lace-up Y-3 sneakers for a mix of formal and relaxed. “Looking like you own the world!” Bless says to Lorde.

“I want people to feel special. I want them to say, I’m so special that I’m going to have this moment, and I’m going to feel this beautiful,” Bless says. 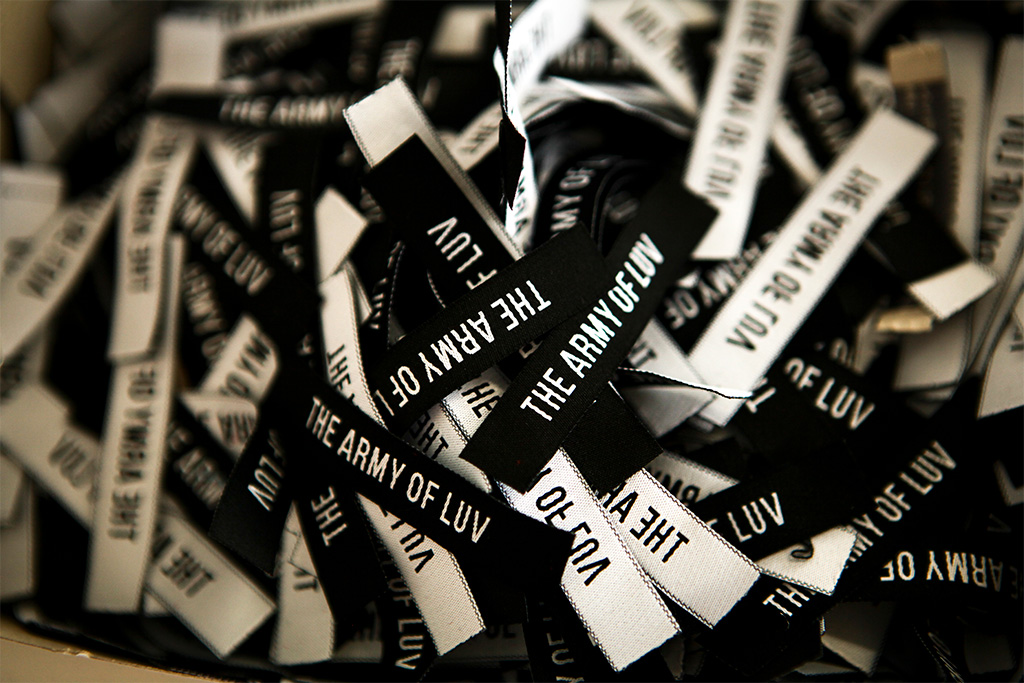 Bless’ signature nonprofit Army of Luv collection includes clothes such as T-shirts, sweatsuits and new handbags that bear messages encouraging unity. The line was created to express his belief that love is the strongest force there is, and his desire to invite people to band together under that conviction. This mission of good will and kindness expands back to Africa: For every $250 that Bless by Bless makes, one girl or boy is put through school for the year in Zimbabwe. He’s started with funding the school his mother went to as a young girl but was unable to finish because her family couldn’t afford it.

Aware of the negative messages fashion can often send, Bless aims to promote oneness and inclusivity. He created his logo – three lines representing the repeated B in his name and “Bless by Bless” – to be a symbol for “tribe,” and he sews it into in small details such as the edge of a shirt hem. “We have so much value and individuality, but we can but also teach others, and learn from each other. We are all just one giant tribe,” Bless says.

Bless by Bless shows at Cambridgeside on Oct. 7 for Boston Fashion Week; its winter capsule collection is at the Liberty Hotel in Boston on Oct. 14.