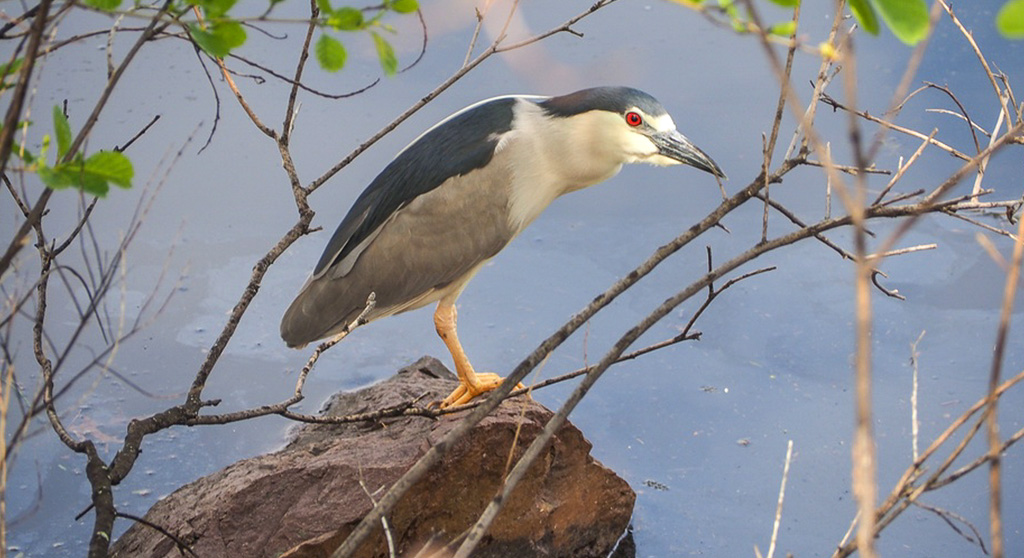 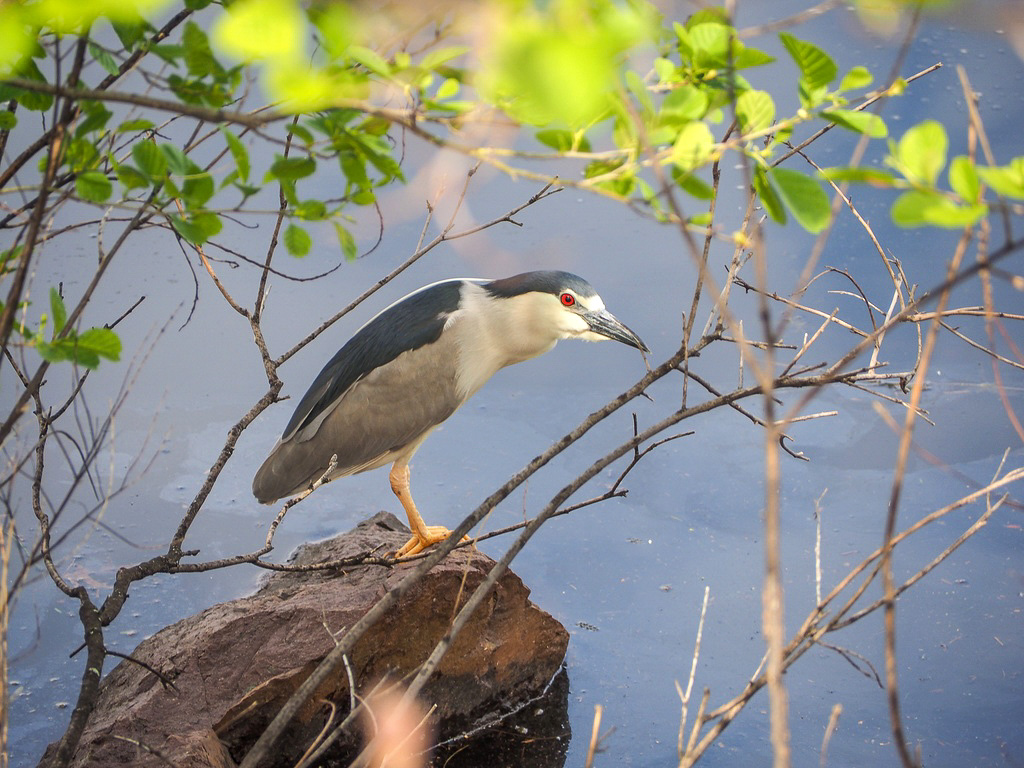 A black-crowned night-heron rests along the water’s edge in Somerville. (Photo: Jeanine Farley)

There are nine species of herons in Massachusetts, including the well-known great blue heron and the all-white egret, but if you are lucky, you might also see a lesser-known heron, the black-crowned night-heron (Nycticorax nycticorax).

Black-crowned night-herons are stockier birds than other herons. They have striking red eyes and yellow legs. Most active at dusk or at night (hence the name), they might also be seen resting motionless along the water’s edge during the day. They have gray and black feathers, and sometimes you can see their long, white head plumes. They live in Massachusetts freshwater and saltwater wetlands and are the most common heron in the world.

At dusk, these herons fly to their hunting sites, calling “kwok” in the darkness. Then they stand at the water’s edge or wade into shallows and wait patiently for their prey to swim by. They may dip their bill into the water and vibrate it to attract fish, and they are one of the few birds in the world that toss objects such as feathers or live insects into the water to entice fish to swim over. Once a fish is nearby, the heron grabs the fish in its beak and shakes its head back and forth, much like a rat terrier, until the prey is killed.

Black-crowned night-herons are carnivores and will eat almost anything edible that crosses their path, including, of course, fish and crabs, but also worms, insects, turtles, rodents, birds and eggs. They have even been known to eat garbage from landfills. Black-crowned night-herons feed from evening to early morning. By hunting during the night, they do not compete with other species of herons that hunt in the same locations during the day. 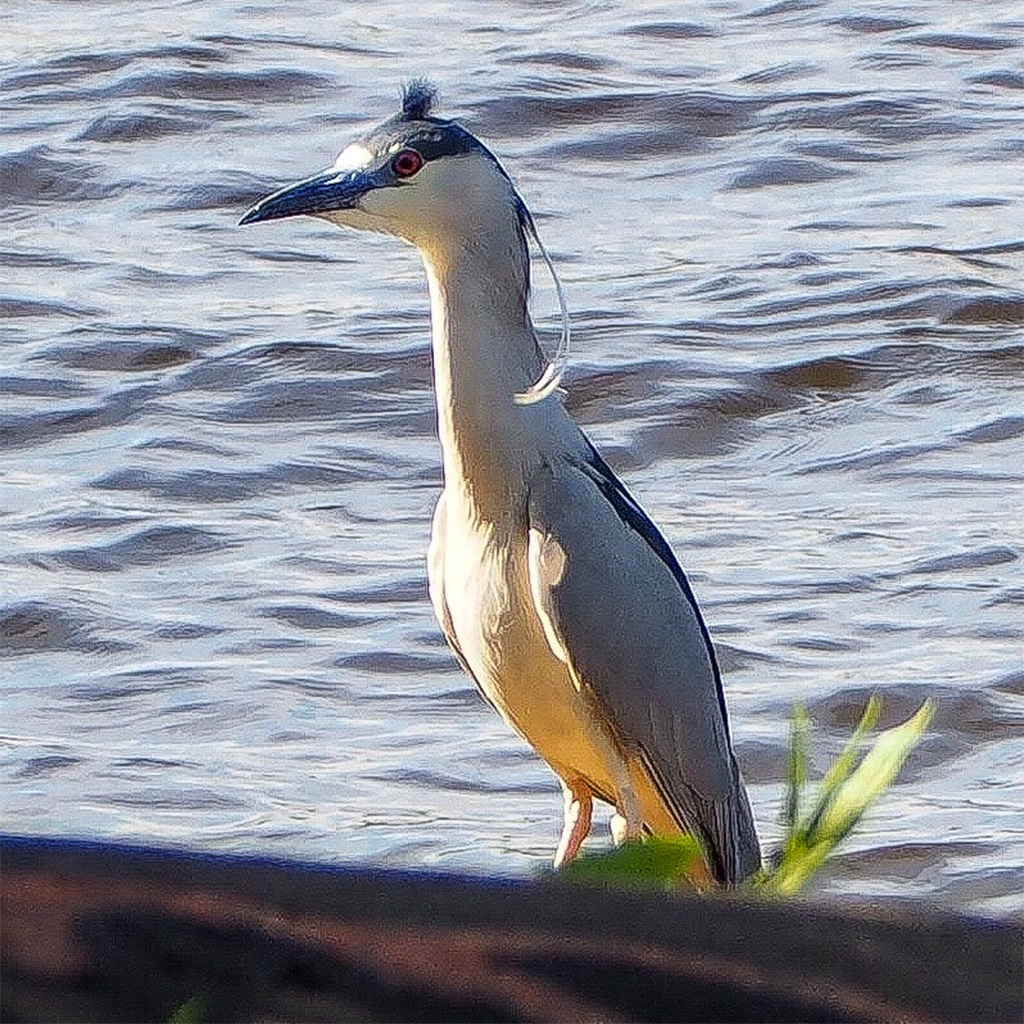 Black-crowned night-herons are migratory, and they usually arrive in Massachusetts in mid-March after the herring migration up the Mystic River. They are social birds that nest in groups – often with other birds such as great blue herons, egrets or even gulls. They nest and breed in large tree colonies called rookeries in the Boston Harbor Islands and other coastal locations.

A male heron starts the breeding season by building a nest of sticks and vegetation. Once the male finds a mate, he continues collecting nest materials though it’s the female that works them into a nest about 12 to 18 inches in diameter and up to a foot deep. The female heron lays three to five pale greenish eggs in late April or May. 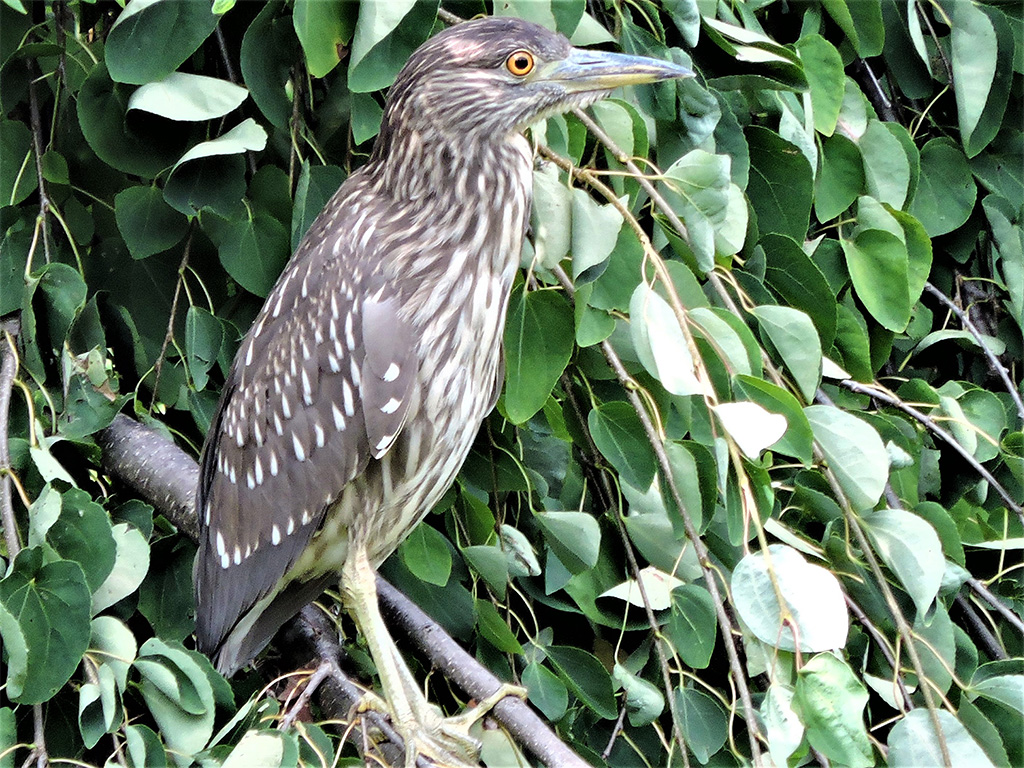 The male and female herons work together to keep the eggs warm and to raise the chicks when they hatch after about 25 days. The adult herons regurgitate to feed predigested juices to the very young; as the chicks grow a little older, the diet changes to partially digested fish and marine animals. Young herons climb out of the nest when they are about a month old. At this age, they can climb from tree limb to tree limb but cannot yet fly, and many fall to their death. Those that make it to the ground congregate in nighttime flocks because they are at great risk from predators until they learn to fly at about 6 weeks old.

Youngsters and adults leave the nesting colonies in mid- to late July. They gather along the coast near good feeding locations. In October and November, most of these herons fly south to overwintering grounds along the southern Atlantic coast or Caribbean shore. Some stay in Massachusetts until December, and a few spend the entire winter here. The herons migrate at night, flying alone or in small groups. 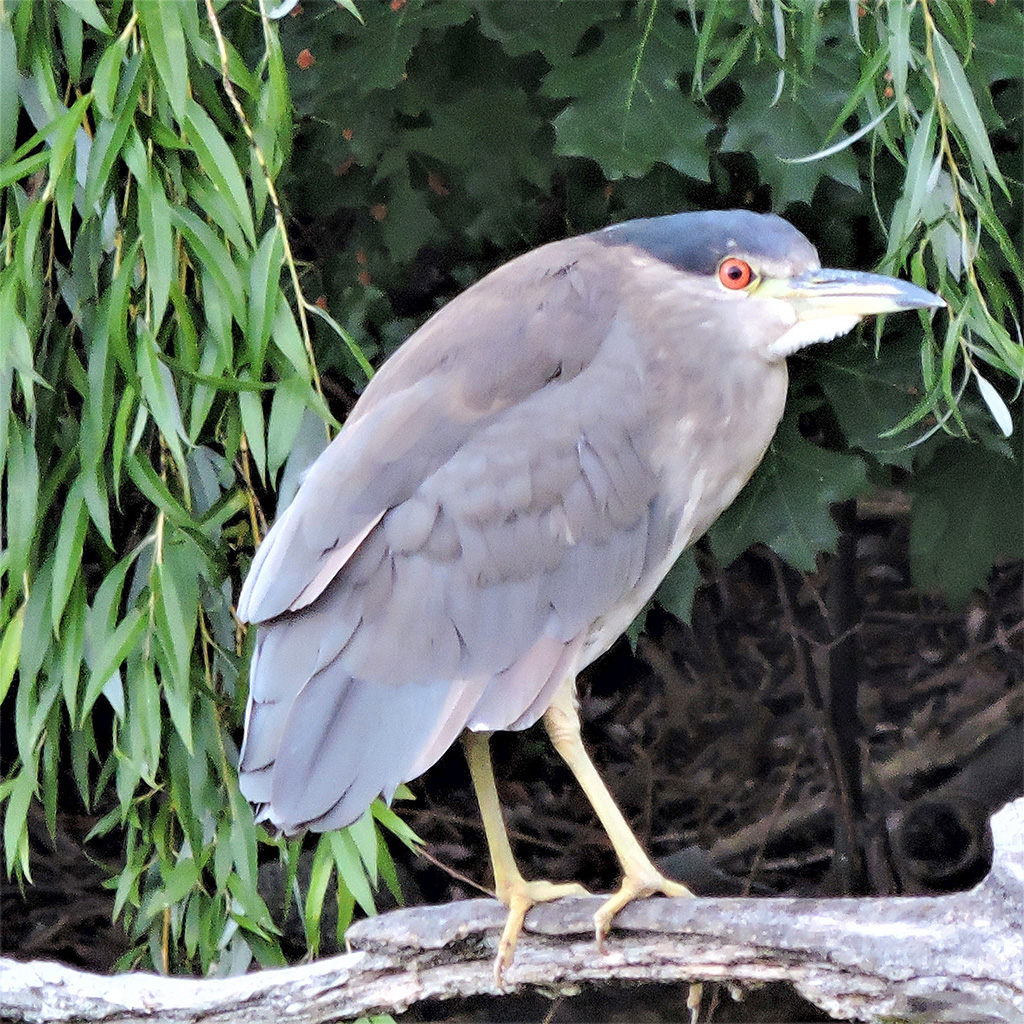 A black-crowned night-heron at the edge of Yates Pond in Cambridge. (Photo: Ann Schlesinger)

During the 1950s, many nesting sites of these birds were destroyed by shooting or dynamiting because people did not like the noise or the smell. Contaminated runoff, DDT and coastal development also contributed to their decline. Since herons are at the top of the food chain, when the birds ate fish that contained pesticides, PCBs and heavy metals, the toxins accumulated in the herons’ bodies. Their eggshells became so thin that they could not reproduce.

PCBs and DDT were banned in the 1970s, and since then the numbers of black-crowned night-herons have stabilized. In Massachusetts, there are about 15 to 20 major rookeries. Black-crowned night-herons are no longer common in interior or Western Massachusetts (although they were once found in the Connecticut River Valley). Today these birds are affected by a number of threats, including wetland loss and water pollution, mostly due to human development, lawn chemicals and agriculture.