We’ve had anti-vaxxers before, but for smallpox, and a Cambridge case went to the Supreme Court 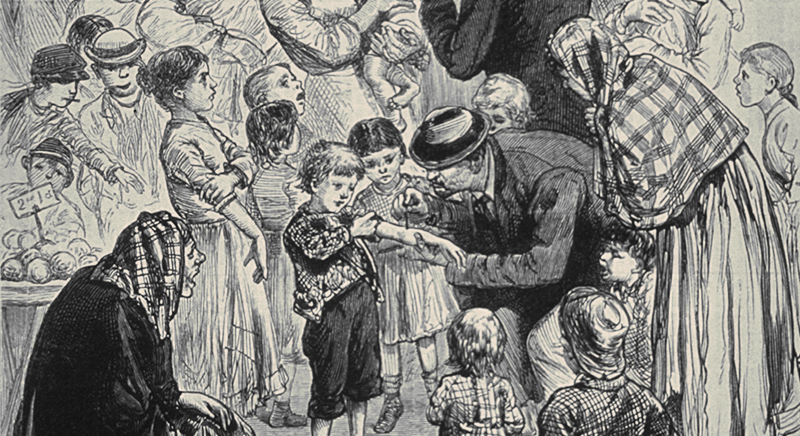 We’ve had anti-vaxxers before, but for smallpox, and a Cambridge case went to the Supreme Court

A headline from the Cambridge Chronicle of June 21, 1902. (Image: History Cambridge)

Heated discussions of vaccine mandates and the class and racial tensions inherent in these conversations may seem like a contemporary dilemma, but Cambridge engaged in similar debates around the issue of smallpox vaccination and public accommodation more than 100 years ago. Although smallpox had been present in the city for almost three centuries by this point, a series of localized outbreaks beginning in the 1890s brought it back into the public spotlight and sparked debates about the safety and efficacy of vaccines, racial, ethnic and class disparities, and the role of government in public health.

As early as 1893, the Cambridge Board of Health was offering free smallpox vaccinations to the public at three locations in the city. By 1898, the School Board had adopted a resolution that children must be vaccinated (or must present a certificate of exemption from a doctor) to attend public school. In 1902, another smallpox outbreak had led the Board of Health to divide Cambridge into 17 districts, each with one or more physicians whose job it was to ensure vaccine compliance. During the first few months of this citywide vaccination effort, thousands of residents got their shots, but the presence of physicians in a wide variety of Cambridge neighborhoods revealed class, racial and ethnic tensions simmering just below the surface.

In May 1902, the Cambridge Tribune published the firsthand account of a junior physician acting as staff for the Board of Health. He refers to a family of Irish immigrants as “the MacSomebodys,” noting that they were all very close in age. In this way, he removed the importance of their individual name and identity and reinforced the common stereotype of Irish immigrants as ignorant and fertile, with numerous offspring contributing to their poverty. The author also expressed his reproach for a Black family, stating that “there was more wailing in a colored family consisting of a mother and two children than there was in a Swedish family of six, who were an altogether delightful lot – light-haired, pretty children, every one.” It is important to note that, for many readers of the Cambridge Tribune, this type of “behind-the-scenes” narrative may have been one of their only glimpses into the world of Cambridge’s poorer residents. By reinforcing stereotypes rooted in class, race and ethnic identity, writers such as this physician perpetuated the discriminatory attitudes that had long been present in the city; doing so as an official city agent gave added credence to these stereotypical portrayals.

Not all Cantabrigians accepted the authority of the Board of Health and its designated agents, however; in response to state and city vaccine mandates, anti-vaccination societies sprang up in Cambridge and across the state. Most of those who joined such societies were not against vaccination itself, only the laws making it compulsory. But a small contingent of anti-vaccinationists were vocal about their belief that smallpox itself was of relatively little danger compared with what they saw as the evils of the vaccine. And because they assigned smallpox infection to certain voluntary behaviors such as hygiene, diet and exercise, vaccine opponents were able to assign blame to victims for their own sickness and oppose vaccination as an appropriate public health tool. 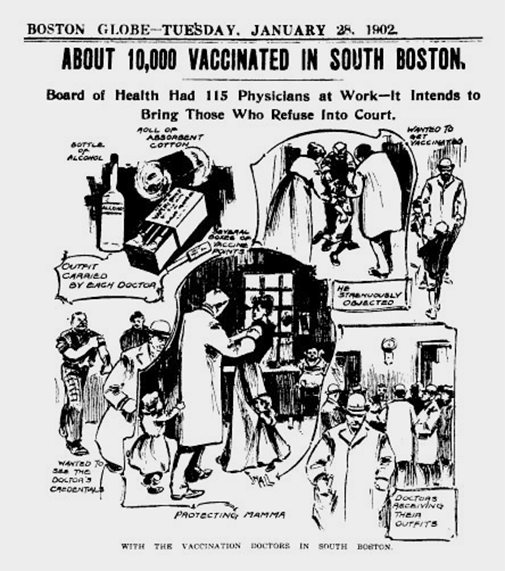 An image from The Boston Globe from 1902 looks at a visiting physicians system in South Boston run like the system in Cambridge. (Image: History Cambridge)

Although the membership of organized anti-vaccination societies remained small, stories about the dangers of the smallpox vaccine began to spread, giving some members of the public pause about having themselves and their families vaccinated. An article in the Cambridge Chronicle describes the “attempted suicide” of a 34-year-old Cambridge man who had been healthy in body and mind until consuming nitric acid soon after receiving his vaccination. News of the 1902 death of a young girl in Buffalo, New York, also reached Cambridge; although the Sturdevant family ultimately lost their lawsuit against the Buffalo health department over their daughter Lucile’s death after being vaccinated at her public elementary school, the story of her death spread far, adding fuel to the anti-vaccine fire.

By June 1902, the rate of smallpox infection had reached a level that prompted Cambridge officials to close the schools and the public library, and to order church services to be canceled. Previously, Cambridge had been reluctant to enforce the legal penalties associated with vaccine noncompliance, but following these closings, the Cambridge Tribune quoted mayor John McNamee as declaring that “the first person who refuses to be vaccinated will be immediately called into court.” Little did McNamee know that it would be one of his own co-workers among the first to be prosecuted under the city’s crackdown. Albert Pear was the assistant Cambridge city clerk; Pear, along with several other co-defendants, received a summons in July to appear in court for refusing to be vaccinated.

At the end of July, Pear’s case was decided on the local level and he was fined $5 for failure to comply with the vaccine mandate – around $160 when adjusted to today’s dollars. Pear’s case became a lightning rod for supporters and opponents of mandatory vaccination in Cambridge and beyond, but the state Superior Court handed down a decision in April 1903 declaring that compulsory vaccination laws are constitutional. The court argued that, although there may be individual cases in which vaccination causes illness or even death, their small numbers in comparison with the overwhelming public good of requiring smallpox vaccination far outweighs the danger of allowing segments of the population to remain unvaccinated. Another case that started in Cambridge, Jacobson v. Massachusetts, went to the Supreme Court in 1904, but a ruling the next year agreed that the city’s vaccine requirements were reasonable.

As we move toward 2022 with Covid still looming large on the horizon, what can we learn from our city’s experiences more than a hundred years ago, and how can understanding the complex social dynamics of the smallpox era help us to better navigate the current pandemic as residents of a dynamic and diverse community?

Want to know more? Read the full story on the History Cambridge website.

Feature image shows vaccinations in the early 1990s in an image held by the National Library of Medicine.