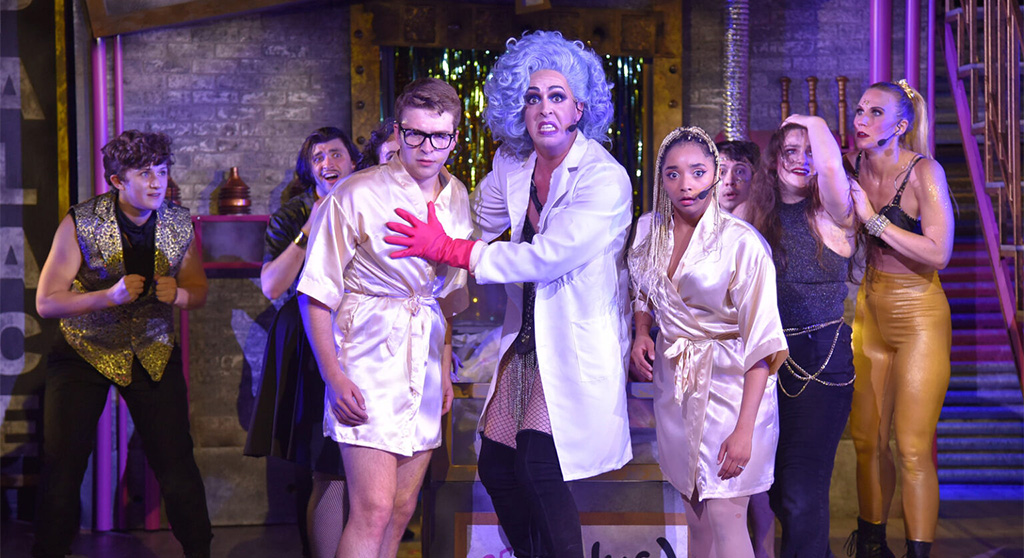 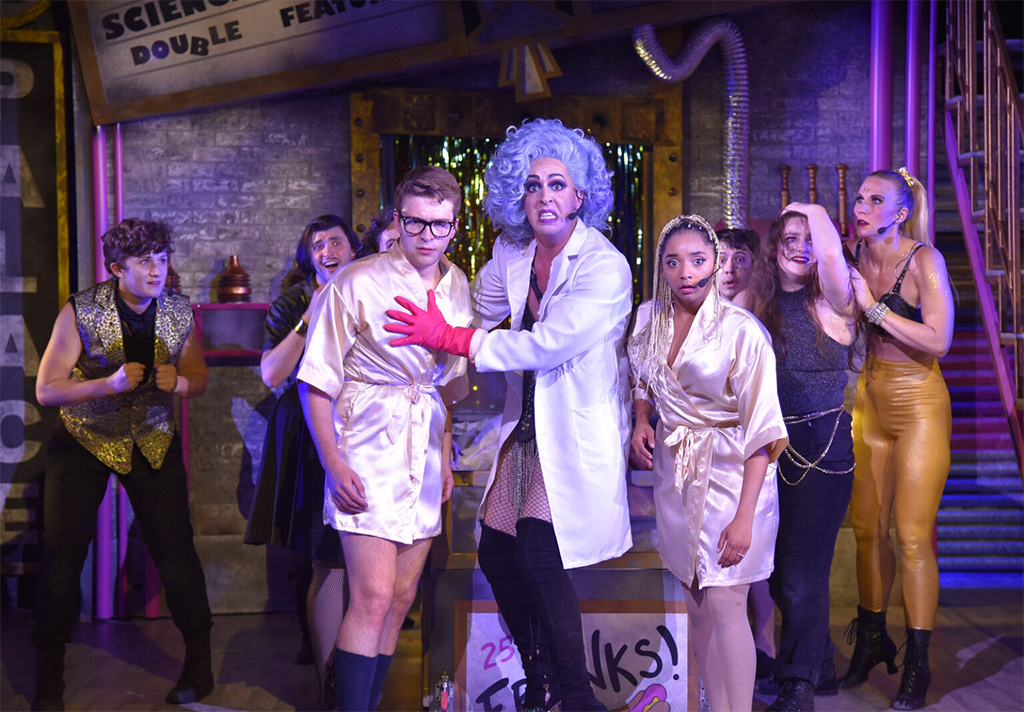 Moonbox Productions has emerged from the 18-month in-person theater blackout with an encore presentation of “The Rocky Horror Show,” a production that brings back all of the twisted fun of the movie version that ran at the Harvard Square theater for 28 years.

As a lover of all those things, it was a trip to be transported back to the 1970s when my suburban friends and I traveled into Harvard Square to see the cult film for the first time. With half the audience dressed in drag or other outlandish costumes from the movie and the “shadow actors” lip-syncing and acting it out while the movie was playing behind them, it was a culture shock and a mind-opening entertainment experience – not unlike the Boston punk scene that soon followed. When the usherette opens the show with the dreamy doo-wop of “Science Fiction/Double Feature,” with its references to both the good and awful 1050s sci-fi films, I was beamed back to my youth.

For those who aren’t familiar with the film or stage version (which was first performed at the Royal Court Theatre in London in 1973, the film in 1975), it spins the tale of innocent young lovers Brad Majors (Ryan Norton) and his fiancée Janet Weiss (Christina Jones). They get a flat tire in a raging thunderstorm and are forced to seek help at a spooky castle down the road, accompanied by the gorgeous ballad, “Over at the Frankenstein Place” sung beautifully by Jones and Norton and the “phantoms” – the play’s singer/dancers. When they arrive, they’re greeted by the creepy denizens of the joint: Riff Raff (Kevin Hanley), Magenta, (Lori L’Italien, who also plays the usherette), Columbia (Shalyn Grow) and the rest of the cast, and are soon sucked into a dance party in the night’s rockingest number “The Time Warp,” a Busby Berkeley-on-amyl nitrate-style extravaganza featuring an electric tap sequence by Grow.

That sets the stage for the entrance of Dr. Frank ’N’ Furter (Peter Mill, in a smashing return to the role) in pink faux fur over a leather bustier and fishnet stockings and heels. The coke-snorting, pansexual “sweet transvestite from Transexual, Transylvania,” belts out a pair of numbers with the cast, “Sweet Transvestite” and “I’m Going to make You a Man.” The latter introduces us to his latest creation from the lab, Rocky (Jack Manning), a hunk boy version of Frankenstein’s monster destined (maybe) to be the mad scientist’s newest beau, but not until Frank first seduces Brad and Janet, turning their life plans upside down. There’s a subplot about Eddie (Shonna Cirone) being murdered, but I’ve always felt that by this point in the play, the plot was just a serving tray for the musical numbers rather than anything worth following too closely. But who cares? The enthusiasm of the cast, the imaginative choreography by Dan Forest Sullivan (assisted by Joy Clark and dance captain/phantom Janis Hudson) and the kick-ass band led by Mindy Cimini keep the show rocking.

Moonbox staged this show in 2019 at the same location, installing bleachers on either side of the stage; this time it’s reconfigured the space into a more conventional theater space that allows the performers a safe distance from the audience. A number of cast members returned for this production (Mill, Cirone, L’Italien, Hudson, Alex Jacobs as the Narrator, and Grow, formerly a phantom), and they again light it up. Mill is as good comically with his over-the-top Frank ’N’ Furter as he is with his powerhouse pipes, and L’Italien brings an edgy biker chick mentality to the role of Magenta in addition to her solid vocals, especially in the show’s opening number.

But as we saw in the terrific production of “Parade” (also in 2019), Moonbox has a knack for uncovering new talent, this time snagging Jones and Norton out of the Boston Conservatory for the roles of Janet and Brad. In addition to her excellent vocals, Jones exhibits a nice comic flair, particularly during the “Time Warp” number when her priceless facial expressions make it appear that she is being sucked into the dance against her will. Norton absolutely kills it on the ballad, “Once in a While.”

As we take our tentative first steps back into the theater, thanks to masks and proof-of-vaccination mandates, Moonbox shows us “There’s a light in the darkness” with this terrific “Rocky Horror” revival. See it.