Grievances dating back to 2019 roil campaigns, and candidates say the debate online is nastier

Grievances dating back to 2019 roil campaigns, and candidates say the debate online is nastier 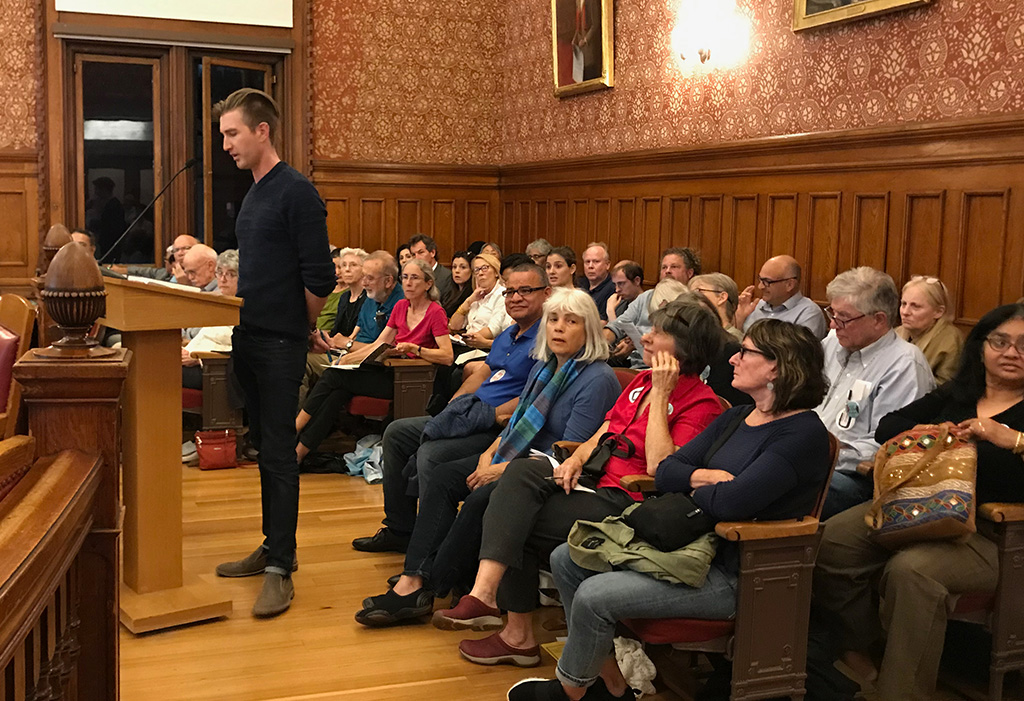 Online discourse around the year’s City Council race has become increasingly hostile in the run-up to Tuesday’s final voting, with candidates caught in the crossfire calling it more personal and less substantive than in years past. In one of the most prominent controversies of the campaign season, they are just endorsees of an group that itself is under fire for a year-old incident that began with a different organization.

The issue took visual form in a Sept. 25 tweet by resident Elia Robyn Speer of a diagram she’d created showing candidates grouped by which organizations had endorsed them. The attributes for the four candidates endorsed by the Cambridge Citizens Coalition: “homeowners, homophobia, exclusion.” This, and later versions, garnered more than 200 likes and dozens of retweets.

Speer’s charge goes back to a 2020 incident that did not, initially, have anything to do with the CCC, let alone the council candidates it endorsed. 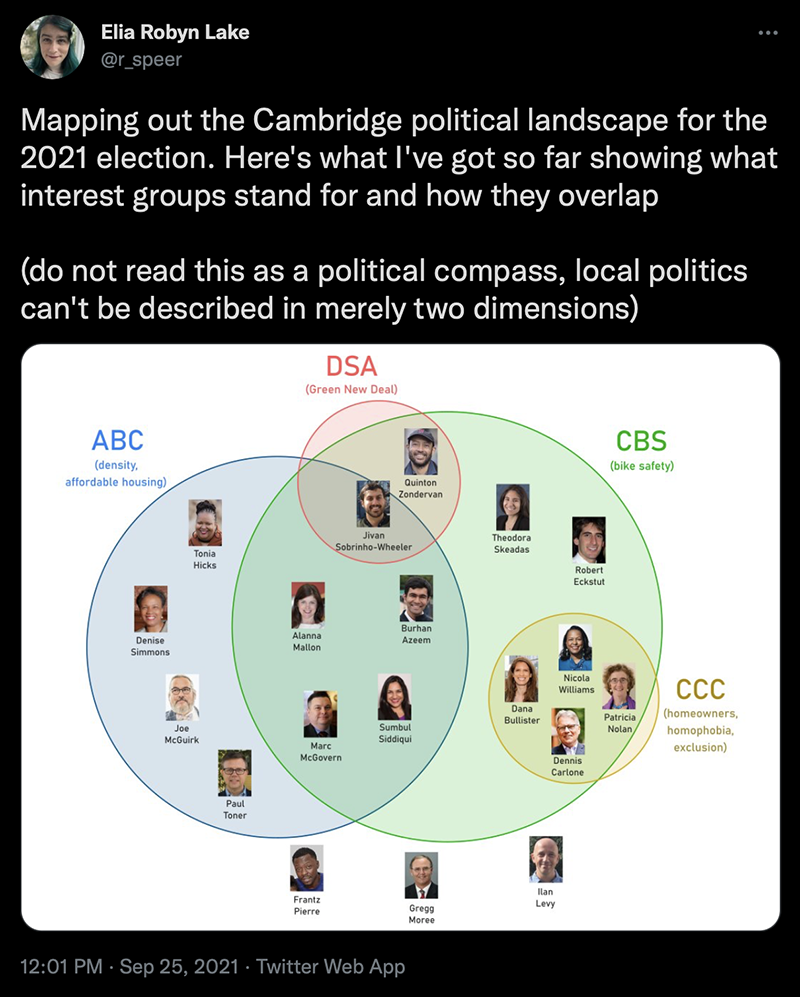 A tweet in September used Medium posts by Loren Crowe as a source.

Her source was a series of blog posts by resident Loren Crowe titled “A fair but partial account of the Cambridge Citizens Coalitions’ activities since 2019.” The third in the series recounts how an East Cambridge Planning Team board member joked last year in a group email list about Crowe’s menswear store on Etsy, attaching a photo to say Crowe looked “ripped in that medieval leather thong.” According to Crowe, Suzanne Blier – president of the CCC – and others in the coalition unnecessarily involved themselves in this incident by “victim-blaming” and using the moment to attack him for his agenda.

Beyond expounding on this personally “painful” incident, Crowe’s blog posts claim that the group and its leadership have spread misinformation, taken donations from someone with a record of racist writings and used exclusionary or racially coded language. Each installment urges readers to withhold their votes from the CCC-endorsed candidates.

“The blog is getting pretty good traffic. The tweets are pretty widely shared,” Crowe said this week. “There are dozens of people who’ve reached out to me saying that they didn’t know about these things and are grateful that they know now. There are candidates who reached out to me who said that they wouldn’t be attending CCC’s candidate forum.”

Reactions by the endorsed

After reading and reviewing the blog posts, Dana Bullister – a first-time candidate endorsed by the CCC – said she felt “really, really crushed.” “I was extremely ashamed that I hadn’t done more due diligence in finding out more on the past history of these events,” she said. “Never in my whole life has it been my intention to promote toxicity or homophobia or ad hominem attacks in public discussion.” She added that the charges of misinformation were especially affronting to her as a policy analyst.

Bullister released an Oct. 2 statement in which she clarified her values and stances as a candidate but did not reject the endorsement, in keeping with a promise she made to the coalition. Crowe lauded her for her “integrity” on his blog and called on the other CCC-endorsed candidates to follow her lead.

None of the others – Dennis Carlone, Patty Nolan and Nicola Williams – have made similar moves to distance themselves from the coalition. 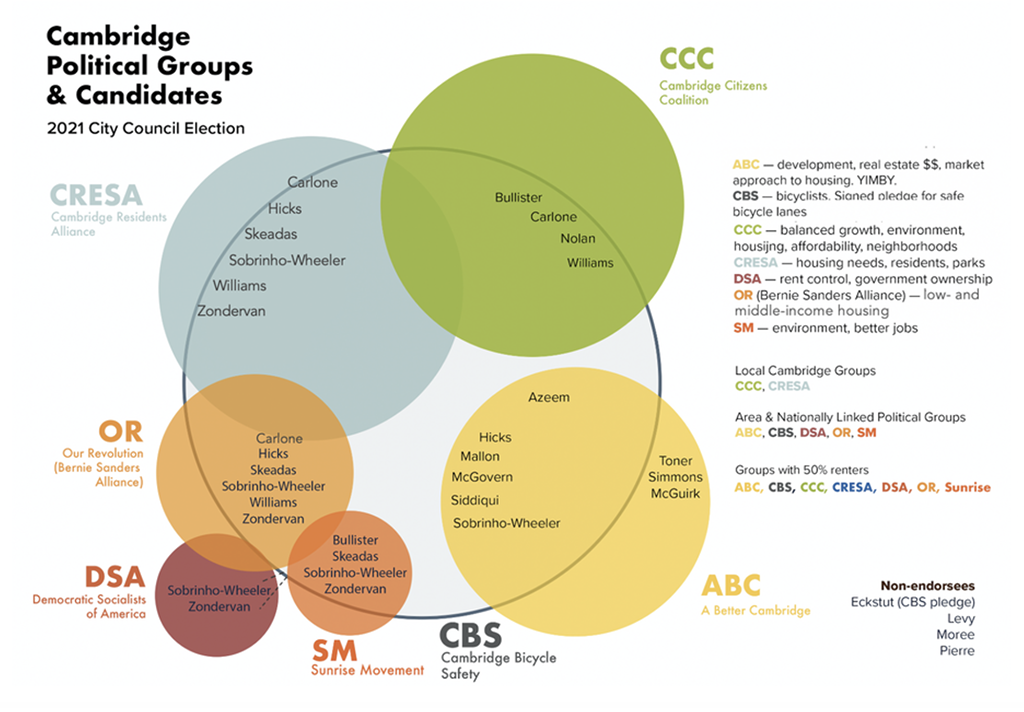 The Cambridge Citizens Coalition posted its own diagram of endorsements on its website.

Carlone maintained that the ECPT incident was irrelevant to the current election, or his acceptance of the CCC’s endorsement. “You will find people throw a bomb into the middle of the campaign on something that was a year or two ago,” he said. “That’s past, that’s history. And it was bad, and it’s over. And to think that that affects an endorsement is just ludicrous.”

He accepts all neighborhood endorsements because he has “helped 15 different neighborhood groups dealing with challenges in zoning and design review and getting more open space. That’s the real issue in this election. Not one person’s vendetta,” he continued. “Who is throwing out these bombs, and why? That’s my question, and it just happens to be before an election.”

Carlone’s fellow incumbent Nolan suggested that many who have promoted Crowe’s anti-CCC content are affiliated with the group A Better Cambridge, which opposes the CCC on development strategies.

“There’s a whole attack thread on Twitter going on about ‘Don’t vote for any of the CCC people’ … Several people very closely affiliated with ABC have either promoted it or retweeted or liked it,” Nolan said. “I was not endorsed by ABC, but I don’t trash them … because I think they’re a legitimate organization. Whereas the other side seems to think CCC isn’t even a legitimate organization, when they’re comprised of a lot of people with a long history of working on behalf of the citizens of Cambridge and volunteering their time.”

Crowe noted in an email that he is not a member of ABC, has not attended any of their meetings and has not donated to the group. “I have friends in ABC, along with [Our Revolution Cambridge], the [Democratic Socialists of America], [Cambridge Residents Alliance], the Cyclists’ Union and most groups in town,” he said. “I live here, after all.”

ABC, asked about the clashes, didn’t address the involvement of people affiliated with it.“We value and appreciate the contributions of everyone running, including the candidates we haven’t endorsed. Everyone in Cambridge should be free to express their views, and should be held accountable if that expression is harmful,” Allan Sadun wrote by email for the group. 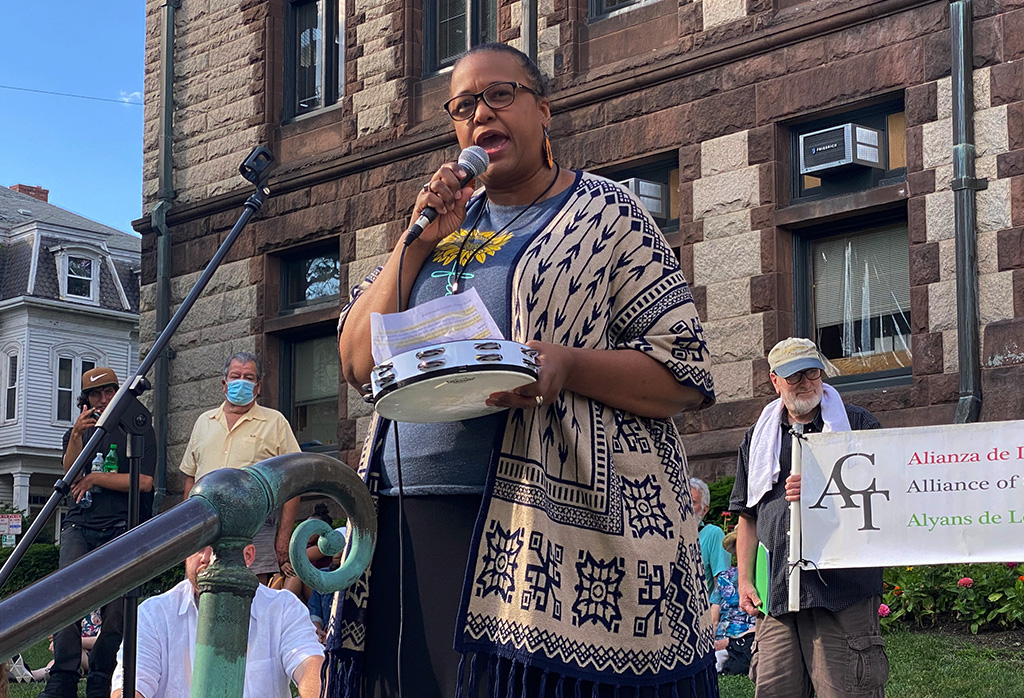 Williams, who said she is running on a platform of equity, expressed frustration that as a CCC-endorsed candidate she was being maligned as perpetuating exclusion. And she too saw an organized effort behind the attacks. “As a Black woman, I’ve seen how social media can be a place where hate and vitriol have a place to thrive,” she said. “I have chosen to disengage on Twitter, because if my opinion doesn’t align with the views of an opposing organization, they will feel free to attack me – not just once, but continuously, for days, non-stop. It ends up becoming trolling.”

“I think that some tactics taken by some organizations represented by Mr. Crowe – they’ve always used Twitter as a way to attack people,” she continued.

Right up to the final weekend before Election Day, Blier, said she saw a familiar pattern at play in which Crowe is used as a “surrogate hit man” online with the support of the ABC.

“On this and other issues, Twitter has become a site of striking vitriol and misinformation. But it is not entirely new to the current election cycle,” Blier continued. “This same group of ABC social media provocateurs has also leveled blistering attacks not only at council candidates … but also members of the Planning Board, [Board of Zoning Appeal], Cambridge Historical Commission and private citizens who comment during meetings in ways that counter ABC’s views. This kind of Internet bullying has no place in civil society.”

“The charges against CCC and our endorsees are unfair and based on mischaracterizations, distortions, and factual errors made even more problematic because of their political motivations,” Blier said. 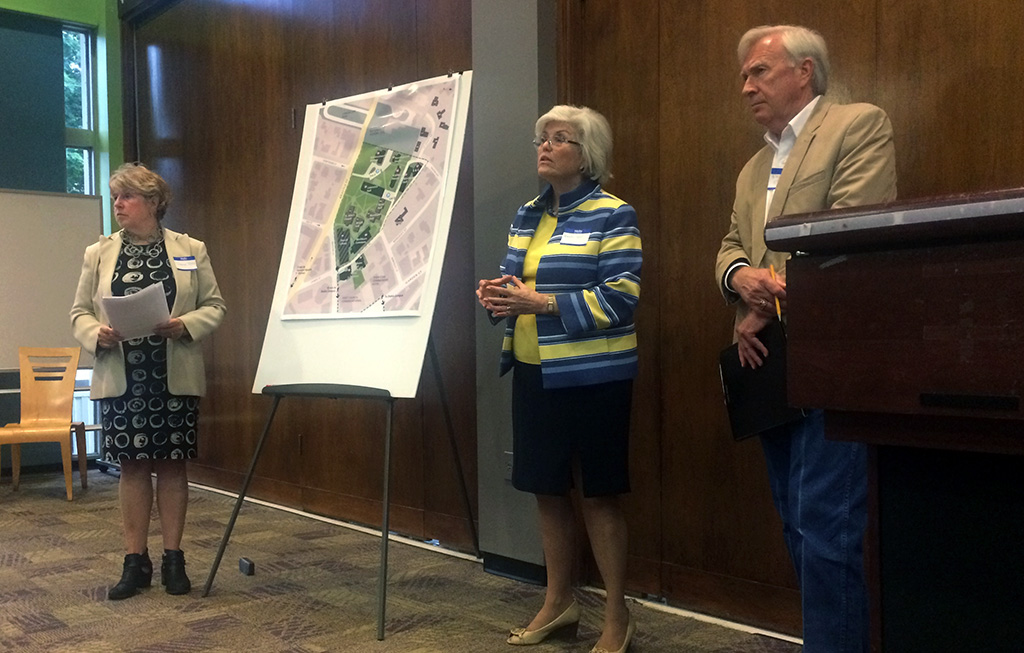 Even if harsh debate online isn’t new, the candidates think this election season has seen an uptick in antagonism. “Last election there were personal attacks directed at me, and others … it seems this election there is more negative campaigning and personal attacks instead of focusing on policy differences,” Nolan said. “And more social media posts that assert positions or stances that are not substantiated, and do not advance civic engagement or debate.”

Williams agreed that “It’s more vicious this year.” Carlone said the campaign season has been “interestingly different,” with more attacks via social media taking the place of “vocal negativity.” “I don’t pay attention to them. I know attacks are counterproductive for any city that desires to move forward. I suspect it is a continuation of the previous president’s approach to politics,” Carlone said.

Crowe, meanwhile, said that “none of the CCC-endorsed candidates’ responses do anything to rebut the facts that I’ve presented. They simply guess at my motives, which are, in truth, simple: these events happened, they are newsworthy in light of the election, they caused a significant amount of pain, and I want my community to do better.”

This is the first municipal election since the East Cambridge Planning Team incident, although Crowe’s charges against the CCC date back to the summer of 2019.

“This isn’t just about me or one incident,” Crowe contended in an email. “It’s about a pattern of behavior across the life of the organization and around the political activities of a core group of people.”

Still, the starkest allegation against the CCC and their endorsees springs from the Oct. 19, 2020, comment, which Crowe described as a “homophobic and sexually harassing attack.” It led to a council order that would condemn the conduct and begin exploring greater involvement in and oversight of community groups – and an objection to that effort by Blier that the council order “leaves out … that Mr. Crowe frequently attacks others who oppose his radical views.” She accused Crowe of “monetizing this situation” by publishing “the same and other similar photos of himself (and the attire he sells)” on Twitter and elsewhere.

But if some see ABC involvement in Crowe’s advocacy, he says the same of the Citizens Coalition: “Everyone who attacked me personally in the aftermath of this incident, who tried to blame me for my own sexual harassment, was affiliated with CCC,” he wrote in his blog.

In a Friday letter to the editor, the Citizens Coalition leadership wrote that – according to a founding member who belongs to the Massachusetts LGBTQ Bar Association – the original incident “was not homophobic because LGBTQ issues were not involved.” The letter continues that “falsely accusing individuals of homophobia is hate speech that diminishes the real pain of homophobic attacks everywhere. It is time to move beyond this spectacle of political bullying to address the many serious issues facing the city.”

Nolan and Carlone signed on to a council order last year that described the Oct. 19 statement as homophobic, which Crowe suggested was contradictory.

In a tweeted response to the letter, he said Nolan and Carlone “need to clarify their position ASAP. Do they stand with their previous votes condemning obvious homophobia, or with CCC and say that mocking a gay man after finding photos of him wearing gender divergent clothing isn’t homophobic somehow?”

Speer’s diagram of candidates showed Crowe’s critique has the attention of some voters. But Speer did not respond directly to a request to speak with Cambridge Day.

“A certain newspaper sent me an email about my accurately labeled diagram,” she tweeted instead. “Who knew that the ability to draw circles in Inkscape gave me such political influence?”

By Oct. 13, though, she had updated the diagram’s labels. Instead of naming a group of candidates as “homophobic,” the new version said it “tolerates homophobic attacks.”