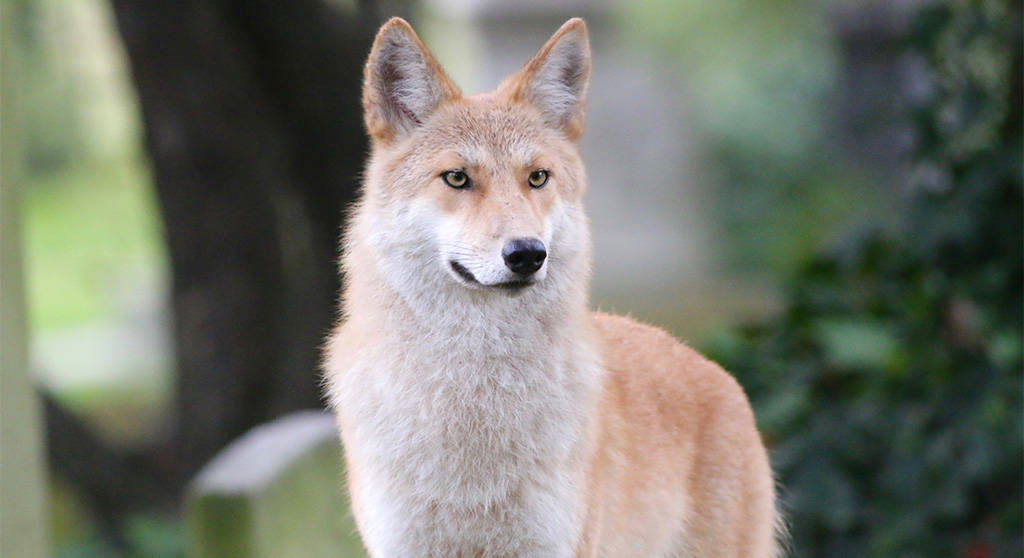 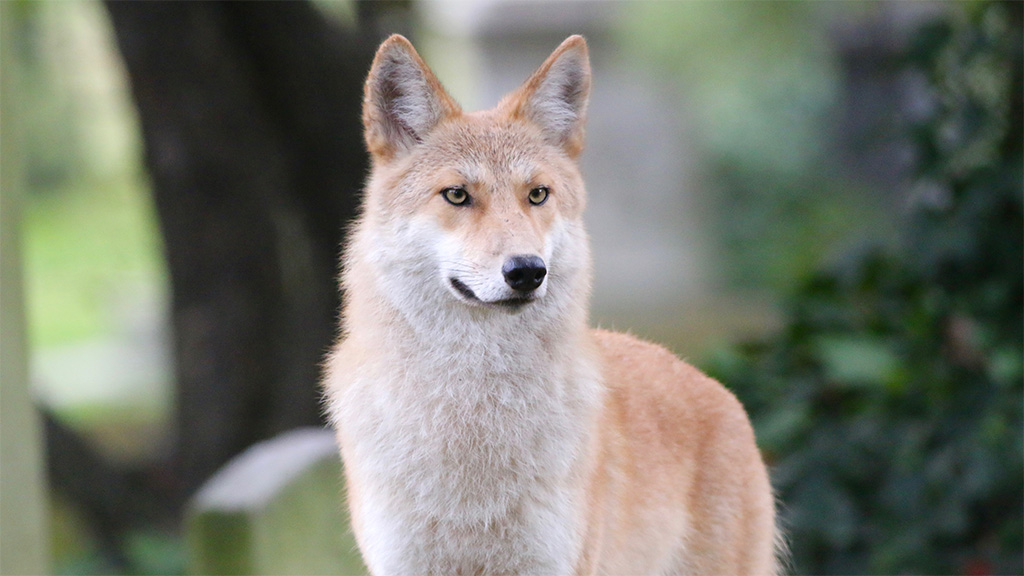 A reddish coyote spotted near the western border of Cambridge. (Photo: Brian Rusnica)

Coyotes have lived in the western part of North America for a very long time but are relative newcomers to the Northeast, where they’re much in the news these days. But why are they so conspicuous at this time of year, since they live here year-round? Perhaps the answer lies in September through November being when young coyotes leave the den to establish territories for themselves. These coyotes travel great distances and explore new areas trying to find a satisfactory location to set up shop.

You may have heard that coyotes here in the Northeast are a little larger than in the west. Genetic tests show that eastern coyotes are 8 percent to 25 percent wolf and 8 percent to 11 percent dog. There are no coyotes that are solely coyote and wolf (so the term coywolf is a misnomer), although some eastern coyotes have almost no wolf in them at all. Eastern coyotes today do not interbreed with either dogs or wolves, though, and the species tend to avoid each other under normal circumstances. Some interbreeding did occur before recorded history; the gene for the black coat color found in wolves and coyotes today came from the dogs of the earliest indigenous Americans, and color variations in coyotes are the most obvious sign of dog genes.

DNA analysis shows that U.S. coyotes mated with wolves more than 100 years ago. (A century ago, gray wolf populations in the continental United States were very low, and when a population is low, animals will breed with other species if they cannot find a mate of their own species.)

Some interbreeding with dogs has occurred more recently: It is speculated that coyotes mated with dogs when the first wave of female coyotes traveled north around the Great Lakes and moved into upstate New York in the 1930s, likely encountering feral dogs but few male coyotes. Coyotes were first reported in Vermont, New Hampshire and Maine in the 1940s and in Massachusetts and Connecticut in the mid-1950s.

Today, coyotes in our region easily find other coyotes to mate with, so there is virtually no interbreeding. 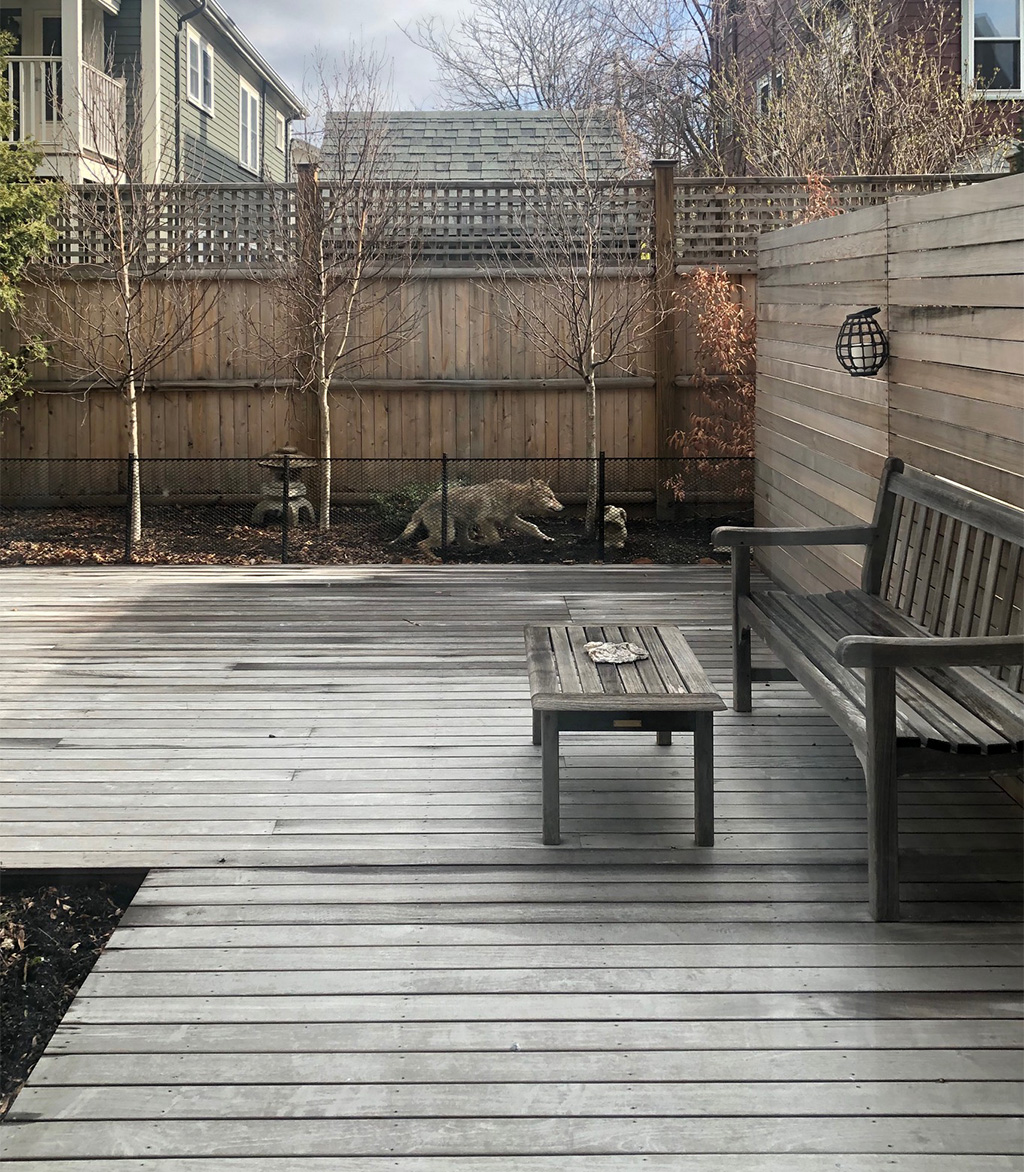 A juvenile coyote in an Observatory Hill backyard near where Concord and Huron avenues meet, early March 31, 2020. (Photo: Susan Evans)

This is despite the fact that more than 400,000 coyotes are killed each year in this country – which often backfires, because when their population density decreases, coyote youngsters mature faster and females produce larger litters. In addition, when a new territory becomes available, several coyote pairs may move in and divide the territory into smaller units.

Despite the fact that coyotes are one of the most persecuted animals in the United States, they have increased their North American range by 40 percent since the 1950s. They now live in every state except Hawaii – an increase propelled by the slaughter of wolves, the collapse of the coyote pelt market and deforestation, among other things. They have worked their way so far south in the Americas that they have reached the nation of Panama and seem poised to spread into Colombia, and from there the rest of South America. Coyotes along this leading edge may be interbreeding with dogs again, as photos indicate that these coyotes have shortened tails, doglike muzzles and varying coat patterns.

Dogs, however, do not make good mates for coyotes. Coyote males and females work together to hunt for and raise their young; they are monogamous and extremely loyal to their mates for life. A dog, on the other hand, abandons a female coyote after mating, leaving the female to raise the pups alone. 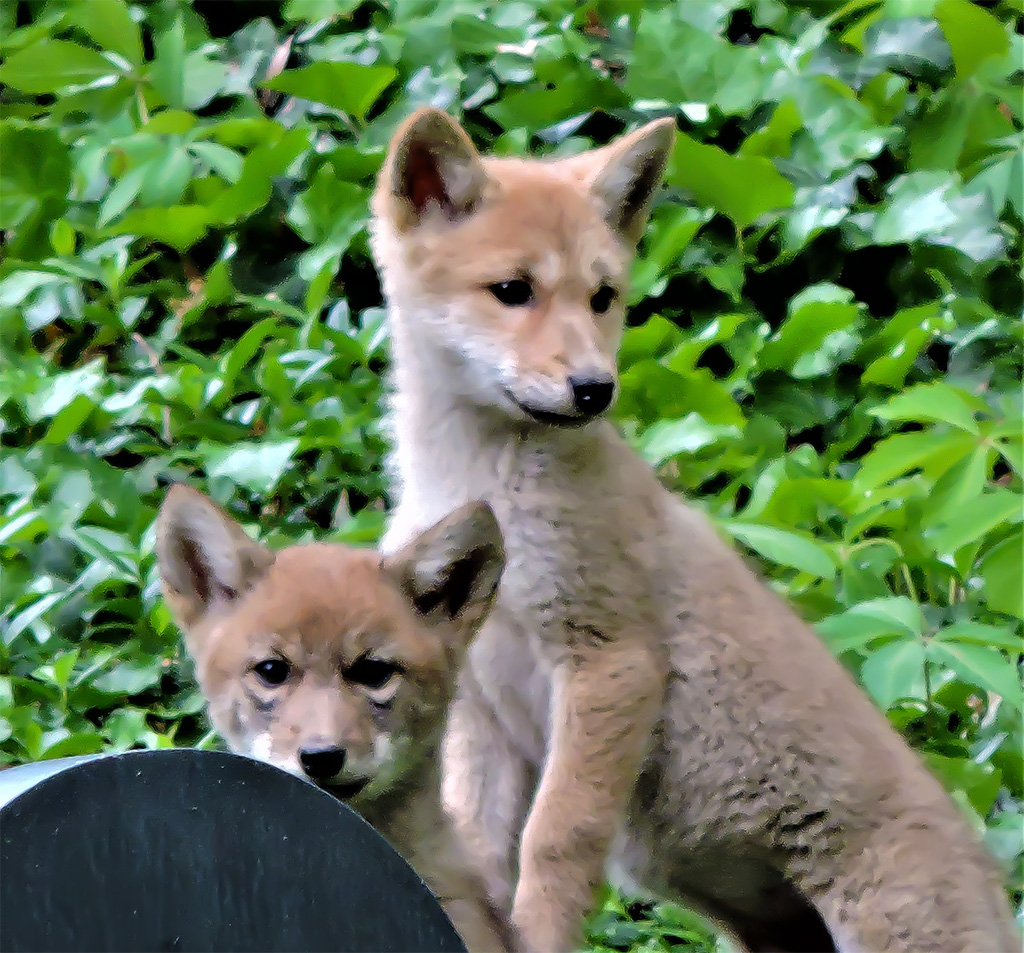 An adult male and female coyote will work together to maintain a scent-marked territory from 2 to 30 square miles. They breed in January through March and pups are born in April or May. In the fall, the male coyotes leave the den to establish their own territories. Sometimes females stay with the parents and help to raise the next generation. Coyotes do not hibernate and are active all year-round.

Eastern coyotes live throughout the cities, towns, suburbs and rural areas of Massachusetts, including some islands such as Martha’s Vineyard. They are omnivores who will eat almost anything, but rodents make up at least 75 percent of their diet. Coyotes help to control rodent populations in urban areas – one coyote will eat about 1,800 rodents per year, according to former Belmont animal control officer John Maguranis, the Massachusetts representative for the nonprofit Project Coyote. It is thought that coyotes may also help to slow the spread of Lyme disease by preying upon the white-footed mouse, the primary carrier of the Lyme disease bacteria. (The disease is spread when tick larvae feed on infected mice and then later bite humans.)

Eastern coyote females weigh only 33 to 40 pounds, while the males usually weigh 34 to 47 pounds. Eastern coyotes often appear bigger than they are because they have a great deal of thick, fluffy fur. 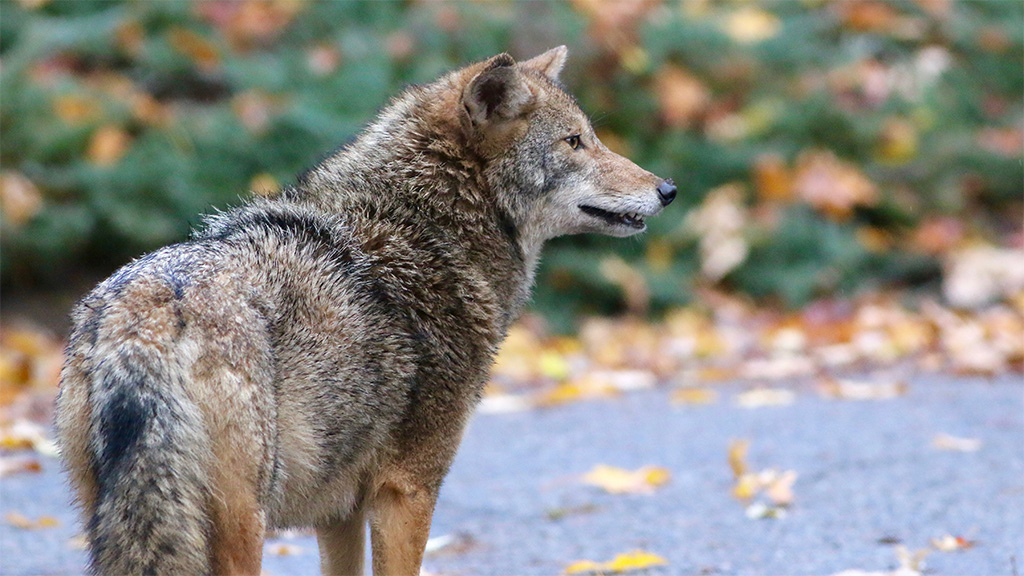 A coyote pauses on a path in Cambridge. (Photo: Brian Rusnica)

Coyotes howl for many reasons, including to warn others to stay out of their territory, to find family members in their territory or to find a mate. When there is a threat to the pups, the adults will scatter and howl to lure the intruder away from the den. Pups like to practice howling and can be quite vocal in late summer. When a family of coyotes howls together, it can sound as if the group is much larger than it really is.

Coyotes are not nocturnal by nature, but urban coyotes avoid people as much as possible, so they have altered their natural habits. Urban coyotes are often out near dusk, at night and in the dawn and predawn hours.

The word coyote comes from the Nahuatl (Aztec) word coyotl, which means “trickster.” Coyotes are smart and resourceful, and we owe it to them to coexist peacefully, because they are here to stay. Coyotes are usually skittish and avoid people, but they can become habituated if they begin to associate people with food, such as pet food left outside, unsecured garbage or handouts. Habituated coyotes may approach people and exhibit aggressive behaviors; hazing them can teach them to fear humans again. Maguranis recently presented a coyote webinar that includes information on how to haze coyotes properly – most people do not – as well as other information for people living with coyotes in our area.