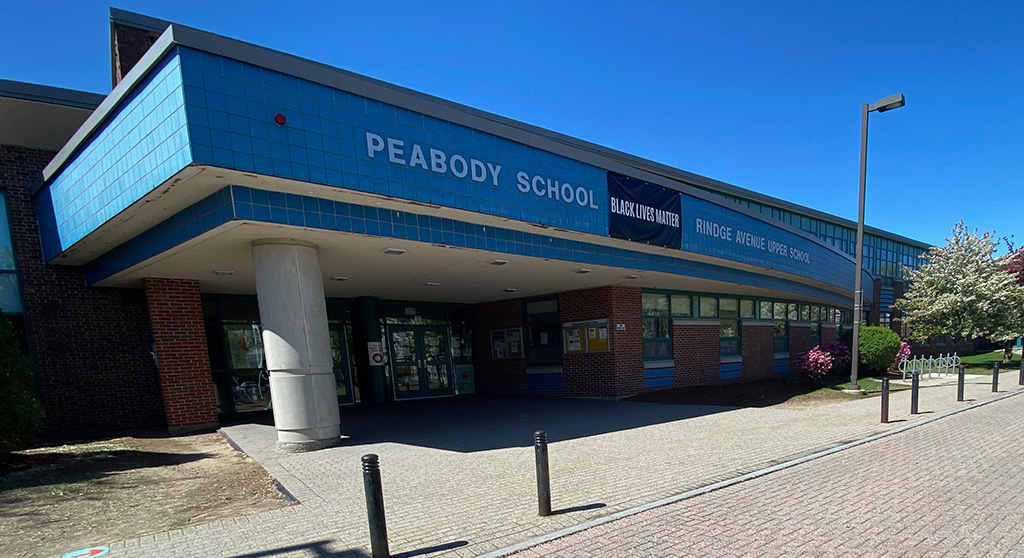 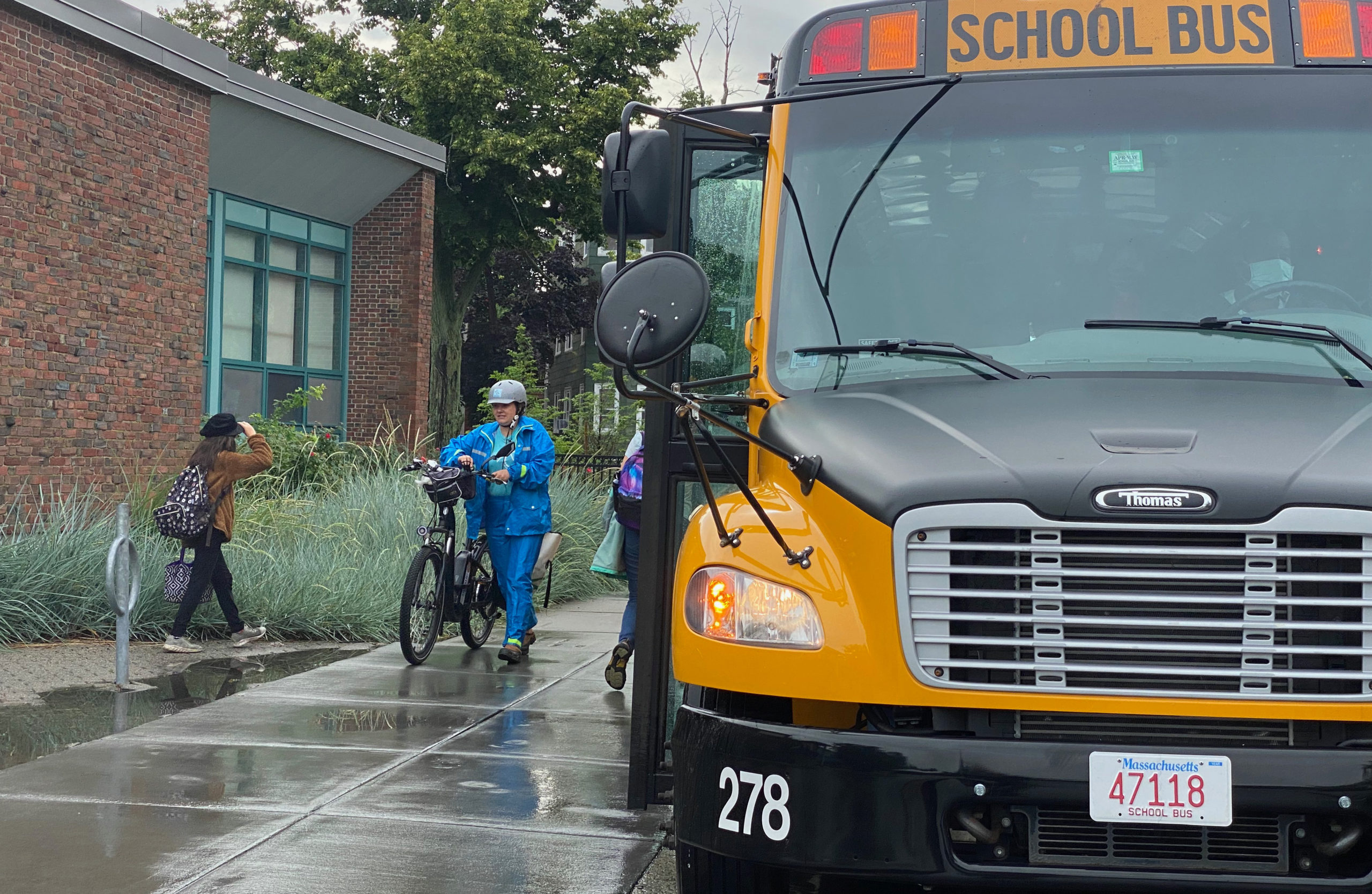 A bus stops at The Peabody School on July 9. The school now leads on Covid cases. (Photo: Marc Levy)

Public and private health care providers in Cambridge are preparing to vaccinate children from 5 to 11 years old against Covid-19 now that federal authorities have approved the Pfizer vaccine for that age group, with the earliest target date for most clinics on Monday. Health officials and many parents had awaited the approval eagerly now that children are back in school with no vaccine protection for the youngest age groups.

Since Cambridge public schools opened in September, there have been 37 confirmed infections among in-person students and 15 among employees, the school department reported Thursday. The department’s data dashboard said four cases were caused by in-school transmission, with no details about whether those infections occurred among students or staff. According to the dashboard, the Peabody School had the highest number of cases – 11 – with Cambridge Rindge and Latin School, the high school, second with nine cases. Peabody serves kids up to fifth grade, or 10 years old. There was no information about whether the cases in individual schools were in students or staff.

School department employees must be vaccinated or, if not, tested daily. Students also have a mandate of sorts; they must be vaccinated by Nov. 22, if eligible, to participate in sports and other extracurricular activities. It’s not clear how the schools will deal with newly eligible younger students.

The Cambridge Health Alliance will offer shots to children starting Monday at its vaccination clinic at 176 Somerville Ave., Somerville. Appointments and walk-ins are available, spokesperson David Cecere said. Any Massachusetts resident can get a shot there. CHA patients can make appointments at the Alliance’s online portal, MyChart, and the health care system is working to have its site included in the state’s VaxFinder site, Cecere said.

Not far behind, the Cambridge Public Health Department will accept children as well as adults at its previously scheduled flu and Covid-19 vaccine clinic from 3:30 to 7:30 p.m. Wednesday at the King Open School, 850 Cambridge St., Wellington-Harrington. The department asked parents trying to make appointments for their children now to be patient because the state Department of Public Health must modify the appointment-scheduling system, Color, to accept the lower age groups. Color Health is a private software company.

CVS and Walgreen’s pharmacies said on their websites that they are offering Pfizer shots to children from 5 to 11 years old at “selected locations.” This reporter tried on Thursday to schedule appointments at CVS and found nothing available in Cambridge; the earliest time with slots was next week in Boston. The first available appointments at Walgreens were on Nov. 15, in Somerville

Atrius Health, the big physicians group with two offices in Cambridge, said parents can start scheduling vaccination appointments for their children Nov. 12. Atrius will offer the shots at clinics at 14 locations starting Nov. 15. The Atrius website didn’t identify the locations. Atrius also said in another announcement that it has “paused” all other Covid-19 vaccinations. A spokesperson didn’t immediately provide details.

Mount Auburn Hospital is working on plans to vaccinate kids in pediatricians’ offices associated with the hospital and is not ready to announce any specifics.

Meanwhile, the city’s Covid-19 rate of new cases continued to fall, while the percentage of eligible residents vaccinated did not change after inching up last week – to 70 percent from 69 percent. The Cambridge Public Health Department also reported a Covid-19 death on Wednesday, a man in his 50s who had been hospitalized, health department spokesperson Dawn Baxter said. A total of 126 residents have died of the virus, three in the past two months.

Sue Breen, the city’s interim chief public health officer, told city councillors Monday that the time isn’t right to relax precautions such as the requirement to wear masks indoors in public spaces. Pointing to a graph of new-case rates, she said that “probably the most significant thing here is the up and down pattern … in terms of … lack of stability of maintaining a downward trend.”

After the city imposed the indoor mask mandate, the case rate dropped – then increased, Breen said. “And now we are down on a downward trend,” she said. “What I’d like to point out and reiterate, and I think this is where we need all of our patience, we are coming into the season of friends and families and gatherings. It is really at this time that we want to keep a close eye on what this virus is doing.”

To prepare for the holiday season and an expected higher demand for testing, the city is talking to a private vendor, CIC Health, about staffing a fifth testing site at the Christian Life Center on Bishop Allen Drive in Central Square, City Manager Louis A. DePasquale said. The city now offers free tests in Harvard Square on Sundays; St. John the Evangelist Church in North Cambridge on Wednesdays; and the CambridgeSide mall in East Cambridge on Mondays and Thursdays. People on foot or bicycles can now get tested at the mall; in October it was restricted to drivers.

Students must soon show proof of vaccination for extracurriculars and sports, committee says