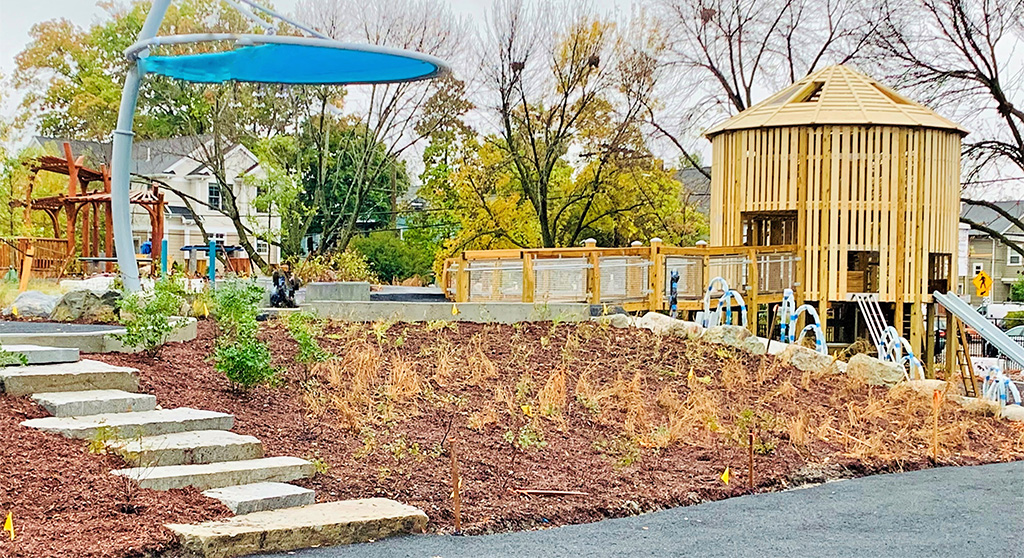 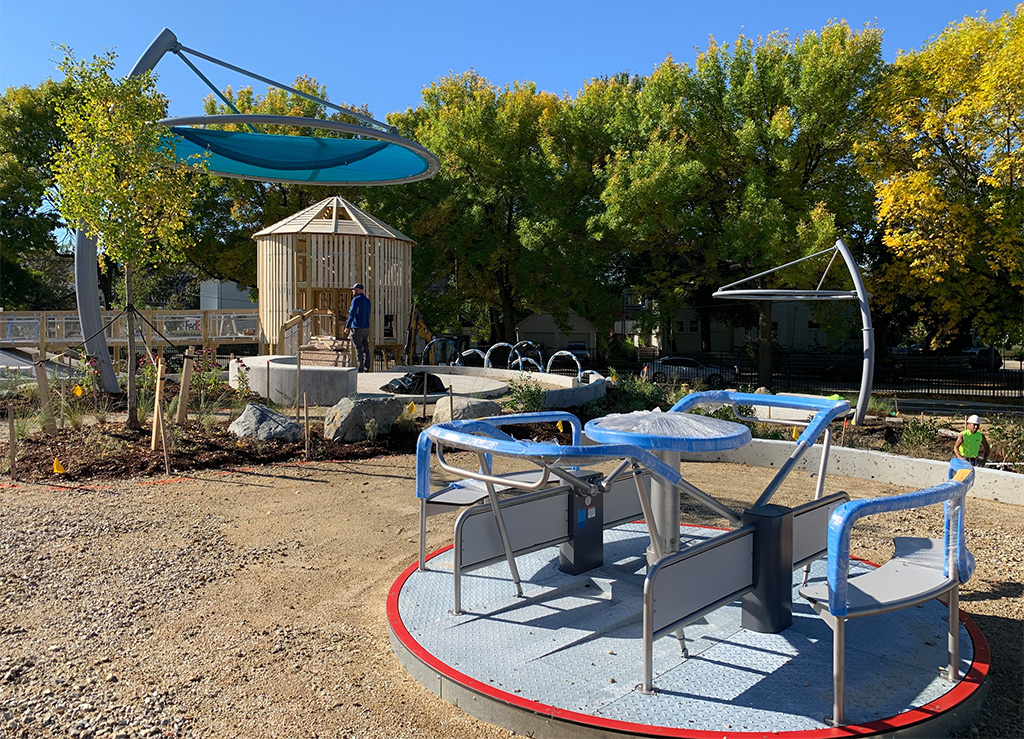 The Universal Design playground at Danehy Park named after City Manager Louis A. DePasquale as of a Monday vote by the City Council. (Photo; City of Cambridge)

Despite her work making sure public art, monuments and historic markers prioritize anti-racism, equity, diversity and inclusion, city councillor E. Denise Simmons said an attempt to include a disability rights advocate of Eritrean descent – and the first deaf and blind person to graduate from Harvard Law School – in a playground naming “just doesn’t sit right with me.”

The proposal could be part of a political game and was being perceived as tokenism, she said Monday.

Simmons made a motion Nov. 8 to name a new playground at Danehy Park for City Manager Louis A. DePasquale, but the order was held for a week by councillor Jivan Sobrinho-Wheeler using his “charter right.” He explained his concern was that the naming, considering the dedication of a park named after retiring councillor Tim Toomey the previous month, only exacerbated an issue Simmons has called out in the past: how many public amenities are named after white men in Cambridge, and how few for anyone else.

If DePasquale shared the naming honor with another person, following the model of the city’s Greene-Rose Heritage Park or Kennedy-Longfellow School, “we could help increase the diversity of naming of our parks and potentially also recognize someone who has been an advocate for increasing accessibility, like the [new] Universal Design playground seeks to do,” Sobrinho-Wheeler said.

His suggestion was Haben Girma, the disability rights advocate, as someone with a connection to Cambridge, but noted that his proposed amendment to Simmons’ order “doesn’t require that it be a particular person.”

The proposal was not embraced. “While on one hand I do appreciate the suggestion, I might admit that I’m uncomfortable with the idea of a woman or minority being brought up almost as an afterthought in this way. And in speaking with other women in Cambridge, particularly black and brown women, I’ve learned that others share this sentiment. I did not want to suggest that this was councillor Sobrinho-Wheeler’s intention. But something about the way this woman’s name was suddenly added to the mix at the very last minute almost cheapens the honor that is supposed to come with this distinction,” Simmons said. “Something about it just doesn’t sit right with me.”

Despite the reference to Sobrinho-Wheeler’s proposal coming “at the very last minute,” Simmons had already acknowledged her appreciation to him for “reaching out to me last week with the proposal,” allowing her time to survey other people for their reaction. Councillor Patty Nolan said that it was Simmons’ own Nov. 8 order proposing the honor for DePasquale that had caught her by surprise a week ago. 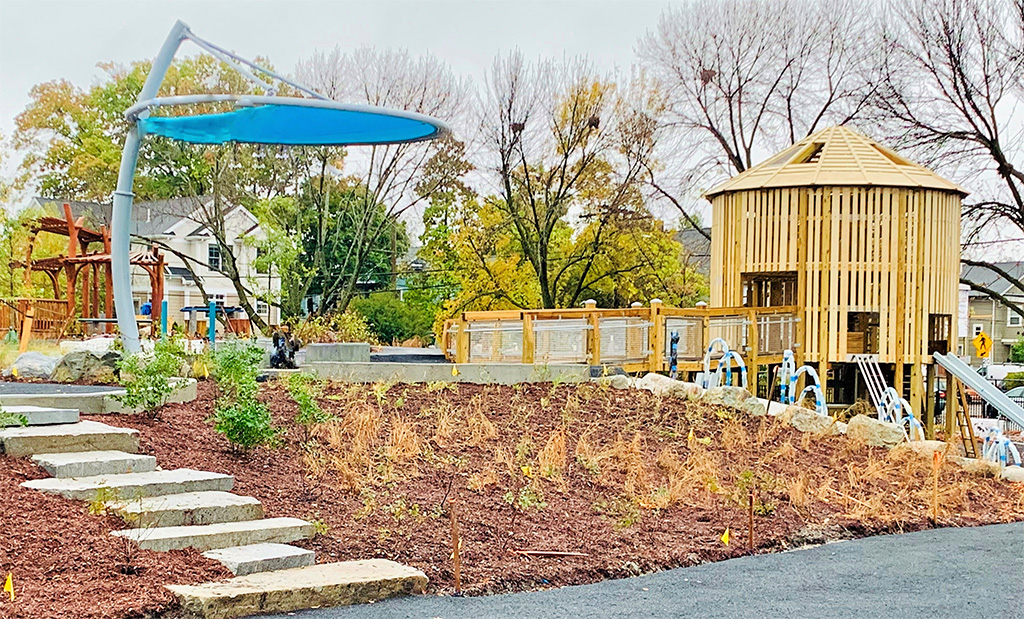 The new playground at Danehy Park. (Photo: City of Cambridge)

Simmons added that she had “concern that this last-minute proposal of using this young lady to either block or blunt the effort to name this playground for Mr. DePasquale almost sets this process up as a kind of chess game, using the prospect of naming this for a woman of color as checkmate against naming it for someone the councillor may have taken issue with. Again, I’m not saying this is the councillor’s intention. I am speaking to how this made me feel, and how it made other black women, brown women and other women of color feel.”

“I don’t want her to feel that this honor is something she may be getting partially because in effect she’s being used to block a different outcome,” Simmons said.

Other councillors saw the proposal to honor a current city official as the more inherently political act.

Though the idea was to have the playground named when presented to the public last weekend, councillor Marc McGovern acknowledged that such an honor for an active employee was “unusual”; councillor Dennis Carlone agreed “that it is odd” and said he had felt this way for some 20 years. Both, however, signed on as cosponsors of Simmons’ order.

Councillor Quinton Zondervan said that, although DePasquale was deserving of the honor, “I’m not comfortable with the implications … that creates a lot of expectations.”

The city’s charter makes the council a weak body with little political leverage to make a city manager follow its wishes. Past councillors have said they worried about offending city managers and seeing none of their policy orders acted on by city staff.

Sobrinho-Wheeler, who is not returning to the council next term, had a typically mild response to the implication of political game-playing – that his amendment was’t about DePasquale. “The point with these additions is that there are people who have not had the opportunity to be city manager,” he said. “This gives us a chance to think about folks who have not had the chance to be in those positions of power but have made significant contributions.”

The city should find another way to honor Girma, Simmons said.

Leading a Committee on City Art, Monuments and Markers helped clarify Simmons’ thinking on namings and how to achieve balance, she said. “I do not mean that we should overcorrect by saying, ’Let’s no longer recognize the accomplishments of white men from our history or those who are currently contributing so much to our city,’” she said.

At the end of the meeting, Simmons presented a late policy order proposing the creation of a working group to address how to name parks, buildings and playgrounds. It was approved unanimously with an amendment from McGovern that added street dedications to the focus.