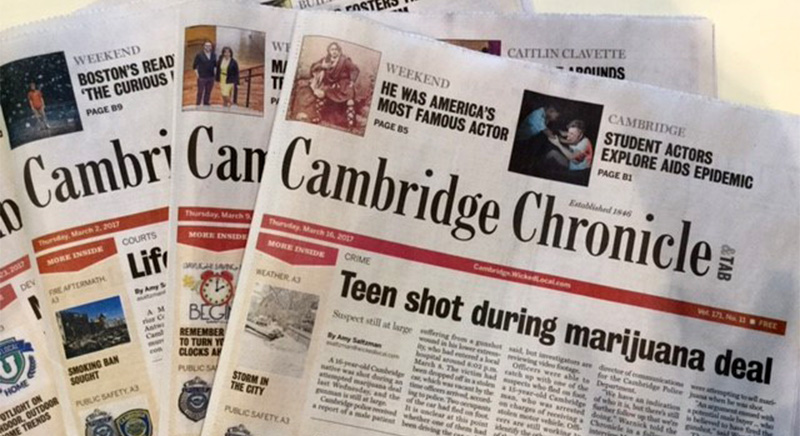 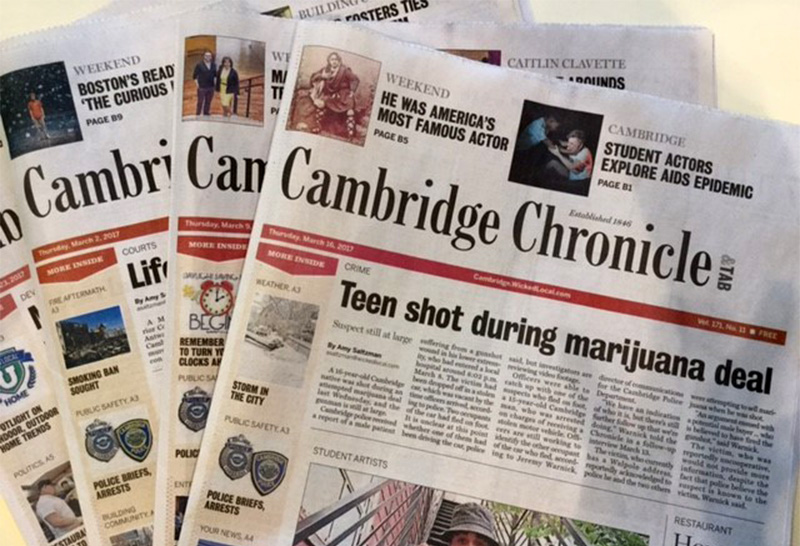 Copies of the Cambridge Chronicle from 2017. (Photo: Cambridge Main Library)

The Cambridge Chronicle has a new editor and reporter in Will Dowd, who arrived in town from a posting with Gannett in Swampscott and Salem in time for a weekend playground unveiling and published an introductory letter Wednesday. He replaces Amy Saltzman, who left Oct. 22 after more than nine years editing the weekly paper.

A gap of three weeks is better than what some communities encounter under Gannett’s corporate ownership, as “in Medford we went a year and a half without a single full-time staffer,” media critic Dan Kennedy wrote Nov. 5 on his Media Nation site. That Cambridge now has one – for the country’s oldest surviving weekly paper – was a sign for optimism, he suggested, considering that the Virginia company closed several Massachusetts papers over the summer.

As Saltzman moved on to devote more time to teaching at Boston University, Dowd said he has “strived to publish the best possible copy that reflects many points of view, context and nuance and clear thinking” as a reporter and now could apply his curiosity in Cambridge, a beat he’d looked at “with envy.”

The transition sparked a discussion online about the Chronicle’s long-term role in the community, especially after Saltzman’s belated farewell letter urged residents to support local journalism by subscribing.

Kennedy considered it. “Should Cantabrigians support the Chronicle? My answer would be yes if they’re getting value from it. But I don’t think anyone should feel obliged to support a paper that’s been hollowed out by Gannett and its predecessor company, GateHouse Media, especially when it could almost certainly be run profitably with a bigger staff and a more imaginative approach to the business of journalism,” he wrote Thursday. “Then again, news coverage in Cambridge has always been a puzzle,” particularly in the shadow of Boston, with outside outlets sometimes perceived as covering the community well enough.

Saltzman’s call was welcomed by some: Robert Winters, who appears on Cambridge Community Television and maintains a site that follows mainly local politics, tweeted that “We should all be partnering” with the Chronicle.

Saul Tannenbaum, who’s taken part over the years in CCTV’s Neighbor Media news gathering and in advocating for a municipal broadband feasibility study, had a reply to the contrary in a Twitter thread.

“Let’s unpack what ‘partnering with the Chronicle’ really means. The Chronicle is owned by publisher Gannett. Gannett is owned by the New Media Investment Group, which is in turn owned by Fortress Investment. Fortress Investment is owned by Japanese holding company SoftBank. The acquisition was funded by debt, a leveraged buyout. In these acquisitions, the profits of the acquired companies are intended to be used to repay the debt,” Tannenbaum said, in part. “The staff, such as it was, was cut and consolidated, operations squeezed for every last penny. Cambridge is not unique. These are the financial forces that gutted local news (and, hence, democracy) around the nation.”

“So ‘partner’ with them? Provide your own labor to prop up the worst of late capitalism? Why? Better to invest in local news built from the community up, rather than hedge fund down,” Tannenbaum said.

This post was updated Nov. 18, 2021, to correct Will Dowd’s previous office with Gannett.