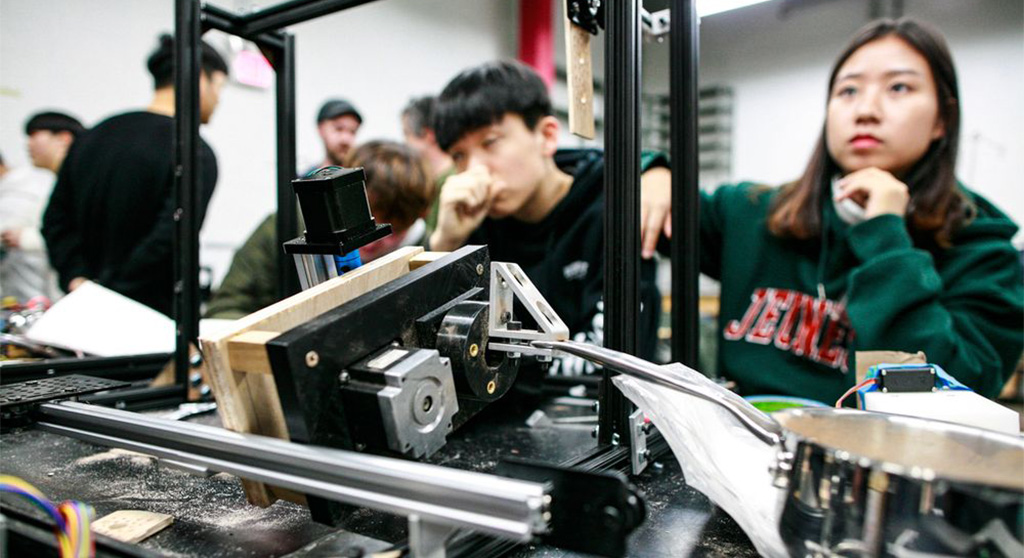 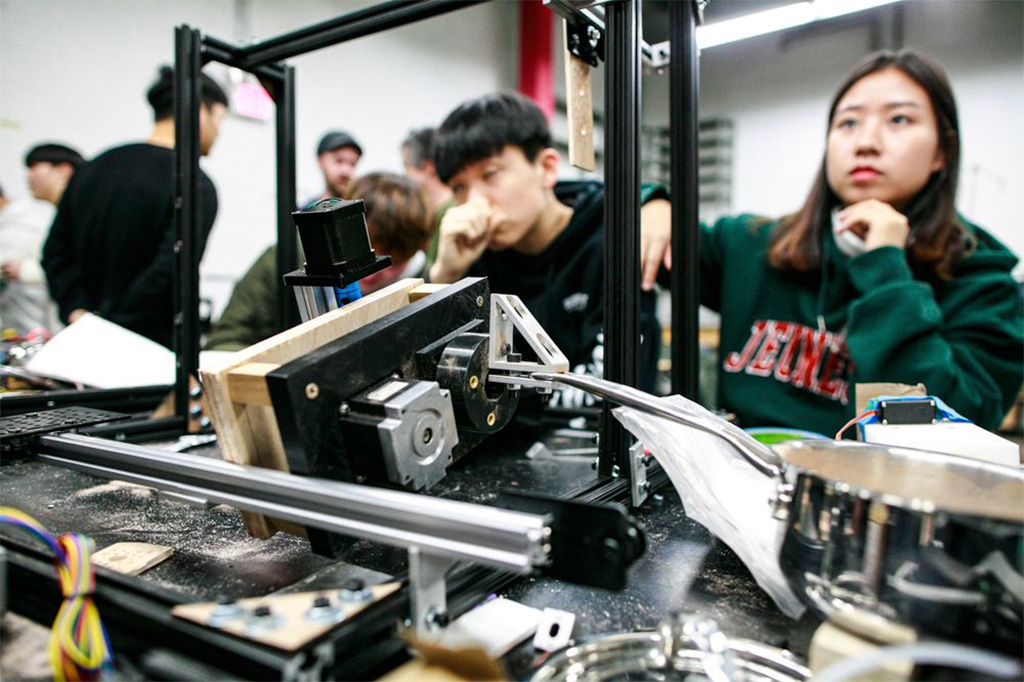 Alumni of the Artisan’s Asylum makerspace hoped to rebuild in Somerville after their organization moved to Allston. With an announcement Thursday that the space has been leased, that dream got more complicated.

The old Asylum space will become room for The Engine, an MIT spinoff fund for “tough tech” startups solving problems with a mix of science and engineering. Somernova announced the news at its Holiday Nova party, held on the campus housing creative companies near Somerville’s Union Square with colorful light projections displayed on the outer walls, a towering, inflatable Santa, a band and appetizers.

The Engine was launched in 2016 and now includes some funding from Harvard and a program with the City of Cambridge called “Pathways to Invention” giving kids hands-on experiences with invention. It works mainly to support companies – around 35 so far – such as Biobot Analytics, which began as an examiner of wastewater to assess the opioid epidemic and is now known for its work looking for coronavirus.

As the old space Asylum space was leased to The Engine, jeweler Ilana Krepchin said the makerspace’s move was “a loss for Somerville” and she felt lucky to still have a studio at Somernova for herself. “It’s been a lifesaver,” she said. 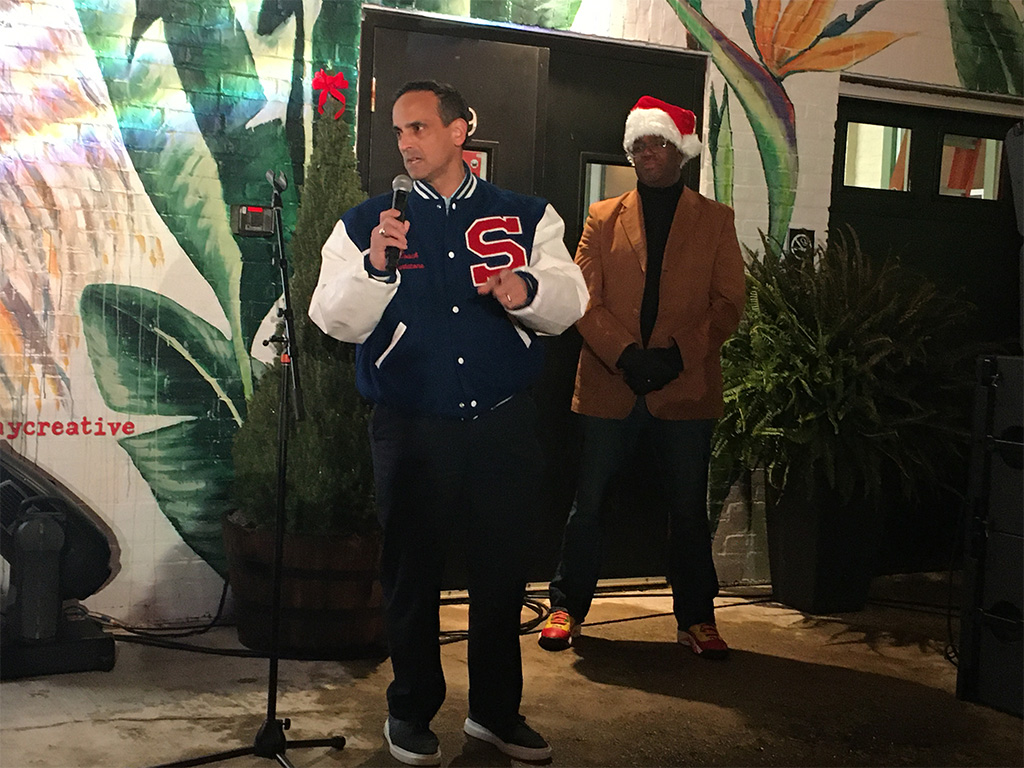 Artisan’s Asylum, on Tyler Street for more than 10 years, closed to the public Aug. 31 to move operations after Harvard offered a 12-year lease with two five-year renewal options. The shutdown came the same day as  the artists of Somerville’s Central Street Studios were displaced – underlining worries that traditional art spaces are at risk of being left behind as tech companies, labs, breweries and rock-climbing gyms take their place.

The new Asylum plans to be open to the public in February. A group of alums who chose not to go has tried to pick up the pieces with Somernova, despite a history of difficult lease negotiations and a space in need of repairs.

Somernova said it conducted a several-month private review to see if it made sense to try again. “I’m definitely not saying [a makerspace will be back]. I’m saying we are working to figure out what everyone in the community wants,” spokesperson Kristin Phelan said in early November. “What we have learned by talking to over 142 different artists and makers locally and nationally is that the future is not about silos … we believe that if we could actually start those conversations in which everyone is at the table, then we could actually get to a reality that now actually works better for everyone.”

During the review, Somernova made a temporary room available filled with a few machines – what remained of the older makerspace community.

Phelan offered assurances that plans would include people with low incomes. But any plan would have to correct for what went wrong at the Asylum before its move, and for the difficult finances of art spaces in general – and ultimately Somernova went for The Engine lease instead.

“We are in this evolving process right now at Somernova in that we’re full as a campus, and we’re trying to figure out how do we continue to grow in scale and do so at our current occupancy and density of what we have here on campus. We are looking for a lot of flexible terms and agreements. We’re looking for the right tenants; we’re not just looking to put people in spaces, and we’re looking for partners that want to be here for the long term,” Phelan said. 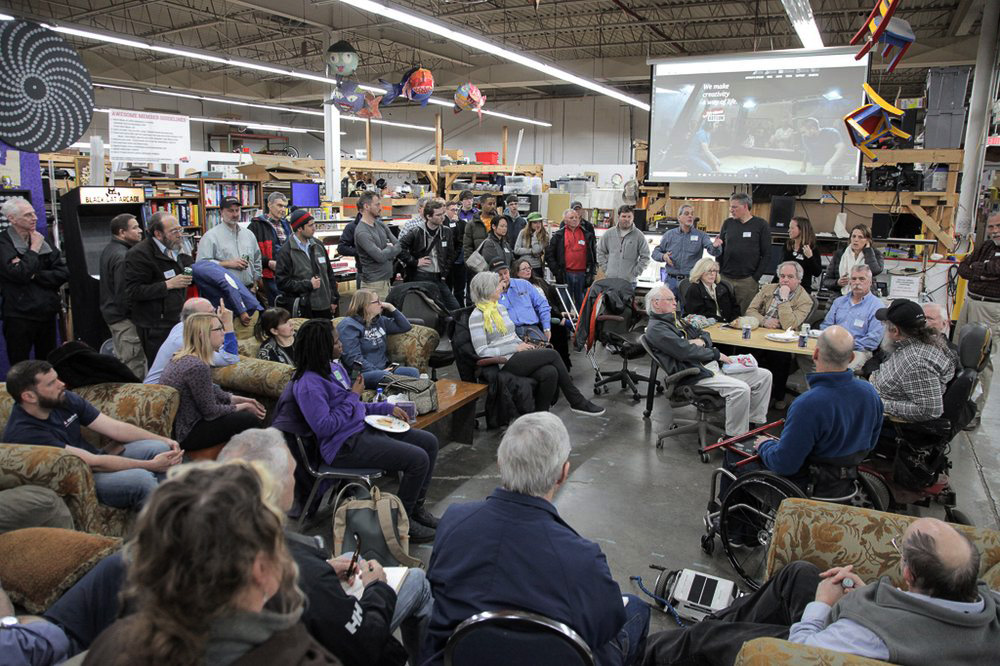 Artisan’s Asylum started in 2010 among a small group of friends and grew to about 1,000 members and 40,000 square feet. (The size will expand again with its move to Allston, but member Adam Brown, who sat on a strategic planning committee for the Asylum move, said it was expected that the organization could lose half of its members.)

“Artisan’s Asylum is the reason that that entire area is as vibrant as it is right now. When I first showed up there, there was nothing in that whole complex except for the Asylum. The Artisan’s Asylum came in, brought a bunch of really creative minds – and really kind of insane people, to be honest – and that attracted like-minded, creative, and entrepreneurial people,” said prop maker Jacob LaRocca, who has been working with a handful of other alums and Somernova on another makerspace.

Alums such as LaRocca say that as the nonprofit Asylum grew over the years, it suffered from internal governance problems, writing and rewriting its bylaws and eventually, in 2018, hiring an executive director from outside the organization and appointing an outside board.

That was the same year that the family-owned Ames Business Park was bought by Boston- and Hong Kong-based Rafi Investments. The $88 million deal closed in April and by December the Somernova name was being touted as the 300,000-square-foot home of Greentown Labs, Brooklyn Boulders, Aeronaut Brewing and Artisan ’s Asylum. 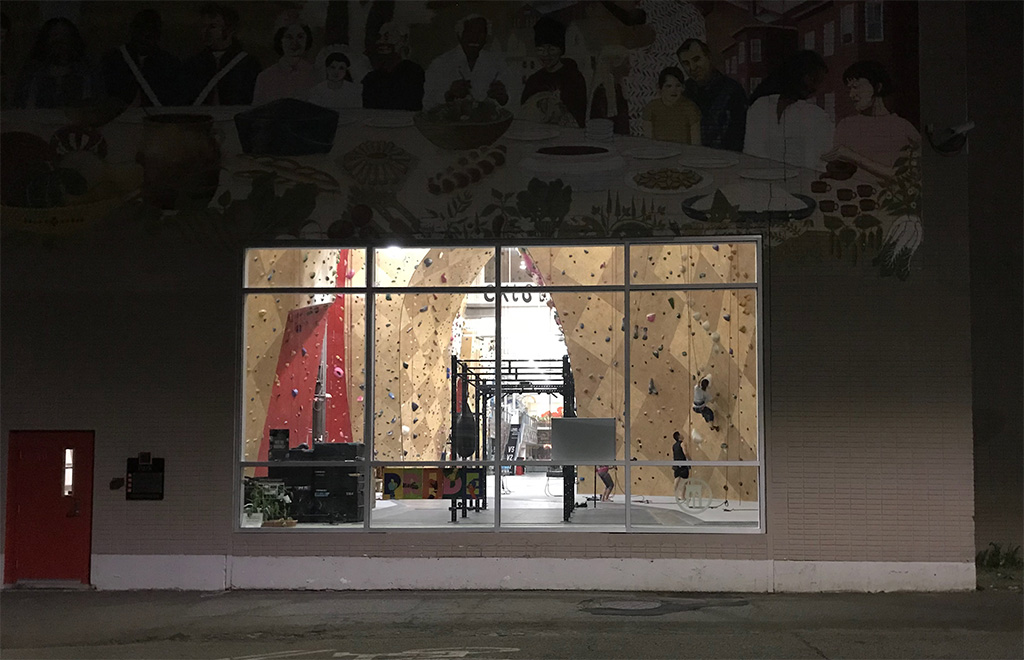 Brooklyn Boulders, seen in a 2018 photo, remains at Somernova with Aeronaut Brewing and other companies. (Photo: Marc Levy)

Behind the move to Allston

Though Asylum leadership expressed excitement at the change, lease negotiations with Somernova soon proved rocky, former members said. “There were opportunities [to stay], but due to staffing issues and board members that were inexperienced in that type of thing, we weren’t able to put forward a valuable enough offer,” said LaRocca, at one time a nonvoting member liaison on the Asylum board.

One of the biggest factors behind the Asylum move, agreed on by all interviewed for this article, was that its Somerville space was in need of serious repairs that will bring it up to current code.

Lars Hasselblad Torres, the director hired in 2018, said of the lease negotiations and the ensuing search for a new space, “We sat down with Somerville Economic Development. We toured buildings and sat down with investors. On one property we were outbid by $6 million. We were actively looking for a space for two years. We ended up moving, but not for a lack of trying”

“The Asylum needed space to grow, needed a better space with better infrastructure,” Hasselblad Torres said. “We made efforts to negotiate the lease, but the best offer we got was a two-year extension from Rafi.”

Somernova’s Phelan, commenting during Thursday’s Holiday Nova party, had a different perspective on the negotiations. “f you’re going to get an opportunity to work with Harvard, we’re like, congratulations. We just couldn’t compete with that,” she said. “They got an incredible opportunity … and anyone who has that presented to them would be silly not to take it.” 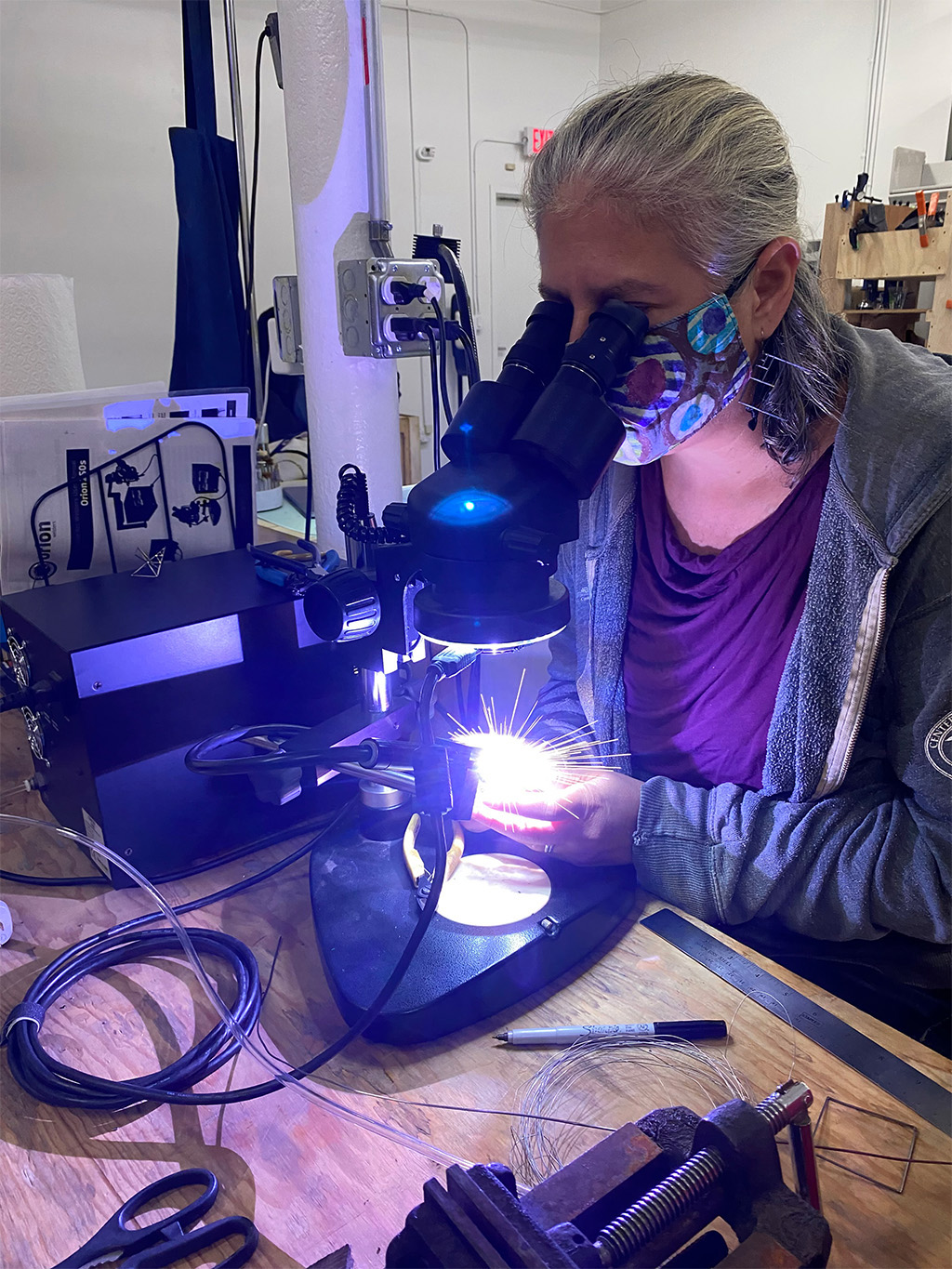 When leaders’ intention to move became more apparent to members, they started to splinter off – some due to internal grievances with the board and directors, some because of what the departure meant for Somerville and some because of the cold logistics of schlepping to Allston from Somerville and back every day, though green line extension trains due in the spring could make the journey easier.

“I think that Somerville as a city could have done more to help us stay and they could have even expressed even a marginal amount of desire for us to stay,” LaRocca said. “That was one of the reasons why we sort of stopped looking in Somerville – because it became clear to the board at the time that they weren’t really going to be doing anything out of their way to help us stay in the city.”

Hasselblad Torres, in a mid-September interview, said that “the biggest challenge for art spaces is that they are easily kicked around by property owners and developers, pigeon-holed into short leases with no long-term security..“

But he does not think there is an art space crisis in Somerville. “The situation is predictable, it’s preventable,” he said. “We have a crisis of leadership on this issue.”

Before Somernova’s Thursday lease announcement, makers had some optimism around rebuilding. “With Artisan’s now going off to Allston, there’s a vacuum of a place that needs to be there for people to make art, to make things,” said Jason Kuehl, who is working with LaRocca. Krepchin, who owns of Sculpture To Wear, said she was disappointed when the Asylum announced its move to Allston and, until Thursday’s announcement, had looked forward to working with Somernova to open a new, large-scale makerspace.

If it’s not at Somernova, it’s not clear where else it might go.

The Somerville Armory on Highland Avenue was claimed by the city in May through an eminent domain land seizure to be set aside as permanent arts space, but the building’s 33,422 square feet – much of it already occupied – suffers in comparison with the Asylum, what Kuehl called “40,000 square feet of magnificence.”

Somerville’s 2019 zoning says all new lab space and development near transit must set aside at least 5 percent of its square footage for the arts. In addition, “we have what’s called a fabrication zone written into our zoning code that preserves existing art spaces – buildings that are used for arts and other industrial uses,” said Gregory Jenkins, of the Somerville Arts Council.

Those slices of development might not be able to make up for what’s being lost elsewhere in the city. Somerville’s ongoing real estate success story, aided by jumps in property value that accompany the construction of five train stops on the MBTA green line extension, takes away more than it gives to the sector.

“Arts uses, since they’re typically not profit-driven, there’s a limit to how much they can rent space for, whether that’s in somebody’s house, in an artist live-work space or … just a workspace like at the Asylum. So when land values go up, rents go up, and so it makes it more difficult for artisans,” said Tom Galligani, Somerville’s director of economic development.

On a municipal level, said Denise Taylor, director of communications and community engagement for Somerville, “It’s unfortunately been easy over time when hard decisions are made in budgets at every level to push [the arts] aside, thinking [they are] a luxury as opposed to a necessity.

Shira Laucharoen contributed to this report.

This post was updated Dec. 10, 2021, to attribute estimates of Artisan’s Asylum member loss to a member of a strategic planning committee instead of to an organization report.