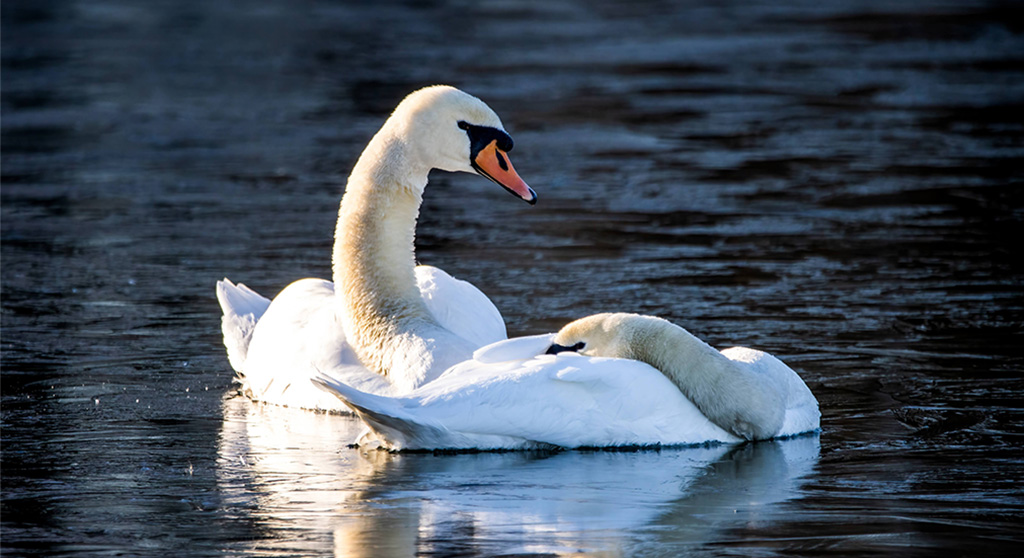 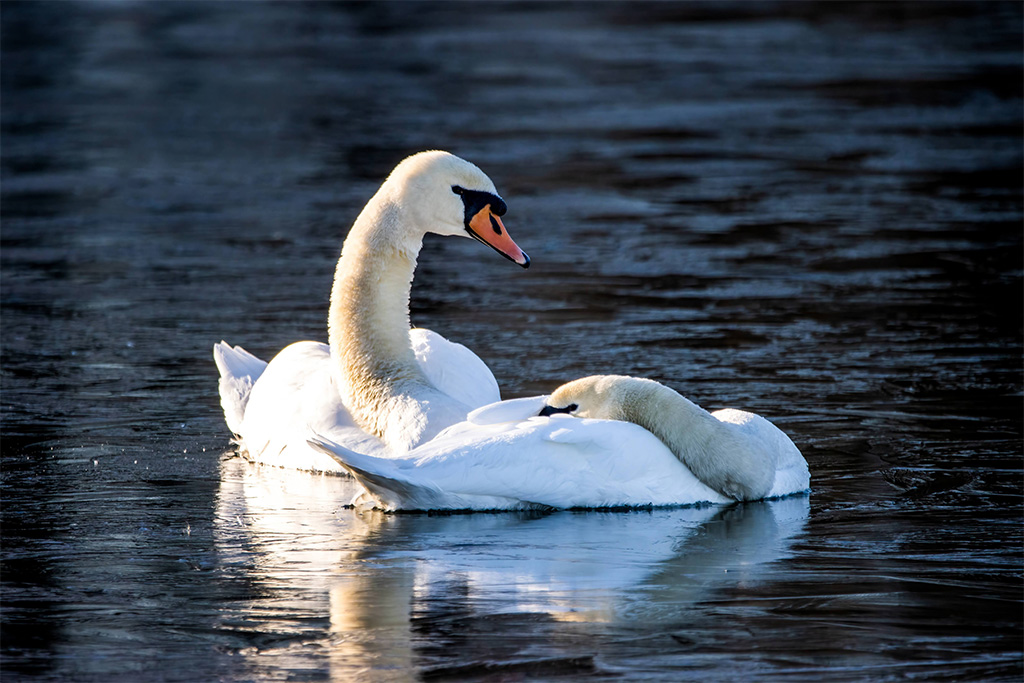 A pair of mute swans in Strawberry Hill this month. (Photo: Richard George)

Mute swans (Cygnus olor) are native to Eurasia, and in Great Britain beginning before the 1100s, king and nobles harvested swans for food and even gave them royal status. Members of the nobility marked their swans with a unique pattern of nicks on their webbed feet or bills; every year gamekeepers would drive swans to the banks of the Thames River, examine the marks of the parents and cut nicks in the young cygnets to match the parents’ marks. The gamekeepers then released some of the youngsters back into the river to maintain a breeding stock, capturing the rest to be fattened on barley for eating at royal banquets and celebrations. (Four hundred young swans were eaten at a three-day feast in 1466 when the Archbishop of York was installed.)

The process of marking swans was called swan upping, with any swan in the river that did not have a mark belonging to the crown. Swan upping still occurs every year on the Thames in July (when the adults are molting and the young cannot yet fly), but today the swans are banded rather than nicked. They are also weighed, measured and their health monitored. Some scientists think that swan upping saved mute swans from extinction – these swans were extirpated in other parts of western Europe in the 1200s through the 1800s. 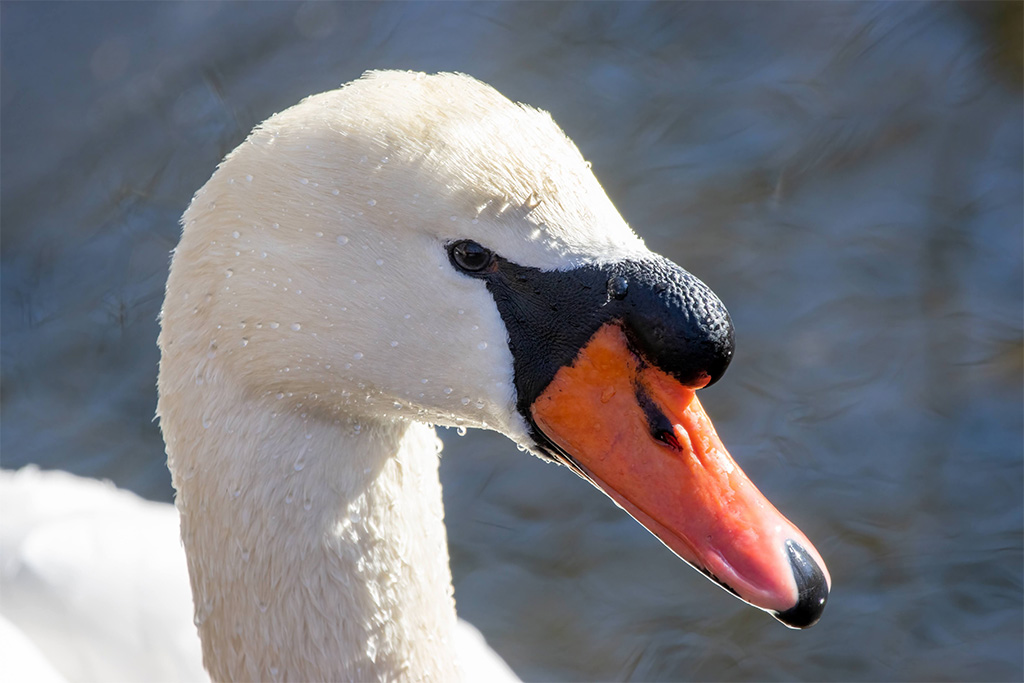 The black knob on the male swan’s bill swells during the breeding season and becomes larger than the female’s. (Photo: Richard George)

People first brought exotic mute swans to North America in the 1870s to decorate country estates, city parks and zoos. More than 500 mute swans were imported between 1910 and 1912 alone. Soon some birds escaped, establishing breeding populations in the wild. Since then, the birds have spread across much of North America. The swans we see in Massachusetts today are probably descended from birds that escaped from Long Island and lower Hudson River estates in the early 1900s. These swans were first recorded breeding in the wild along the Hudson River in 1910, and first recorded in Massachusetts – on Martha’s Vineyard – in 1922. 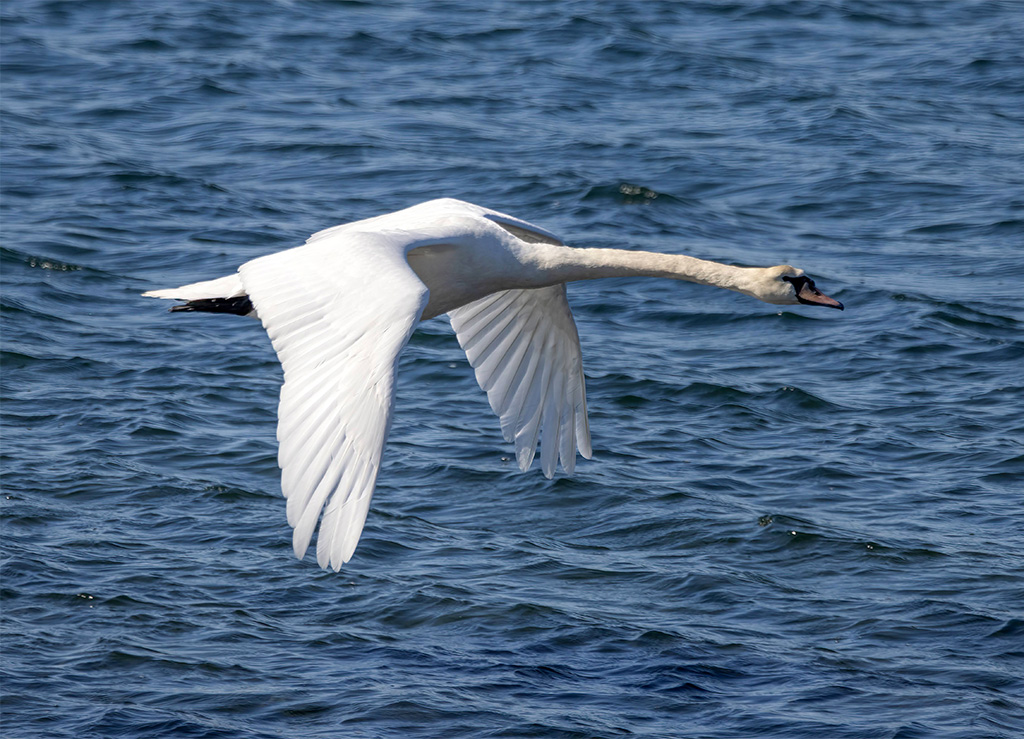 Mute swans are one of the heaviest flying birds, typically weighing from 20 to 25 pounds. They are about 5 feet or more in length, with a wingspan of 7 feet. (Photo: Richard George)

Since these swans are so large, they have few predators to slow their population growth, and because they have voracious appetites (eating 8 pounds each day, or up to 43 percent of their weight), they eat vegetation faster than it can recover, which reduces food for native ducks and geese. Their droppings can degrade water quality. And they devour shallow grasses that shelter many other organisms. No wonder many wildlife biologists consider mute swans to be an invasive species and they are no longer protected under the Migratory Bird Act. They are protected by the Commonwealth of Massachusetts, though, and unlike many other species of waterfowl, hunting mute swans is illegal. Mute swans will probably continue to increase in numbers and expand their range in Massachusetts unless checked. 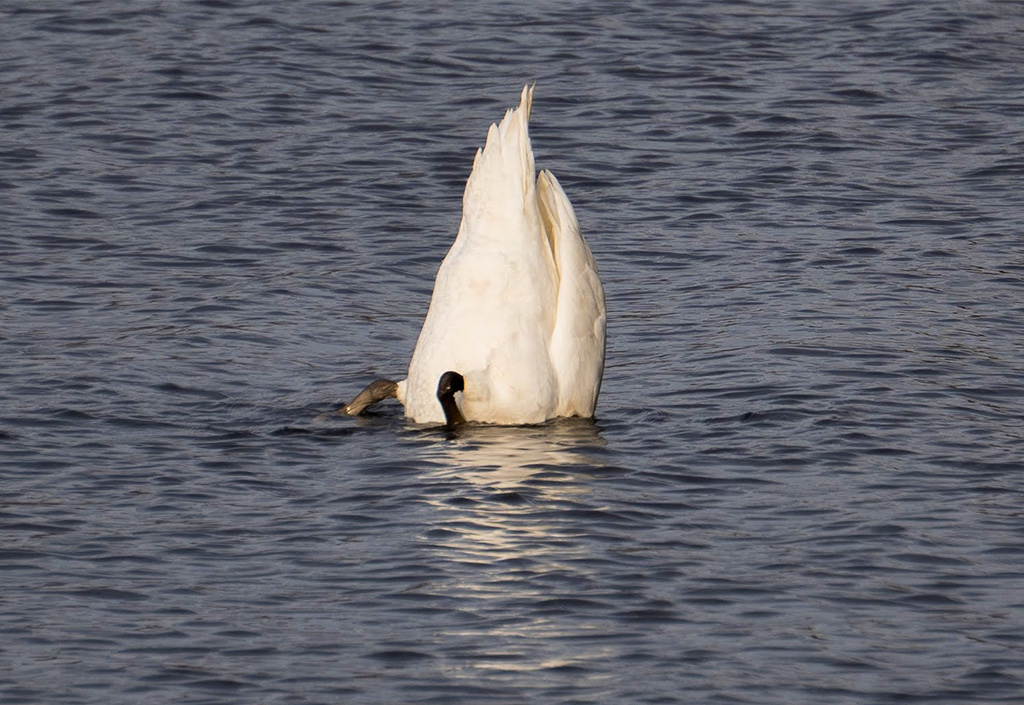 The word swan is from the German word Schwan, meaning “the singing bird,” so mute swan might be an oxymoron. Although these birds are not as vocal as other swans, they do make eight to 10 calls during courtship and greeting. They also hiss, snort and make a hoarse trumpeting sound when defending their territory. As these birds fly, you can hear their rhythmic wing beats from great distances. The sound of mute swan wings is said to have inspired Richard Wagner when he composed “Die Walküre” (“Ride of the Valkyries”).

Mute swans, like mallards, feed by upending themselves in the water (or dabbling) to eat vegetation growing below. They also skim the surface of the water for plants. The long neck of a mute swan has more vertebrae, 23, than any other warm-blooded animal. 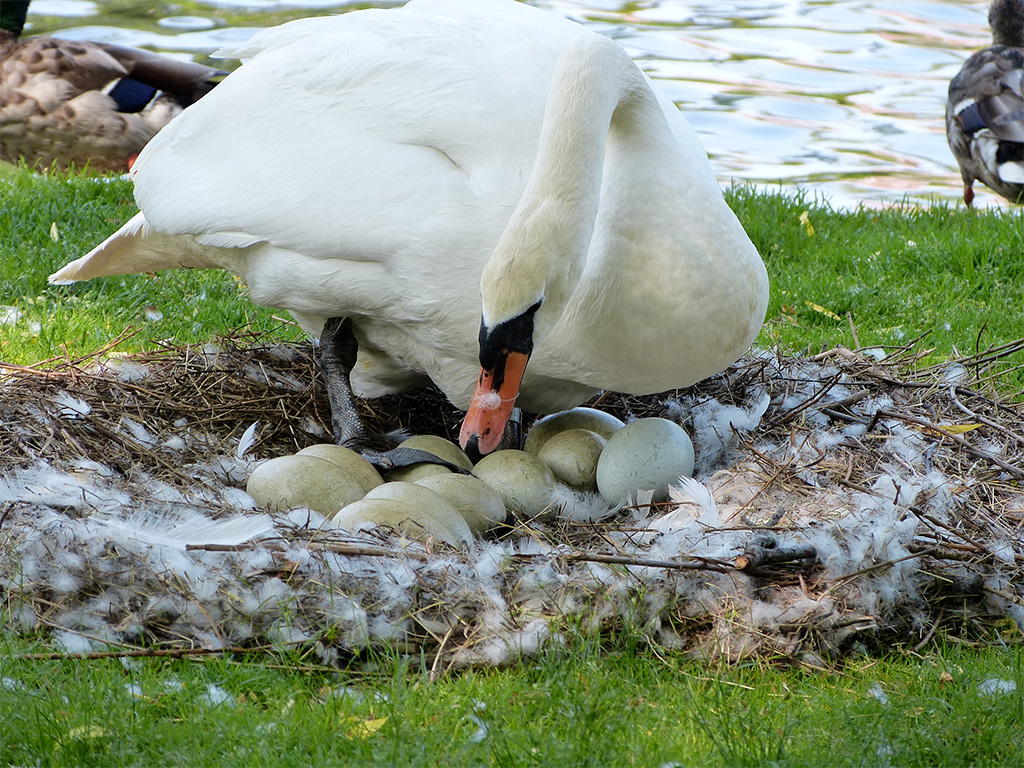 Mute swans typically lay one egg every other day for a total of about six eggs, but they can lay as many as 12, as seen in this nest in Boston’s Public Garden. (Photo: Brian Rusnica) 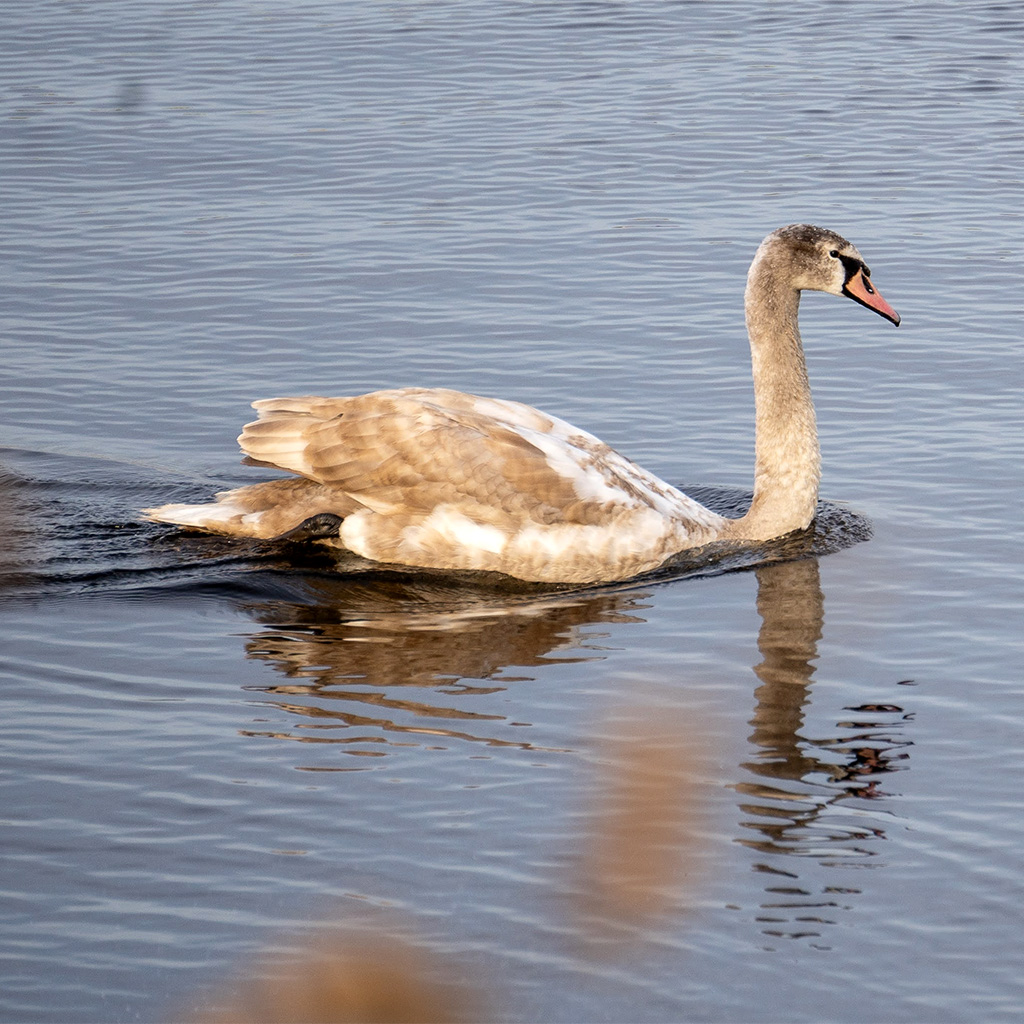 Cygnets from the earliest broods may start to fly in September. (Photo: Jeanine Farley)

Female mute swans typically lay about six pale green eggs in a nest at water’s edge in April or May. The eggs hatch after about 36 days, and small cygnets are often carried on the back of a parent for warmth and protection. They learn to fly at about 4 to 5 months of age. The young stay with their parents through the first winter, and do not turn entirely white until they are a year old. Adolescent swans stay together in flocks, and form mating pairs at about 2 years old, though they do not nest until they are 3 or more years old. Mute swans typically live in the wild about six to 10 years, but on rare occasions have lived 20 or more years. Mute swans do not migrate, but in the fall, they fly to areas that contain water that does not freeze over, where they congregate in flocks. In the spring, these swans return to their breeding sites, where they remain until their cygnets are old enough to fly.

Mute swans form long-lasting pair bonds and raise their young together. If one parent dies, the other takes over the parenting duties, as happened on the Charles River Esplanade in the summer of 2021 and Spy Pond in Arlington this fall. 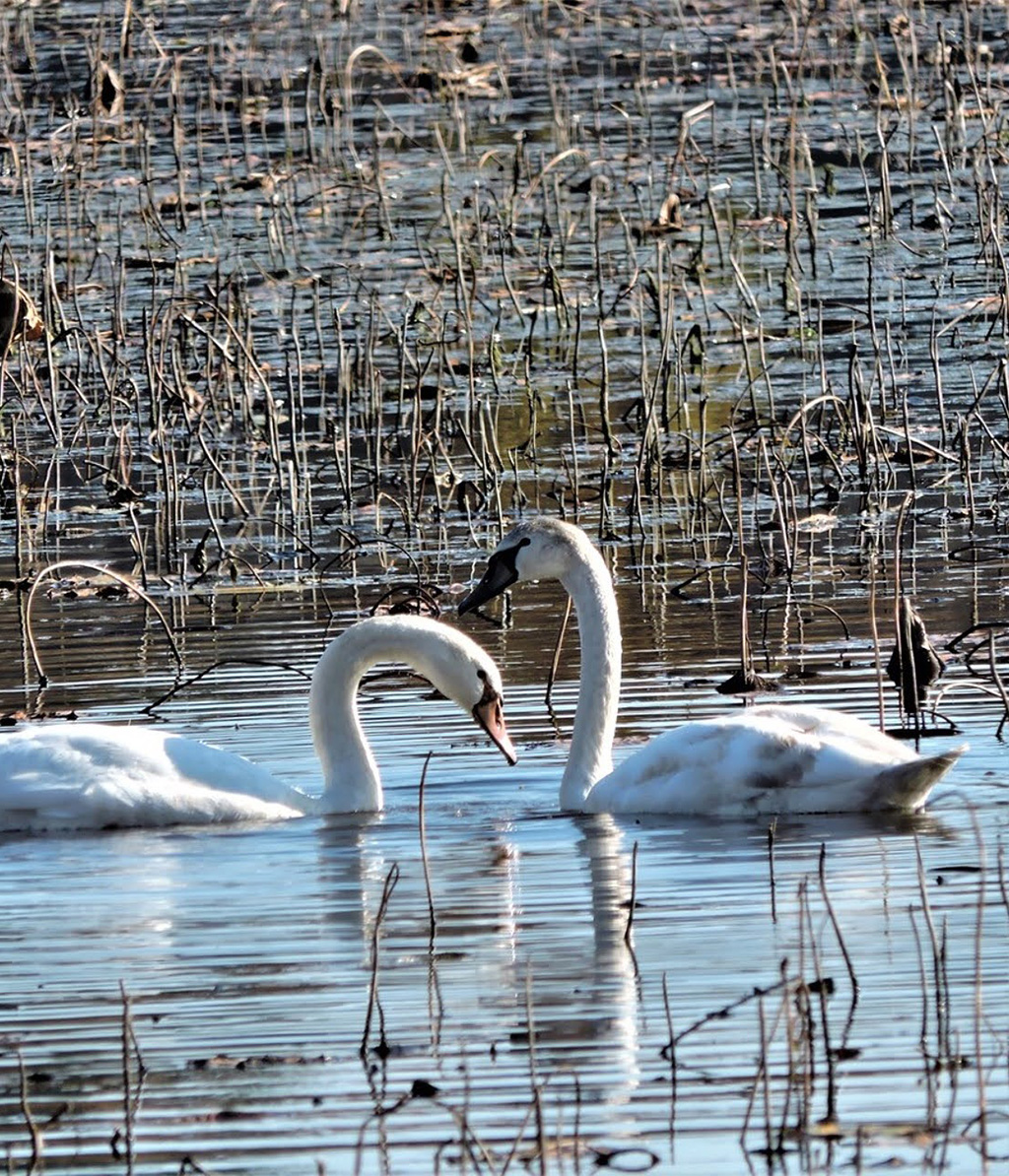 The bills of mute swans turn from black to orange after about a year. Its orange bill distinguishes the mute swan from other swans in North America. This photo was taken in November. (Photo: Ann Schlesinger)

Unlike other swans, mute swans are easily tamed. Mute swans in a moat around Bishop’s palace in Wells, England, have been ringing a bell when they want to be fed since 1850.

Humans and mute swans have a long history together. No matter how you feel about them, you cannot deny their magnificence, as Hans Christian Anderson wrote so many years ago:

[A] flock of large beautiful birds rose from out of the brushwood; … their plumage was of a dazzling white, and they had long, slender necks. They were swans; they uttered a singular cry, spread out their long, splendid wings, and flew away from these cold regions to warmer countries, across the open sea. They flew so high, so very high! … Ah! he could not forget them, those noble birds! those happy birds! 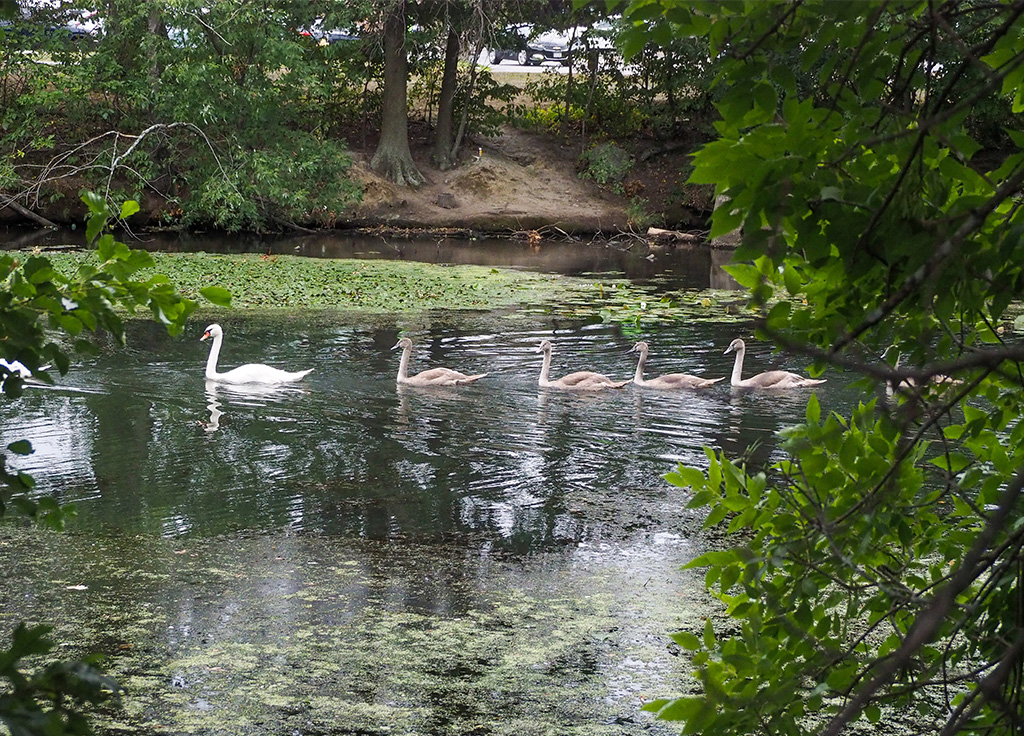 Male swans are called “cobs,” the females “pens” and the young “cygnets.” These cygnets in August 2020 are still too young to fly. (Photo: Jeanine Farley)