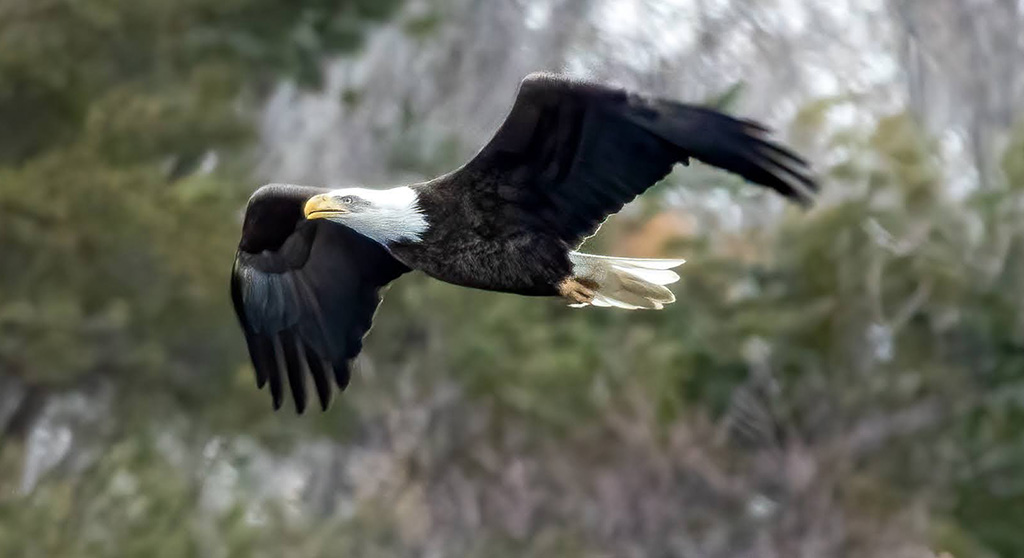 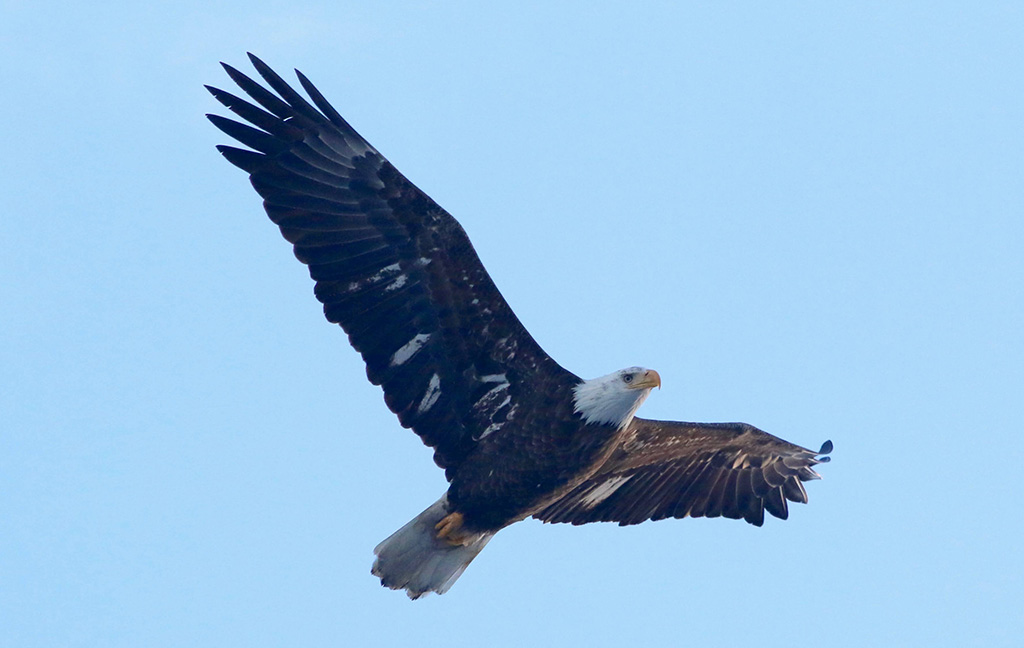 Bald eagles remain in one location year round if they have access to open (unfrozen) water. Otherwise they migrate in winter to warmer locations where they can hunt fish. (Photo: Brian Rusnica)

In Roman mythology, an eagle was the symbol of Jupiter (Jove), king of the gods, and the first representatives of the young United States modeled many institutions after the Roman Republic. In 1782, the Continental Congress adopted our official seal, which featured an American bald eagle. At that time, there were an estimated 50,000 nesting pairs of bald eagles in the United States.

Eagles had such symbolic significance that in 1798, after yellow fever epidemics in Philadelphia killed thousands of people, a doctor who treated many of the sick (and who contracted yellow fever himself) was presented a silver urn with an eagle at the apex of the lid in gratitude for his life-saving work.

Not everyone adored eagles, though. Neither Benjamin Franklin in the 1700s nor John James Audubon in the 1800s thought highly. They both felt the eagle to be a bird of “bad moral character,” as it has a habit of stealing fish from other birds, especially in winter. This survival strategy is known as kleptoparasitism. In 1832, Thomas Nuttall made this observation about bald eagles: “The eagle chased the osprey and robbed her of her finny prey, diving out of the sky like a thunder-bolt and snatching the fish ere it struck the water.” 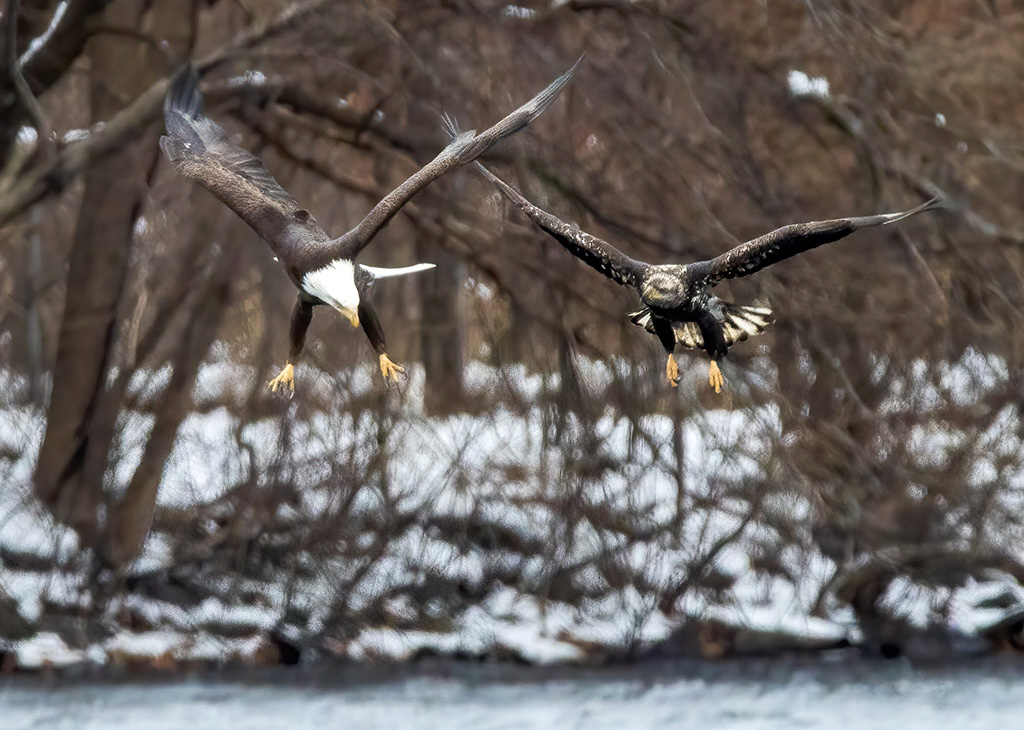 Farmers, fishers and hunters in the 1800s thought of bald eagles as marauders of fish, game and livestock. Bald eagles eat mostly fish, but they also eat carrion and small 2- to 6-pound critters – yet developed a reputation as killers of lambs, livestock and even babies.

Nuttall noted that the bald eagle preys upon “Ducks, Geese, Gulls, and other sea-fowl, and when the resources of the ocean diminish … young lambs, pigs, fawns, and even deer often become his prey. So indiscriminate indeed is the fierce appetite of this bold bird, that instances are credibly related of their carrying away infants.” 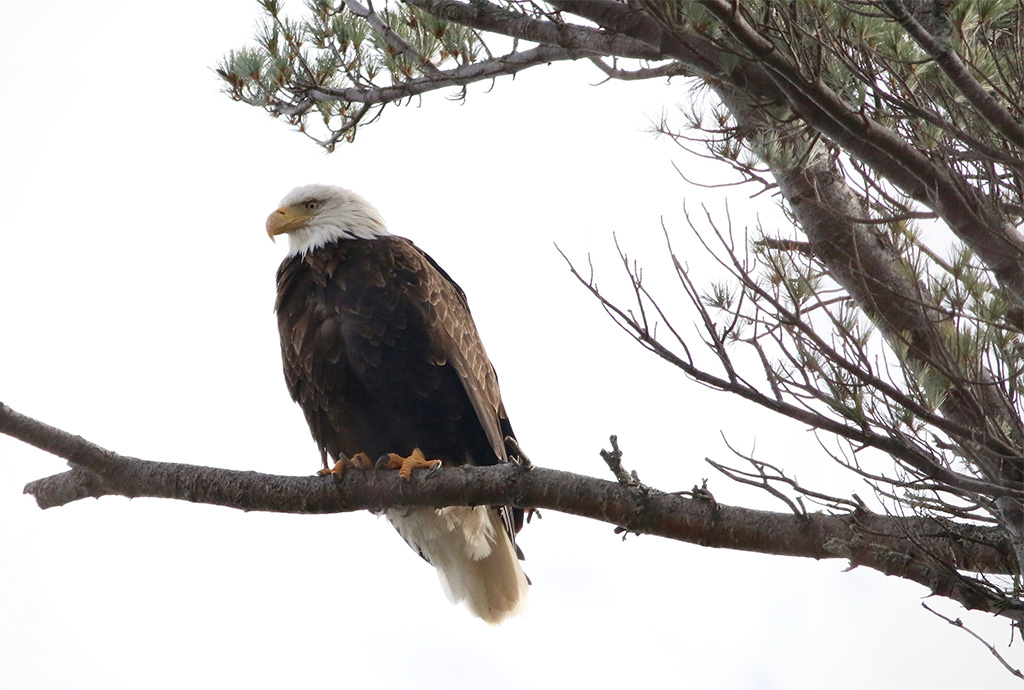 Why are bald eagles called bald eagles? The word bald comes from the old English balde, which means “white,” and indeed this bird was often called the white-headed eagle in earlier times. (Photo: Brian Rusnica) 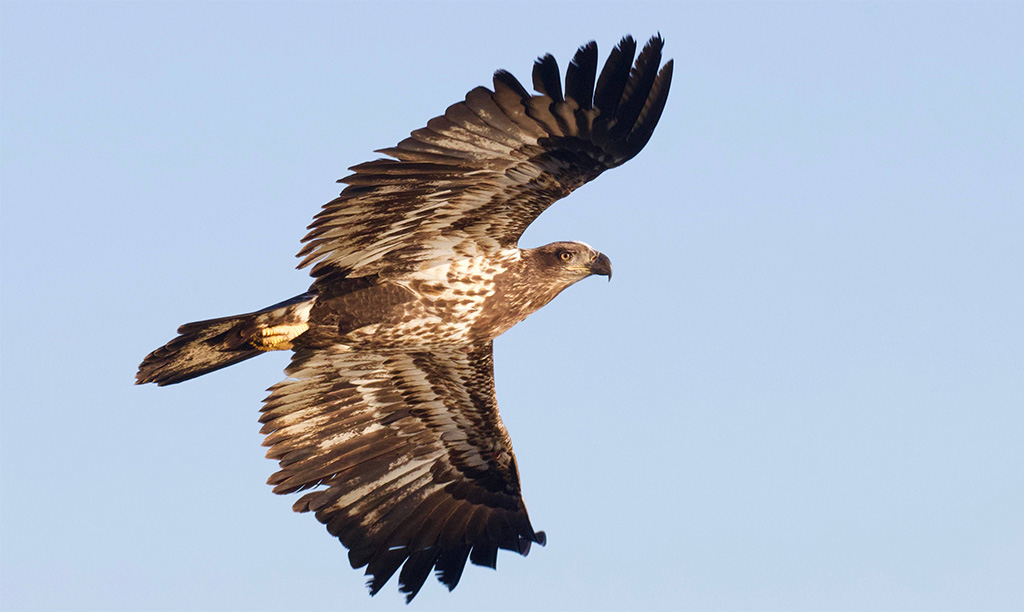 Juvenile bald eagles are more likely to eat carrion because their hunting skills as not as advanced as older birds. (Photo: Brian Rusnica)

An attempt of this kind, . . . was made upon a child lying by its mother as she was weeding a garden at Great Egg-Harbour in New Jersey; but the garment seized up by the Eagle giving way at the instant of the attempt, the life of the child was spared. I have heard of another instance said to have happened in Petersburgh in Georgia, near the Savannah river, where an infant sleeping in the shade near the house, was seized and carried to the eyry [nest] near the edge of a swamp 5 miles distant, and when found, almost immediately, the child was dead.

The 1908 Edison film “Rescued from the Eagle’s Nest” perpetuated the belief that eagles will carry away infants. (Although parts of this silent drama look as if they could have been filmed in the Middlesex Fells, the movie was actually filmed near the Bronx.) 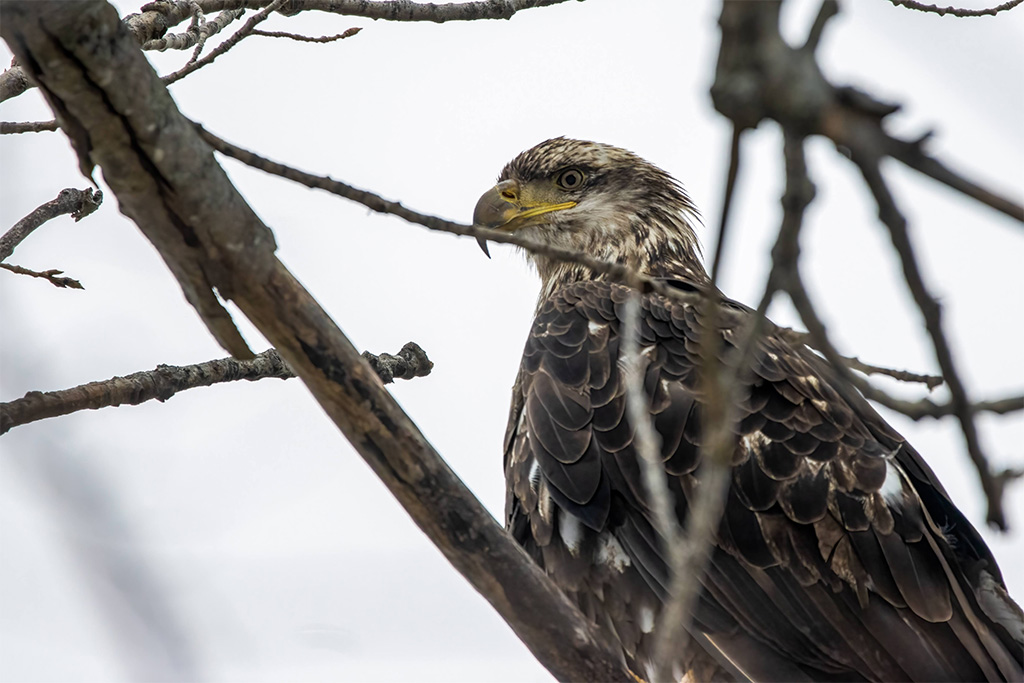 The birds were doggedly hunted and trapped. John James Audubon became aware of the decreasing numbers of bald eagles when he wrote in 1831: “I have seen hundreds [of bald eagles] going down from the mouth of the Ohio to New Orleans, when it was not at all difficult to shoot them. Now, however, their number is considerably diminished.”

Because the number of bald eagles had declined so precipitously, in 1940, Congress passed the Bald Eagle Protection Act, which made it illegal to kill or disturb bald eagles or possess eagle feathers, eggs or nests. This might have helped if not for the introduction shortly after World War II of the miracle pesticide DDT. Residues of the chemical meant to control mosquitoes and other insects washed into waterways, where fish absorbed it. Bald eagles, in turn, ingested it from the fish they ate. The chemical interferes with a bird’s ability to absorb calcium, so eagles’ eggshells were so thin that they broke while being incubated. 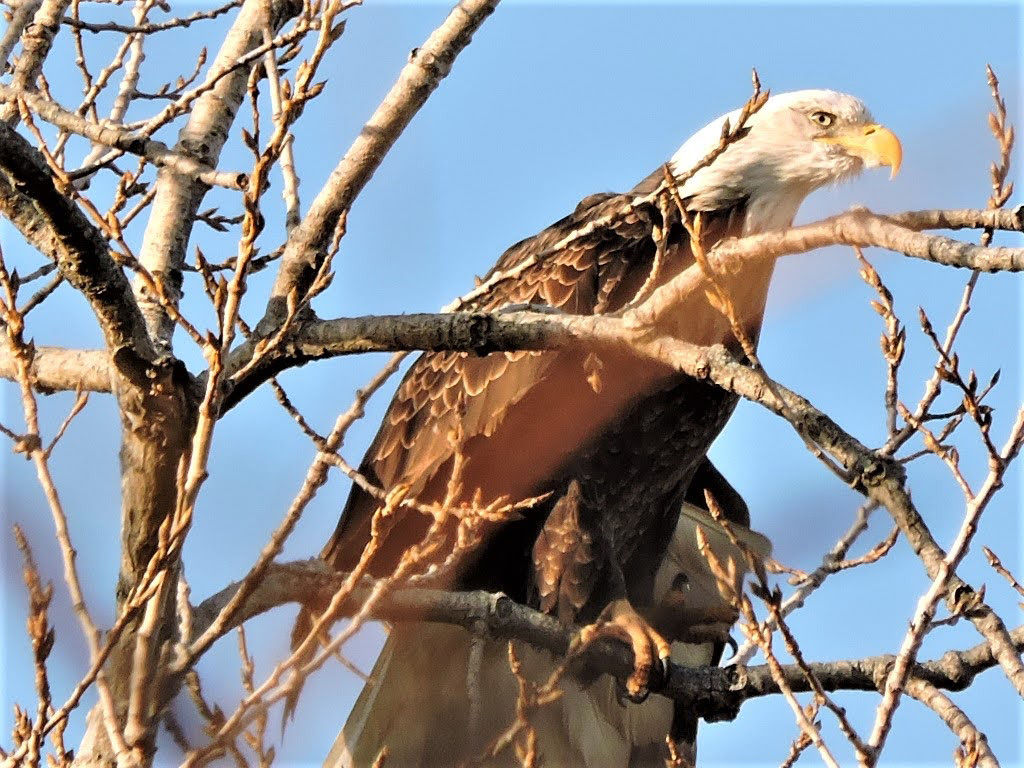 A bald eagle in the Alewife Reservation in Cambridge on Jan. 16. (Photo: Ann Schlesinger)

By 1963, only about 417 nesting pairs of bald eagles remained in the lower 48 states, and the birds were threatened with extinction. In 1962, Rachel Carson published the book “Silent Spring,” which described the dangers of DDT and other pesticides in the environment. In 1972, the Environmental Protection Agency banned the use of the chemical in the United States – a year ahead of the Endangered Species Act’s listing of bald eagles as endangered. 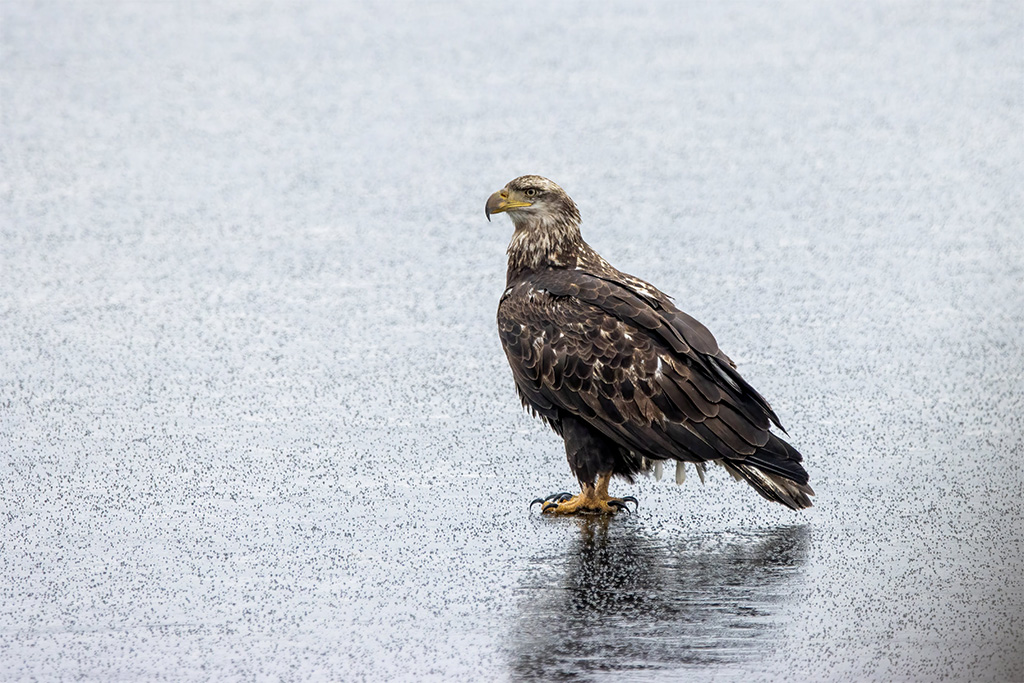 From 1982 to 1988, the Massachusetts Division of Fisheries & Wildlife and Mass Audubon raised 41 bald eagle nestlings from Canada and Michigan on platforms at the Quabbin reservoir. Caretakers used puppets to feed the chicks so they would not imprint on their human handlers. Bald eagles reach maturity in four to five years, and in 1989, the first nesting eagle pair raised a brood at the Quabbin. In the following years, more eagles nested, and some spread out across the state and into Connecticut and New York. Today bald eagles nest at the Mystic Lakes, and others visit Fresh Pond and Alewife Reservation regularly during the winter. Perhaps a new generation of eagles will make Fresh Pond a permanent home, as juvenile bald eagles spend their first four years exploring (they can fly hundreds of miles each day) until they settle on a nesting site. 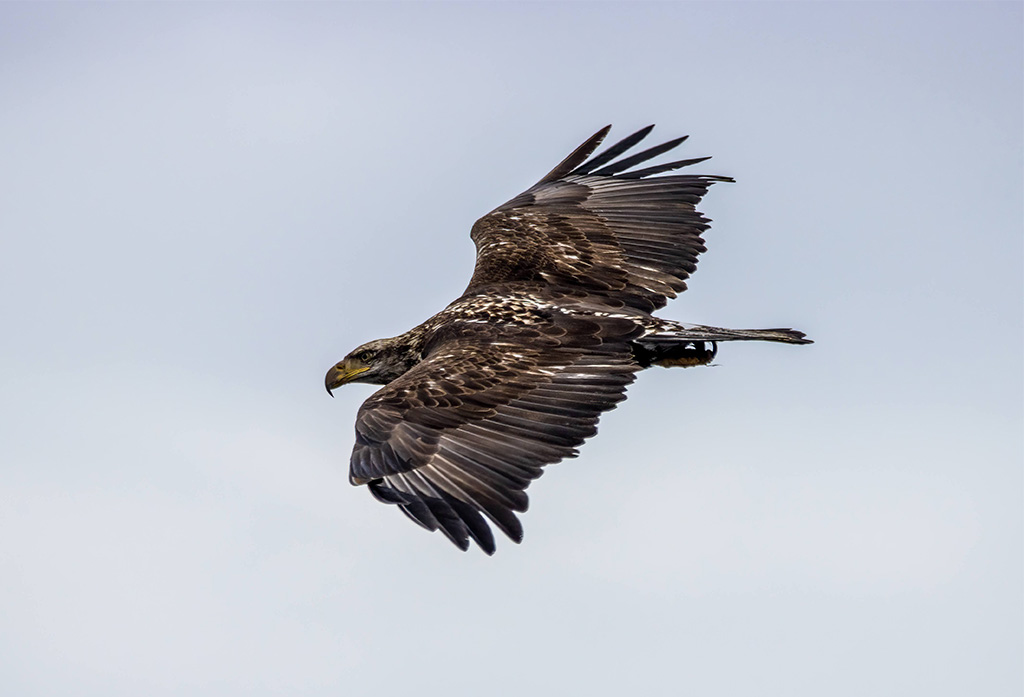 Eagles, like all raptors, have three eyelids: a top eyelid, a bottom eyelid, and a third transparent eyelid that moves from side to side to keep the eye moist and protect it during flight and feeding. (Photo: Richard George)

By 2006, there were an estimated 9,789 nesting pairs of bald eagles in the lower 48 (and 25 or more were in Massachusetts). Bald eagles are large birds, so they build large nests 5 to 6 feet in diameter and 2 to 4 feet deep. These nests take up to three months to build. The eagles weave together twigs and sticks, and fill in gaps with grass, moss, or other soft material. They line the nest with a layer of lichen or fine woody material followed by a layer of feathers. The female lays eggs several days apart in late February, often when there is still snow on the ground. The eggs hatch in April or May. The young brown birds are able to fly by July at about 12 weeks old. About half of young eagles do not survive their first year, but adults have few predators other than humans, and they can live for as long as 20 years. 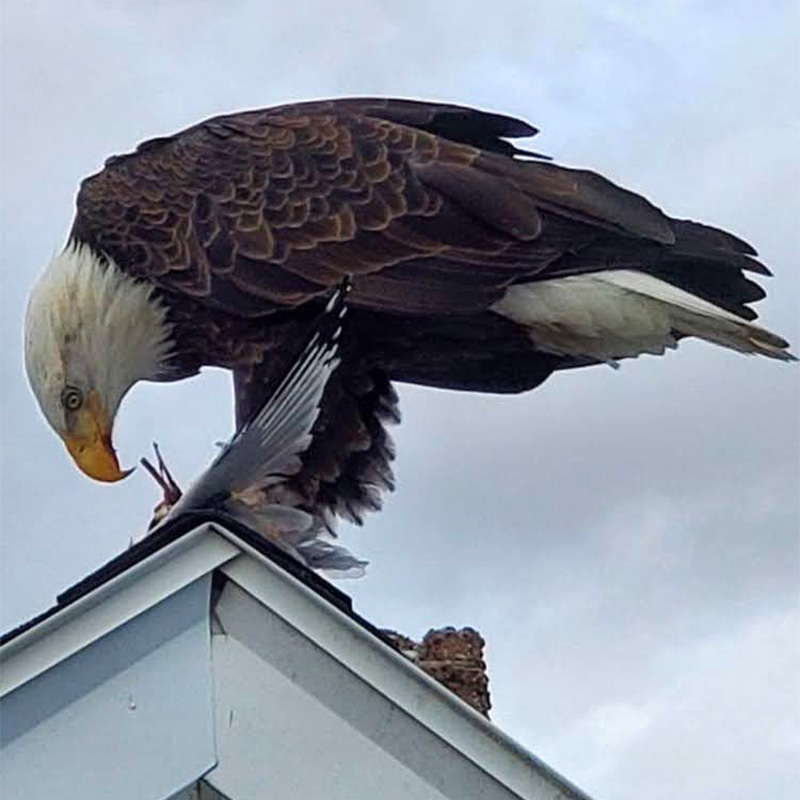 A bald eagle with its prey on a roof in the Ten Hills neighborhood of Somerville. (Photo: Kevin Stone)

According to the National Resources Conservation Service, illegal shooting, trapping and poisoning are leading causes of death for bald eagles today. Other causes include lead poisoning, collisions with cars and power-line electrocution. The U.S. Fish and Wildlife Services allows wind-energy companies that operate turbines to kill up to 4,200 bald eagles a year without penalty. Wind energy is important to meet climate-change goals, but careful siting of the turbines can prevent many bird deaths.

People’s opinions about bald eagles have varied greatly depending on where they lived, what their livelihood was and the era. Today, many people view eagles as majestic raptors that they would like to protect, not just because they are a symbol of our country but because they are a magnificent spectacle to behold. 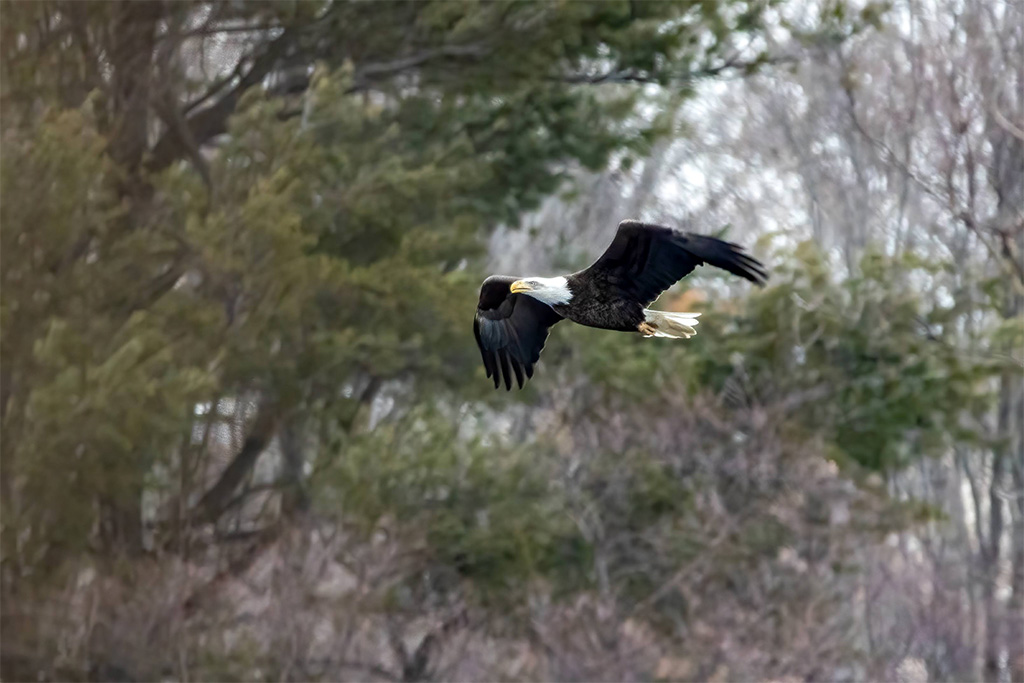 A bald eagle at Fresh Pond in January. Bald eagles usually nest in trees near bodies of water, where they can hunt for fish; however, they will eat whatever food is available. (Photo: Richard George)

Jeanine Farley is an educational writer who has lived in the Boston area for more than 30 years. She enjoys taking photos of our urban wild things. This story was updated Feb. 13, 2022, to correct photo captions.