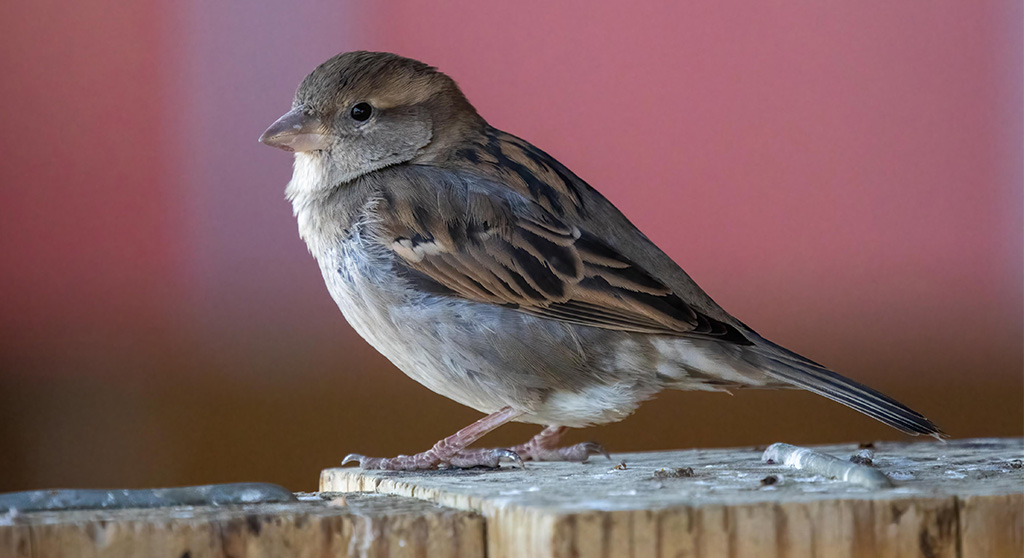 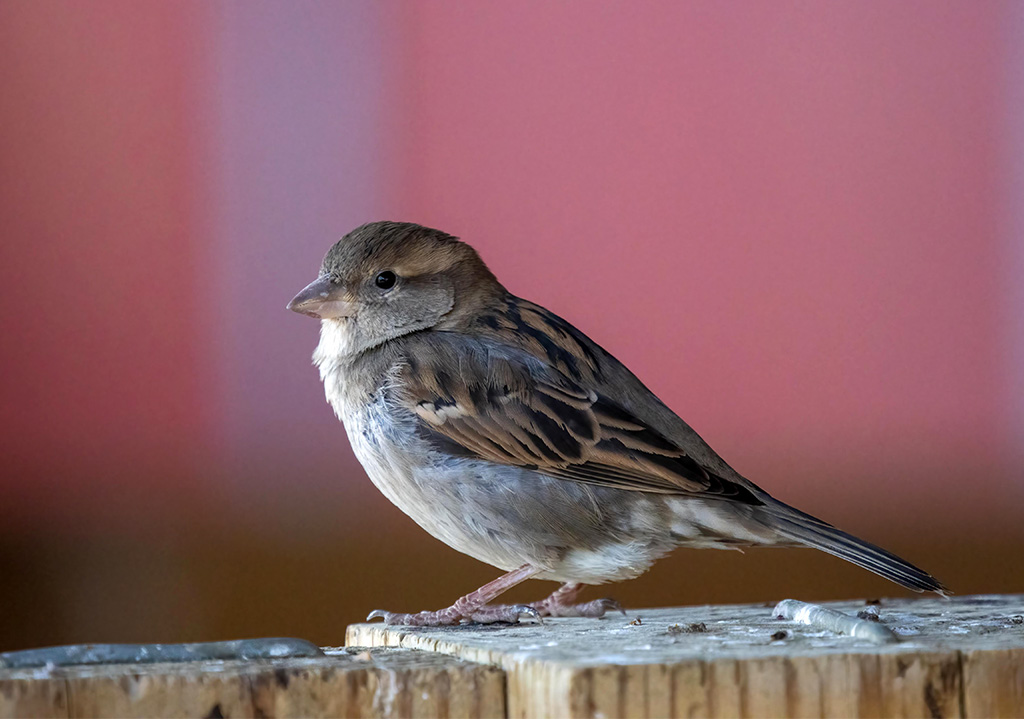 Three hundred years ago, there were no house sparrows (Passer domesticus) in North America. They lived only in the Middle East some 20,000 years ago before following farmers to Europe, Asia and Northern Africa, where they have lived happily now for thousands of years; it was when people brought house sparrows to the United States to help against insect pests that the conflict began.

In the 1850s, linden moth larvae were devouring the trees in New York City. The city imported the house sparrow to fight it, and so did well-meaning people in others: New York; Portland, Maine; Boston; New Haven; and Peacedale, Rhode Island. During the 1860s, city officials in Philadelphia approved the release of 1,000 house sparrows to combat inchworm infestations. In the 1870s, the Cincinnati Acclimatization Society let loose thousands of songbirds including house sparrows to “aid people against the encroachment of insects,” including cankerworms and others. 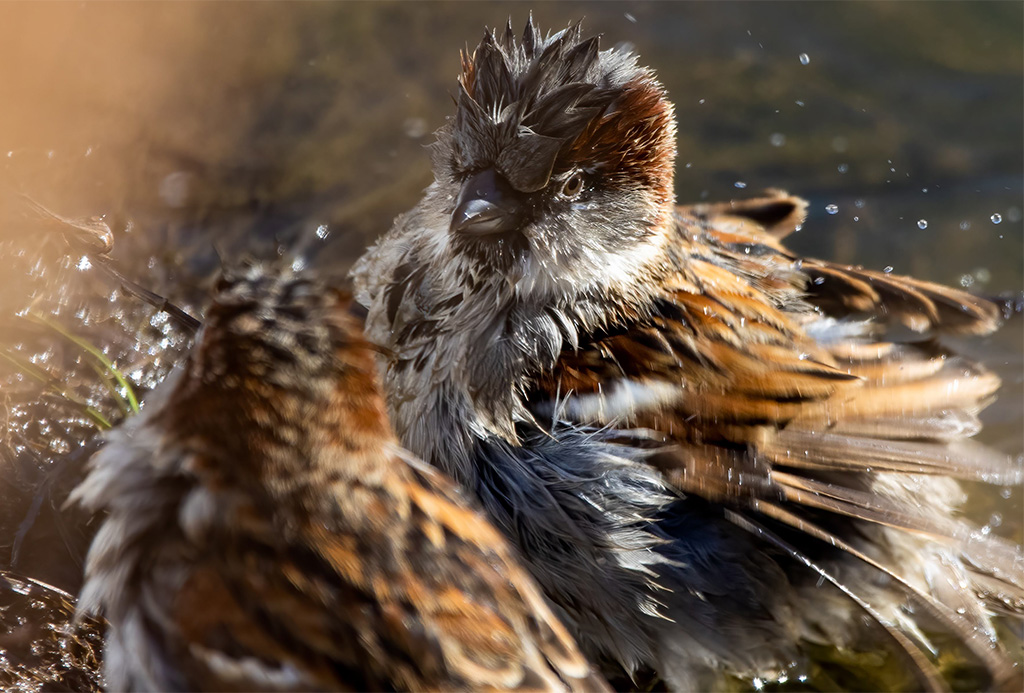 Raising house sparrows even became a fad. Sparrow breeders multiplied, and people put up nest boxes for the birds. According to ornithologist Chandler S. Robbins “from 1855 to 1870 there were a few protests from naturalists who opposed the introduction” of the bird. “These people were outnumbered, however, by those who pressed for more introductions and who provided “nest boxes by the thousand [and] food by the barrel,” and who sought full legal protections for the species.

It was soon discovered, though, that except in the first two weeks of life, sparrows do not often eat insects. They eat mostly seeds and grain – a fact farmers who had welcomed them soon realized. In addition, the birds reproduced quickly and were aggressive, pushing out other species of birds. House sparrows increased their range quickly. 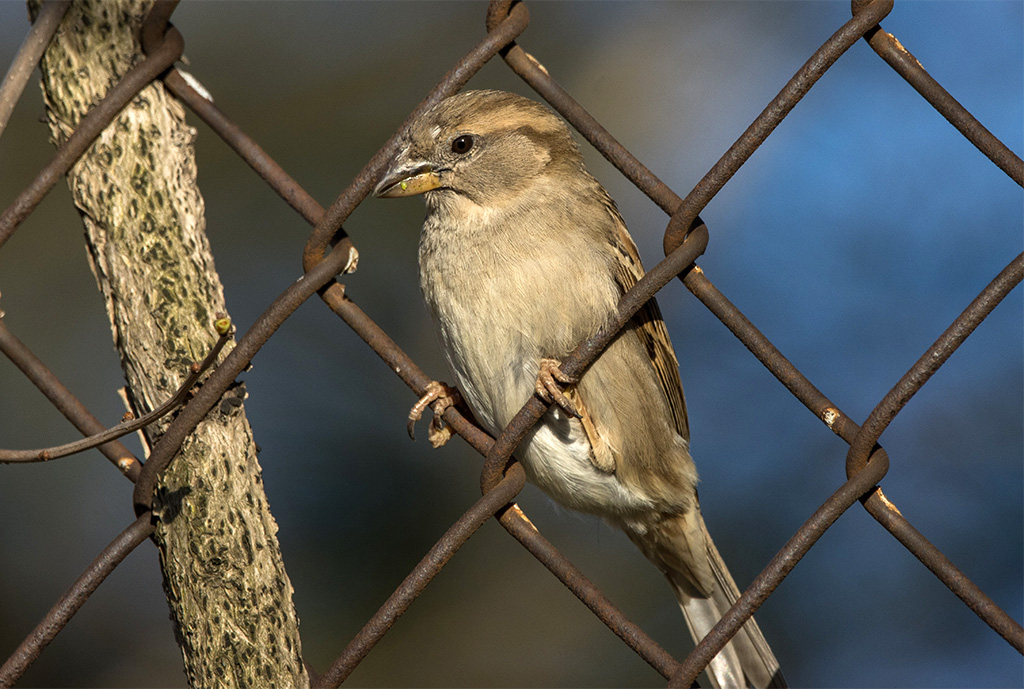 It’s difficult to put the genie back in the bottle. Once house sparrows were released in North America, they were almost impossible to eradicate. According to author John C. McLoughlin, “In the cities of the new nation, the sparrows found an earthly heaven. The ever-present horse droppings, livestock and poultry feed and general garbage, coupled with the vast fields of grain surrounding the cities, made these formerly sparrowless places perfect breeding grounds for the invaders.”

House sparrows are quite social birds, often forming large flocks. They enjoy “social singing,” in which many birds in bushes sing together, and they are at home near human development or agriculture.

The abundance of house sparrows led in the late 1800s to two schools of thought. One group felt that invasive sparrows should be killed by the hundreds of thousands and the other that people should leave the sparrows alone – after all, they did not ask to be brought to this country.

The two sides sparred in what is referred to as the Sparrow War. In the late 1870s, articles appeared in the leading agricultural journals, newspapers, sportsman’s magazines and scientific periodicals condemning or defending house sparrows. On one side was Elliott Coues, an ornithologist and medical doctor who was rabidly anti-sparrow. He did not mince words:

It is very regrettable that the “sparrow question” … should have degenerated into such a miserable personal controversy between the sentimentalists who misrepresent the facts and the ornithologists who understand them. … There is not a scientific ornithologist in America … who is in favor of the wretched interlopers which we have so thoughtlessly introduced, and played with, and cuddled, like a parcel of hysterical, slate-pencil-eating school-girls.

He didn’t seem to think highly of the intellectual fitness of women, old people or children:

The friends of the sparrow in this country fall in the following categories: First, those who know nothing and care nothing particularly about them, except that they “rather like” the pert and brusque familiarity of the birds – a class composed chiefly of children, women and old fogies. Secondly, those who are or were instrumental in getting the birds here … Thirdly, quasi-ornithologists who have been misled into hasty expressions of opinion to which they feel bound to stick.

On the pro-sparrow side were Thomas Mayo Brewer, a Boston physician turned ornithologist, and Henry Bergh, founder of the Society for the Prevention of Cruelty to Animals. For several years, newspapers and scientific journals ran arguments and counterarguments. Brewer wrote about the virtues of the bird. He said that the sparrow was performing the splendid work of ridding American cities of insect pests, as it had for centuries in Europe. He predicted “the house-sparrow will “erelong become one of our most common and familiar favorites.” He said that Coues’ sparrow statements were an example of how “a lie well stuck to” was “as good as the truth.” 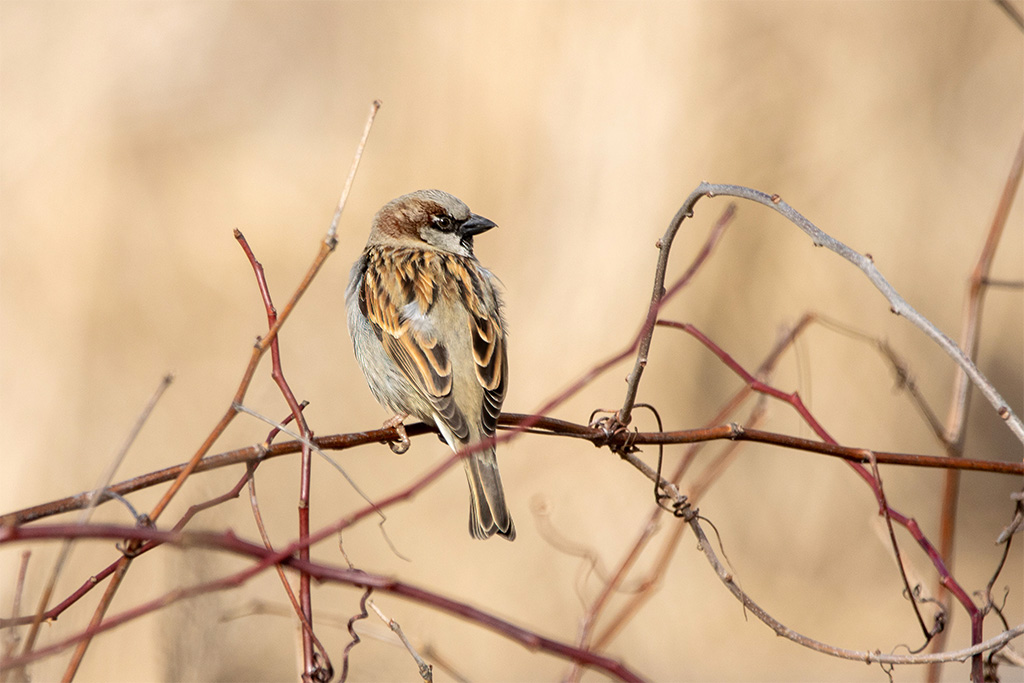 House sparrows are at home around people in cities, towns, suburbs and farms. They are not found in forests or deserts. (Photo: Richard George)

After Brewer died, Coues did not consider the sparrow issue to be settled, and he continued his attacks. Coues wrote that Brewer was a “narrow-minded, prejudiced and tactless person” who had done incalculable harm, and whose name deserved “to be stigmatized as long as there is a sparrow left in the United States.”

But in his later days, after many long years of tirades against the sparrow, Coues began to feel defeated. The population of house sparrows was not declining at all. “I could whip all my featherless foes,” Coues wrote, “but the sparrows proved too many for me.” 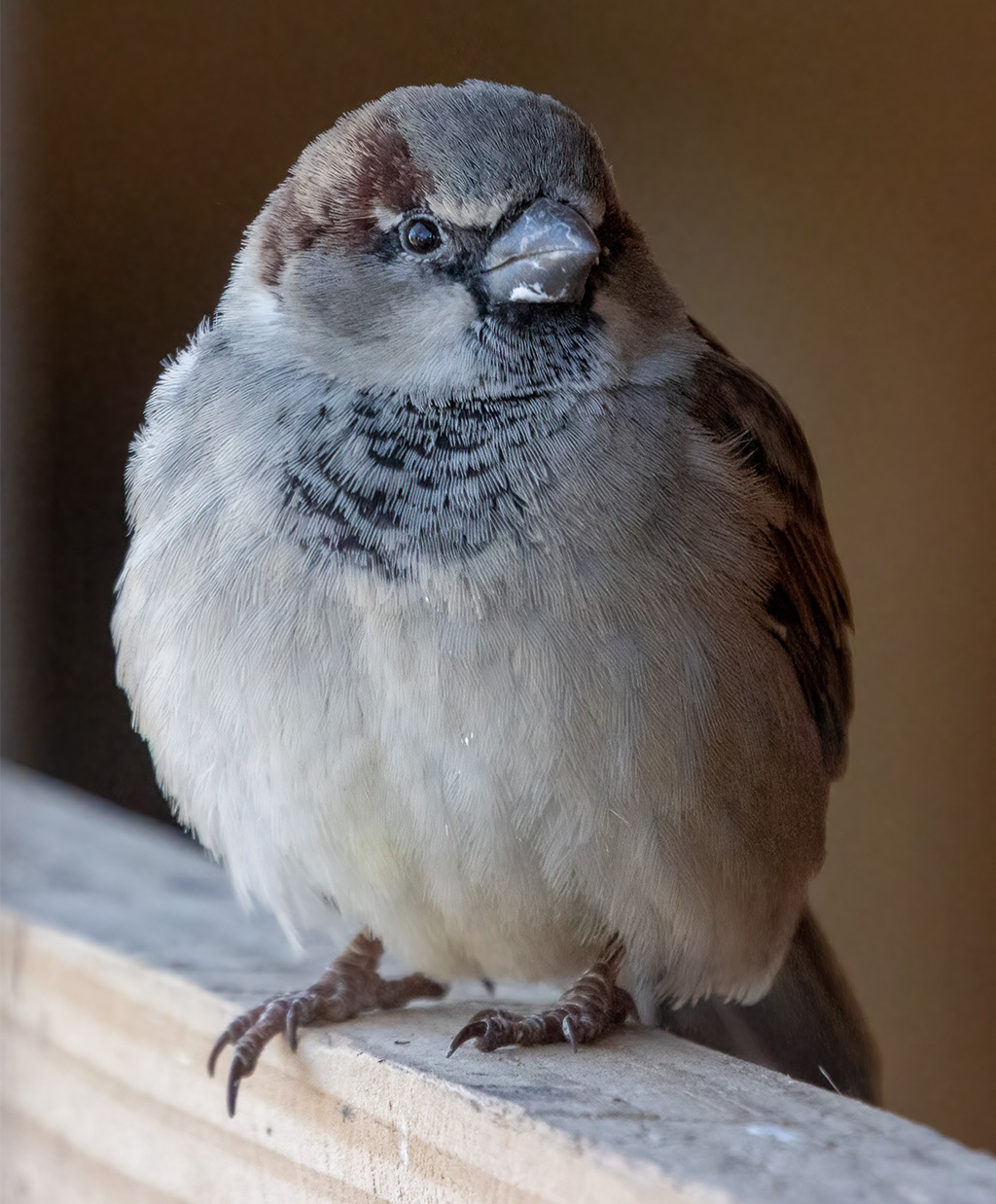 House sparrows are the most widely distributed wild bird on the planet. They are found on every continent except Antarctica. (Photo: Richard George) 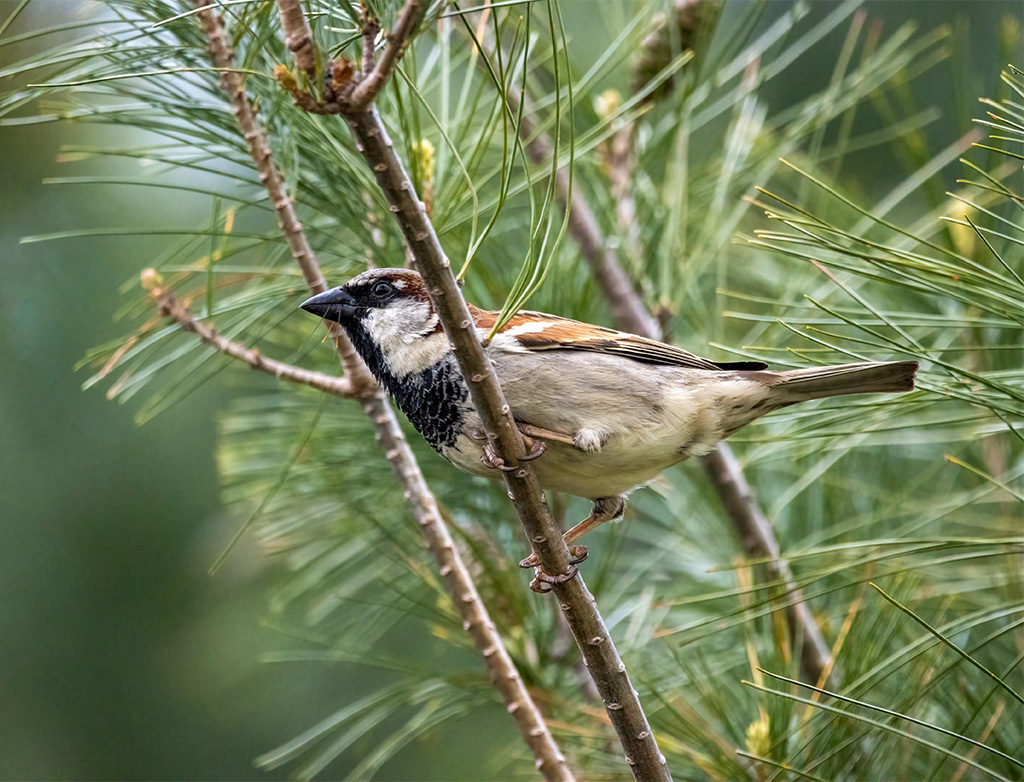 The research shows that sparrow parents are not finding enough insects for their sparrow chicks. “In our study, too many chicks were starving in their nests,” explained Will Peach, of the Royal Society for the Protection of Birds. “Others were fledging but were too weak to live for much longer than that. If the birds nested in areas rich in insects, they did much better.”

Some studies indicate that insect populations have declined by 45 percent in the past 40 years. In 2020, one large meta-analysis published in the journal Science examined 166 studies and concluded that land insects are declining at a rate of 1 percent per year, or 9 percent per decade. Insect decline in urban areas is exacerbated when people grow nonnative plants, destroy large native trees, grow monoculture lawns, and remove green spaces in general. This decline in insect numbers affects many more species of birds than just the house sparrow, however; house sparrows are just the canaries in the coal mine, so to speak. 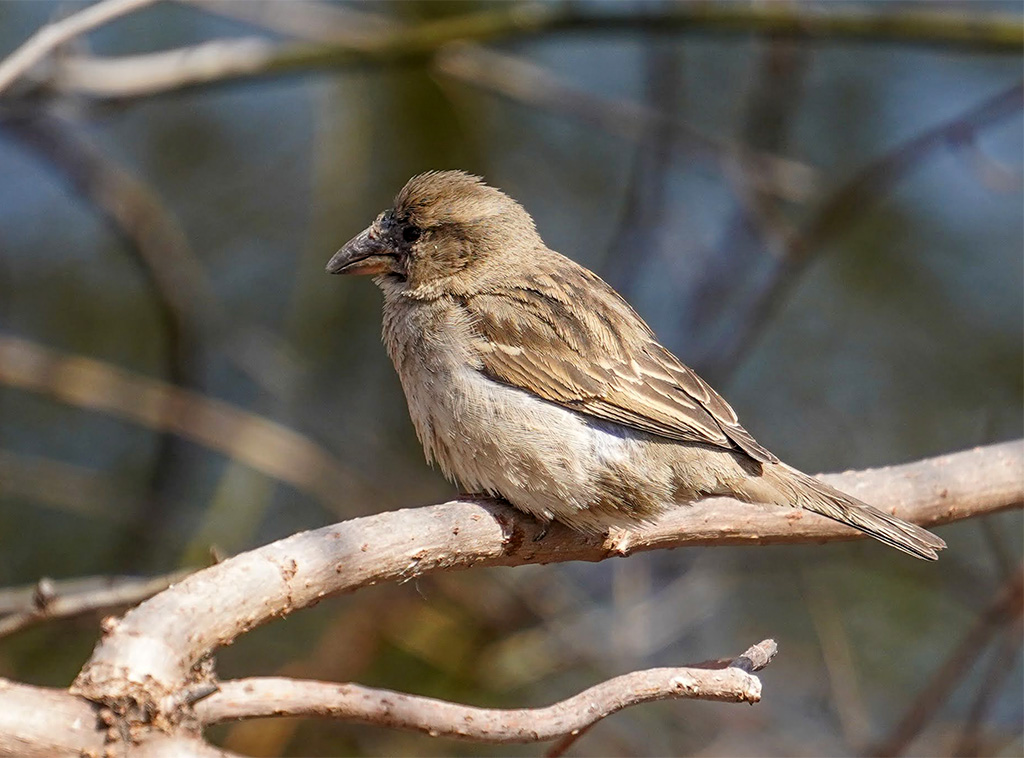 What can one person do to help declining bird and insect populations? In “Eight simple actions that individuals can take to save insects from global declines” from the journal of the National Academy of Sciences, the authors suggest that people convert lawns into diverse natural habitats (even converting 10 percent of a lawn into natural vegetation can significantly aid insect conservation), grow native plants, avoid pesticides and herbicides, limit exterior lighting, use fewer de-icing salts (snowblowers, electric snow-melting mats and sand are less harmful), and more. 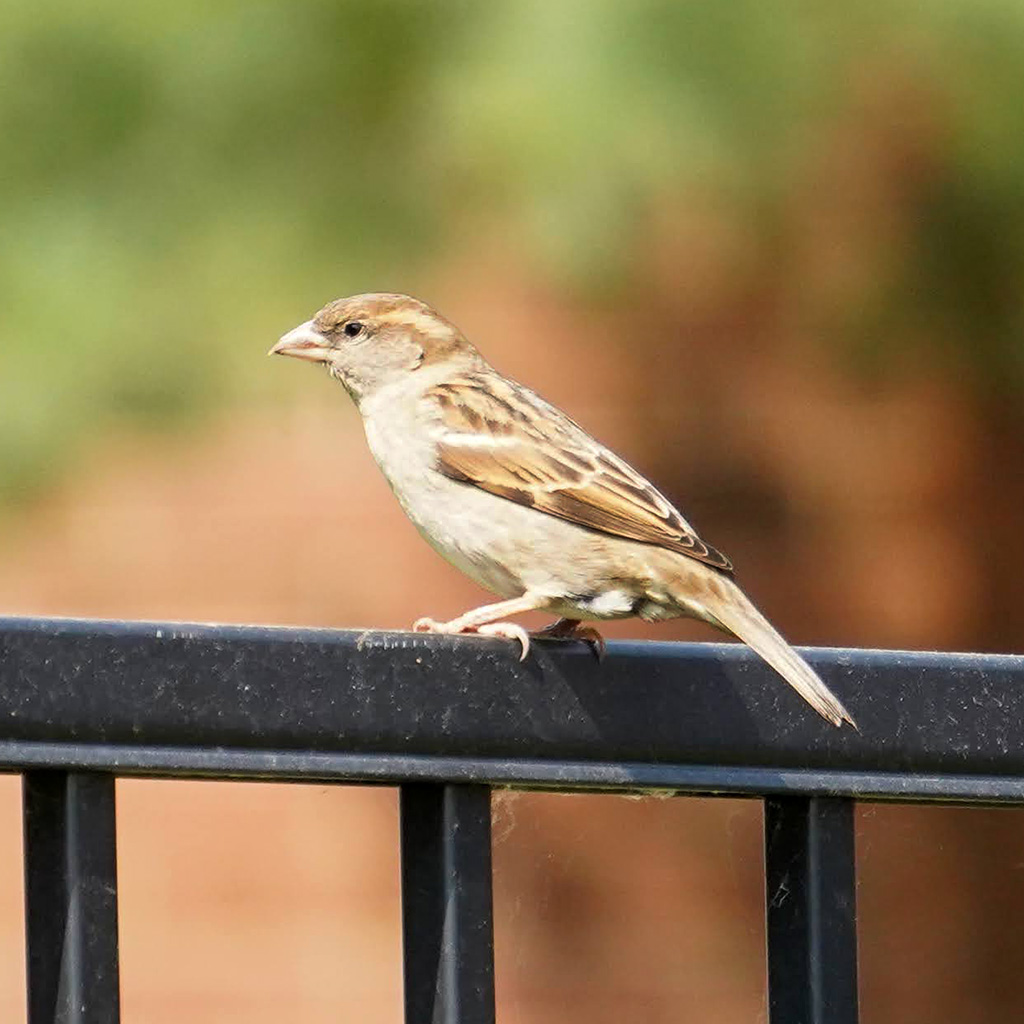 The photo on the video is by Todd Petit via Flickr.