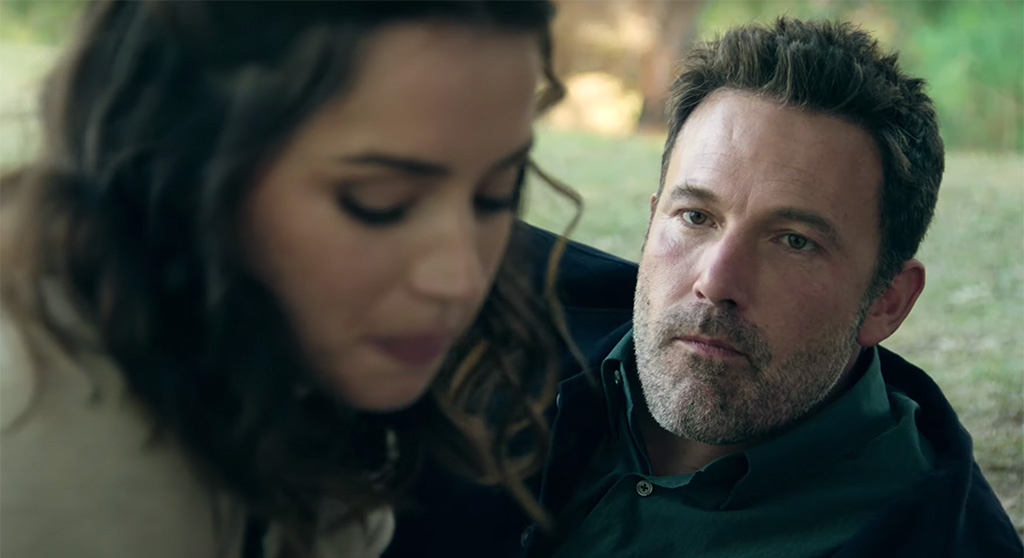 As with all of his projects (a slim eight, believe it or not) Lyne garners an A-list cast with Ben Affleck as Vic Van Allen, a well-to-do entrepreneur semi-retired in his gray-tinted 40s, and Ana de Armas as his vivacious younger wife, Melinda. They live in low-key manse in the bucolic South, where Vic passes much of his time cruising around town on his mountain bike while a well-paid sitter watches their precocious daughter (Grace Jenkins) and Melinda, ever on the go, collects young men. She’s unapologetic about it, with a free-spirited “do as I want” manifesto that we learn about early on when she invites a young Brad Pitt knockoff (Brendon Miller) to the boozy, invite-only birthday bash of a prominent local. From behind a window sash Vic catches a glimmer of Melinda necking with her invitee poolside. His reactions are passively indifferent; others too seem unperturbed – it’s just Melinda being Melinda, or so that’s the vibe. We get to witness her in full force during a wobbly piano-top toast and a rousing rendition of Paolo Conte’s “It’s Wonderful.”

Later at the bar, Vic winds up shoulder to shoulder with the hunk, who thanks him for “letting him spend time with his wife.” What’s going on, you might ask? Do Vic and Melanie have an open marriage? When Vic chases baby Brad, Melinda flies into a rage and demands that Vic invite her paramour in training over for dinner. Cruel games seem to be a thing; there is an apparent uneasy understanding between the two. Even so, there’s a rage in Vic’s eyes that seems to roil under his externally impassive complicity – or perhaps it’s some form of twisted turn-on? Hard to tell by Affleck’s prosaic performance. “If you weren’t married to me, you’d be bored,” Melanie tells Vic in one angry exchange, and you can’t fault her on her logic: Vic looks bored, in need of a kick in the pants, though his odd obsession with snails is almost more curious and profound than the couple’s toxic inner workings. Armas (“Blade Runner 2049,” “Knives Out”) owns the film; her spoiled brat is a hot mess you despise but, at a cocktail party leading a raucous singalong or offering you a glass of bubbly, could easily win you over. Other buff lads who come hither are played by “Euphoria” pretty boy Jacob Elordi and Finn Wittrock. Playwright Tracy Letts patrols the perimeter as a cynical writer new to town who casts a scrutinizing eye on Vic and Melanie.

Given that the film’s based on a 1957 novel by Patricia Highsmith (also made into the 1981 film “Eaux Profondes” starring Jean-Louis Trintignant and Isabelle Huppert), bodies pop up. The first is one of Melanie’s other “friends,” a guy named Malcolm McRae; his name is bantered about early and often, yet we never meet in the flesh – or in the dead, for that matter. To say more about how things go would be to ruin the mystery, but as adapted by Sam Levinson, whose career signature is the erotically raunchy high school drama “Euphoria,” and with Lyne at the helm, it’s really all about the eros.

It’s steamy to be sure, and Armas carries it off with brazen bravado, but the film works only in wisps. I mean, Vic’s got enough green to buy a lux mountain biking chalet in the hills, and I’d imagine he’d likely do well on dating apps, so why deal with Melanie’s in-your-face sexual shenanigans? That question’s never answered, and because it isn’t the whole exercise feels like a slimy snail trail to nowhere. That “yes” is likely more likely a “yeah, right.”