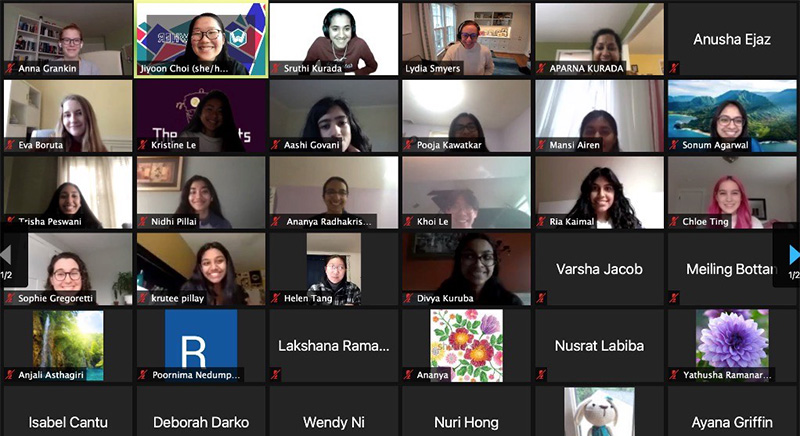 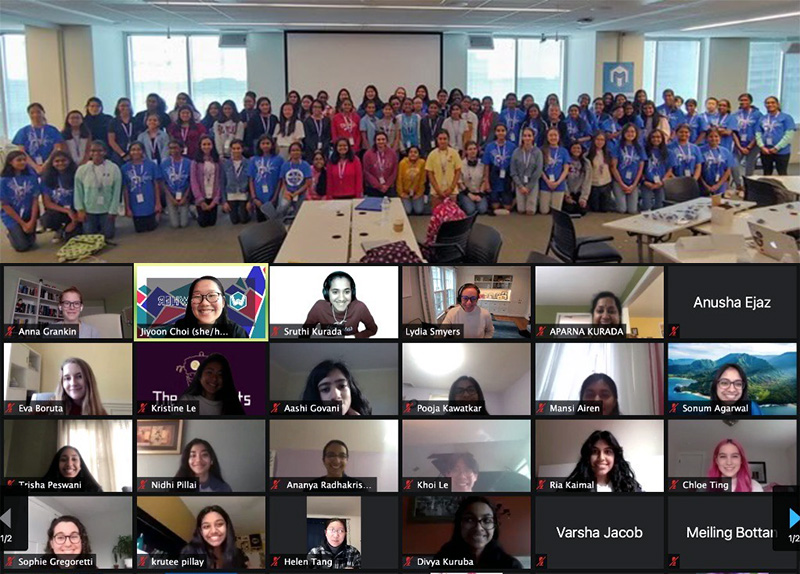 What a MetroHacks’ EmpowHer competition looks like typically, top, and during the Covid-19 pandemic. (Images: MetroHacks)

Girls with an interest in Stem fields are finding new ways to connect and engage through the MetroHacks EmpowHer competition, which draws high school students from across the country and pairs them with mentors. With its second year shaped by the Covid-19 pandemic, it helped 250 teens interact over science, technology, engineering and math topics while school was remote and they weren’t seeing peers face-to-face.

Still, the online format presents some difficulties organizers are working to overcome.

“With EmpowHer being in a fully virtual setting, I do think there have been pros and cons to that,” said Adhrija Anbu, lead marketing director of EmpowHer. “With everyone being able to connect virtually and not having to depend on getting a ride or needing transportation to go meet up, having it be this very time-consuming process, it’s very efficient, the way things are running. But not having that in-person setting can make it quite challenging to be able to get people really connected and involved, which is why we’ve been working very hard to increase engagement with our participants. It’s human nature: When people don’t have something to hold them accountable, it becomes very hard to get them to do what they’re supposed to do.”

That demanded an extra effort for check-ins this year called the director matching process. “It’s not supposed to be entirely about the project but more to get updates about the students and build up personal connections,” Anbu said. EmpowHer does not want directors to be seen as “rigid figures,” but would like to build fluid and friendly relationships.

The competition works by having girls form a team to develop a unique, Stem-related project to collaborate on throughout the year. The groups are paired with mentors who offer them guidance, support and an opportunity to connect. Sruthi Kurada, executive director of EmpowHer, described some of the projects that groups have worked on in the past: An app that detects melanoma, using image recognition. Another to link people to health care resources, inspired by the pandemic and the difficulty in finding information and help and built by first-time coders who created a website from scratch. The previous year’s third place winner made a discovery project for Alzheimer’s disease.

A group of high school students with a passion for Stem – Bhakti Hegde, Sheerin Raina and Geetika Kaul – worked on a project last year aimed at solving the problem of marine animals afflicted by plastic in the ocean. They designed a solar-powered, cylindrical device that identifies animals and emits frequencies that steer the creatures away from piles of garbage in the water.

“It was more focused towards the idea-building than the actual implementation of code, which I thought was really interesting because it showed me that in coding competitions and in coding in general, it’s not all necessarily built on the language that you’re programming in or how complex your code is,” Kaul said. “It’s also very, very targeted toward whatever idea you’re trying to do. You can build something incredible, but if your idea isn’t that great, then whatever code that you build is going to be limited by that. Whatever idea you had was extremely important – it’s honestly more important than the code itself.”

Last year, the competition ran 40 workshops as well as three 12-week session on topics such as Web development, data science with Python and app development.

Hegde, Raina and Kaul said that they have seen the inequality of representation of girls in Stem, even in their classrooms. Kaul said that in her high school Java course, the makeup is about 95 percent boys and 5 percent girls. She understands the concepts and answers questions actively, but when peers are collaborating to solve an issue together, they always turn to the boys in the group.

Going to hackathons has allowed Raina to see young women come together, a reminder that girls in Stem are not alone, she said. Hegde said that she feels hopeful about the way the world of Stem could change for girls.

“I’m actually taking AP Computer Science Principles right now. I was quite surprised to see my class is more of a 60 percent boys, 40 percent girls split,” Hegde said. “In 2020, my school received the AP Computer Science Female Diversity Award, and it brings me joy to see that more females, especially at my school, are becoming interested in computer science. Computer science is a male dominated field, but now that we have programs like MetroHacks and EmpowHer, we’re now more aware of what these Stem programs can provide, and it gives females a better opportunity to indulge in Stem programs like computer science.”

Information on EmpowHer is here.