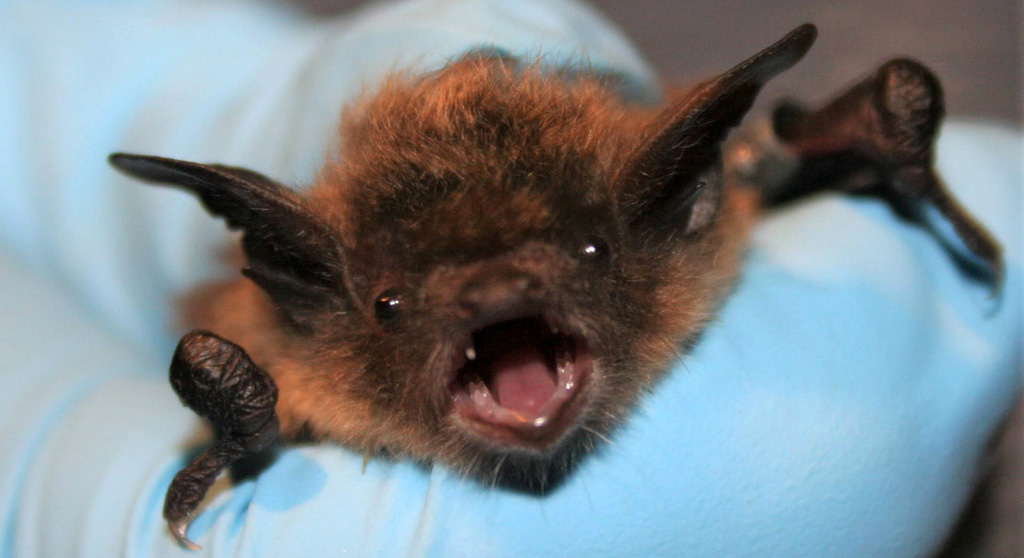 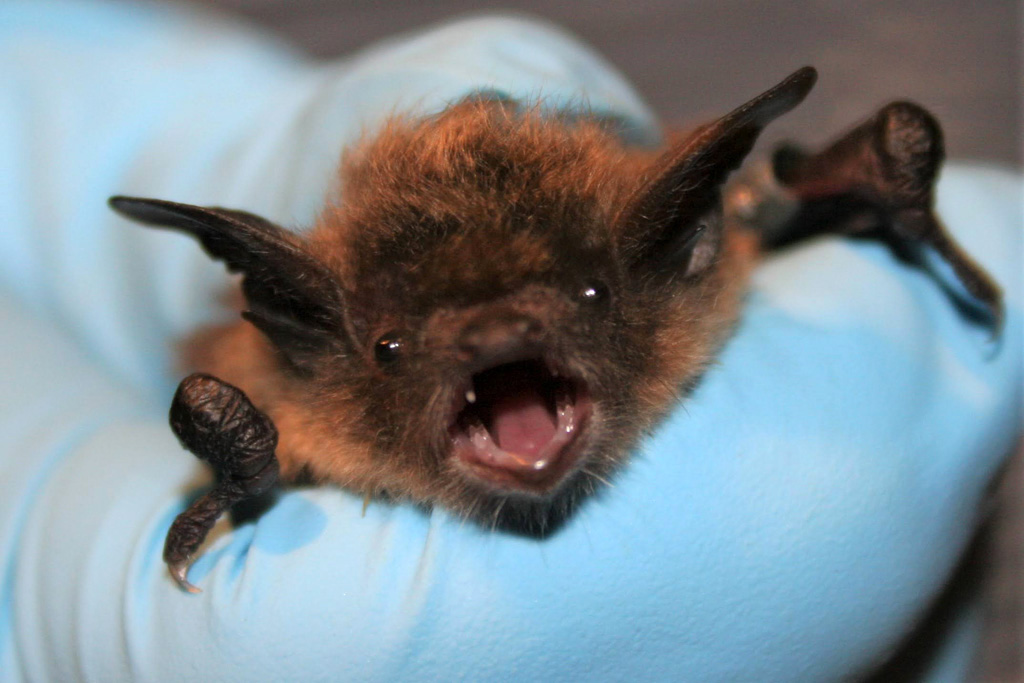 Bats have a bad reputation, but did you know that a bat can eat about a million mosquitoes in one evening? That’s perhaps an exaggeration, but bats do eat thousands of mosquitoes, moths and night-flying insects, since one bat alone can eat 600 insects an hour.

The only flying mammal, bats have elongated finger bones with skin between each finger to form wings. The fingers control the wing’s movement, and make bats more maneuverable than birds. 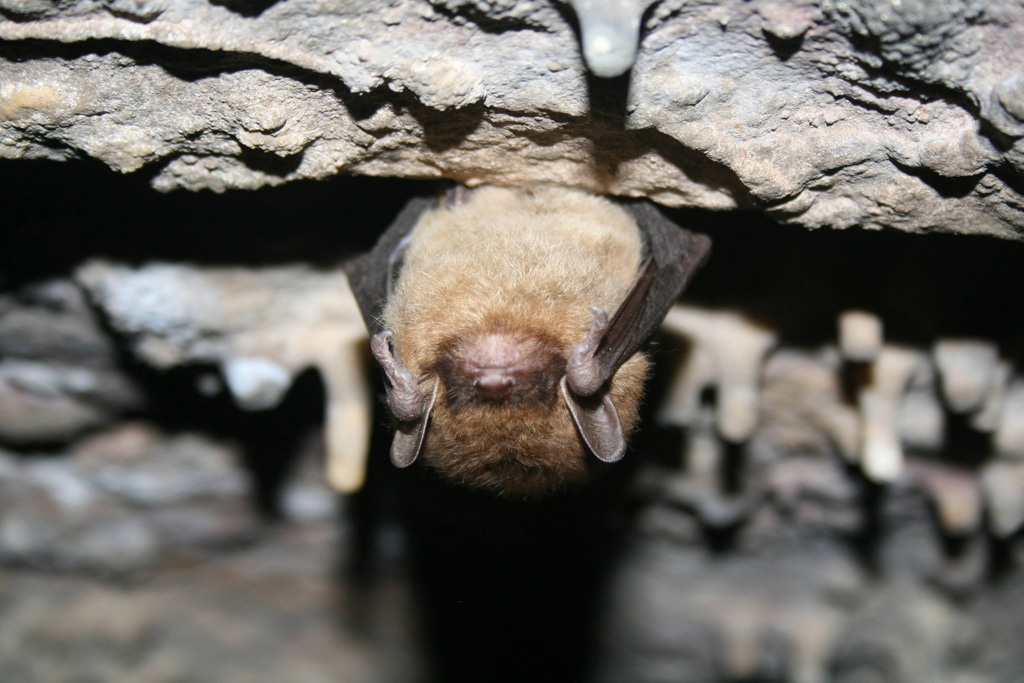 A healthy little brown bat hangs upside down in a cave in 2011. (Photo: Ann Froschauer/USFWS via Wikimedia)

If you see a bat in Cambridge, it is most likely a big brown bat, since these bats do not nest in caves and haven’t had massive drops in their population. Even though bats have a bad reputation, they do more good than harm. Be thankful for the bats that remain, for they help keep our mosquito and insect populations down.

Unlike humans, who can see three colors (blue, green, red), little brown bats see only two: ultraviolet and red. The ability to see ultraviolet is useful for capturing insects, as 80 percent of moth wings, for example, reflect UV light. Little brown bats see best in low-light conditions. Their eyes do not reflect light the way many other animals’ eyes do at night. 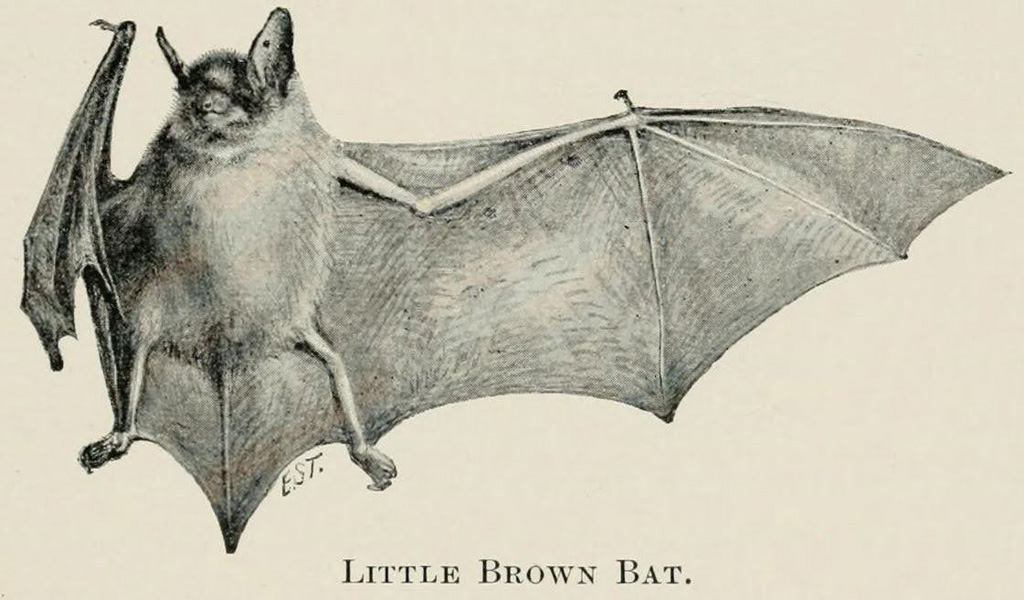 Illustration of a little brown bat by Ernest Seton Thompson from “Four-footed Americans and their kin” by Mabel Osgood Wright in 1898.

In the dark of night or in dark caves, though, bats use echolocation to detect objects as thin as a human hair. When they fly, they emit high-frequency sounds humans cannot hear. These sounds bounce back off of objects to their ears, which allows them to determine where insects or other objects are. A bat may emit 10 to 20 high-frequency sounds as it finds a target insect. It increases the number of sounds to 500 per second just before it attacks its insect prey. (Needless to say, this all happens very fast; eating 600 insects an hour is 10 insects each minute.)

Bats try to avoid flying in the heat of the day because the sun causes their thin wing membranes to overheat. At sunset, bats leave their roosts to begin hunting for insects. At night, the heat their muscles generate dissipates better, and bats are better able to regulate their body temperature. Besides cooler temperatures at night, there are fewer predators to attack them and fewer competitors searching for insects. So it is no wonder bats are nocturnal! 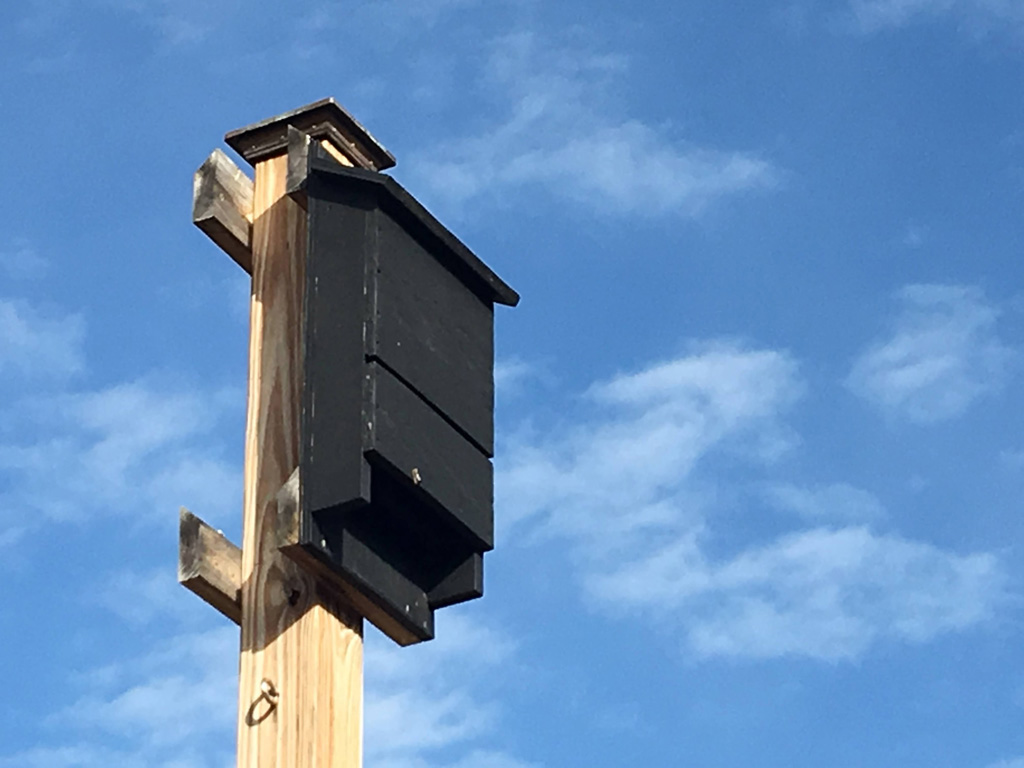 Bat houses mimic the space between tree bark and a tree trunk, where bats like to roost. They are dark in color to retain heat. (Photo: Mark Buckawiki via Wikimedia)

Bats mate in the fall: the female stores the sperm in her uterus throughout her winter hibernation. In the spring, the eggs become fertilized. In June or July, the females gather into nursery colonies where they give birth to one or two offspring. A baby bat attaches itself to its mother’s nipple and clings there for a few days; the mother carries the baby when she searches for insects at night. After a few days, she leaves the baby behind and it clings to a wall or roof. The mother returns several times each night to feed the baby. By three to four weeks, the young can fly by themselves and begin hunting insects.

Baby bat mortality is high: Some babies fall and cannot climb back up. But once they are able to fly, bats typically live about six years and have been known to live for as long as 20. Bats have a longer life expectancy than many mammals of similar size; for example, most rodents live fewer than two years. 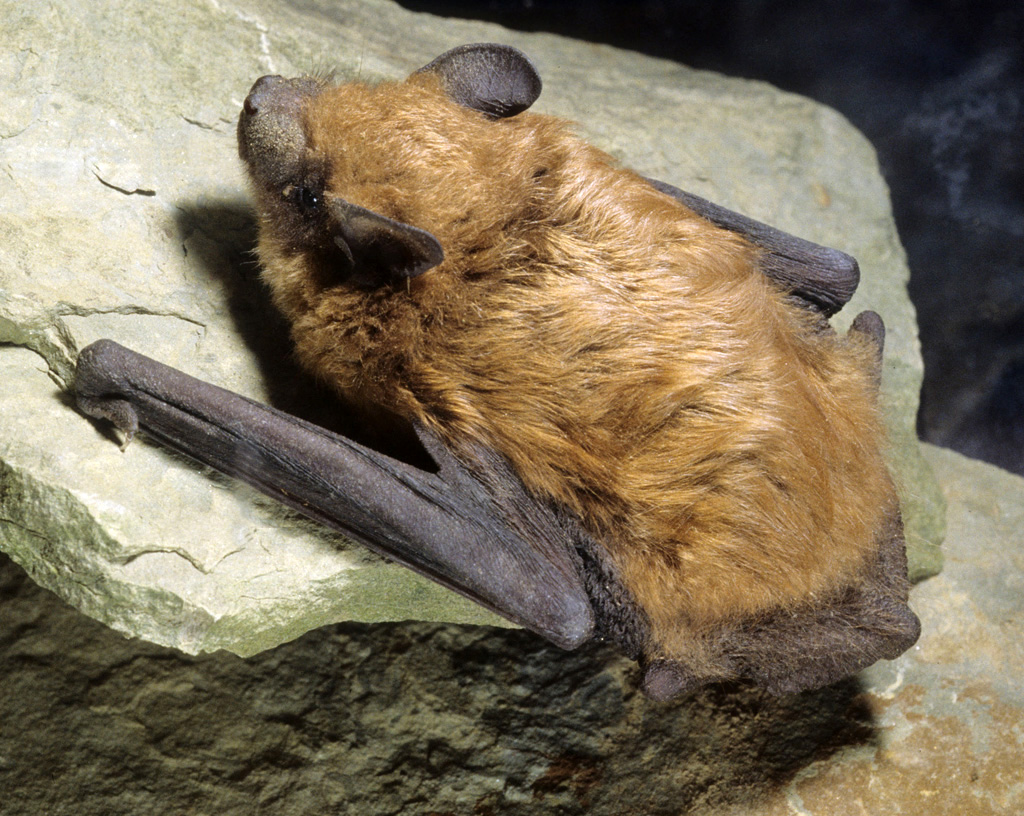 A big brown bat clings to a rock. In late summer, inexperienced young bats might fall down a chimney, fly through an open window or land on the ground. (Photo: John MacGregor via Wikimedia)

In late summer, the nursery colony disbands. Little brown bats move to hibernation caves, mostly in Western Massachusetts, New York and Vermont. Big brown bats hibernate mostly in dry attics or similar places; the few who might have overwintered in caves have been wiped out by disease. Bats choose a place to hibernate that does not fall below freezing. When they hibernate, their breathing slows to one breath every five minutes, and their body temperature is only slightly higher than the surrounding air.

Bat populations are declining around the world. White-nose syndrome alone has killed more than 5 million bats since it was discovered in 2006. The fungus makes a bat’s face look like it was dipped in white powder. The fungus grows best in damp caves, and it is transmitted bat-to-bat or cave-to-bat. People can spread the fungus from cave to cave on their shoes or clothes. Once the fungus reaches a bat colony, the entire colony can be destroyed.

The best time of year to remove big brown bats from your attic is right now in early spring before the bats nest or in August after bat babies are self-sufficient. (Photo: Jim Conrad via Wikimedia)

Attics are the most common home area in which bats roost and gather to raise their young. (Photo: Jim Conrad via Wikimedia)

Under normal conditions, bats have enough body fat to survive as they hibernate through the winter; the white-nose fungus awakens the bats and speeds up their metabolism, though, which causes them to use up their fat reserves as early as February. These bats starve to death.

The largest local bat hibernation site is the abandoned emery mines in Chester. (The emery was used to make emery boards for filing nails, and emery cloth.) During the winter of 2008-2009, about 10,000 bats died of white-nose syndrome there. Only 14 survived. Because of their slow reproduction rate, the population in these caves rose to only about 30 bats, and the surviving bats remain at great risk. 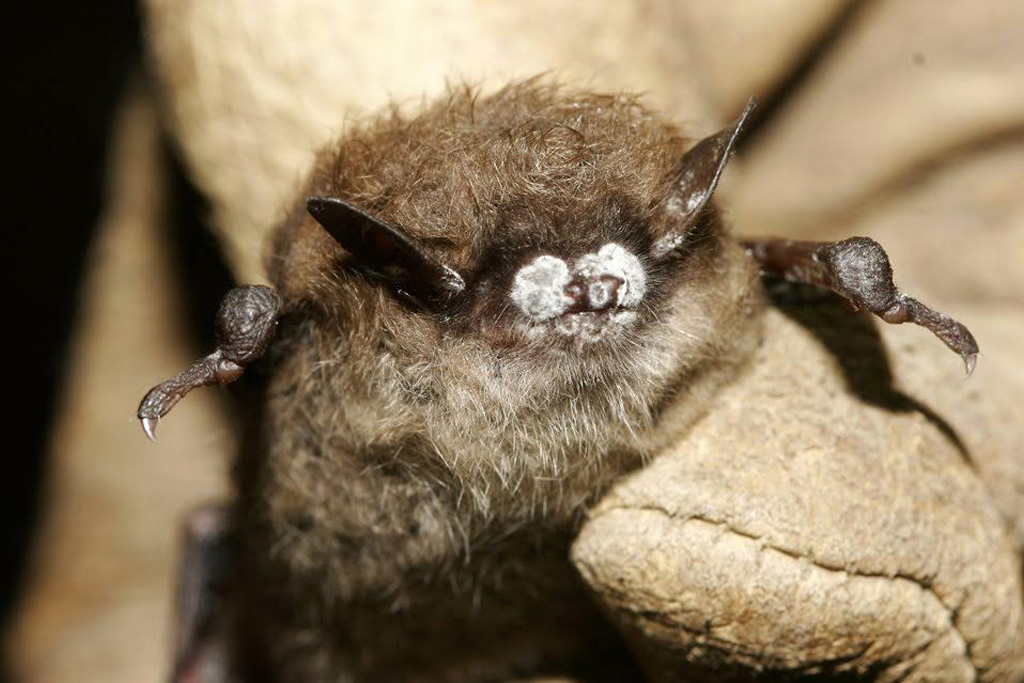 Today the population of little brown bats is only 1 percent of what it used to be, and the fungus is spreading across the nation; scientists believe that if a solution cannot be found by the year 2030, the total national population of cave-dwelling bats will be 1 percent of what it was before 2006. Not since the demise of the passenger pigeon has a species declined so rapidly.

Although unlikely, a bat can carry rabies. If you encounter one in your home, open a window to let it out – if, that is, it hasn’t had contact with anyone inside. Bats have very tiny but sharp teeth, and they can bite sleeping people without waking them up. They can scratch, too. If you are unsure about contact, capture the bat without damaging its head, so it can be tested. Call the state’s Department of Public Health if you are unsure about what to do. A Massachusetts Homeowner’s Guide to Bats has more information about how to evict bats, build bat houses and much more. 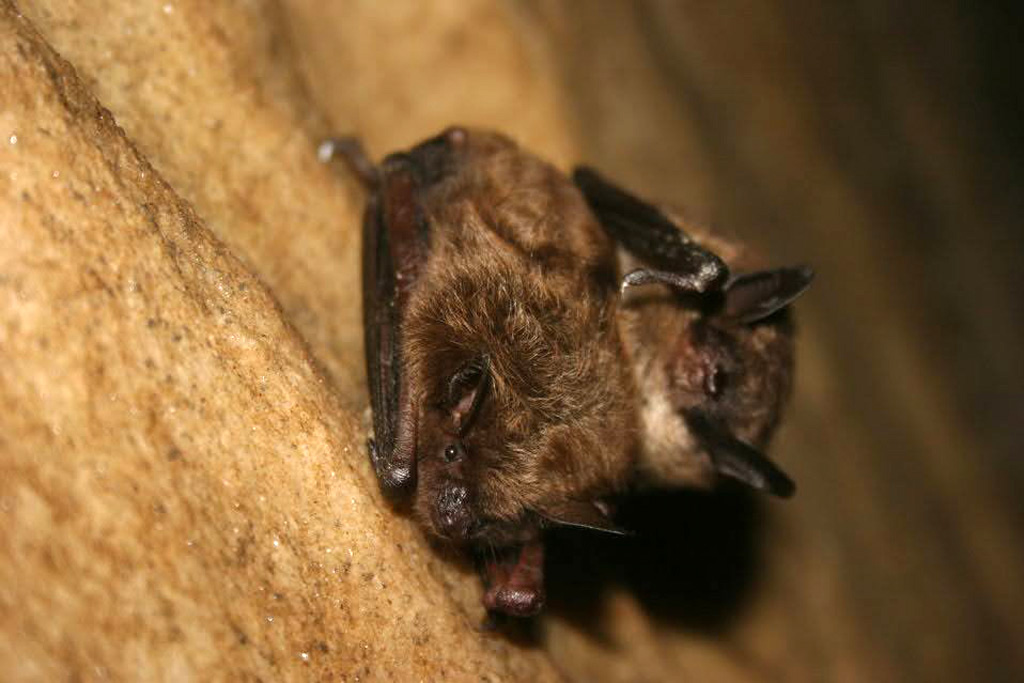 If you see a summer colony of 10 or more bats on your property, MassWildlife would like to know. Because of the catastrophic effects of white-nose syndrome, they are trying to determine survival rates.

Ravenwood media has developed an online game to educate young people about the difficulty of maintaining populations of bats amid white-nose syndrome. The player explores caves for bats, then determines if the bat caves should be protected, researched or open for tourists. I’m not a gamer, but when I played the game, I managed to score a few research points and funding dollars. Alas! My game’s bats all became extinct by the winter of 2023. 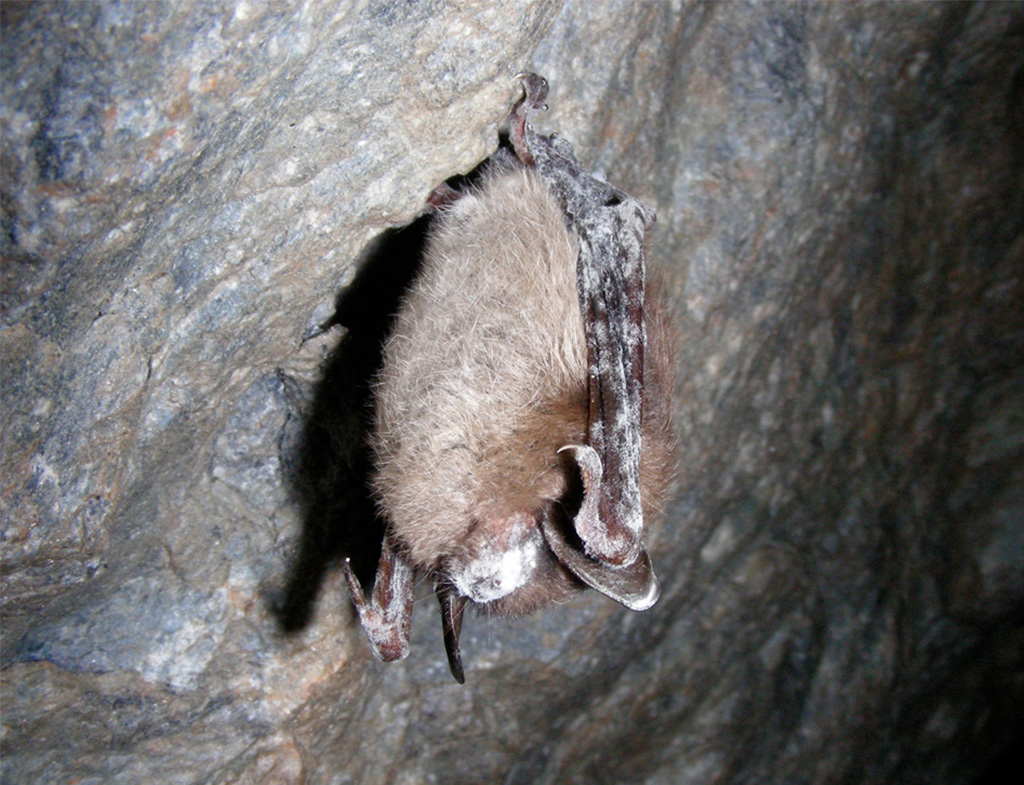 A little brown bat with white-nose syndrome hangs upside down in a Vermont cave in 2009. (Photo: Marvin Moriarty/UDFWS via Flickr)

Feature image is by Richard George