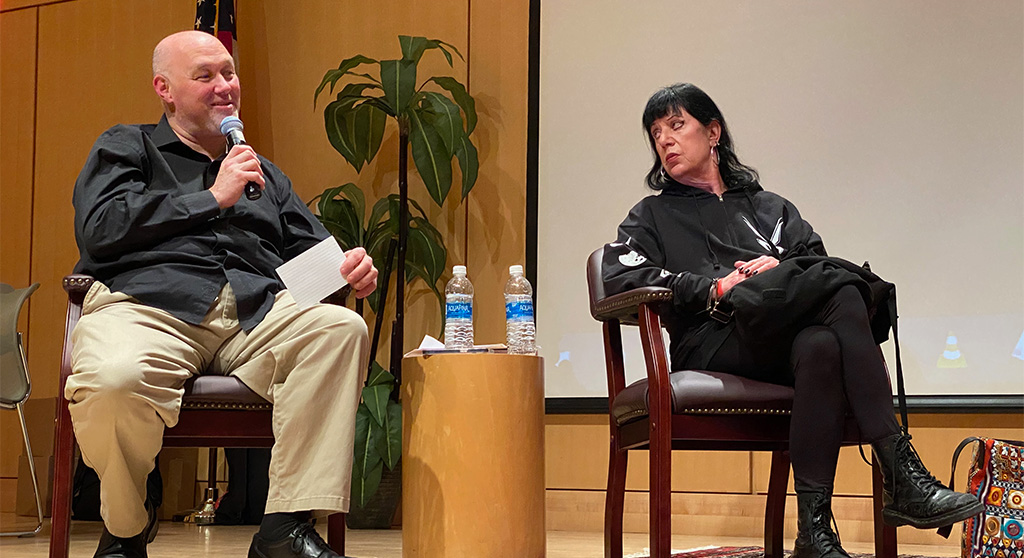 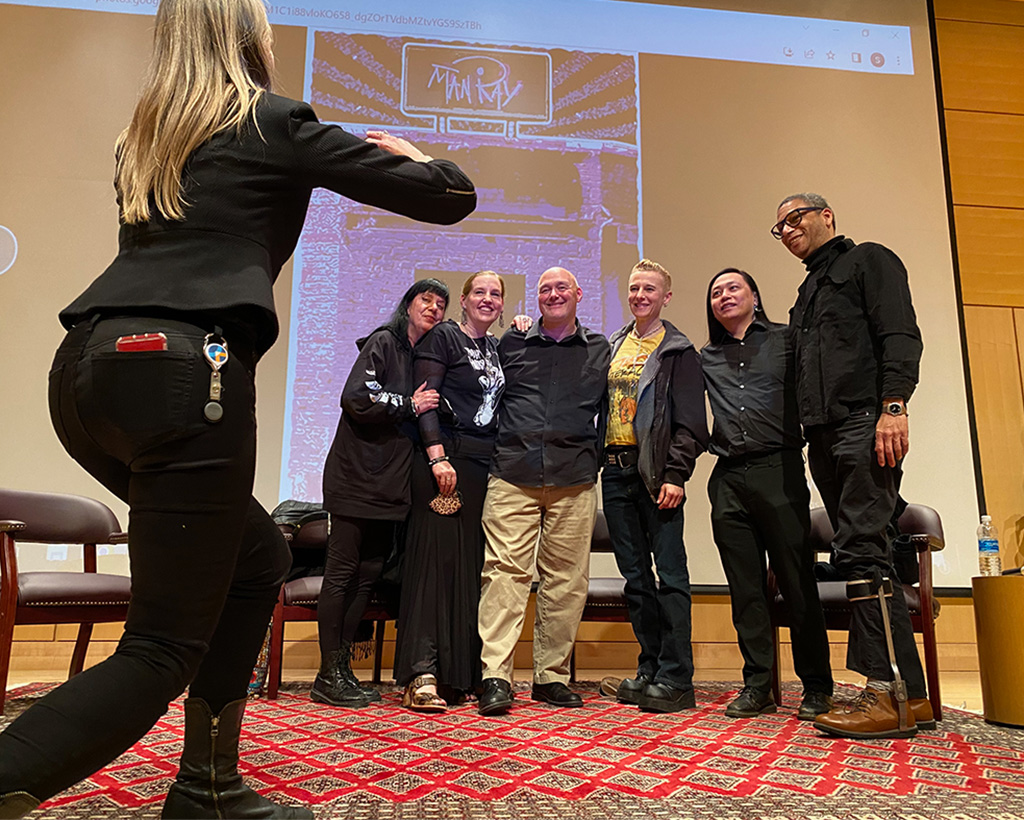 Terri Niedzwiecki is at left among ManRay panelists posing for a keepsake from Wednesday. With her from left are M.J. Pullins, Shawn Driscoll, Emily Sweeney, Tony Lee and David “Daisy” Crowder. (Photo: Marc Levy)

The revived ManRay nightclub in Central Square is “like 98 percent done” after months of construction, but is being held up by red tape from city inspectors, bartender Terri Niedzwiecki told the audience at a Wednesday panel discussion.

“It’s just a couple of – in my opinion – stupid things. Which is why I don’t go in the building department anymore,” Niedzwiecki said as part of a panel discussion, “Central to It All: A Look at Central Square, the Nightclub ManRay and 20 Years of Change,” held at the Cambridge Main Library.

“The powers-that-be in Cambridge have different opinions on what should be and what should not be, and can’t seem to come together. And it’s a really stupid thing that could be done in a week to get the last building inspection so we can get a clearer idea of when we’re open,” Niedzwiecki said. “But if you thought City Hall moved slow before, ooh, it’s worse.”

ManRay, a nightclub, bar and goth fetish scene, lasted at 21 Brookline St. in Central Square from 1983 (starting as Campus, with ManRay emerging two years later) to July 2005, when its distinct, bunkerlike structure was razed to make way for condos. Owner Don Holland tried several resurrections in Central Square over the years and in 2021 finally secured 40 Prospect St., a space the ImprovBoston comedy club vacated in 2020 under financial pressure from the extended coronavirus lockdown. 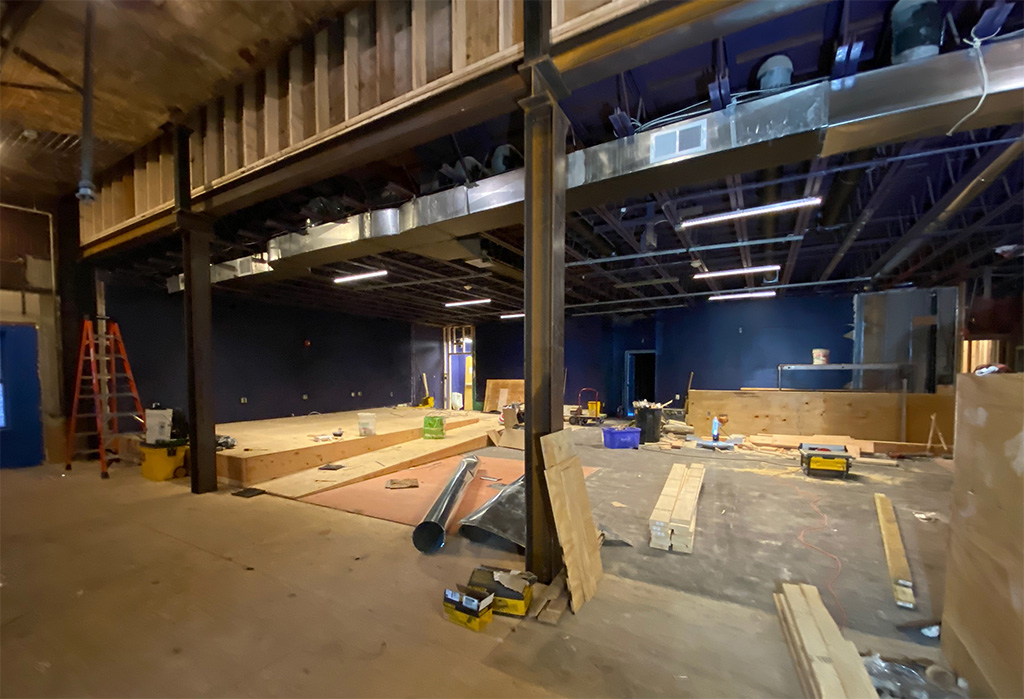 While construction got underway, Shawn Driscoll published the book “We Are But Your Children: An Oral History of the Nightclub ManRay.” He moderated the Wednesday panel, where club regulars and wannabes shared stories of the bands they danced to, how they shopped and primped for nights out, the respect for privacy demanded by the nature of the club – which is why there are so few ManRay photos today, they said – and the sex acts they stumbled across in wilder times. There were also questions about the new ManRay, which was originally intended to open in October.

“No problem getting [construction] workers, which surprised me, but a bucket of blood trying to get any kind of equipment,” Niedzwiecki said, meaning pandemic-era supply chain issues have taken a toll on Holland’s vision for the space. Describing his call for glass-fronted fixtures, she said, “finally, it was, okay, we’re been waiting a month for these. It’s time to make concessions.”

But the club sound system is installed. “I’m going to speak for Chris, this is the best sound system even [taking into account] New York,” Niedzwiecki said, referring to DJ Chris Ewen, now on tour with his band The Magnetic Fields. “He’s like, you’re gonna be bitching me all night, ’My ovaries, my ovaries!’”

When the public can experience the club themselves is unknown.

A front desk worker on Friday said such delays are standard: “There are people still waiting a week to get their permits issued or a response.” When asked if the information would be available had The Boston Globe called seeking it, Rosario said, “I suppose.”

Update on May 10, 2022: In a reply nine business days after being asked about ManRay, city spokesman Lee Gianetti said inspectors were on-site with the owner of the establishment the previous Thursday “to explain which outstanding items still need to be completed and help them through the remainder of the process.” There were “open/pending” permits on building, electrical, plumbing, sheet metal, mechanical and sprinkler issues, Gianetti said.

“Heartbreak” of dealing with city

Though the City Council has repeatedly prioritized making permitting and inspections more frictionless, and city staff have spoken of implementing procedures and software to comply, business’ accounts of the process citywide often sound like ManRay’s.

After more than 20 years in the industry with restaurants in Boston and from Chicago to the South, “I’ve never in my life had heartbreak like I had with trying to do this – just the sheer inefficiency or lack of communication and piecemealing of everything,” the restaurateur said. “What I don’t think they understood is that every day we got pushed back put the survival of this restaurant at risk.”