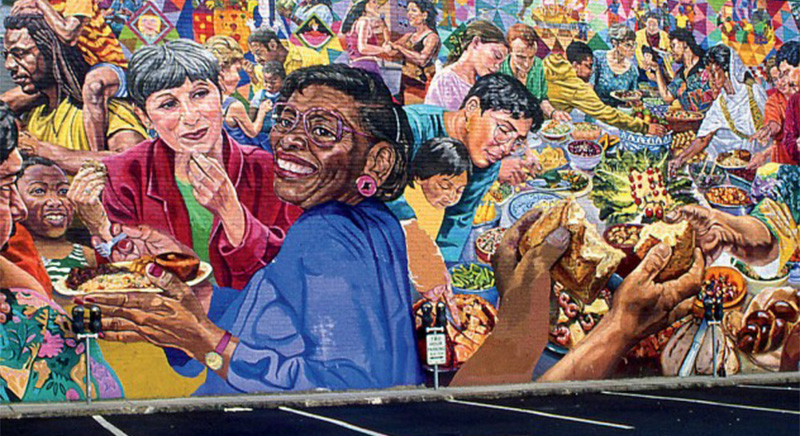 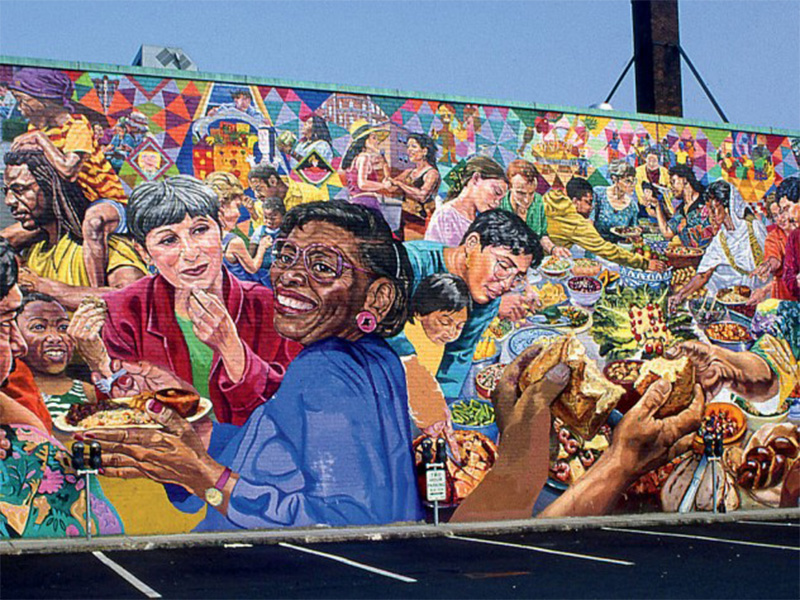 “The Potluck” is a 2,000-square-foot mural by David Fichter and painted more than 60 others. (Photo: History Cambridge)

As a source of physical and emotional sustenance, food is tied intricately to our survival as individuals and as a community. During the 20th century, food also played an important role as a means by which Cambridge visitors and residents could learn about and connect with their neighbors across racial, ethnic and class lines.

On Sunday, History Cambridge hosts a food tour of Central Square featuring tastings and behind-the-scenes stops at La Fábrica Central, The Middle East and Artifact Cider Project. We will sample delicious food and drinks and hear from insiders at each stop about their history in Central Square and their work in the community. Between stops, the tour will highlight locations and moments in Cambridge history in which the sharing of ethnic cuisines helped raise awareness and understanding of the area’s rich cultural mosaic. This tour is based on a guided tour History Cambridge debuted in the fall, when we explored the food and immigration experiences of Cambridge residents from Lebanon, India, Tibet, the Dominican Republic, China, Syria and Eritrea.

As waves of immigrants arrived from all corners of the globe, Cambridge as a whole – and Central Square in particular – expanded its culinary horizons to include the cuisines of these new Cantabrigians who had come to work, study and live in an increasingly diverse city. Restaurateurs diversifying to meet the demand for a broader array of foods let native-born Cambridge residents expand their palates, learning about the cuisine and the culture of their immigrant neighbors.

At The Middle East, traditional Lebanese food has helped remind immigrant diners of the cuisine they left behind and introduced many Cantabrigians to the cuisine. Food has been a natural convener of Tibetans in exile, and the establishment of Rangzen Tibetan Place and other Tibetan restaurants in the area has allowed immigrants maintain ties to their ethnic heritage while also building community ties with residents of other backgrounds. And the combination of food and music at La Fábrica Central makes it a gathering place for Dominicans from across the region to come together, as well as for non-Dominicans to experience Latin American and Caribbean cuisine. 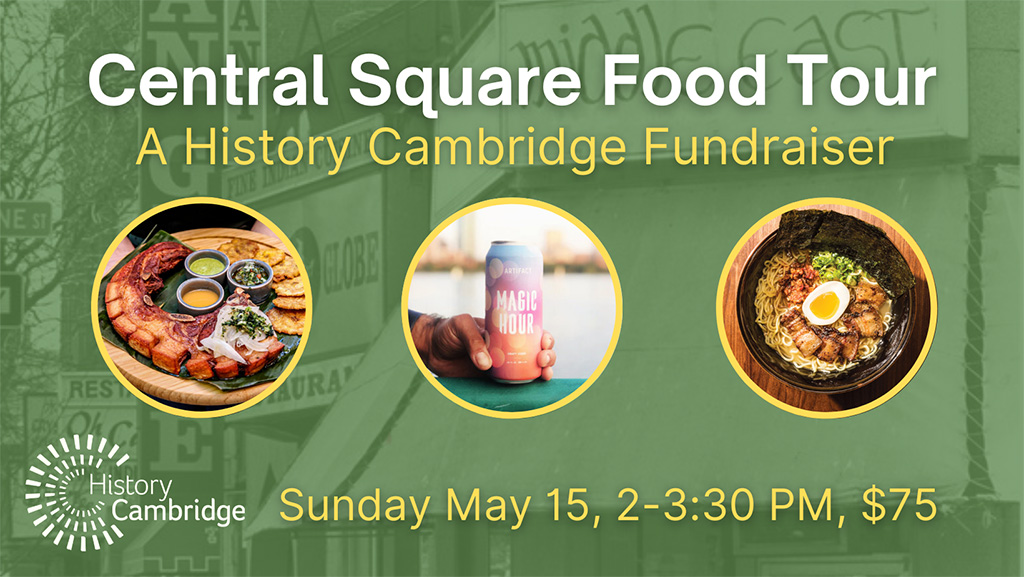 Public art depicting food and shared meals also plays an important part in the culture of Central Square and will be featured on the tour.

One side of the Middle East features the “Crosswinds” mural by artist Daniel Galvez. Painted in 1992, this mural depicts the diverse community of Central Square, with some of the figures based on real locals. “I love Central Square. You hear different accents wherever you go, smell different spices in the ethnic restaurants. There’s a wonderful multicultural spirit here, and I’m trying to capture that,” Galvez said. In Cambridge – and Central Square in particular – public art is often short-lived as artists repurpose or replace what has come before. But “Crosswinds” proved so enduring and beloved that Galvez was asked to restore it in 2017, making it one of the longest-lived murals in the city.

“The Potluck” is a 2,000-square-foot mural designed, painted and imagined by Cambridge artist David Fichter and more than 60 others, including many locals. It illustrates a potluck scene with residents from The Port neighborhood and is meant to display a multi-ethnic image of the community. Many of the faces depicted represent community members who stopped by as he was painting, Fichter said in one oral history. Fichter’s choice to portray residents sharing a communal meal highlights the ability of food to bring people together and the diverse food traditions of Central Square.

Through its restaurants, public art and engagement with the broader Cambridge community, Central Square has become a prime location for those seeking good food, good company and the experience of a dynamic, multicultural destination. The stories many of these people and institutions tell are the stories we at History Cambridge want to collect and share. Join us Sunday to eat, drink, learn and support our mission to tell the stories of all Cantabrigians.