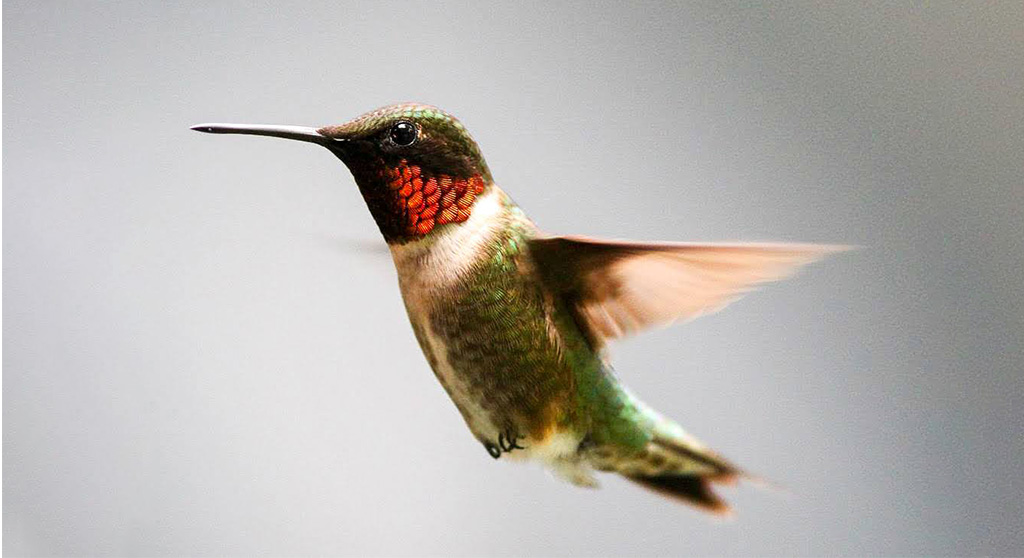 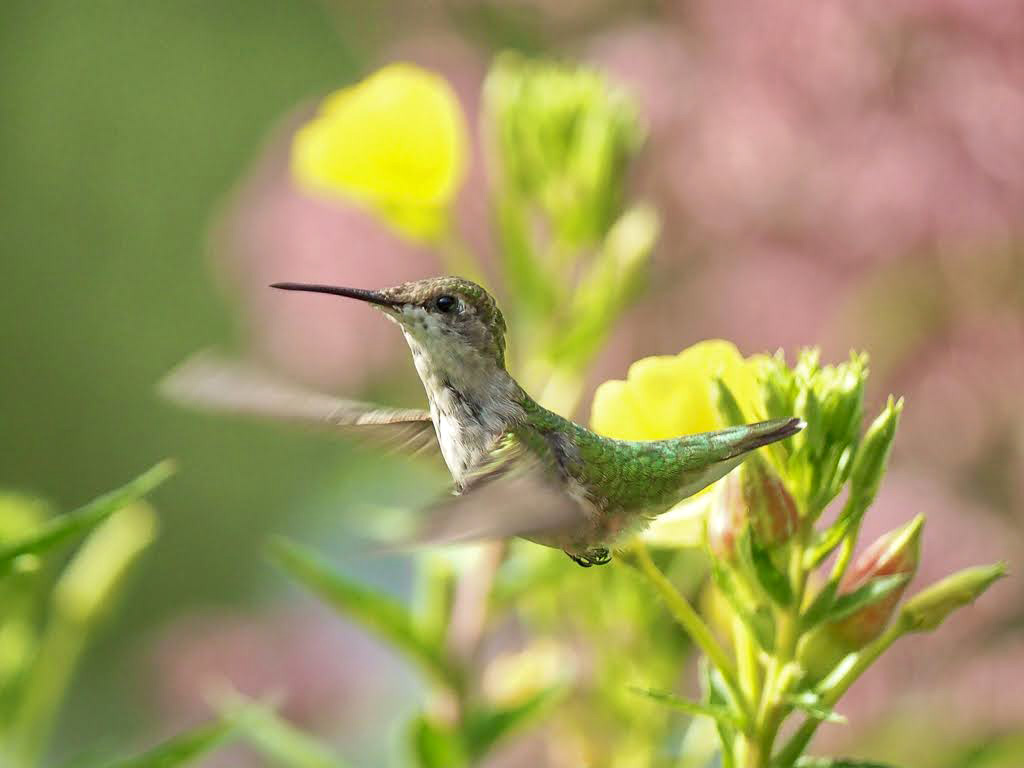 Ruby-throated hummingbirds are solitary, not social, except during courtship, which is brief – lasting only a few minutes. (Photo: Ingrid Messbauer)

When Europeans arrived in North America, they had never seen a bird like a hummingbird, so they wrote eagerly about this remarkable sight:

The Humbird is one of the wonders of the Countrey, being no bigger than a Hornet, yet hath all the dimensions of a Bird, as bill and wings, with quils, Spider-like legges, small clawes: For colour, shee is glorious as the Raine-bow; as shee flies, shee makes a little humming noise like a humble bee: wherefore she is called the Humbird. (William Wood, New England’s Prospect, 1634)

A couple of years later, in 1637, Thomas Morton wrote in New English Canaan: “There is a curious bird to see to, called a hunning bird, no bigger then a great Beetle … His fethers have a glosse like silke, and, as hee stirres, they shew to be of a chaingable coloure.” 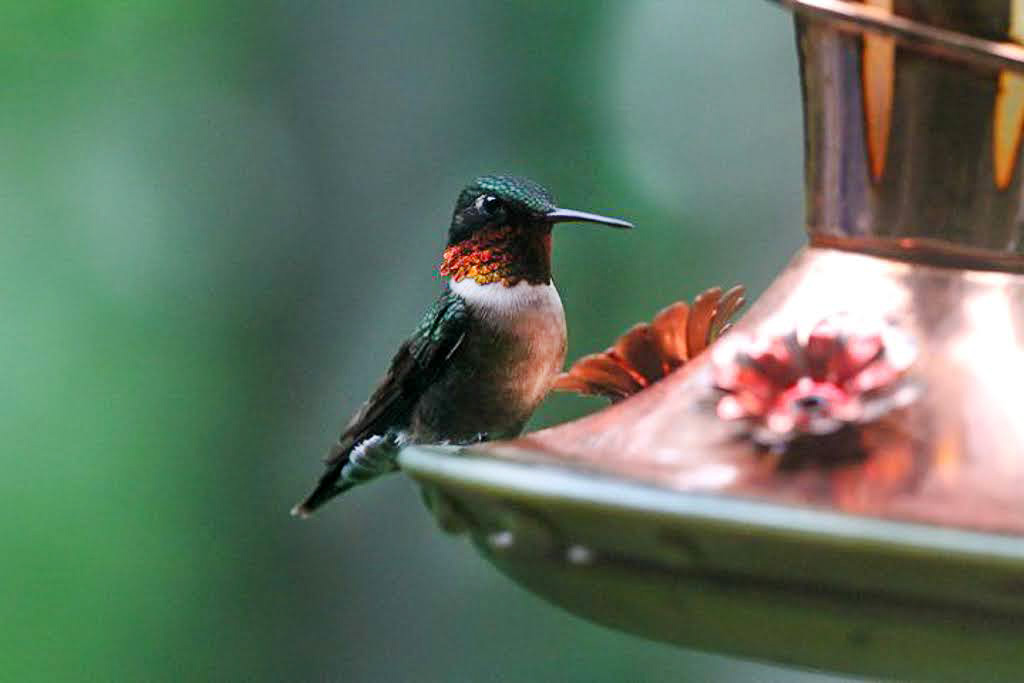 Hummingbirds such as this male ruby-throated nest in forests, but you can often see them drinking nectar at feeders or visiting flowers in gardens. (Photo: Sean Werle) 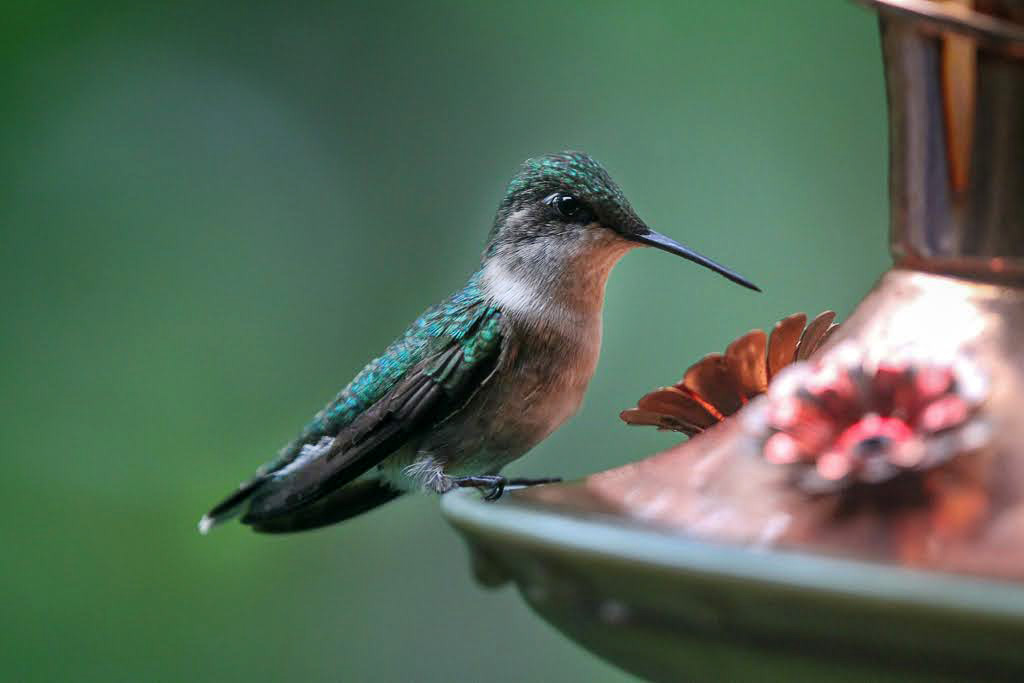 As Wood noted, hummingbirds are named for the humming sound their wings make when they fly or hover. Our native ruby-throated hummingbirds (Archilochus colubris) flap their wings up to 53 times per second. It is not surprising, therefore, that they need a lot of food energy to survive. A hummingbird must consume more than its weight in insects and nectar each day to stay alive.

Hummingbirds are native to North and South America, which is why they were such a novelty to European explorers. The ruby-throated hummingbird is the only species that nests and breeds in our region. Each spring, they fly 1,000 to 2,000 miles from Florida, Mexico or Central America to arrive in Massachusetts, where they live and breed from May through September. 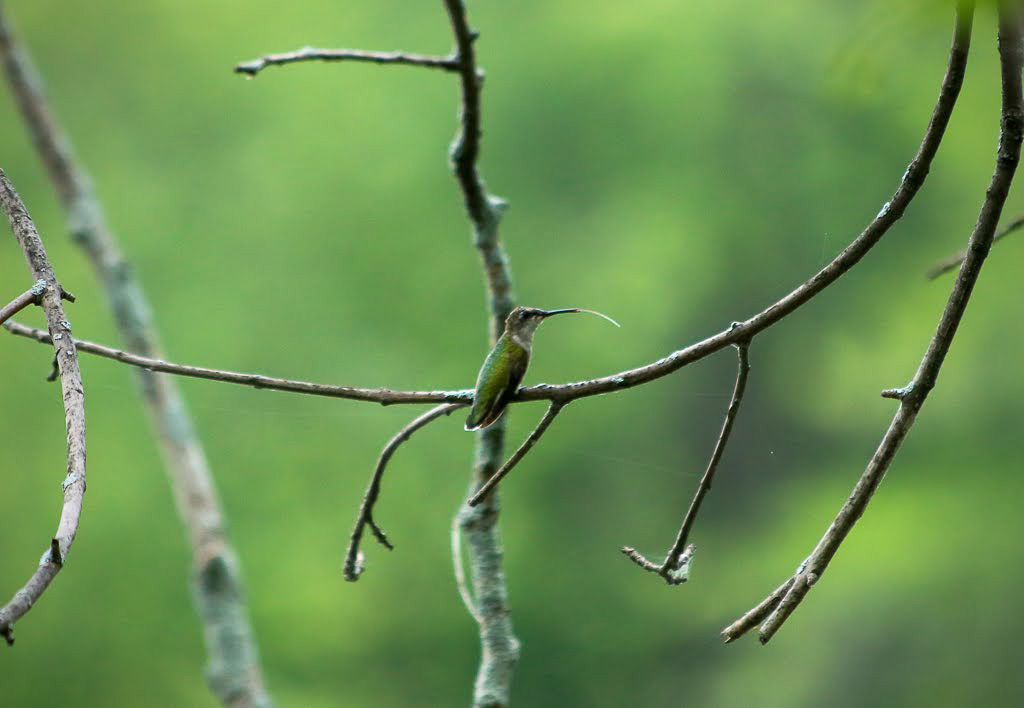 A hummingbird’s tongue is as long as its bill. It dips its long tongue into nectar; flaps on the tongue capture the nectar. With such short legs, ruby-throated hummingbirds cannot walk or hop along the ground, but can shuffle along a perch. (Photo: Brian Rusnica)

In spring, ruby-throated hummingbirds fly across the Gulf of Mexico (an overwater route of 500 to 600 miles) to arrive in Florida. This flight takes about 20 hours nonstop, at speeds of 25 to 50 mph. To prepare for this arduous journey, hummingbirds accumulate fat before the migration begins. Hummingbirds normally maintain about 21 percent body fat, but in preparation for migration, can double their body weight.

Male hummingbirds arrive in our region first, in early May. They scout out a good territory with plenty of nectar-producing flowers. Males have metallic green feathers, a ruby-red throat (hence the name) and a forked tail. During breeding season, males eat small meals about every 15 to 20 minutes. They use the rest of their energy to court females and chase away other males. Before nightfall, they drink enough nectar to last the night. If they are unable to consume enough nectar, they enter a state of torpor. 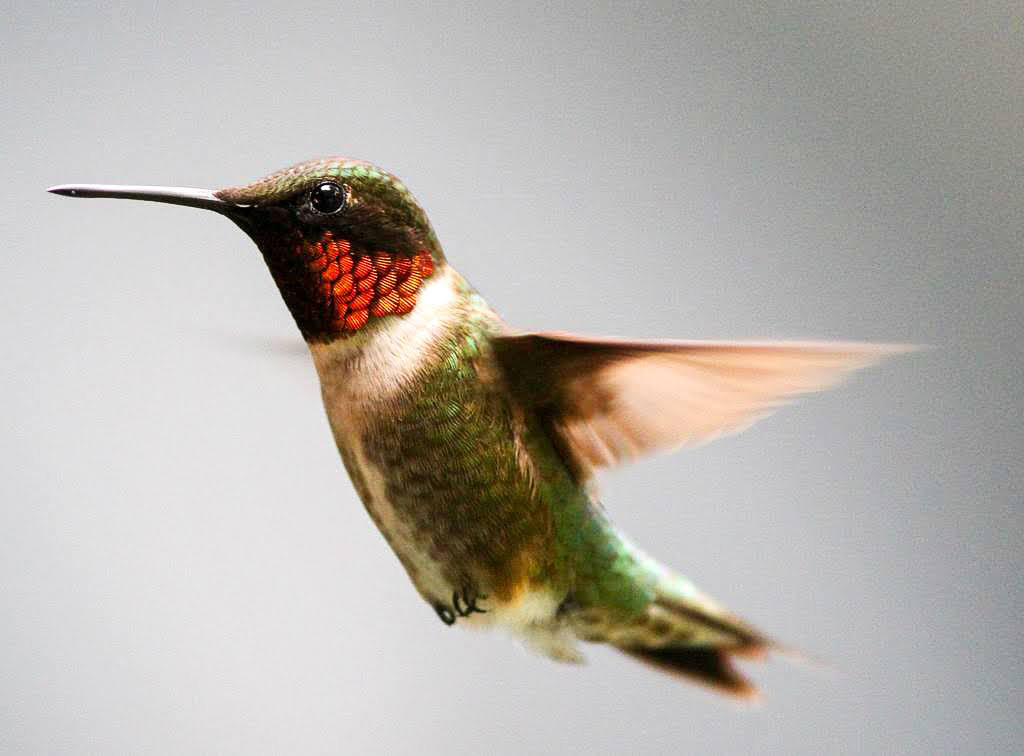 Hummingbirds typically live three to five years, an usually long lifespan for a critter with such a rapid metabolism. (Photo: Sean Werle)

Females arrive in the second half of May. They, like the males, have metallic green feathers, but they have a white throat rather than red. The males work to attract the arriving females. They fly in zigzag patterns, sing, show off their feathers and flap their wings to produce loud humming sounds. The female takes the male’s displays into account but also considers how much food is available, as a mother hummingbird has to feed not only herself but also her chicks. Mating takes about three to five seconds, and then the male hummingbird deserts the female, leaving her to raise the young alone.

The female builds a nest about the size of a golf ball out of buds and lichen held together with spider silk. The silk allows the nest to expand as the baby birds grown. She lines the nest with soft material such as dandelion or thistle fuzz, then lays two eggs, each about the size of a pea (which are quite large considering the size of the hummingbird). The chicks hatch in about two weeks. The female feeds the chicks by inserting her bill into an open mouth and regurgitating food, often while hovering over the nest. When the chicks are 3 weeks old, the youngsters make their first flight and leave the nest for good, although the mother may continue feeding them. 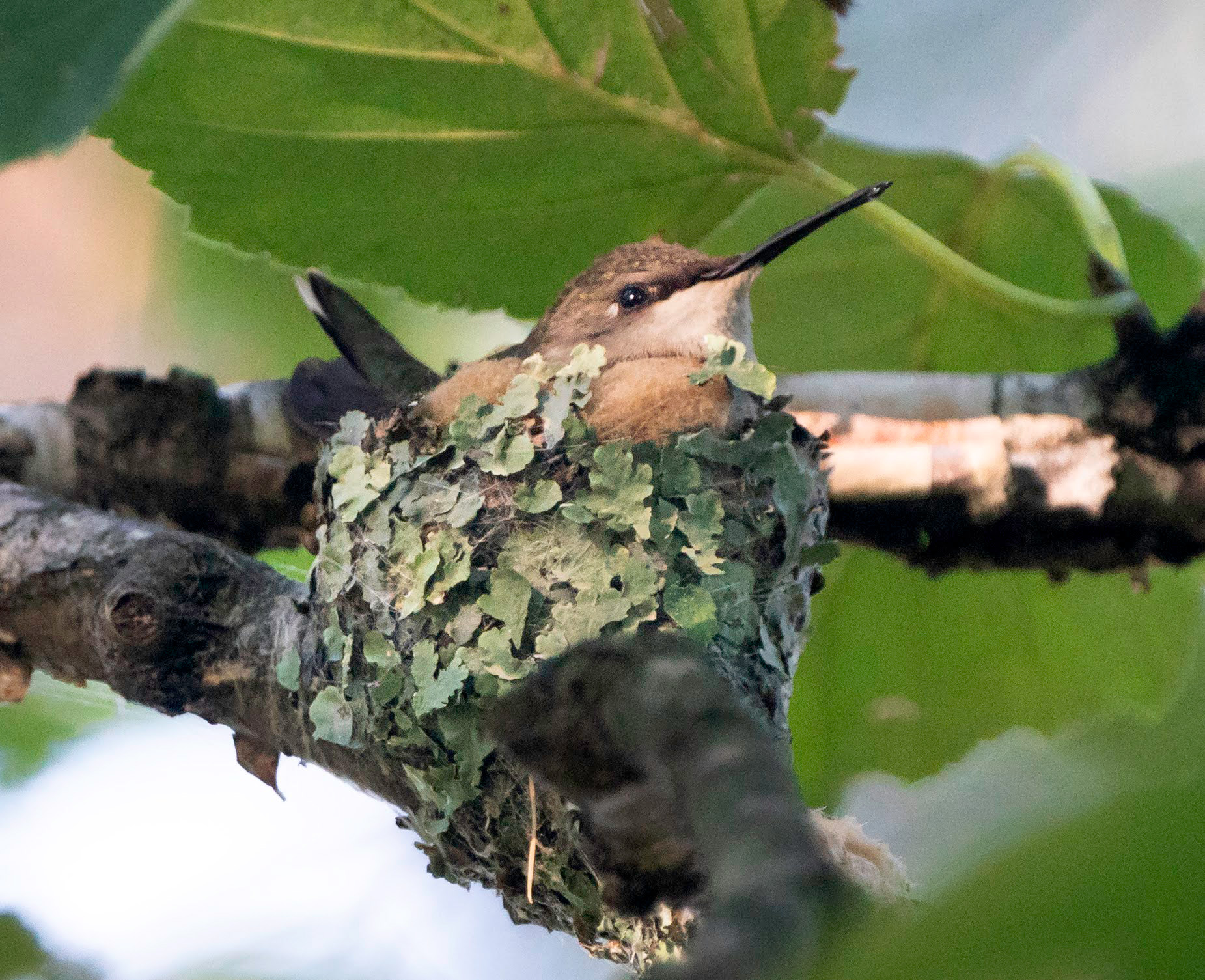 Ruby-throated hummingbirds normally nest on a tree branch, but have been known to nest on chains, wires or even extension cords. (Photo: Lorie Shaull via Wikimedia Commons)

Ruby-throated hummingbirds are only 3 to 3½ inches in length and weigh one-tenth of an ounce (a little more than a penny). They are specialized for feeding on flower nectar, but also eat insects and spiders. A hummingbird typically visits 1,000 to 2,000 flowers per day. To attract hummingbirds to your yard, plant bee balm (Monarda), native honeysuckle (Lonicera sempivirens), pink turtlehead (Chelone lyonii) or other tubular flowers. You can also put out sugary water in a red feeder. Clean the feeder every few days.

Hummingbirds, as you might imagine, have one of the highest metabolic rates of any animal. They breathe 250 times per minute, even at rest. Their hearts pump up to 1,000 times per minute. During flight, a hummingbird’s oxygen consumption is about 10 times higher than that of an elite human athlete. Hummingbirds usually live off their fat reserves at night, but if the reserves are low or they need them for migration, they can enter a state of torpor, slowing their metabolism to a tenth of its normal rate.

To track the ruby-throated hummingbird spring migration into our region, examine this map. 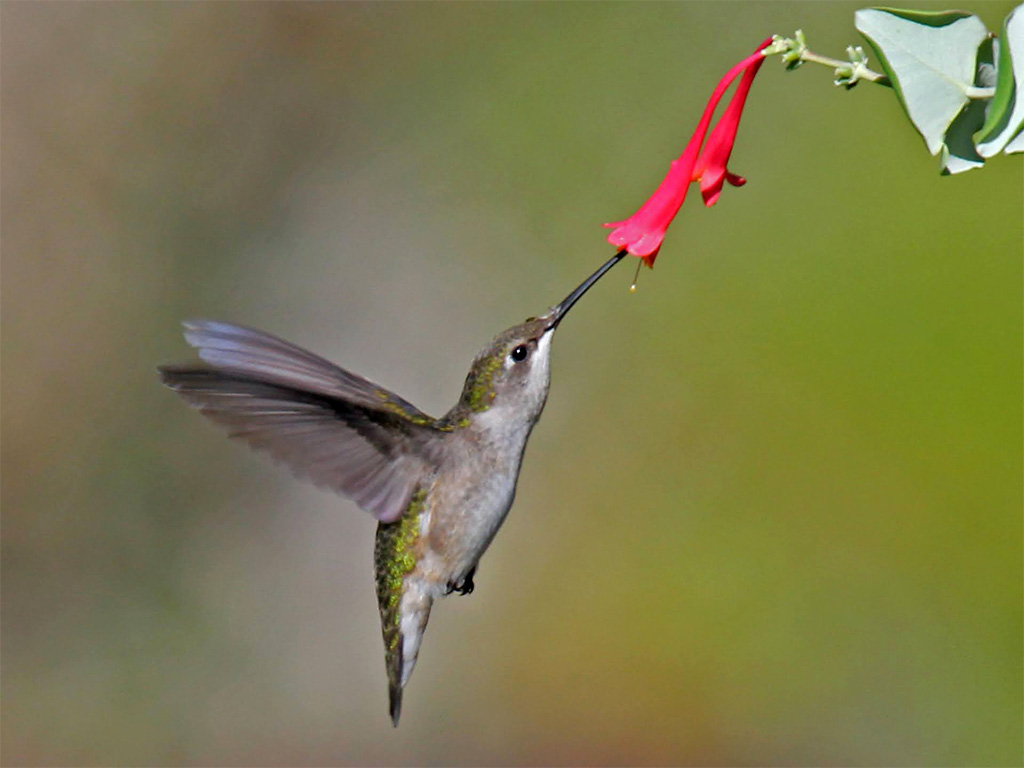