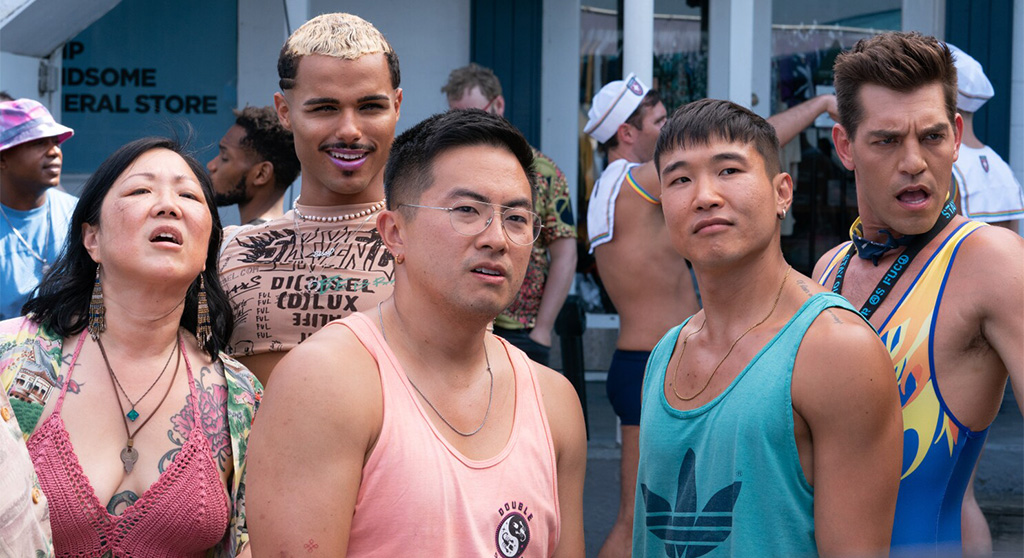 Director Andrew Ahn has been on the cusp of a major breakout for years with his debut “Spa Night” (2016), about a closeted Korean teen, and with the spectacular “Driveways” (2019), one of actor Brian Dennehy’s final roles. In “Fire Island,” a riff of Jane Austen’s “Pride & Prejudice” written by and starring Joel Kim Booster, Ahn has likely found that moment in a bitingly hilarious yet earnestly warm approach to modern romance.

It follows a group of queer best friends on an annual weeklong trip to Fire Island Pines rocked by a change to their rented home away from home: It will be put up for sale at the end of the season by den mom Erin (Margaret Cho). Meanwhile, they’re reminded that the culture primarily favors affluent, white and athletic body types.

The film has its own Mr. Darcy in Conrad Ricamora’s Will, but the drama is less on will-they-won’t-they (though the chemistry between Booster and Ricamora is heavy) and more about the push and pull that develops between best friends with different approaches to love and romance. Noah (Booster) and Howie (Bowen Yang) are the close friends; Noah, who is more into flings and one night stands, wants to convince the more buttoned-up and reserved Howie of his ways.

The charged attraction between Noah and Will makes for a dynamic and heartfelt comedy, but the story highlights platonic relationships as much as romantic or sexual ones, making sure the emphasis is on those who stand by you when heartache sets in. It’s acutely aware that found families – especially in queer circles – are as integral as any sweeping romance.

The characters are never too far from reality to stop them from being relatable. Ahn’s honed direction and eye for natural beauty (rain-soaked skin and magic-hour cinematography) and Booster’s introspective, charming screenplay combine for something fresh despite the tropes. In fact, they enrich those tropes, as do charismatic performances by an all-star cast of up-and-comers and familiar favorites that erases any doubts from the movie’s initial heavily reliance on voiceover. Booster exudes a natural charm and easy-going sincerity as a leading man, while Ricamora is something of a revelation as a brooding yet caring lead allowed equal time to show off his comic abilities.

Despite having established himself as a major comedic talent on “Saturday Night Live,” Yang manages to surprise too. While his natural penchant for physical comedy and off-the-cuff dry delivery is still present, it’s his empathetic warmth that makes him such a captivating character this time around. In a standout scene in a dining hall bathed in fluorescent lighting, Howie delivers a bare yet sweet karaoke performance of Britney Spears’ “Sometimes.” It’s a sequence expressing the strongest elements of the film, going beyond the Austen homages by modernizing them.

Drenched in sunlight, with a quick, breezy pace that keeps the plot engaging and moving, and tangible camaraderie between its main cast, “Fire Island” proves to be a breath of fresh air in a genre looking to reinvigorate itself. Both a reminder of the profound emotional pull of a well-executed romantic comedy and a semi-introduction (on a greater scale) to some under-the-radar talents, Ahn and Booster together have created the perfect film for summer days, as well as a modern rom-com classic.