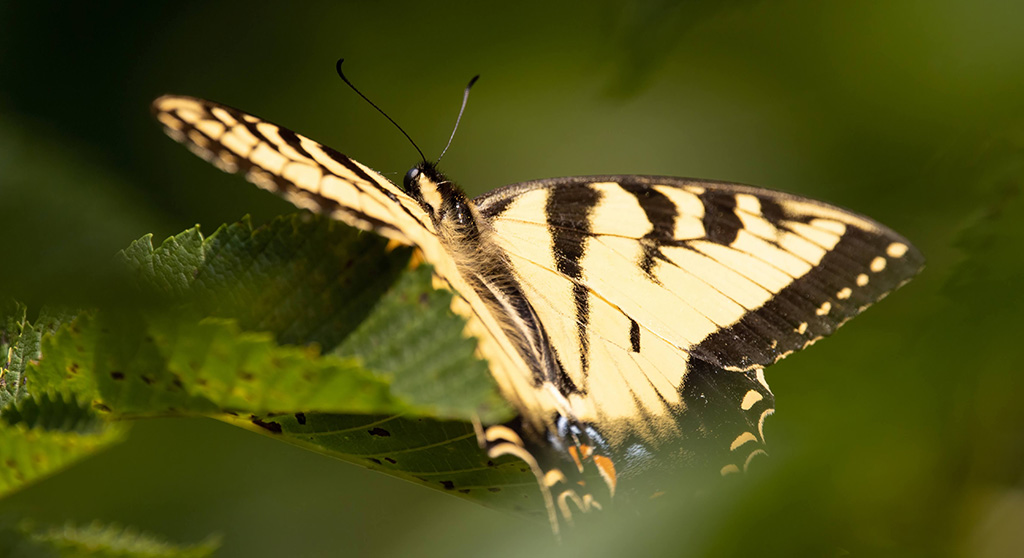 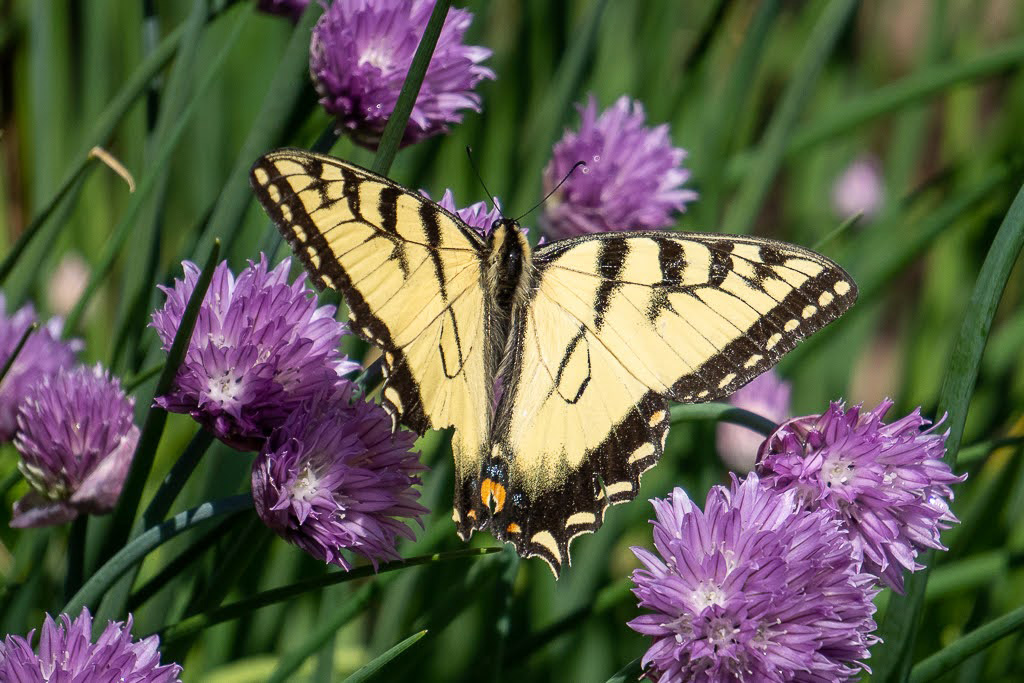 Eastern tiger swallowtail butterflies emerge from their chrysalises/cocoons as adults in May and June; if you are lucky, you might see one now. These adults live for only about 12 days, so look quickly. (If you miss them now, a second brood emerges in late July and August.)

John White, an explorer, artist and mapmaker, drew the first illustration of a North American butterfly – a watercolor sketch of an eastern tiger swallowtail – that is now displayed in the British Museum. White sailed to Roanoke Island, near the Outer Banks of North Carolina, in July 1587 to help establish and govern the first permanent British settlement in the Americas. White’s pregnant daughter and son-in-law were part of this expedition, too. White’s granddaughter, Virginia Dare, was born Aug. 18 of that year, the first English baby born in the Americas. Ten days later, White returned to England to gather supplies for the colony. Because England needed ships to fight the Spanish Armada, White was unable to return until three years later. When he returned, on his granddaughter’s third birthday, he found that the colony was gone. No one knows for certain what happened to Virginia Dare or the other 117 colonists of Roanoke. 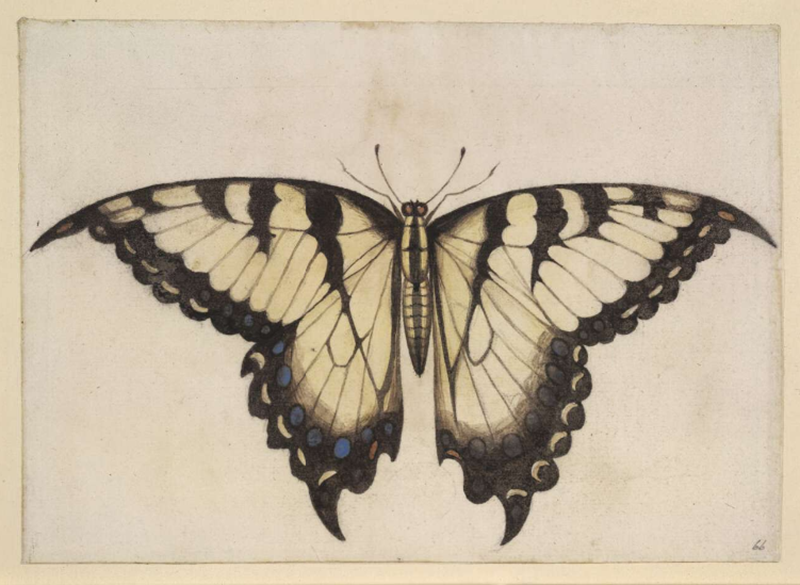 John White’s 1587 watercolor-over-graphite illustration of a swallow-tail butterfly. (Image: The Trustees of the British Museum)

There was no sign of a struggle at Roanoke. A colonist had carved the word CROATOAN into a post. All of the houses had been dismantled, suggesting the colonists moved intentionally, perhaps to Croatoan Island (today known as Hatteras Island). Before White could go looking for the colonists, a hurricane damaged his ships, and he had to return to England for repairs. Although he tried, he was not able to secure funding to make a return trip to the Americas.

Many historians think the Roanoke colonists split into two groups. The larger group went to the Chesapeake Bay area, their original intended destination. The other group stayed behind to wait for White, but moved eventually to Croatoan, the main village of the Croatoan (or Hatteras) Indians. There the colonists may have assimilated into Croatoan life. The Jamestown colony later sent out search parties looking for the Roanoke colony, but these searches were not successful. 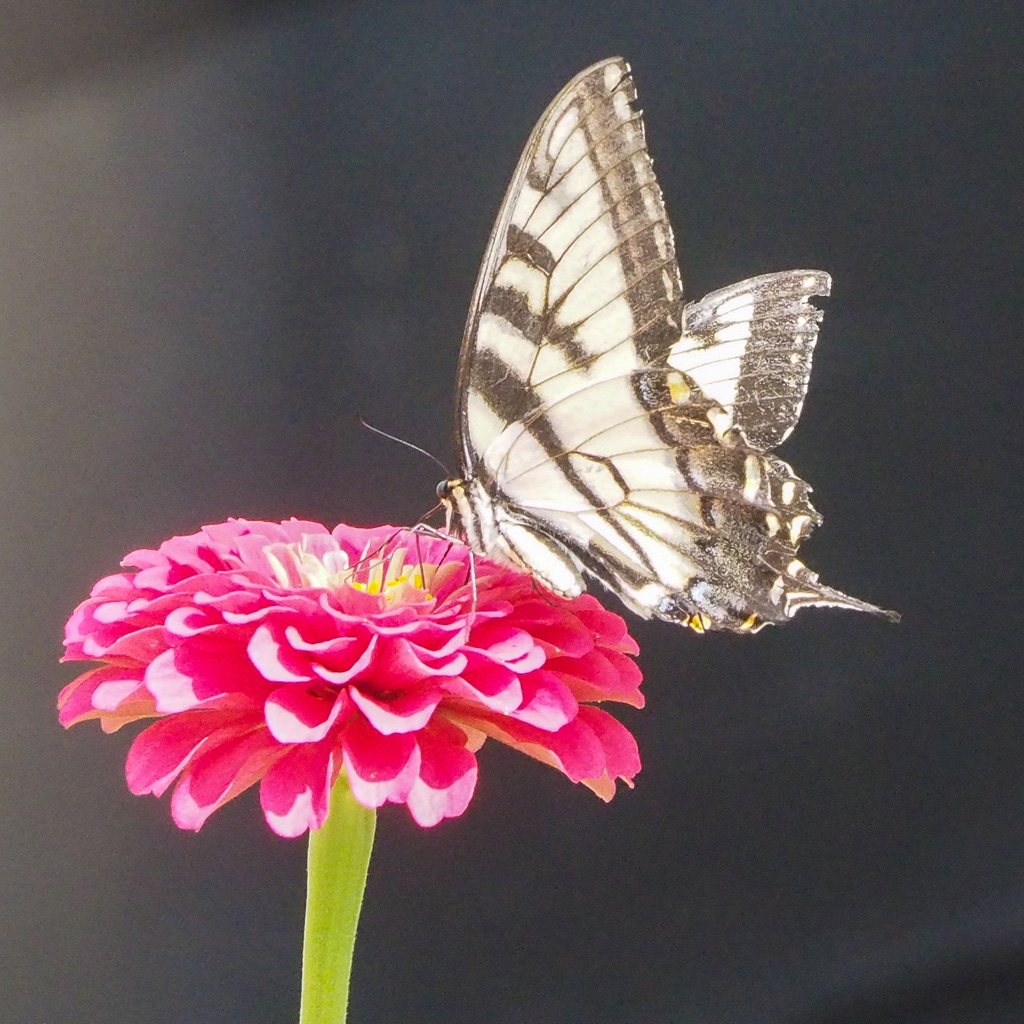 As White’s watercolor indicated, adult tiger swallowtails are very large yellow-and-black butterflies. The length from wingtip to wingtip can be as great as 5½ inches! The adult female lays up to 250 single large green eggs on magnolias, tulip trees or black cherry trees. The caterpillars that hatch from the eggs in four to 10 days are well camouflaged. At first the smallest caterpillars are brown and white and look like bird droppings. The caterpillars molt four times as they grow larger and larger during the next three to four weeks. The larger caterpillars are bright green with two eyespots behind their real eyes, which makes them look much like a snake’s head. If a predator touches or pecks at this caterpillar, it extends a snakelike, forked and foul-smelling appendage on its head called an osmeterium. It wipes a stinky acid on the predator to scare it away. 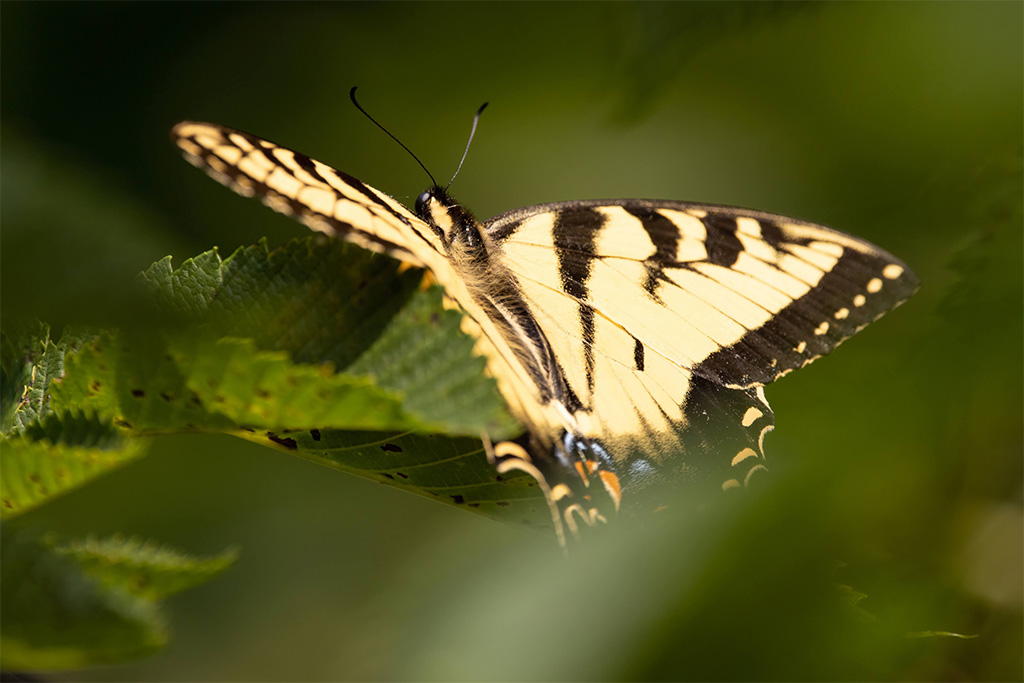 The outer edge of the tiger swallowtail’s forewing is black with a row of yellow spots. (Photo: Richard George)

The caterpillars that hatch in early summer grow and grow until they transform themselves eventually into green chrysalises on green leaves. Adult butterflies emerge from these chrysalises in late summer. These adults lay eggs and new caterpillars hatch. These caterpillars grow and grow until, triggered by shortening daylight, they transform into brown chrysalises among fallen brown leaves. Inside each chrysalis, the pupa stops developing and overwinters in the leaves until May or June, when, triggered by increasing day length and warmer temperatures, it emerges as an adult. During the winter, each pupa produces glycerol, which prevents it from freezing in cold temperatures.

Unlike monarch butterflies that migrate, tiger swallowtails (and most other butterflies and moths) overwinter on the ground in leaf litter. Tiger swallowtails, always experts at camouflage, disguise their chrysalises as dried leaves and blend in with the real ones. 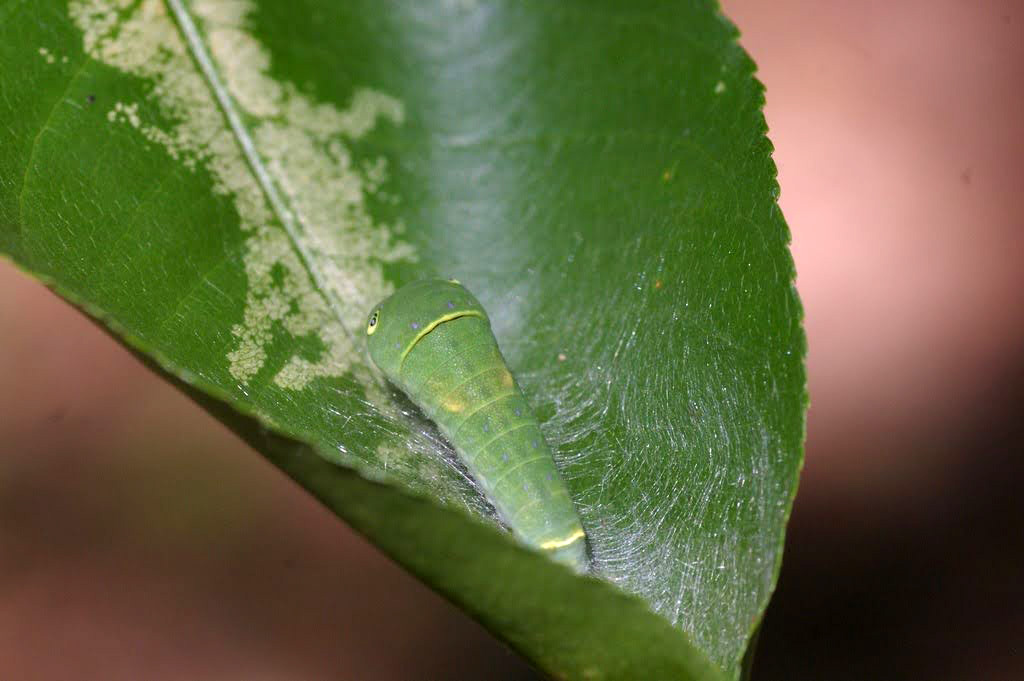 Bumblebees, too, overwinter in the ground or in leaf litter. For this reason, it is beneficial to leave as many leaves as possible in your yard over the winter. Fallen leaves suppress weeds, help the soil retain water and insulate your garden plants from the cold – and if you remove them, you remove the butterflies and moths in them. Dispose of fallen leaves, if necessary, late in the spring, because the longer you can wait, the better it is for our butterflies and bees. Instead of using mulch in your yard, use leaves! 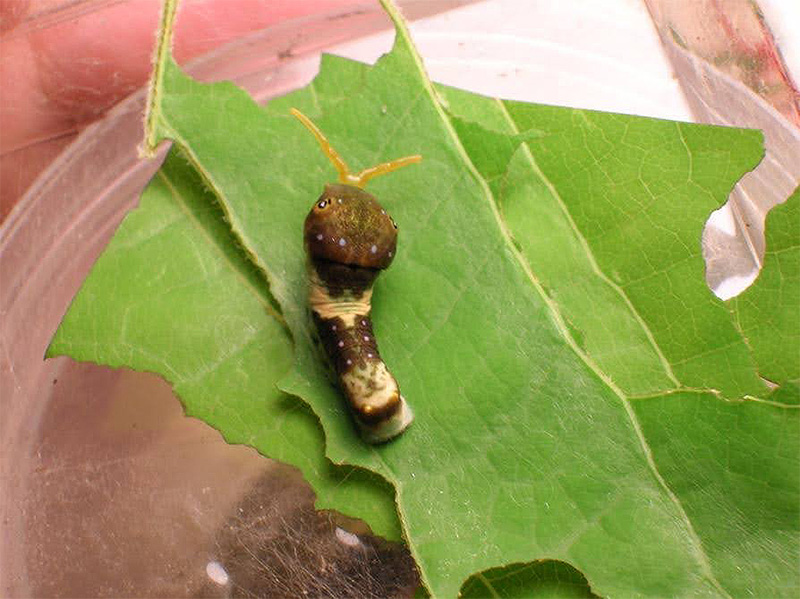 A tiger swallowtail caterpillar extends it osmeterium, a forked appendage on its head. (Photo: TheAlphaWolf via Wikimedia Commons) 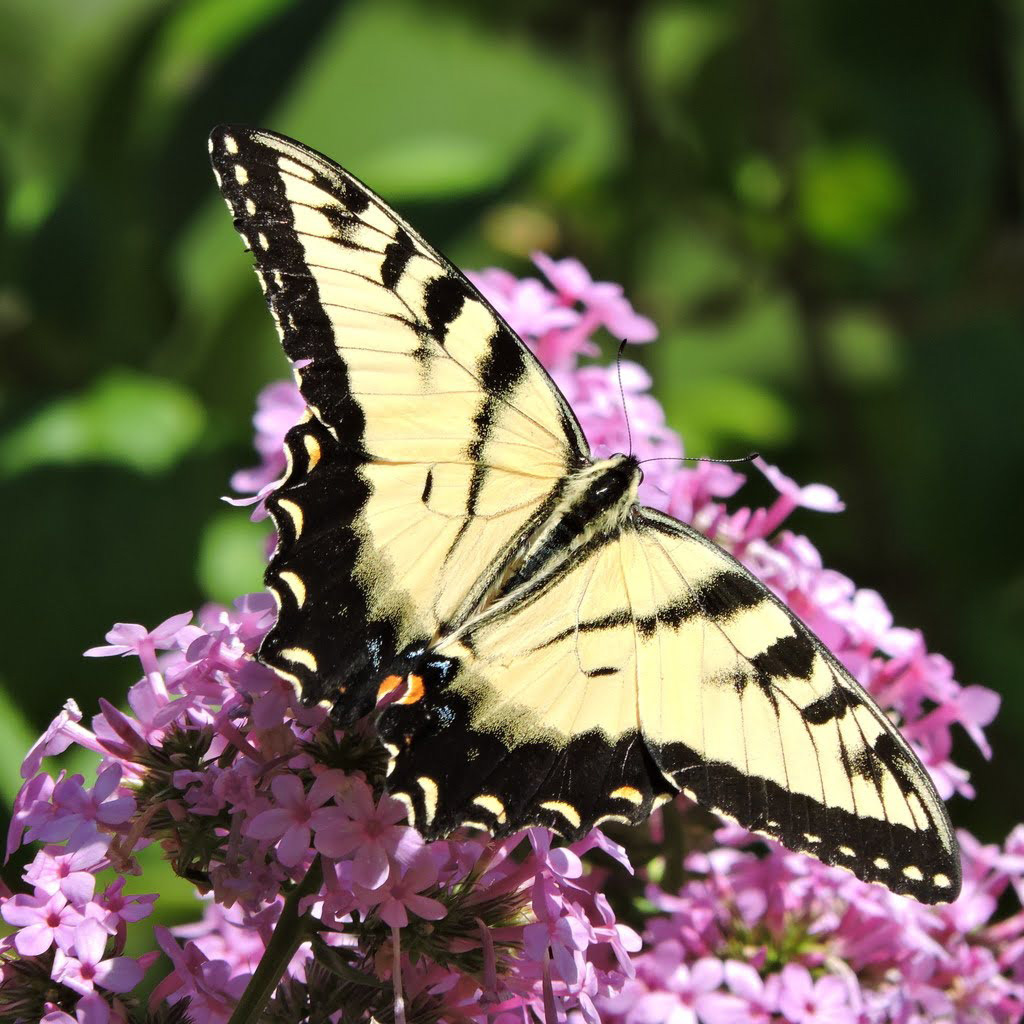 Tiger swallowtails are usually solitary butterflies, but sometimes many males come together in muddy or wet areas and drink the water. They are taking in salts and amino acids from animal dung or urine. These males are usually only a day or two old and need these salts to help with reproduction.

The tiger swallowtail butterfly is widespread and common in Massachusetts, with a stable population because it is a generalist species with host trees in more than one family. 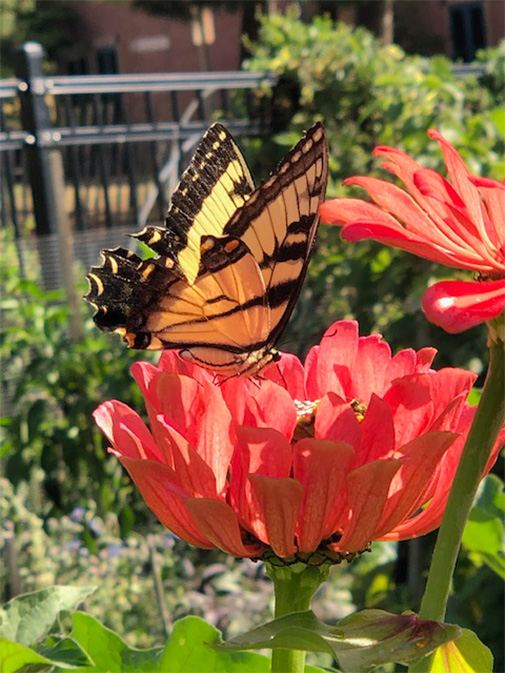