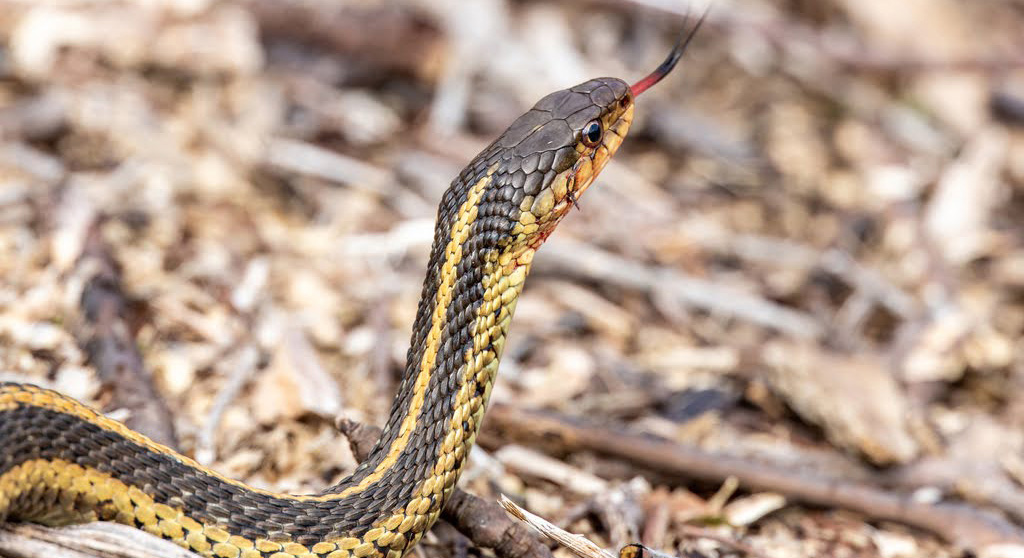 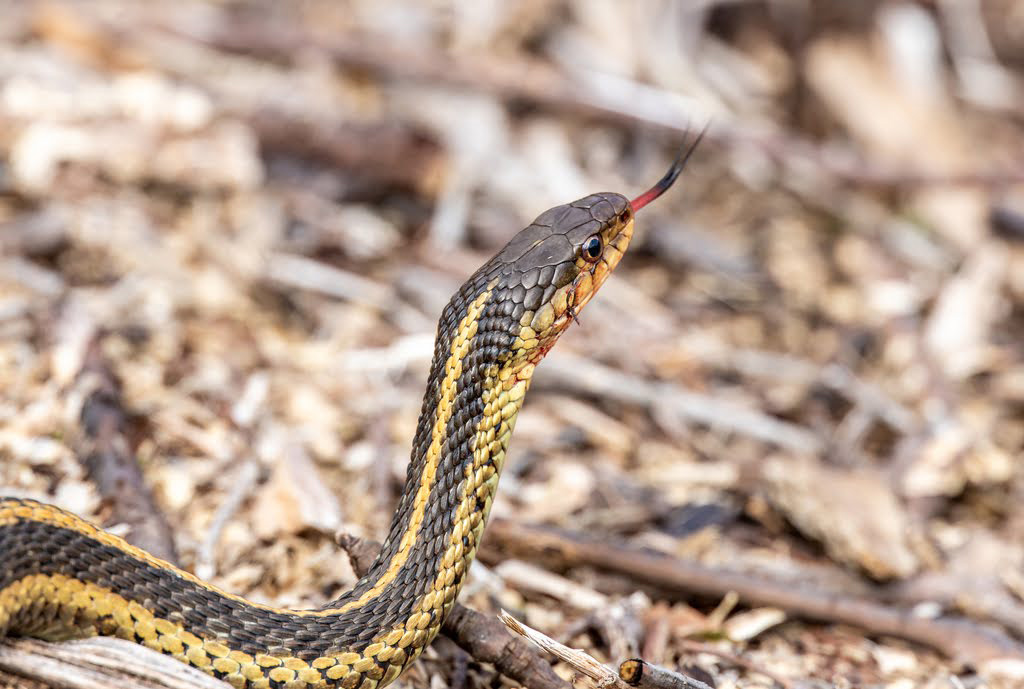 The state reptile of Massachusetts is the harmless garter snake, an easy one to distinguish because of three yellowish stripes that run the length of a dark body usually less than 3 feet long. (Once in a while, one appears more checked than striped.)

Eastern garter snakes emerge from their overwintering dens in March or April and mate; then males and females go their separate ways. Females can store a male’s sperm for up to two years, so she can fertilize her eggs whenever conditions are good. 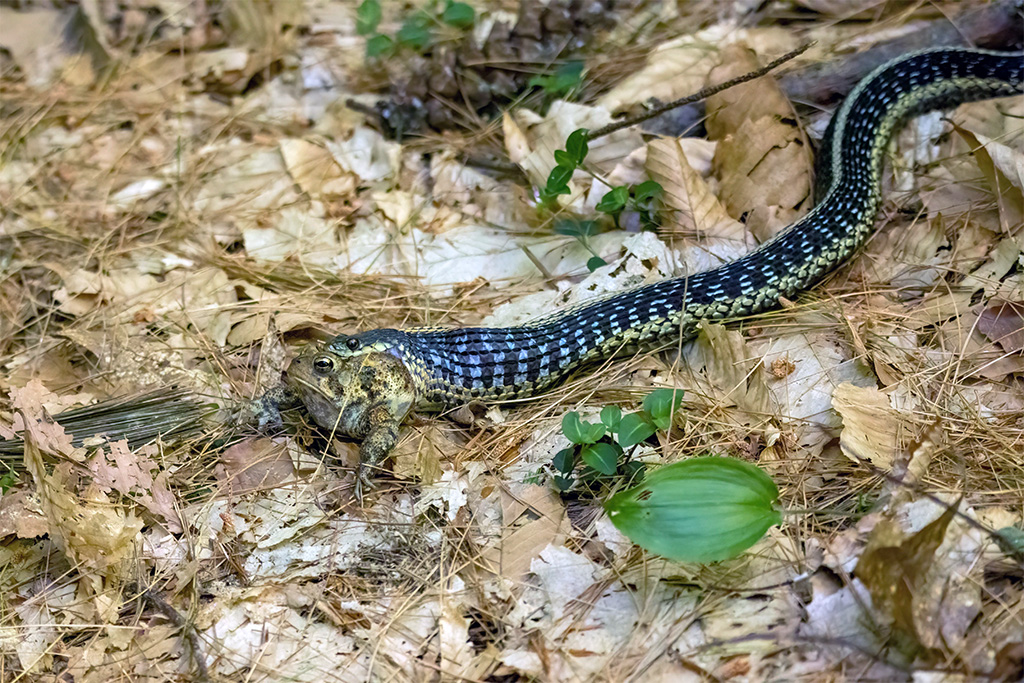 The eastern garter snake, like all snakes, is carnivorous. This one tries to swallow whole a North American toad. (Photo: Richard George)

Although 70 percent of the world’s snakes lay eggs, garters are an exception: Females give birth to up to 50 live young any time from July until October, incubating eggs about halfway down her body for two to three months until they hatch inside as little snakes. Larger females birth larger numbers of baby snakes.

The babies are about 5 inches long and independent as soon as they are born. Most of the young become prey and probably die in their first year, but the ones that survive live for a few years. Garter snakes reach about 2 feet in length after two years. They continue to grow for as long as they live, which is often only a few years in the wild. 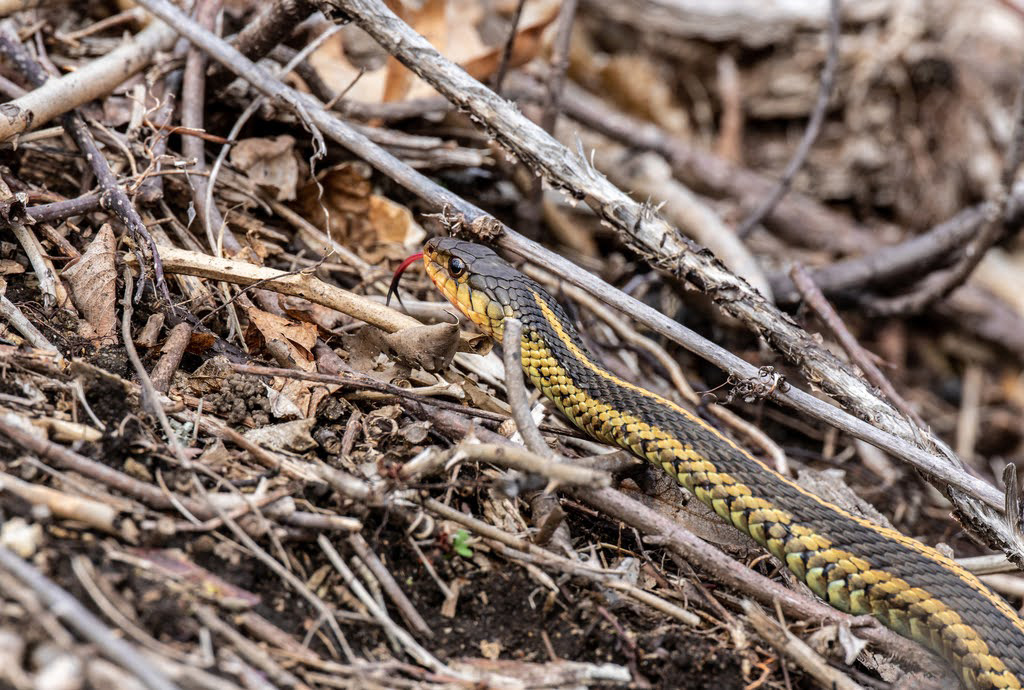 Garter snakes probably get their name from their resemblance to the garters that held up old-fashioned stockings. (Photo: Matt Sabourin/iNaturalist) 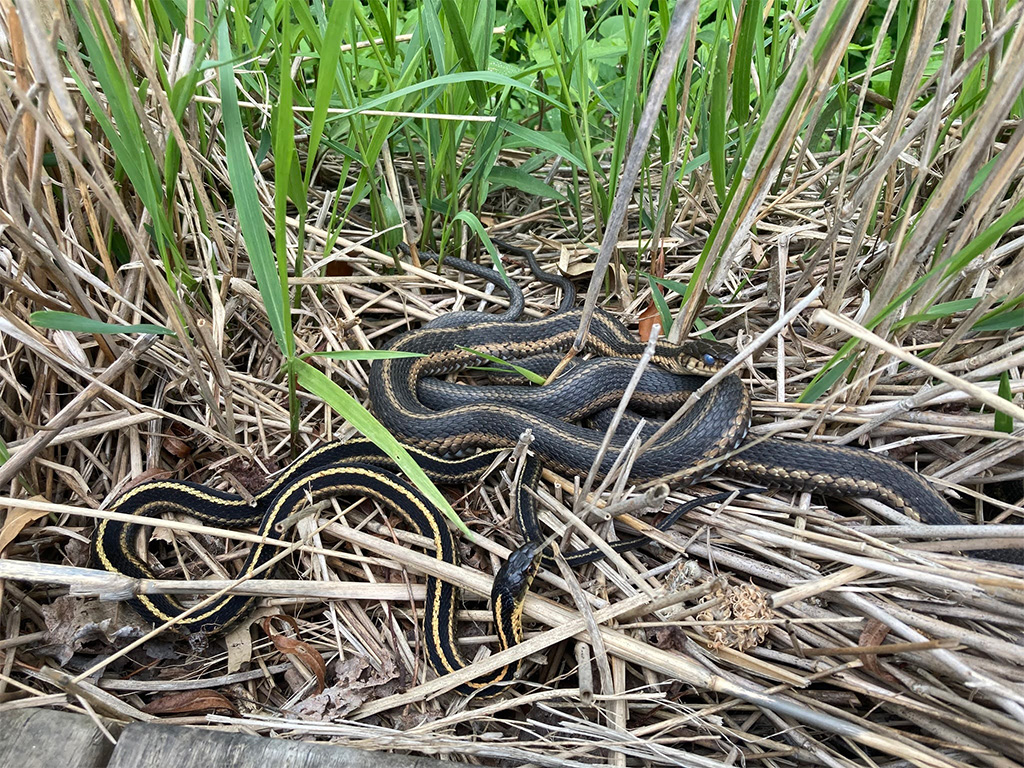 A group of eastern garter snakes in the Alewife Reservation. (Photo: Izzy Eisendrath)

Why do snakes have forked tongues? Aristotle thought it gave them double the taste sensation of humans: “a twofold pleasure from savours, their gustatory sensation being as it were doubled.” Others, such as Shakespeare, perpetuated the myth that snakes can kill you with a flick of their tongue: “Whose double tongue may with a mortal touch/Throw death upon thy sovereign’s enemies.” In the 1600s, the Italian astronomer Giovanni Hodierna thought that a snake’s tongue was for cleaning dirt out of its nose “since they are always groveling on the ground.” Other people thought that the forked tongue worked like a pair of tongs to capture flies or other insects. 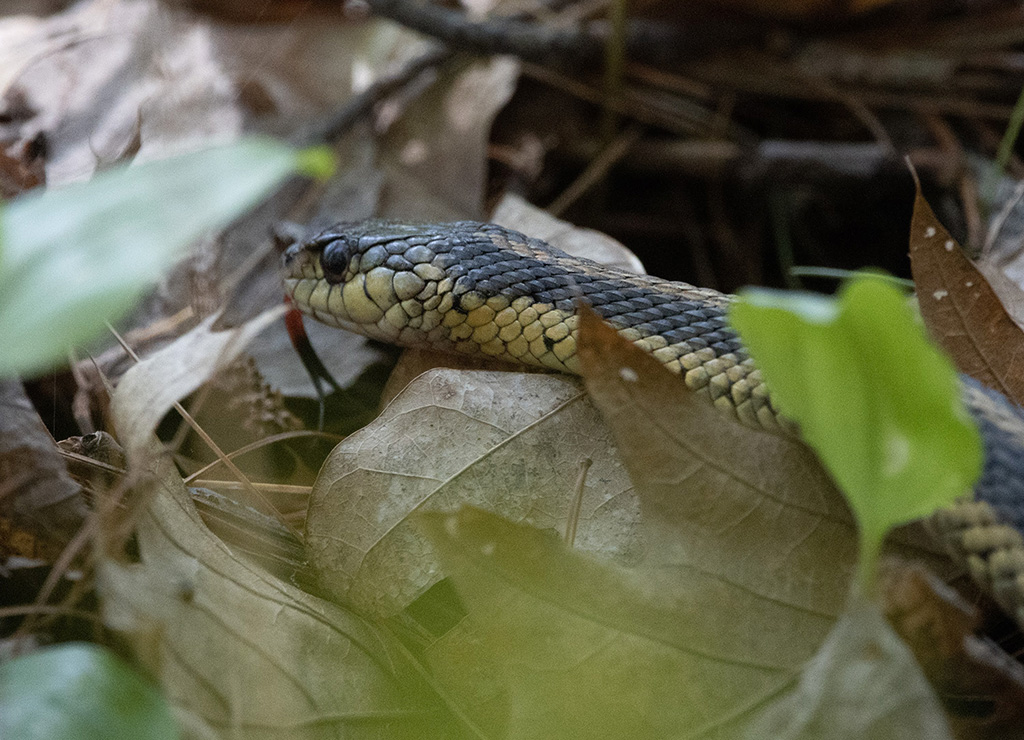 Today we know that garter snakes flick their forked tongues to collect chemicals from the air or ground. Their tongues do not have taste receptors like human tongues. To interpret the chemicals collected on the tongue, they use a special organ (called the Jacobson’s organ) on the roof of their mouths. Garter snakes process this information to follow chemical trails left by prey or pheromone trails left by other garter snakes, distinguishing easily between male and female pheromones.

The forked tongue has another purpose: It helps tell snakes which direction to go. When snakes spread the tips of their tongue apart (and they can spread their tongue wider than their head), it allows them to detect chemical gradients. They follow the strongest chemical trail to find potential mates, for example. In the 1930s, a German scientist removed the forked part of snakes’ tongues. He found that snakes still responded to smells but couldn’t follow scent trails. 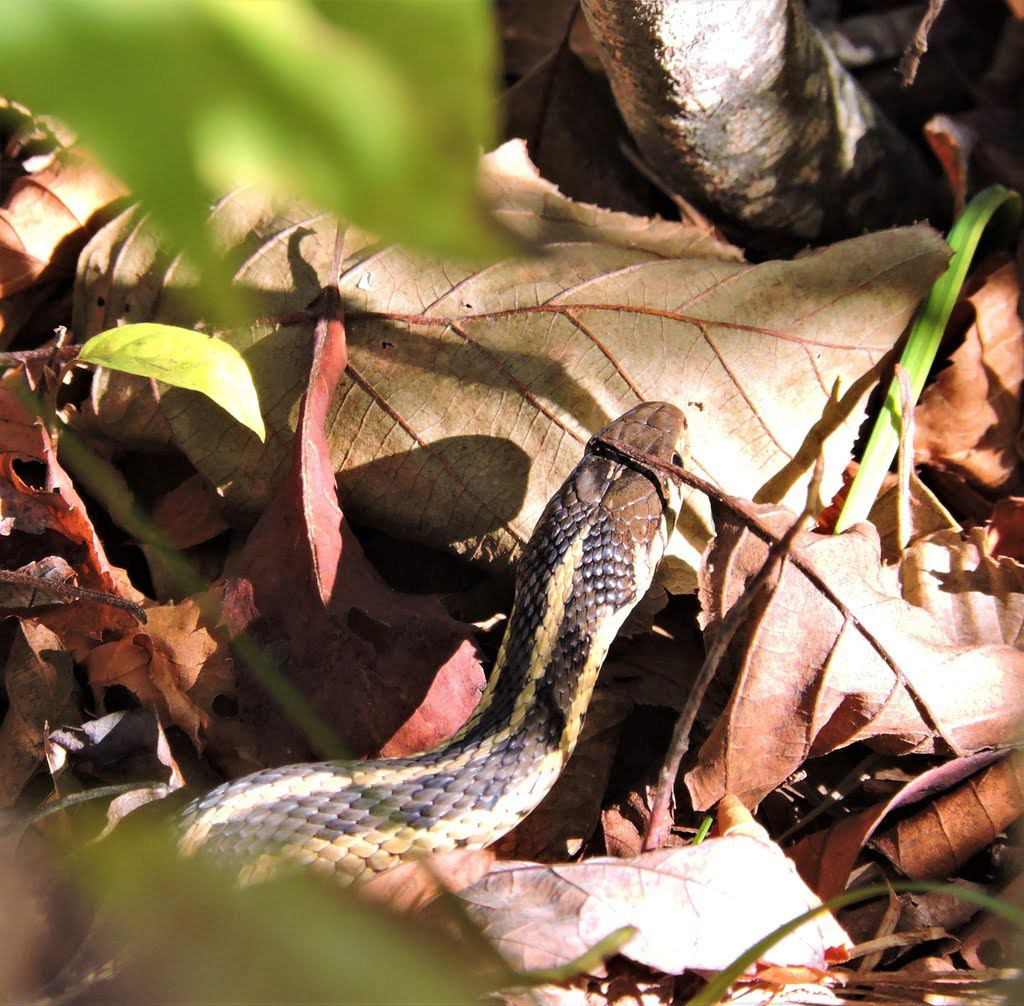 The snakes’ stripes make them difficult to see or capture. (Photo: Ann Schlesinger)

Garter snakes are cold-blooded, so they regulate temperature by lying in the sun to warm up or sheltering underground in abandoned mammal burrows or under rocks to cool down. These snakes brumate in large groups from late October until March or April. (Hibernating animals sleep; brumating animals are awake but inactive.) Lying together in tight coils allows the snakes to minimize heat loss and stay warmer. Garter snakes do not eat during this time, because their body temperatures are too low to digest food. Their metabolism slows so much that they use very little energy. They absorb moisture through their skin to stay hydrated. 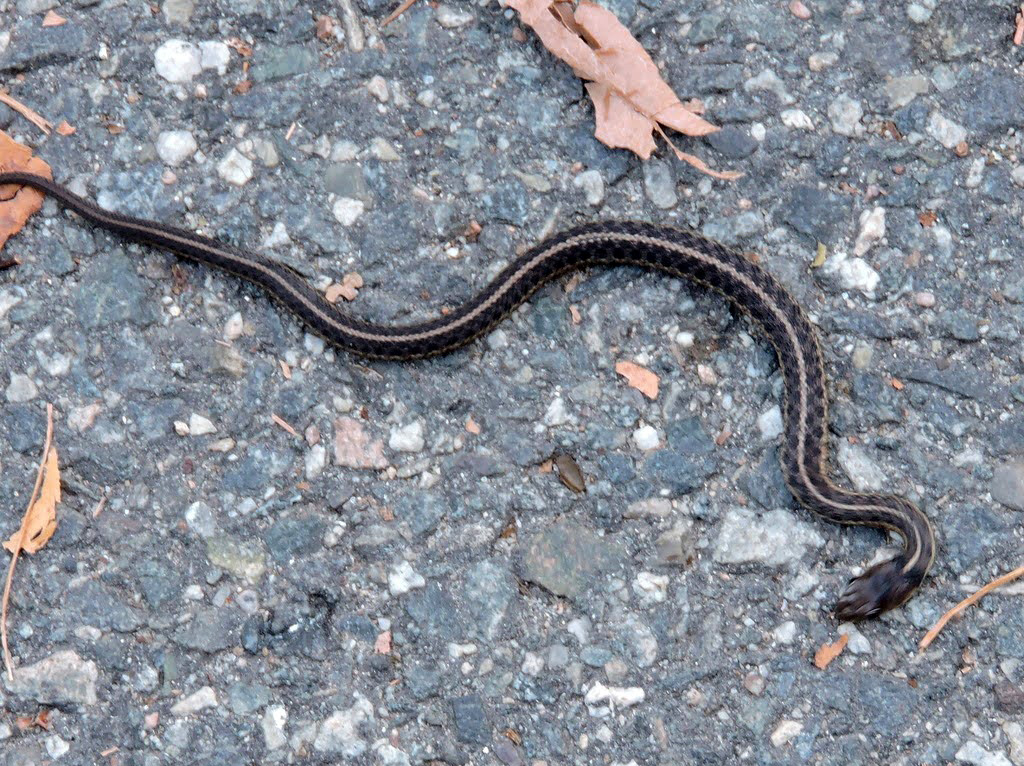 An eastern garter snake suns itself in North Cambridge. Garter snakes try to maintain a body temperature of 82 to 90 degrees Fahrenheit throughout the day. (Photo: Ann Schlesinger)

Garter snakes eat slugs, leeches, lizards, frogs, minnows, rodents, fish, small mammals, worms and insects. They live in many habitats but are often near water because amphibians make up a great deal of their diet. Garter snake populations have declined because of pesticide use, habitat destruction, the collection of snakes for the pet trade and water pollution. Despite this, they are still one of the most common reptiles in much of their range and a welcome sight to many gardeners, who know the snakes will help control garden pests.

[The garter snake] is so harmless to man, that … if he were not a snake, we should call him beautiful in his stripes of black and gold, and in graceful motion – a motion that charms us in the undulation of waves … 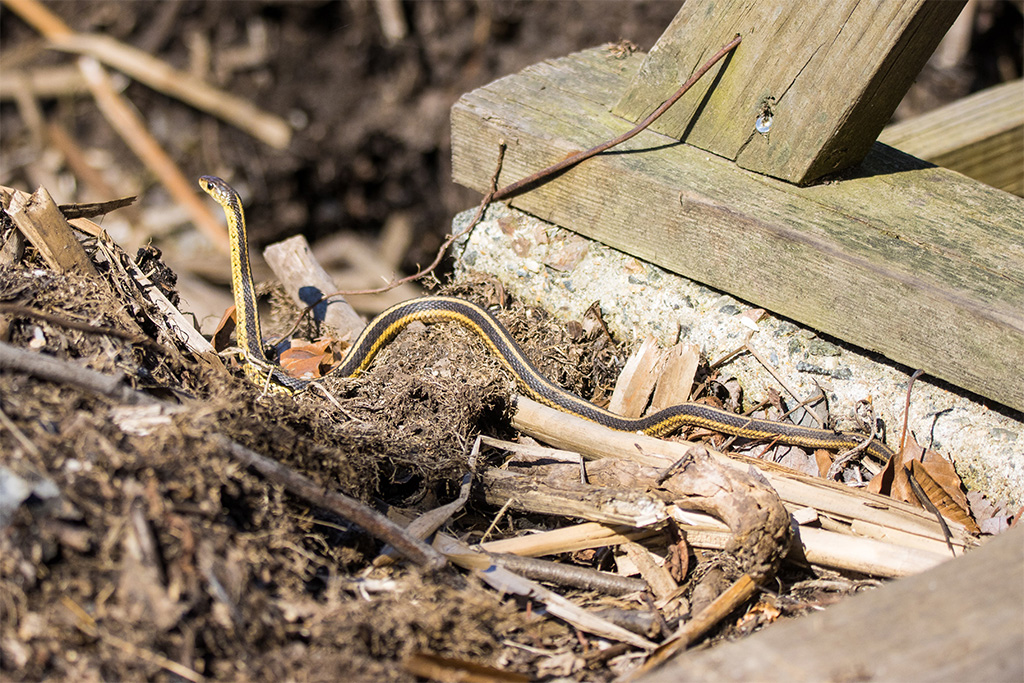 This garter snake, photographed in March 2021, had recently emerged from its overwintering den. (Photo: Richard George)