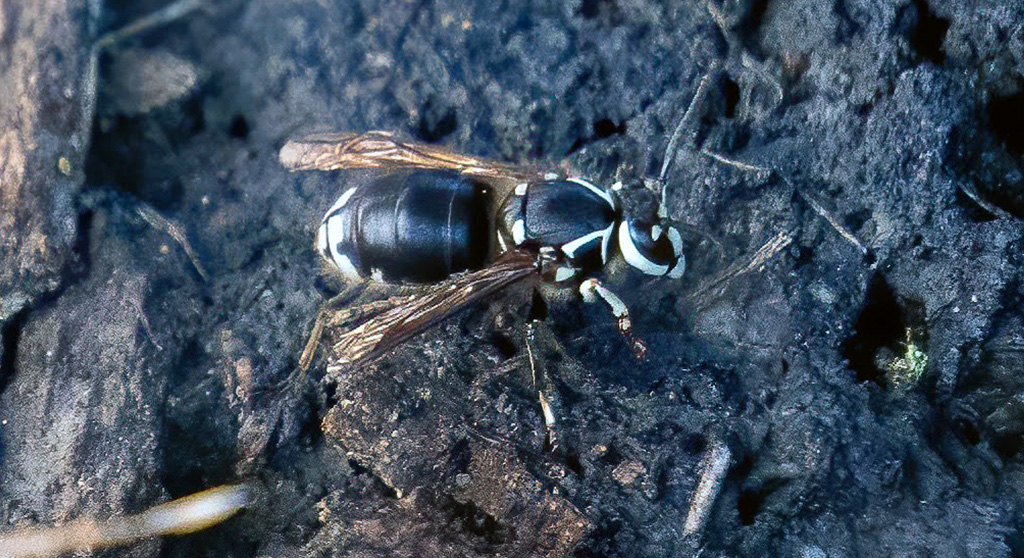 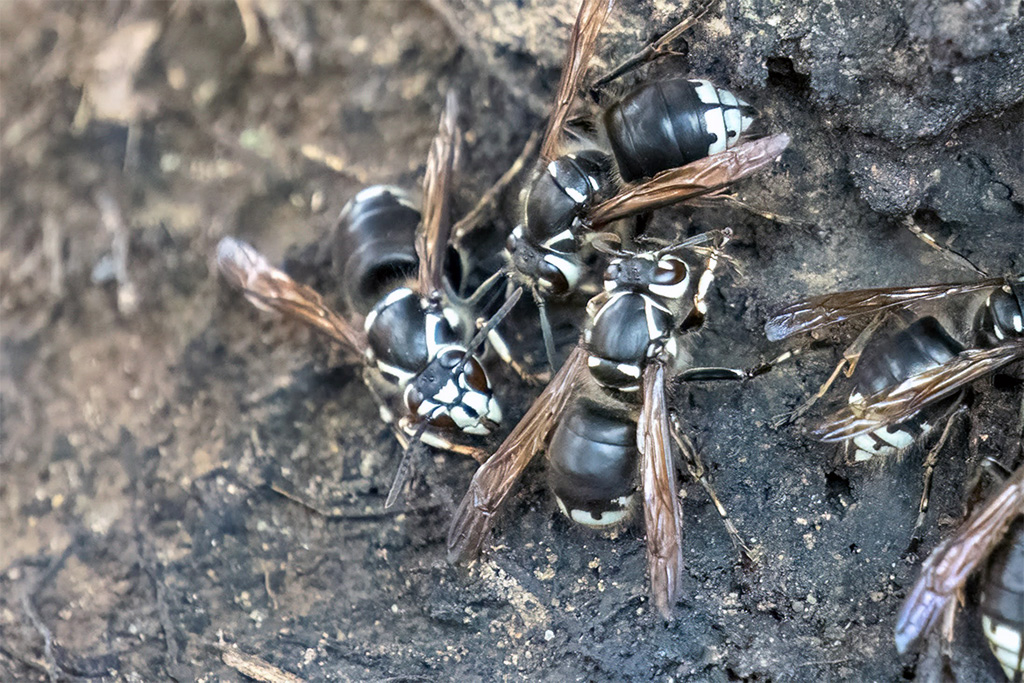 Bald-faced hornets feed on nectar and tree sap and fruit pulp – they especially like fallen apples – as well as insects. (Photo: Jeanine Farley)

Last week as I was walking my dog, she stopped to sniff beneath an oak. Suddenly she jumped back. I looked more closely at the trunk and discovered dozens of bald-faced hornets (Dolichiovespula maculata) in a wet, sappy area at the base of the tree. Yikes! We moved away and continued our walk.

Contrary to their name, bald-faced hornets are not hornets at all, but rather yellow jacket wasps. They are sometimes also called bald-faced aerial yellow jackets, but this is a little confusing, I think, as the insects are black and ivory with no yellow at all. The bald-faced hornet gets its name from the ivory markings on its black face. “Bald” comes from the word “piebald” (“pie,” short for “magpie,” and “bald” meaning “spotted white”). So a bald-faced hornet has white face markings similar to those of a magpie. 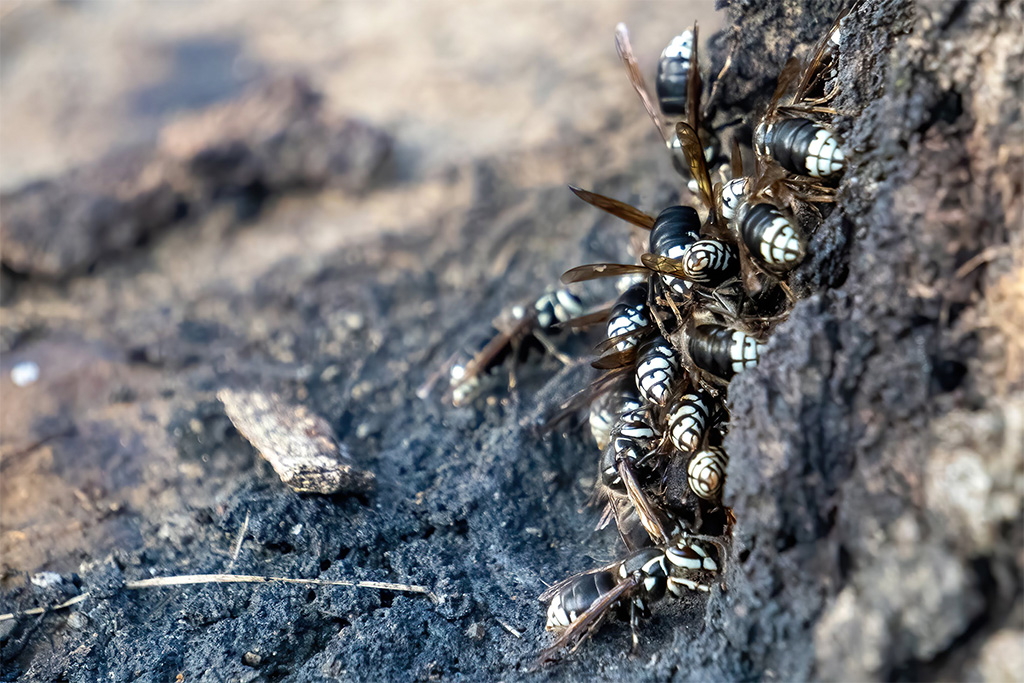 ald-faced hornets have three white stripes on the end of their abdomen. (Photo: Jeanine Farley)

Whatever they are called, these wasps are big (at up to an inch long, the largest members of the wasp family in North America) and scary looking. They have a well-deserved reputation for aggressiveness, though only when protecting their nest. The bald-faced hornets I found at the base of the oak tree showed little interest in me even when I returned with camera in hand and got very close.

In spring, a fertilized queen hornet emerges from overwintering in a stump or rotten log, a rock pile or wood chips, or perhaps even an attic wall. She then chews up the silvery-gray outer layer of weathered or rotting wood, dead plant fibers or cardboard, mixing the fibers with her saliva to make a paste. She spreads this paste around with her mouth and legs. It dries into a papery sheet. 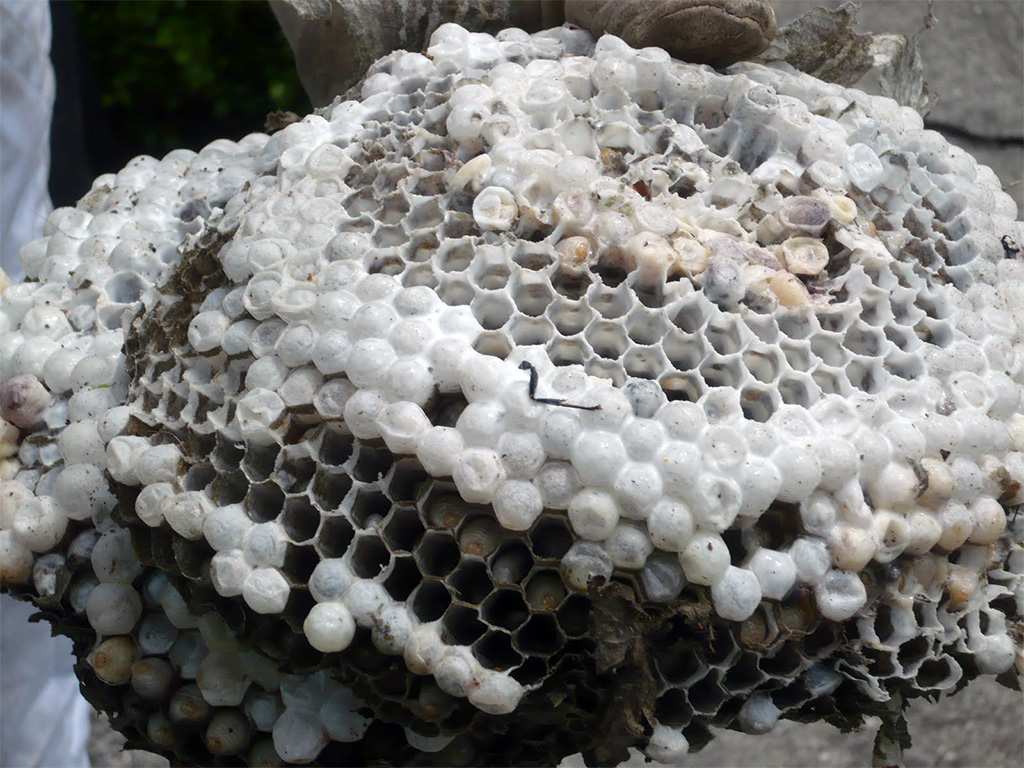 The interior of a hornet’s nest contains brood cells. The queen lays an egg in each cell. The eggs hatch into larvae. (Photo: Ellin Beltz via Wikimedia Commons)

She uses this “paper” to build a nest with a few brood cells into which she lays eggs – one in each cell. When larvae (grubs) hatch after six days, the queen hunts for, stings and paralyzes, then chews up insects to feed them. These first larvae grow rapidly and shed their exoskeleton several times for eight days. Then they transform into pupae. Over the course of 10 days, the pupae metamorphose into adult female workers.

These worker adults start laboring: They add more brood cells to the nest, collect insects to feed new larvae, feed on sap and nectar and defend the nest. Social insects such as these are willing to sacrifice individual members to protect the nest; solitary insects, such as most bees – except honeybees – sting only as a last resort because fighting can lead to the end of their reproductive line. From now on the queen lays eggs only; she retires as a worker. 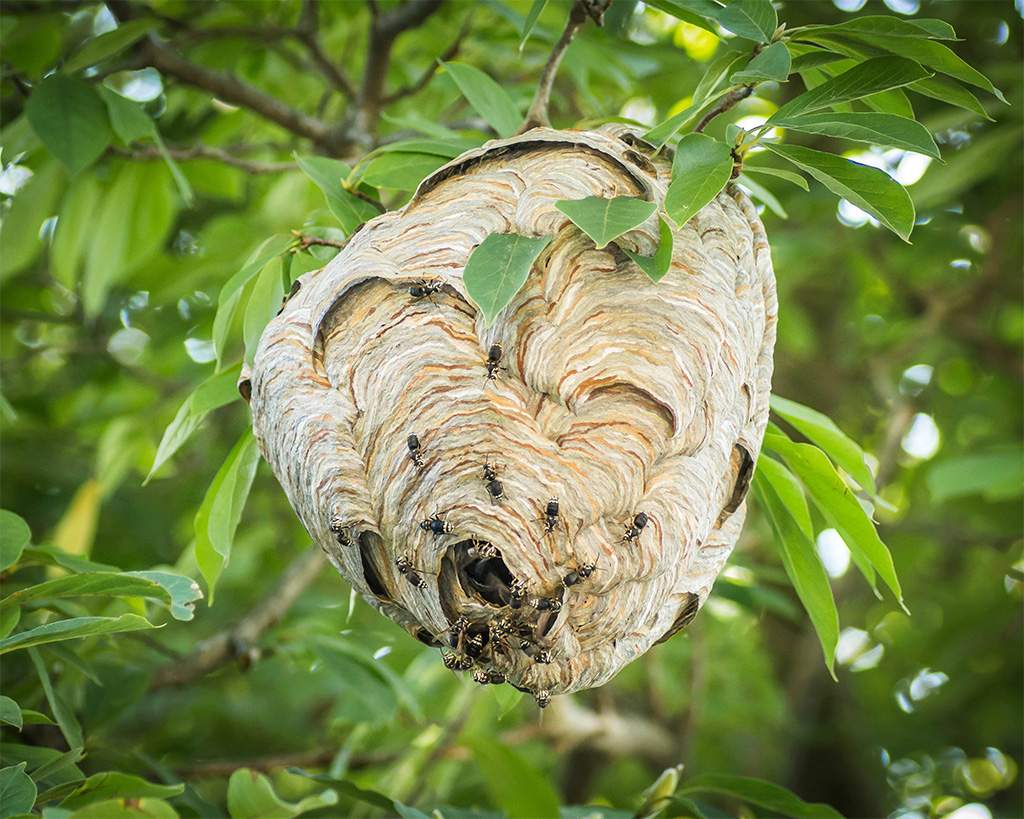 he nests of bald-faced hornets are frequently pear- or egg-shaped. They can reach 14 inches in diameter and more than 23 inches in length. The exit/entrance hole is near the bottom. (Photo: Philip N. Cohen via Wikimedia Commons)

The stinger of the bald-faced hornet is also its ovipositor for laying eggs. Thus, only females sting. People most often encounter female workers, though, so this distinction isn’t enormously helpful. In addition to injecting venom with a stinger, bald-faced hornets can squirt venom from the stinger into the eyes of a predator making the mistake of disturbing the nest. This venom is extremely irritating, makes the eyes water and can cause temporary blindness.

Over the course of the summer, the workers increase in number and the nest grows bigger and bigger as more and more hornets live in it. At its peak, the nest may contain several hundred hornets, all descended from the same queen. 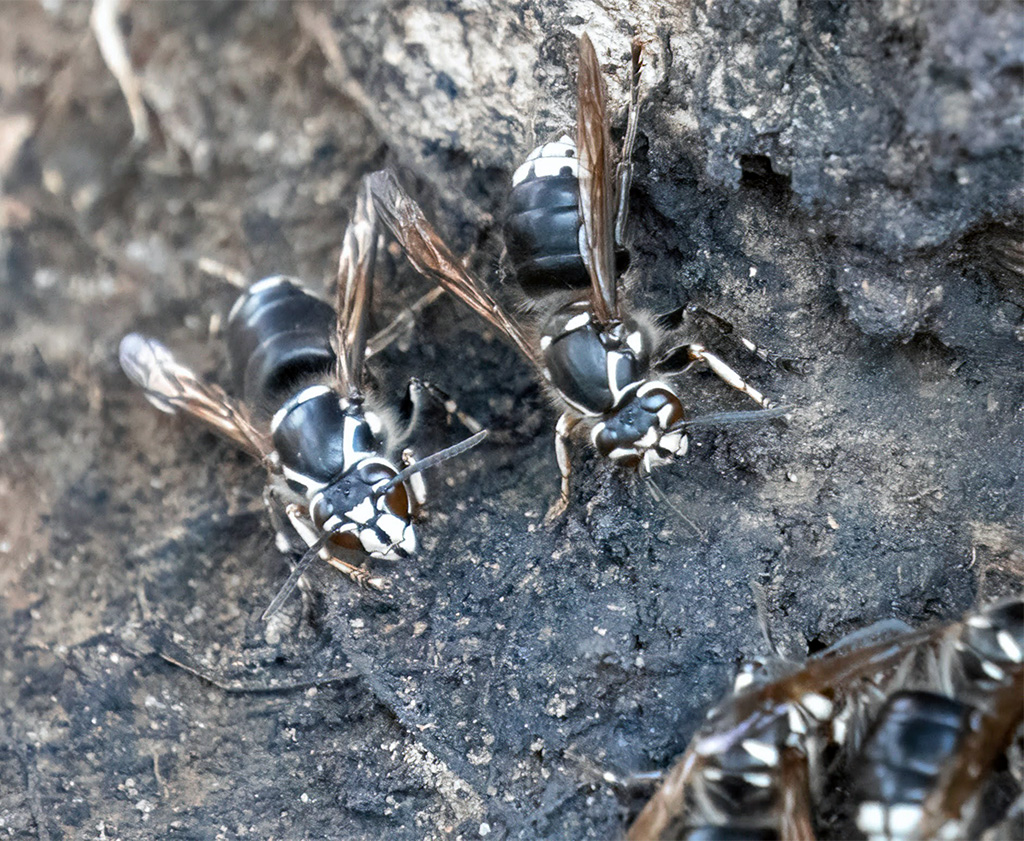 The face of this hornet is black and ivory with reddish eyes. (Photo: Jeanine Farley)

Hornet nests can be built anywhere from 3 to 60 feet off the ground. You might encounter a nest hanging from a tree branch or even a porch roof. The bottom of the nest contains the entrance/exit hole. When threatened, hornets en masse charge out of the bottom of the nest and pursue whatever has threatened them. Unlike honeybees that die after stinging – and so sting only once – angry hornets sting multiple times! If you wander within 3 feet of a nest, you might be considered a threat. 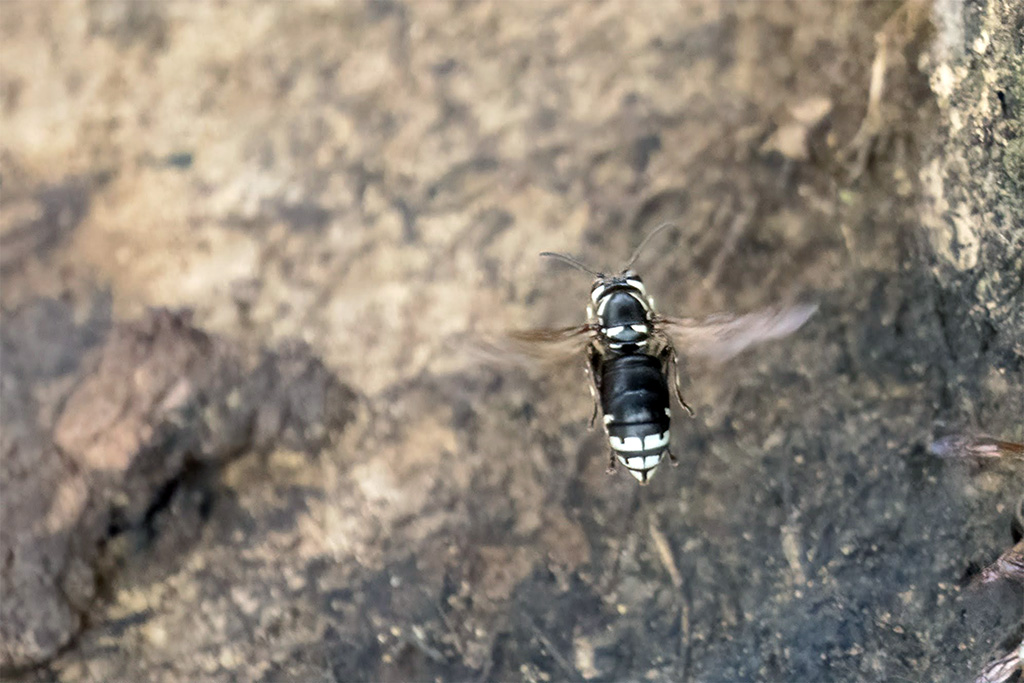 The bald-faced hornet is a close relative of the yellow jacket wasp. (Photo: Jeanine Farley)

After the queen and workers and males die with the onset of cold weather in mid-autumn, the nest sits abandoned and often is destroyed during the winter. Even if the nest endures, it is not reused the following season. The only survivors are the overwintering fertilized queens hibernating in stumps or logs waiting to start colonies in the spring.

A hibernating queen tucks her wings and antenna under her body to protect them. She anchors herself in place with her hind legs. Most queens do not survive the winter, due to predation from insects and spiders. If a winter is warm, queens may emerge too soon and die from lack of food. 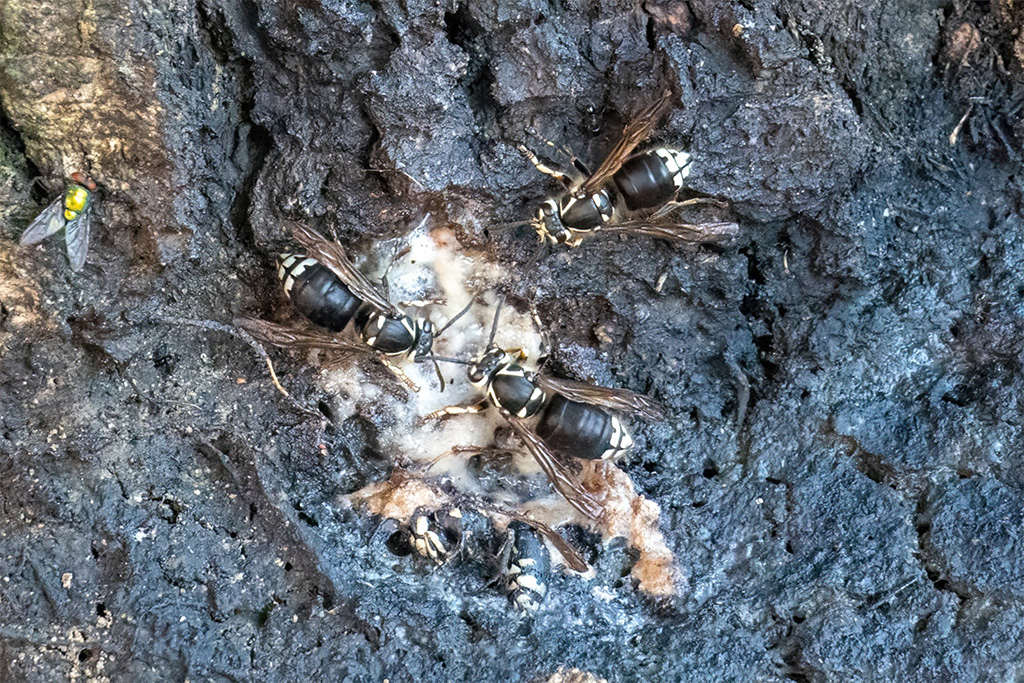 Bald-faced hornets feast on sap at the base of an oak tree. An area that begins on Day One as damp and covered with hornets is, on the third day, dry and attended by only three hornets. (Photo: Jeanine Farley)

As you can tell, life is tenuous for bald-faced hornets. An individual cannot survive alone: It takes the efforts of the entire colony – the queen, the workers, the males and the new queens – to create the next generation of hornets. As the farmer philosopher Henry Schriver once said, “A fly is a fly, and a flower is a flower, but a hornet is an organization.”

Hornets are attracted to light. If you get one in your house, open a window and turn off the lights so it can find its way outdoors. And even though they look fearsome, bald-faced hornets can be beneficial. During summer days, these wasps hunt many garden pests, including flies, other yellow jackets, spiders, caterpillars and bees. When they search for nectar, they also pollinate flowers. Unless a hornet nest is near people, the nest can probably be ignored. The following year, the nest will be abandoned and hornets will nest somewhere else.

Bullfrogs can and will eat almost anything, getting big enough that we then eat them