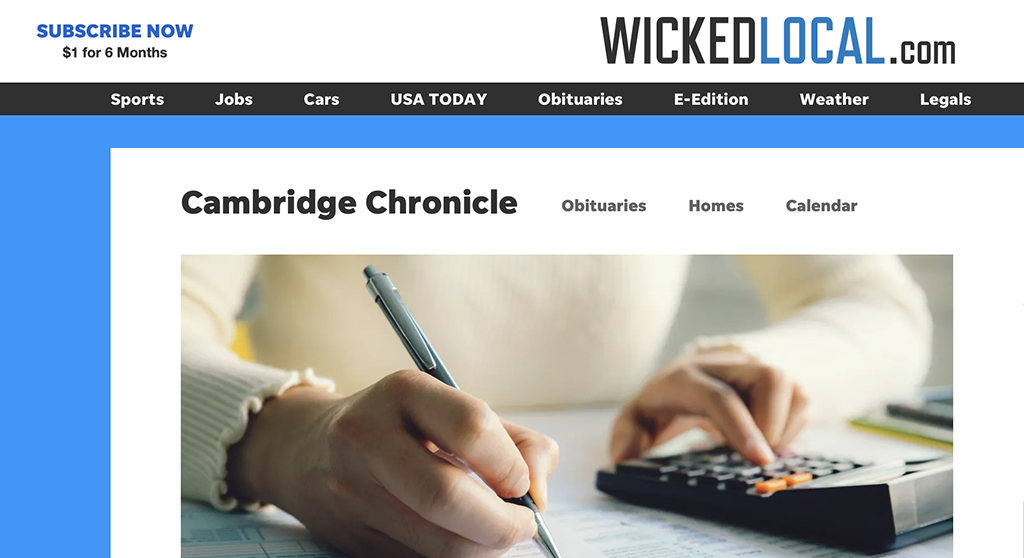 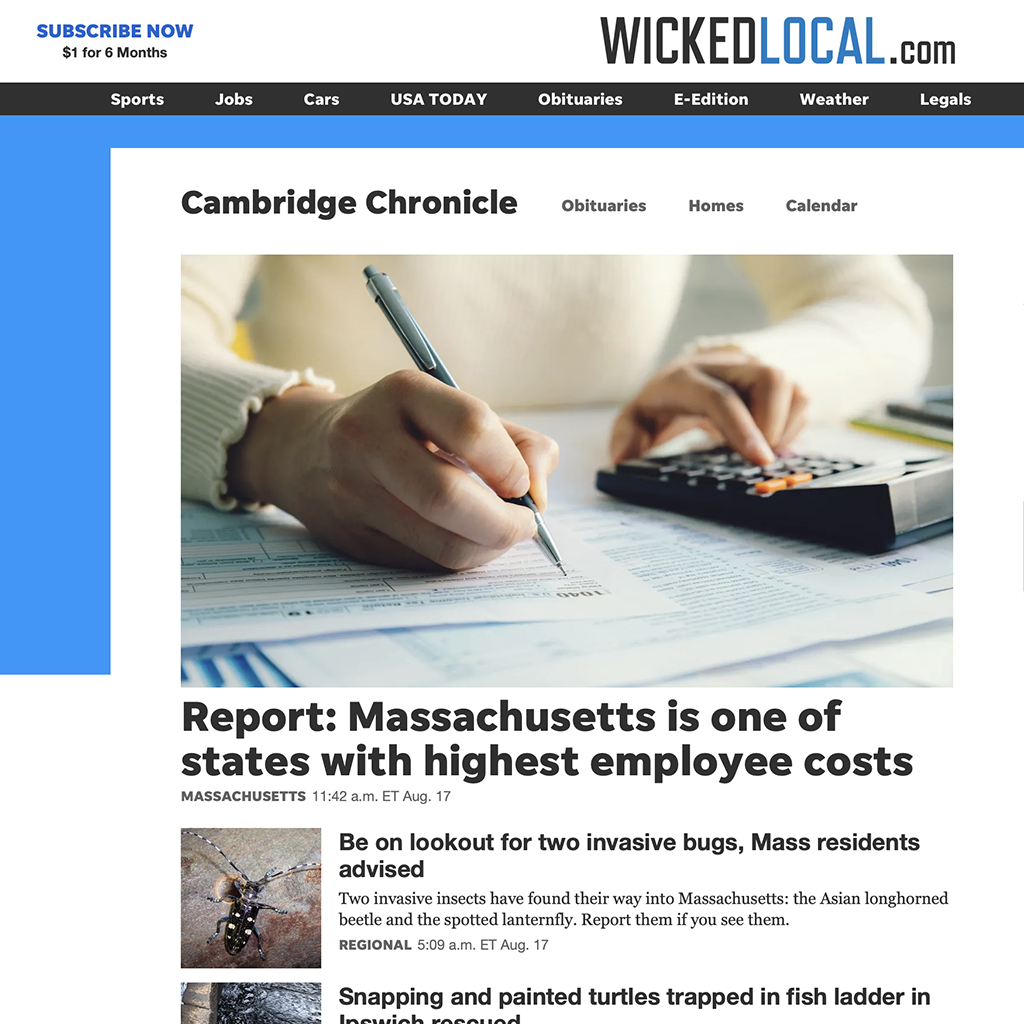 Top news in the Cambridge Chronicle on Wednesday in a screen capture from the “Wicked Local” website.

The lack of recent local news in the Cambridge Chronicle was explained Wednesday by media critic and Northeastern professor Dan Kennedy, whose Media Nation blog revealed that the legacy paper’s sole staffer left to work at an independent site called the Marblehead News.

The Chronicle was considered lucky to have a single staffer left after the November 2019 merger of its owner, GateHouse, with the media corporation Gannett. That $1.1 billion deal created the country’s largest newspaper company, but demanded repeated layoffs and cost savings to pay off debt. While most GateHouse staffers became regional reporters despite working for sites called “Wicked Local,” Will Dowd of Marblehead was brought in to report specifically in Cambridge – a replacement for Amy Saltzman, the longtime staffer who’d left a month earlier.

“For some time, I have looked at Amy’s beat with envy,” Dowd wrote in an introductory letter Nov. 17. “I suspect the most challenging aspect of my job will be deciding what stories should rise to the top and what stories do not – because in Cambridge there is no dearth of them.”

But Dowd’s last reported story was June 6, and his last tweet about local content – graduation photos – was June 10. His next tweet was July 31, and it was for a story in the Marblehead News, a site that introduced itself the previous month with a statement about its significance: “We know the damaging impact on communities that lose local news coverage — participation in town politics drops, corruption increases, and people feel less connected to their neighbors.”

The Marblehead News is a locally owned nonprofit.

“Cambridge is a wonderful place with a rich history and a deeply engaged citizenry. It was a privilege reporting for the city’s residents. My departure was largely a matter of professional integrity and opportunity,” Dowd later tweeted in response to Kennedy.

The now corporate-owned Chronicle has been Cambridge’s weekly newspaper since May 1846, and claims for itself the mantle of being the oldest surviving weekly newspaper in the United States. Its latest stories, sourced from elsewhere in the chain, are about average employee costs statewide, in which Cambridge isn’t mentioned; invasive bugs, again not a specific Cambridge concern; and turtles in Ipswich. There’s an ad for Florida’ s Myrtle Beach that looks like an article, and stories about the Mystic Seaport in Connecticut and a concert in Mansfield.

“The Chronicle is on the brink,” Kennedy wrote of Dowd leaving. “His departure comes just as Gannett has completed yet another round of layoffs, which raises questions about what the chain’s intentions are for filling any open positions. It doesn’t look good.”

The national newspaper chain reported that it lost about $54 million in the second quarter of 2022. Gannett’s CEO has reportedly said the company was set to launch “a significant cost-reduction program.”

Here in Massachusetts, it’s hard to see what else the company could possibly cut. Gannett ceased printing about 20 weekly papers statewide this spring. These included the Waltham News Tribune along with the Watertown, Newton and Brookline Tabs.

In addition to there being no dedicated staff, a writer who contacted the Wicked Local chain in June looking for work said he was told, “Wicked Local last month changed its local journalism strategy so we are no longer taking on freelancers on the weekly side.”

A paper covering a city of more than 118,000 people should have a staff of several but has zero, Kennedy said, and “If Dowd isn’t replaced, that would represent a grotesque abdication of responsibility.” Kennedy’s article is here.

Gannett editors and executives responsible for the Chronicle have ignored previous requests for insight on plans, and it gets increasingly difficult to find people to query. Requests for information were left this time at a general company mailbox and with Jesse Floyd, the regional director of multimedia.