Bike lanes and safer streets benefit everyone, including businesses

Bike lanes and safer streets benefit everyone, including businesses

Studies from cities around the world have shown that bike lanes in commercial districts at worst have a neutral impact on local businesses and in many cases have a positive impact, increasing customers and sales.

One example from Toronto, Canada, is Bloor Street West, a busy commercial corridor not unlike Cambridge’s Massachusetts Avenue – it also has high cycling and motor vehicle traffic volumes. In 2016, the city installed protected bike lanes along a section of Bloor Street West, which necessitated the removal of 136 parking spaces (approximately half of the on-street parking spaces). Despite the removal of those parking spaces, researchers from the University of Toronto and the Toronto Center for Active Transportation found that businesses on Bloor Street West performed similarly or even better compared with businesses along a similar, nearby commercial corridor, Danforth Avenue.

Cyclists, pedestrians and even drivers reported feeling safer traveling along Bloor Street West after the bike lanes were installed. Interestingly, while the proportion of people traveling by bike more than doubled after installation of the bike lanes (to 18.1 percent from 6.9 percent), the proportion of people arriving by car was unchanged (9.9 percent versus 8.3 percent).

Some may say, “But Cambridge is not Toronto or Berlin!” So what are the numbers for Cambridge? Data from the U.S. Census Bureau shows that 32.7 percent of households in Cambridge do not own a motor vehicle. Street intercept surveys conducted by the Community Development Department shows that at most, 33 percent of customers in Cambridge’s commercial districts arrived by car (driving alone, carpooling or taxi/ride share). Most Cambridge customers do not shop by car, and instead arrive by foot, transit or bike. 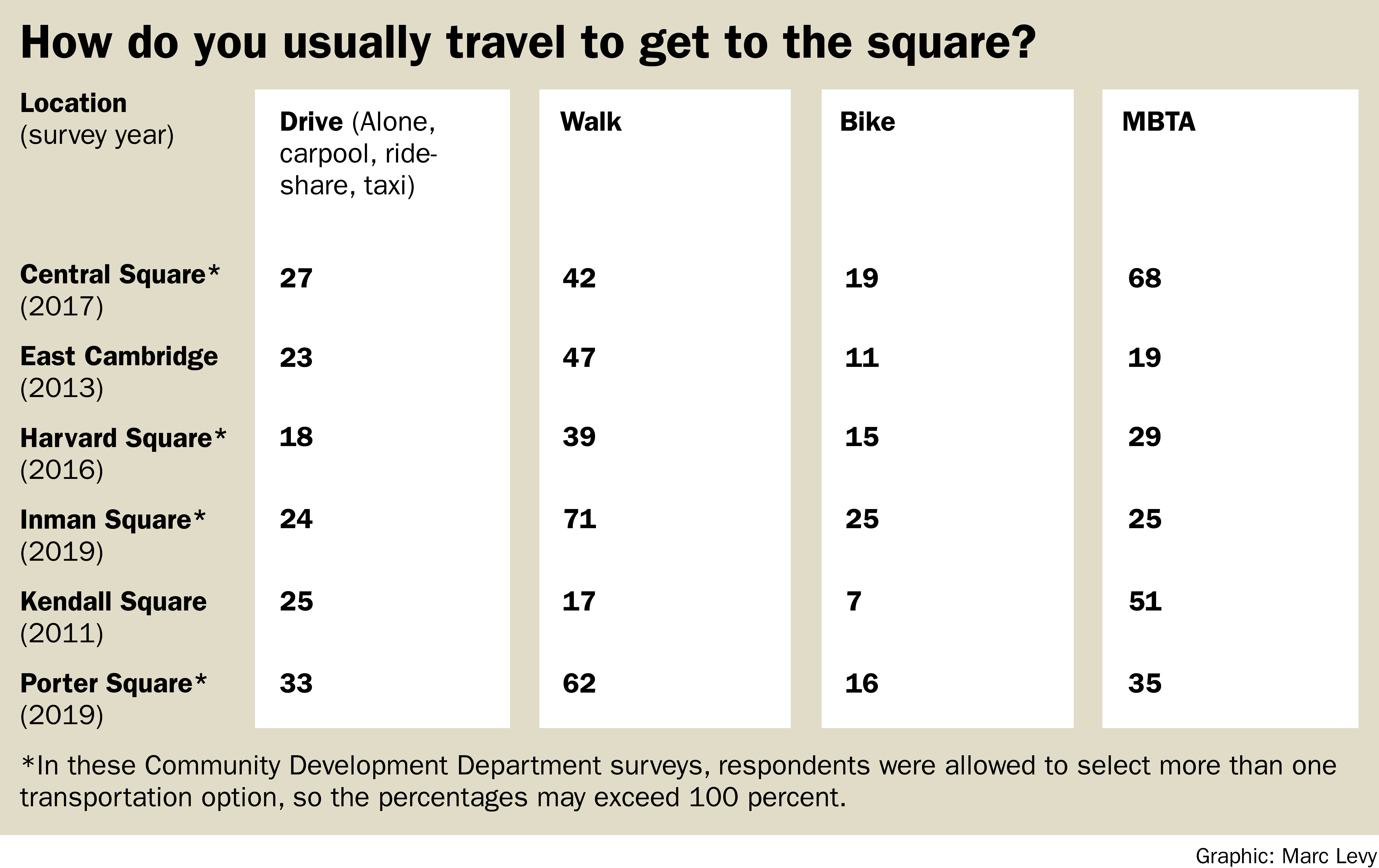 Although many business owners believe that more parking would bring in more customers, when customers were asked what would bring them to Cambridge’s commercial squares more frequently, customers mostly talked about wanting a better mix of retail, more affordable options, special events and improved street safety infrastructure.

Cambridge installed protected bike lanes on sections of Brattle Street (near Harvard Square) and Cambridge Street (between Inman and Harvard Squares) in 2017. Both streets saw increases in the number of people traveling by bicycle on the corridor, and overall, the majority of people surveyed reported visiting the corridor as often, or even more often, compared with before bike lane installation (86 percent on Brattle Street; 82 percent on Cambridge Street). Furthermore, there was a significant reduction in speeding on Cambridge Street; the speed limit on Cambridge Street is 25 mph, and the 85th percentile speed (i.e., the speed at which 85 percent of vehicles are traveling at or below) decreased to that from 31 mph after protected bike lanes were installed. Preliminary data suggests a reduction in crashes on both corridors, although more data is needed. Today, Brattle Street and Cambridge Street continue to be lively corridors.

“Nobody is against bike safety,” and yet there are lawsuits against the City of Cambridge that would have the city rip out existing separated bike lanes pending further discussion. To claim there has not already been extensive public discussion on the implementation of bike lanes is false ,and is frankly insulting to the hard work of Cambridge City staff.

The Cycling Safety Ordinance was developed through extensive public discussions and consultations with city staff, the city manager and the City Council. The project areas defined in the CSO come from the Cambridge Bicycle Plan, first published in 2015 with input from more than 3,000 members of the public. It was updated in 2020 with input from more than 1,500 people through a combination of in-person and online forums. The streets chosen for separated bike lanes are “major through-streets with higher traffic volumes and speeds [that] often provide access to shopping, jobs [and] neighboring communities,” according to the Cambridge Bicycle Plan. The ordinance was a prominent issue in the 2017, 2019 and 2021 municipal elections, and each time, a supermajority of elected councilors pledged to support it.

For each bike lane safety improvement project, there are at least three to four online community meetings and often at least one to two in-person pop-up events, during which city staff collect feedback from members of the public and update their proposals accordingly. Because the CSO has defined project areas, public meetings to discuss specific bike lane projects can focus on determining the best possible street configuration that takes local needs into consideration. For instance, proposals to convert Upland Road into a one-way street were scrapped based on resident feedback. In response to concerns about accessible/disability parking, the city added three parking spaces for that need to the North Massachusetts Avenue project where previously there were none, and four spots to the Porter Square project where previously there was only one. More recently on Garden Street, the city presented proposals to convert sections of Garden Street into a one-way street to address public feedback about maximizing parking space. Discussions for Garden Street are ongoing, with the fourth community meeting planned for mid-September. Furthermore, large segments of Massachusetts Avenue (the so-called “MassAve4” segments) were designed around balancing the safety of pedestrians, cyclists and small-business needs, leading to a “partial construction” approach to much of the corridor that would see the removal of the concrete median to provide more street space for parking, loading and outdoor dining.

For a variety of reasons, not every suggestion can be implemented. This does not mean public feedback is ignored, but instead reflects real-world constraints (e.g., limited physical space). The Covid pandemic has completely upended many people’s sense of normalcy and, understandably, change can seem daunting or scary. Most people already walk, bike or take transit to shop at Cambridge’s unique and vibrant commercial districts. Making our streets safer by improving pedestrian, bike and transit infrastructure will only bring more people to our squares and to our local businesses.

The author does volunteer work with Cambridge Bicycle Safety and the Boston Cyclist Union.