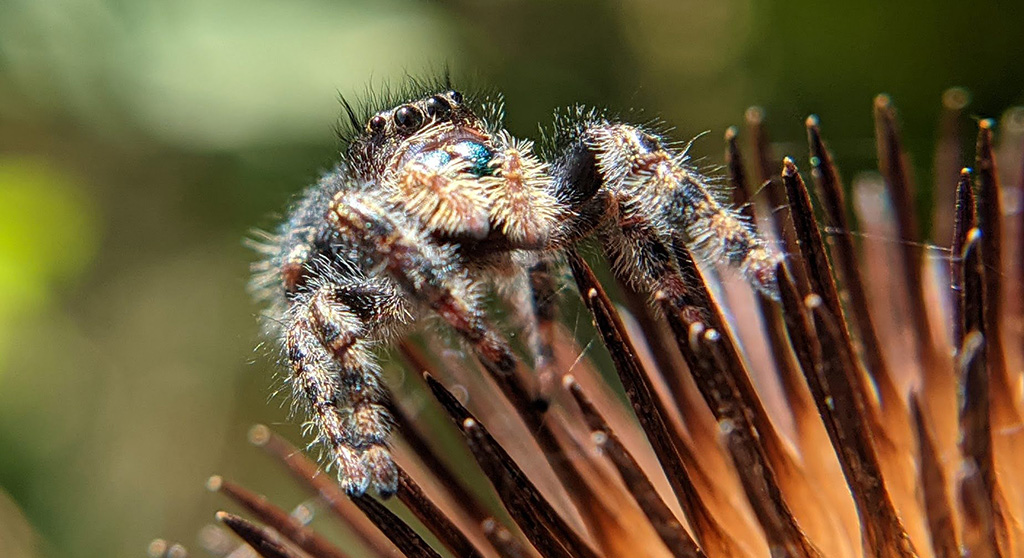 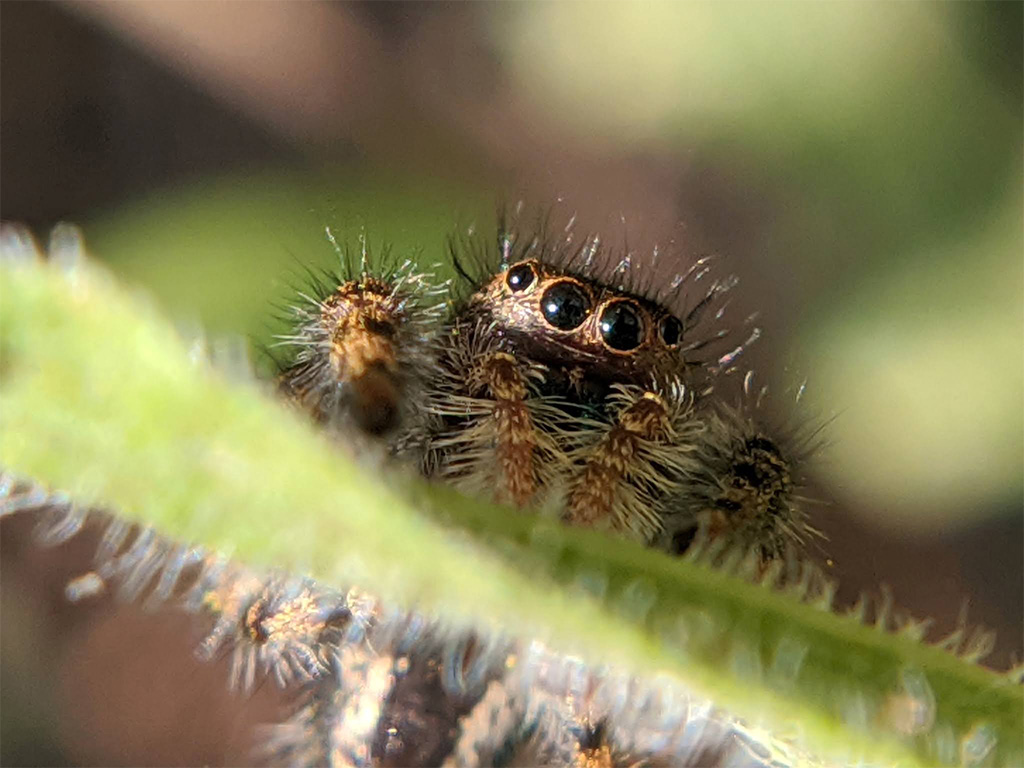 What’s small and hairy and jumps? Perhaps a bold jumping spider, which is one of the most common jumping spiders in North America. These spiders are not dangerous. If you pick one up, for example, it probably will not bite you (but I make no guarantees). If it did bite you, its fangs would probably not penetrate your skin, and if they did pierce the skin, the venom is too weak to cause harm to humans. 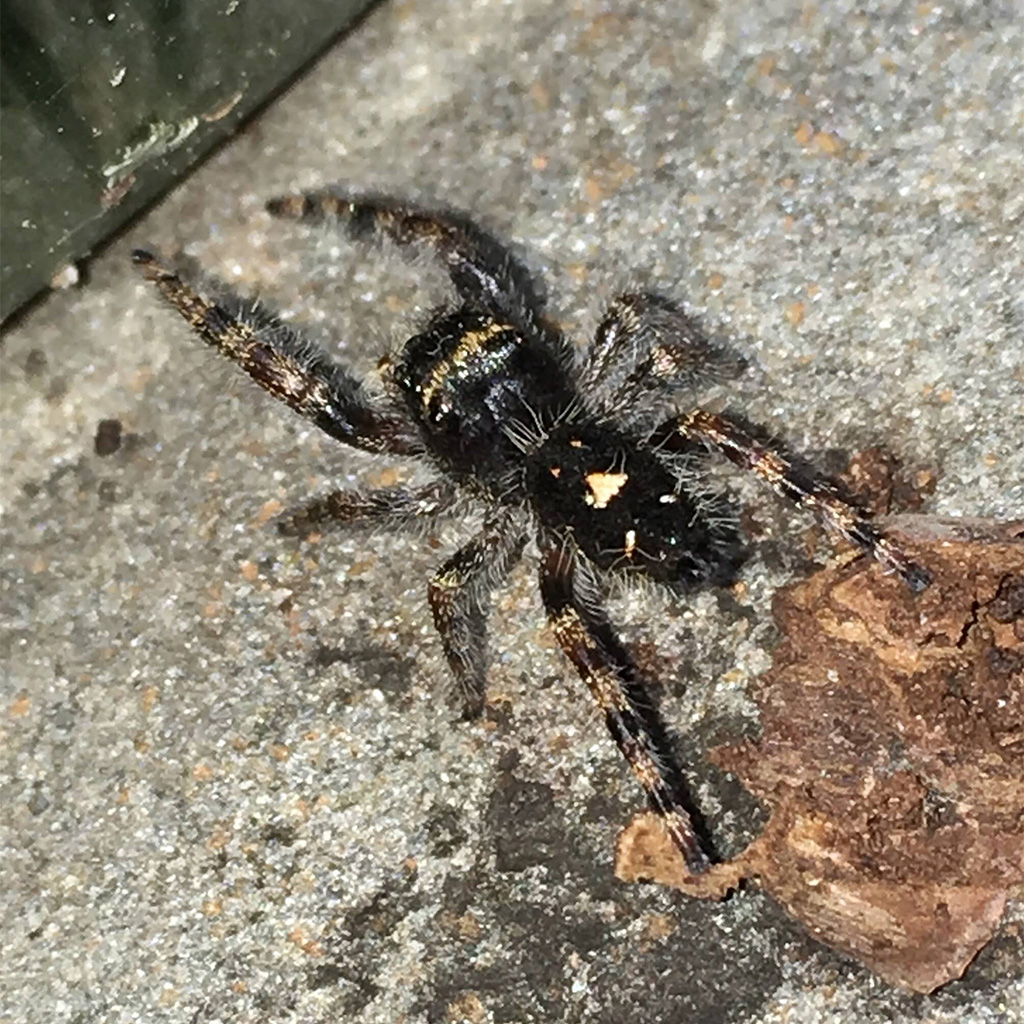 These spiders (Phidippus audax) are so named because they are fearless and quick to jump on and attack prey that is larger than they are. “Audax” is from the word audacity, meaning “bold” or “daring.” They prey on many insect pests, including mosquitoes. These little critters (one-quarter to three-quarters of an inch) are also able to jump four times their body length.

Probably the most prominent feature of jumping spiders is that they are hairy. Bold jumping spiders are mostly black with a white or reddish triangle and two small dots on their abdomens. Their fangs or mouthparts (chelicerae) are metallic green – a feature sometimes more noticeable on males. 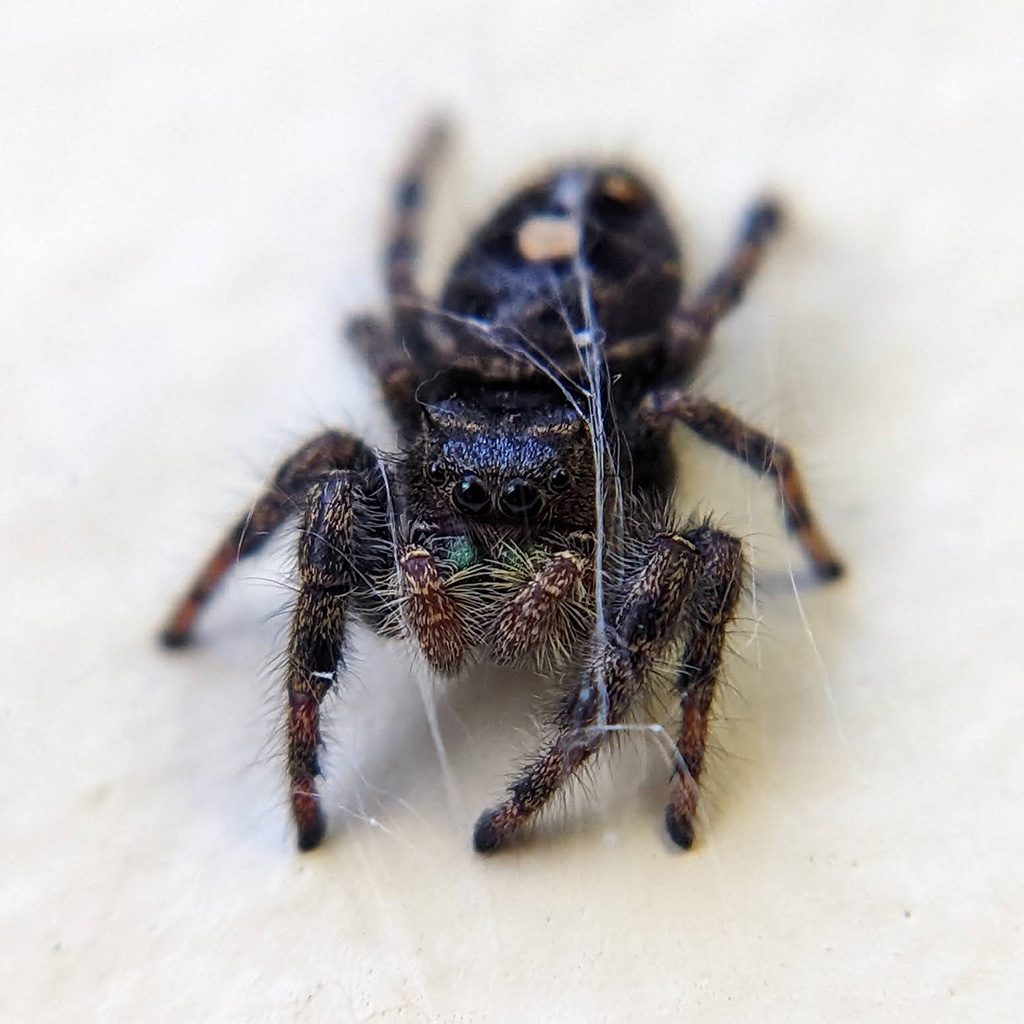 Bold jumping spiders hunt during the day. They sneak up on their prey and pounce, injecting venom that paralyzes their prey. We all know that spiders have eight legs; most spiders, including bold jumping spiders, also have eight eyes. This gives them the sharp vision they need to stalk their prey. In fact, jumping spiders – with eyes in a semicircle around the head, each pair of a different size, with the two in the middle being the largest – have the sharpest vision of all spiders. These two largest eyes give the spider good three-dimensional vision, while the other six eyes provide it with 360-degree views of the surroundings. 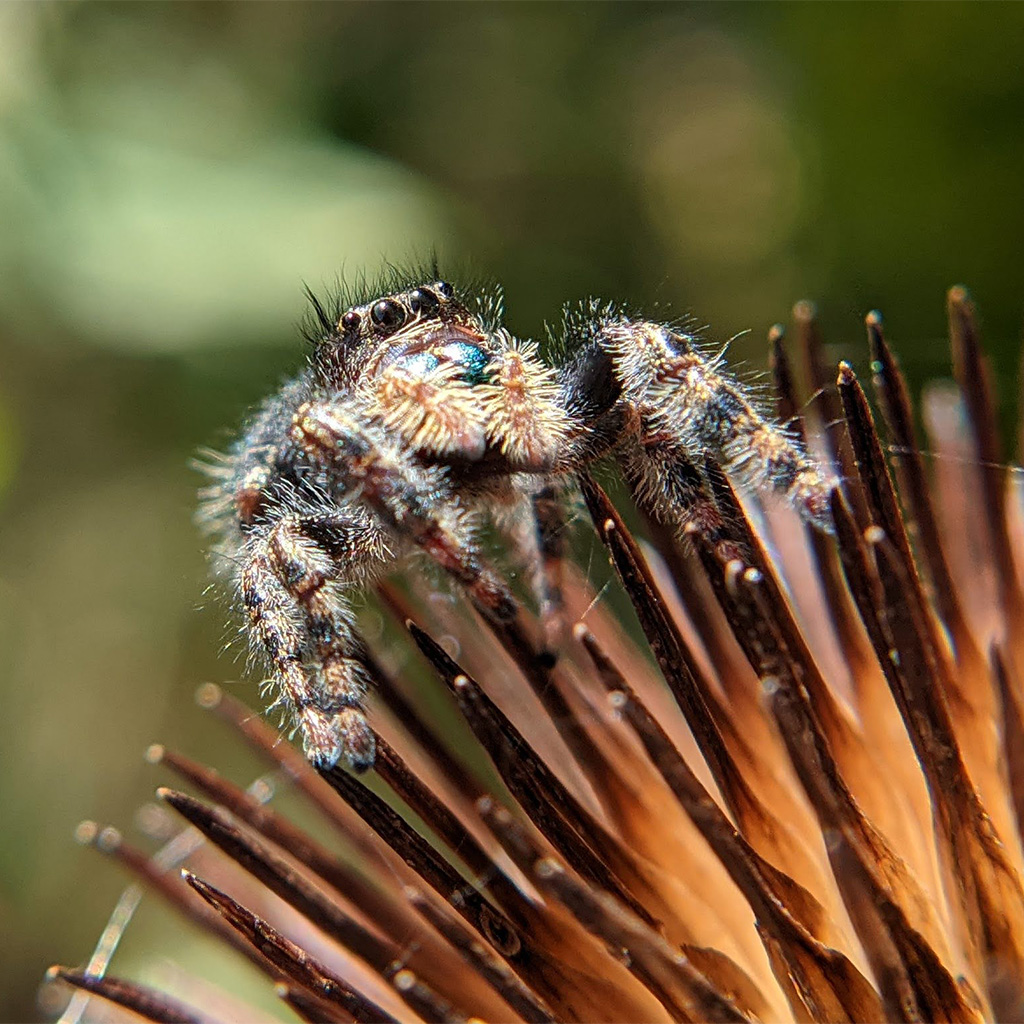 Bold jumping spiders are the state spider of New Hampshire, but this spider hunts on Prospect Hill in Somerville. (Photo: Claire O’Neill/Earthwise Aware)

Jumping spiders do not spin webs, but before they jump they attach a strand of silk to the surface they are on. If they jump and miss, they are still tethered to the tree or wall from which they jumped. They also use silk to make a cocoonlike resting place (in dried leaves, under rocks, in tree crevices) where they, eat their prey and protect their eggs. 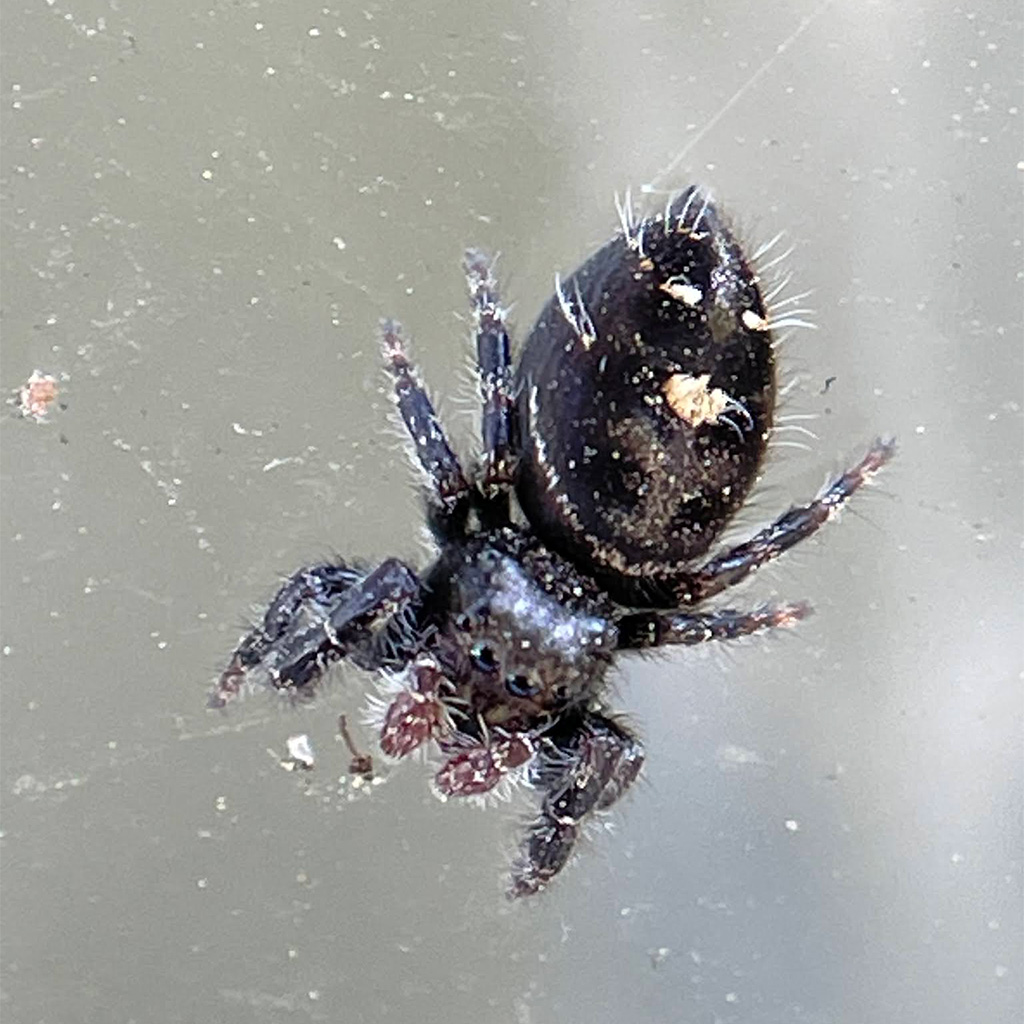 Similar to snakes, spiders shed their outer skin as they grow larger. Bold jumping spiders stop the process in the fall as adolescents and overwinter as sub-adults. In the spring, they finish growing to adulthood. They breed from spring to early summer; the female bold jumping spider produces an egg sac containing 30 to 170 eggs. (With six to eight egg sacs per season, that’s a lot of baby spiders.) She guards the egg sac until the baby spiders hatch; then the babies are on their own.

The spiders prefer flat vertical surfaces where they can see and easily pounce on their prey. Therefore, these spiders like broad-leaved plants such as milkweed, for example, or tree trunks, fenceposts and house siding. If you should happen to see a bold jumping spider inside your cellar or on your lawn furniture, let it be; it is shy and harmless, will most likely run or jump away if it detects you, and can help control insect pests. 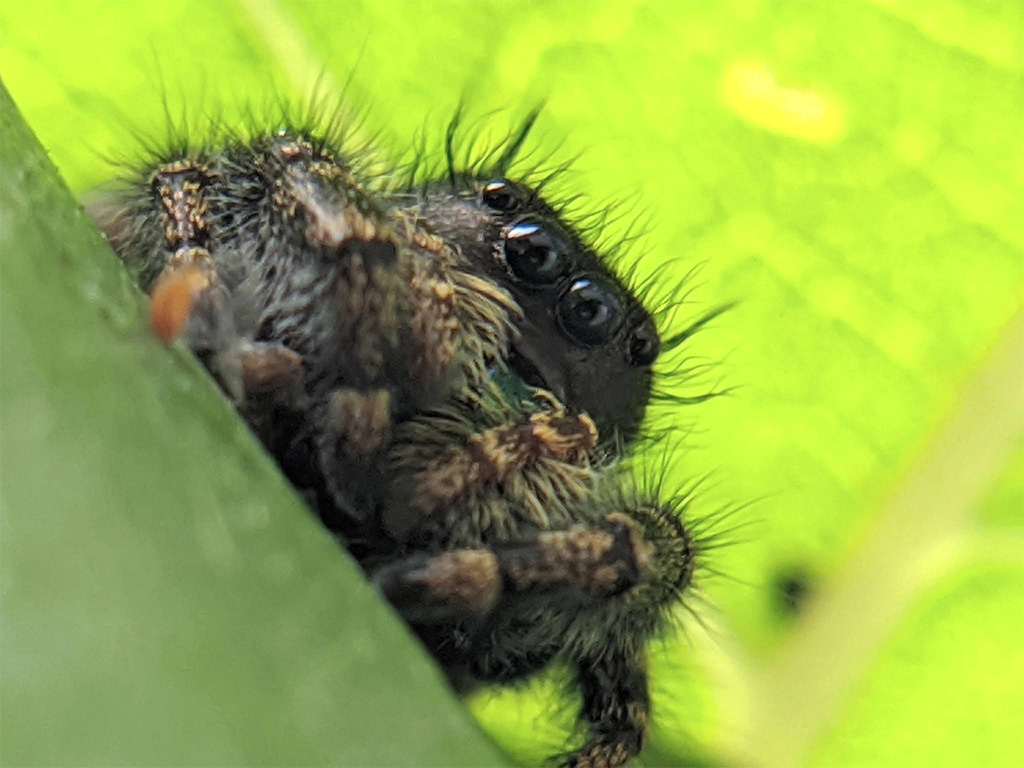 Bold jumping spiders like this one in the Cambridge Highlands can detect vibrations from a great distance and jump four times its body length. (Photo: Claire O’Neill/Earthwise Aware) 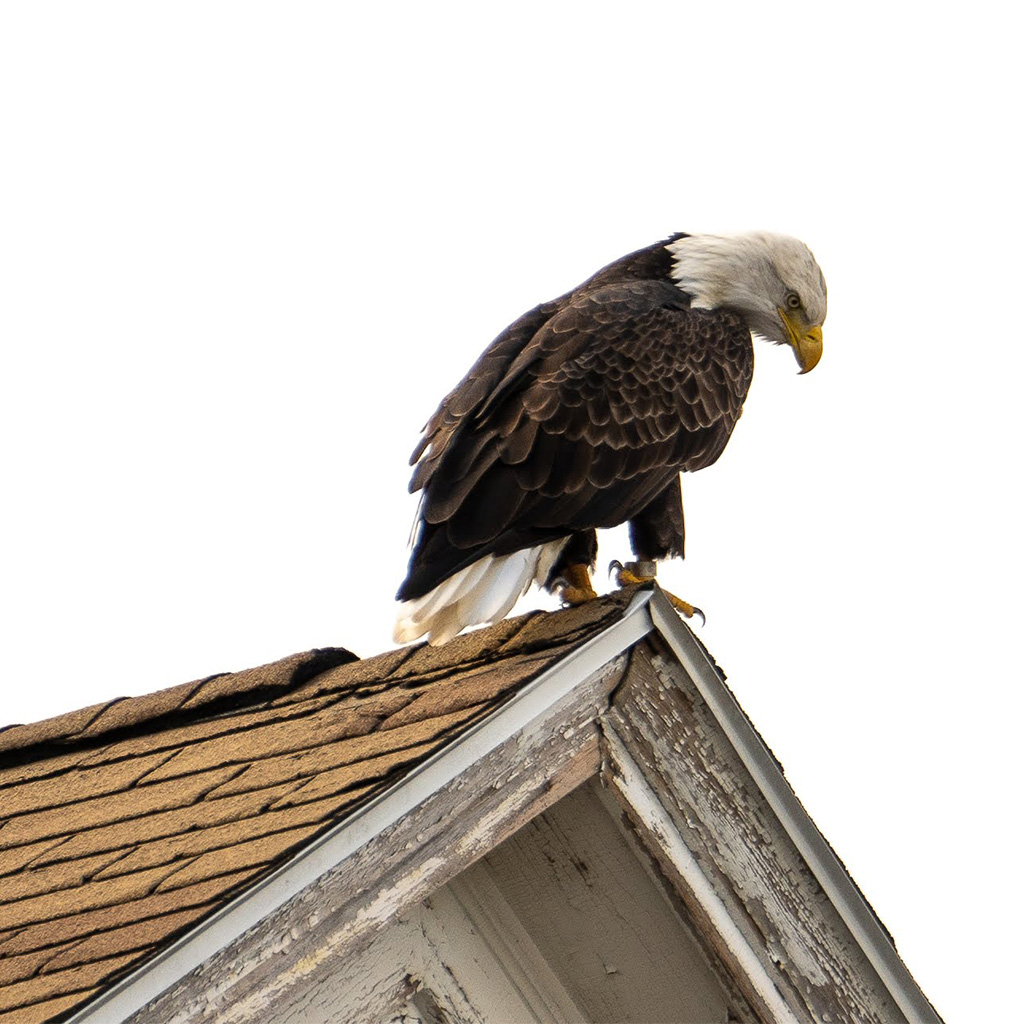 A bald eagle is spotted in Ball Square, Somerville, in mid-October. Its unusual left eye identifies it as KZ, the male of the nesting pair on the Mystic Lakes. (Photo: Jeanine Farley)