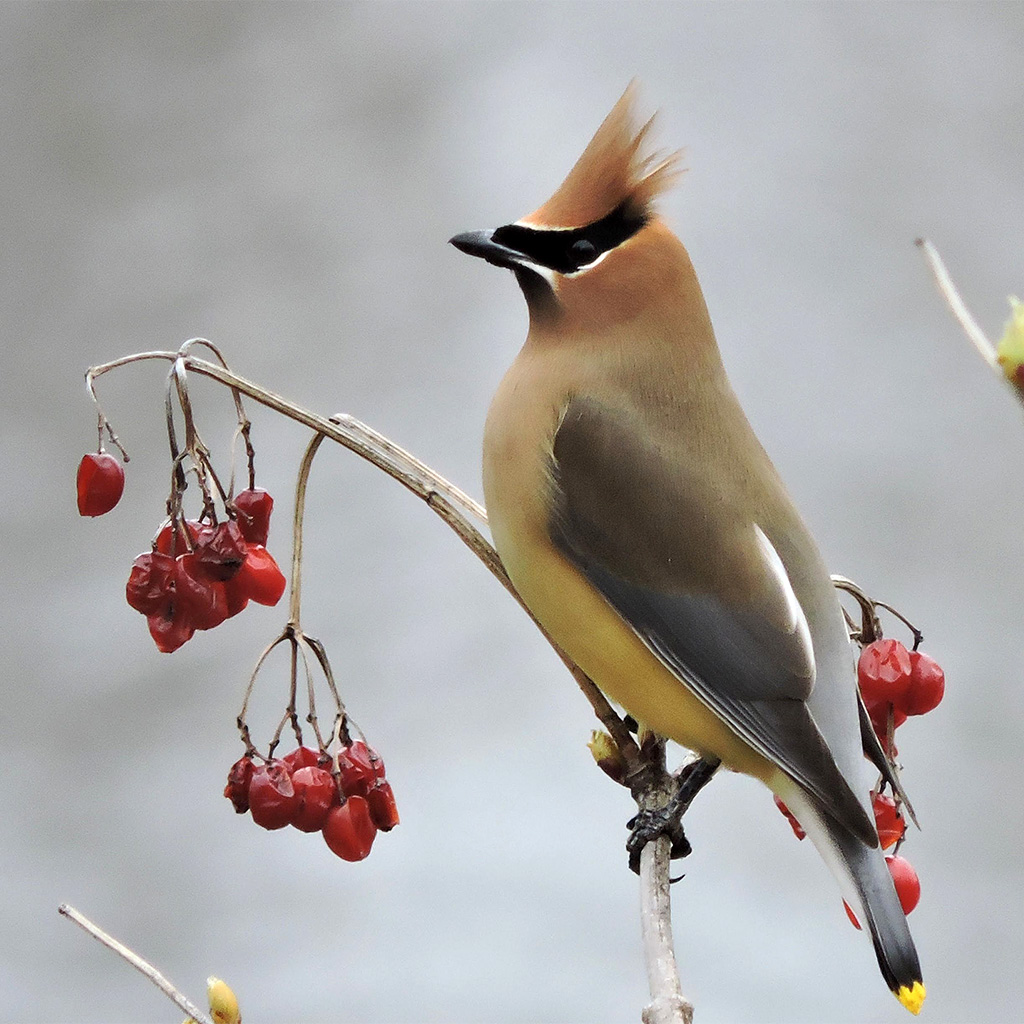 Berries, berries, berries! These birds eat berries (and other fruit). More than most other birds, cedar waxwings are fruit eaters. Other birds would die from such a restricted diet because although sugary fruits are rich in energy, they are deficient in protein.

In the past, people ate these birds during holidays because the waxwing diet of fruit makes them tender and juicy. In 1830, John James Audubon wrote about these birds:

Various other trees, supply them with plenty of berries and fruits, on which they fatten, and become so tender and juicy as to be sought by every epicure for the table. I have known an instance of a basketful of these little birds having been forwarded to New Orleans as a Christmas present … It was afterwards discovered that the steward of the steamer, in which they were shipped, made pies of them for the benefit of the passengers. 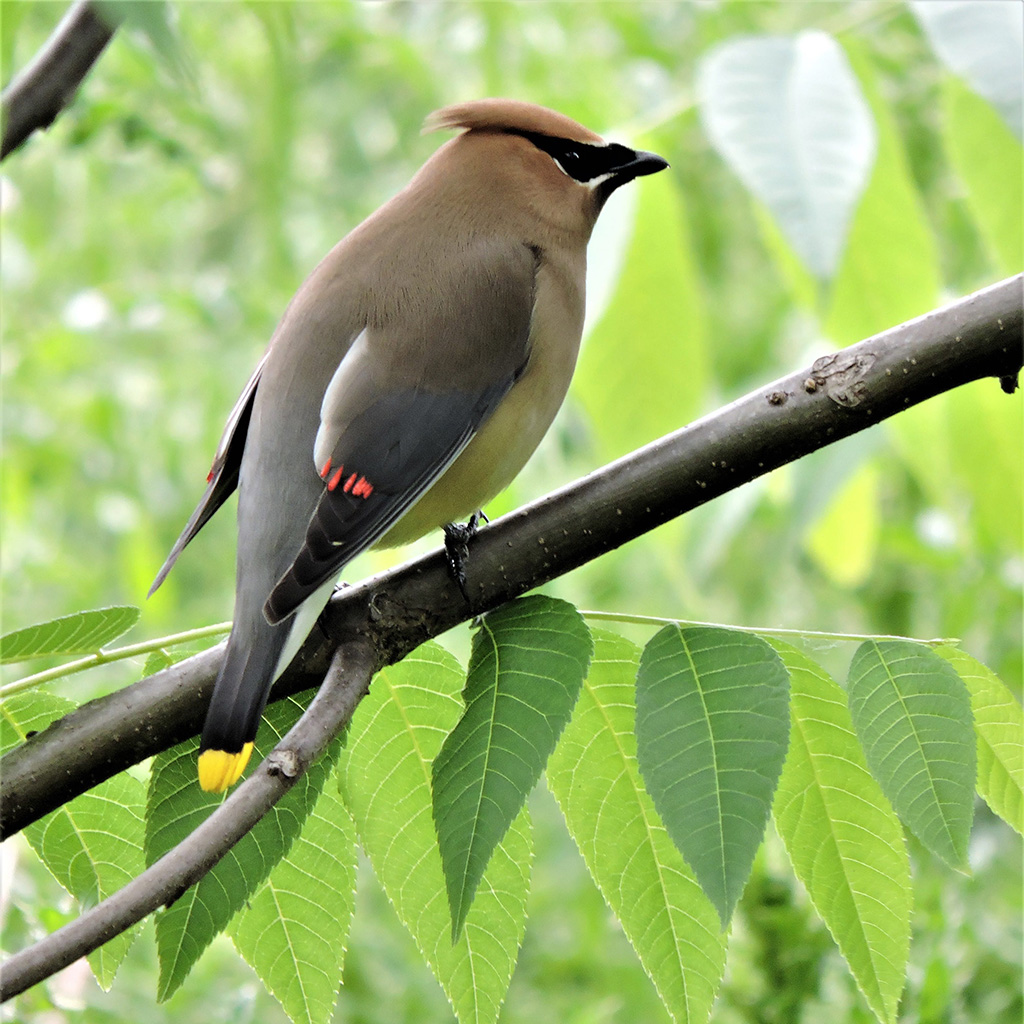 In the summer, cedar waxwings will eat insects, especially when raising their young; they will also eat flowers and their pollen, which is also rich in protein – the reason bees collect pollen. In summer, fall and winter, waxwings eat almost any kind of fruit, but they prefer berries. Sometimes, these birds can become drunk if they eat too much overripe, fermented fruit. Most other fruit-eating birds regurgitate the fruit seeds, but cedar waxwings digest the entire fruit, expelling the seeds in their droppings. They are therefore important for seed dispersal.

In summer, waxwing flocks feed on serviceberries, strawberries, mulberries, dogwood berries, wild cherries and raspberries. These birds get their name from their appetite for cedar berries in winter. In the winter, flocks of cedar waxwings also gobble the fruit of mistletoe, juniper, mountain ash, honeysuckle, crabapple, hawthorn or just about any other fruit they can find. 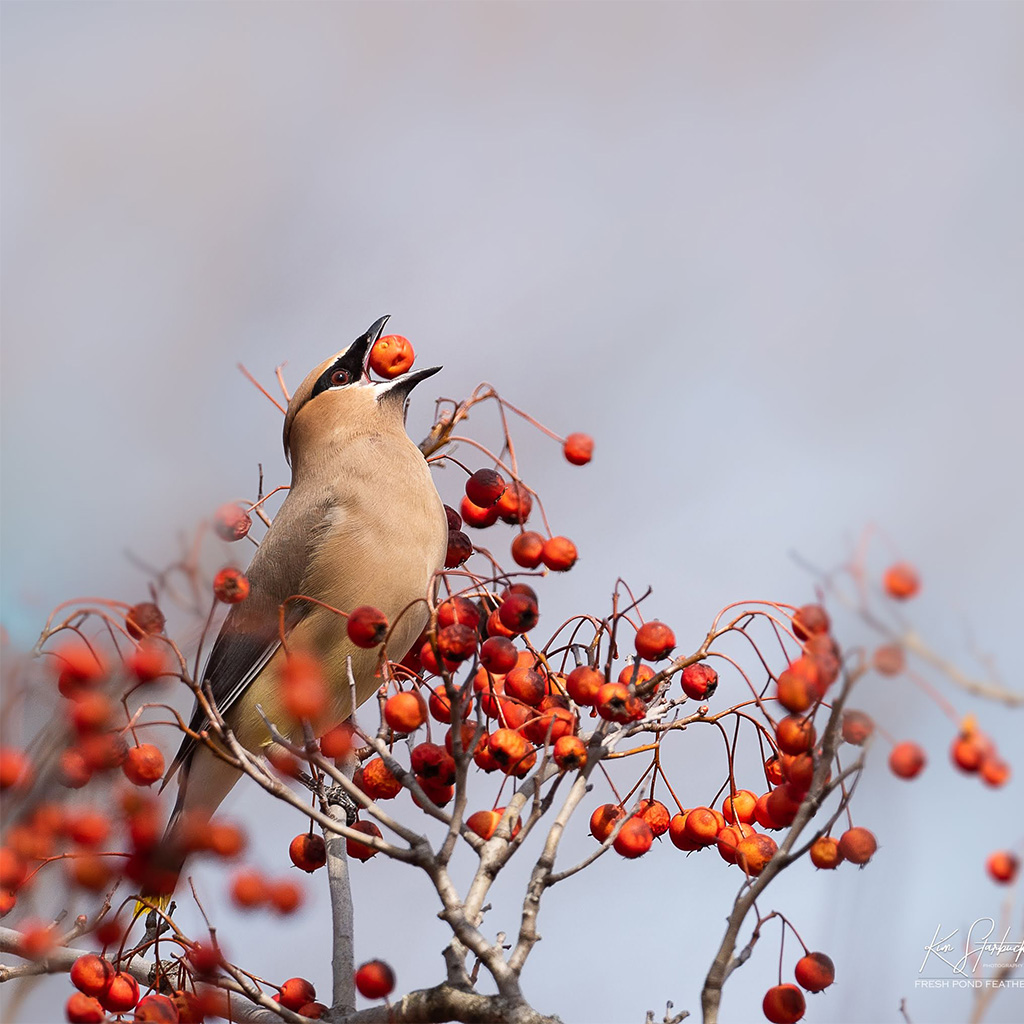 John James Audubon described the diet of these birds this way:

The appetite of the Cedar Bird is of so extraordinary a nature as to prompt it to devour every fruit or berry that comes in its way … the whole group is in motion, dispersing over every bough to pick the berries which attracted them from the air … Every flock passing within hearing is invited to join in the feast, and in a few hours the tree is entirely stripped of its fruit. In this manner they search the whole of the forests, and towards winter are even satisfied with the berries of the Dog-wood. As the cherries and mulberries ripen . . . the Cedar Bird pays them frequent visits, and when these are out of season, the blackberries and huckleberries have their turn. After this, the Cedars supply a new and favorite food. I think the name of Fruit-devourers would be more applicable to these birds. 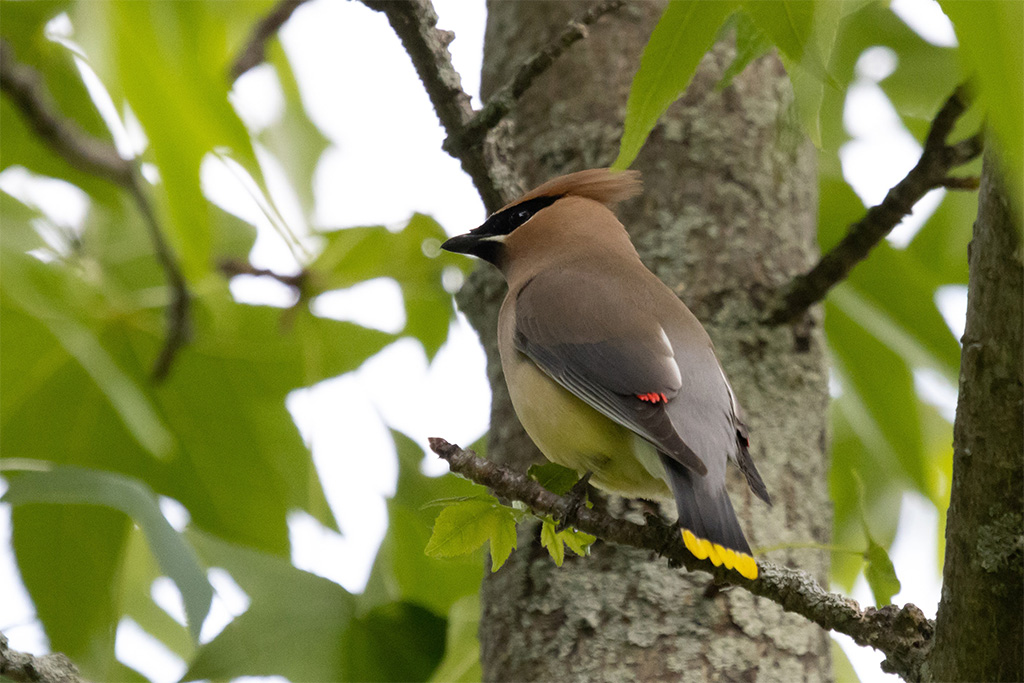 It is not too surprising that farmers in the 1800s and 1900s hated these birds (which they called cherry birds for their penchant to eat cherries). There is no doubt that these birds caused damage to fruit orchards. In 1908, fruit growers in Vermont got a bill passed in the Assembly that allowed farmers to shoot cedar waxwings because they were an agricultural pest. When the bill came up before the Senate, however, supporters of the bird brought in specimens to show the lawmakers. The lawmakers thought the bird was so cute and engaging that they voted against the bill. Today national laws protect the cedar waxwing. 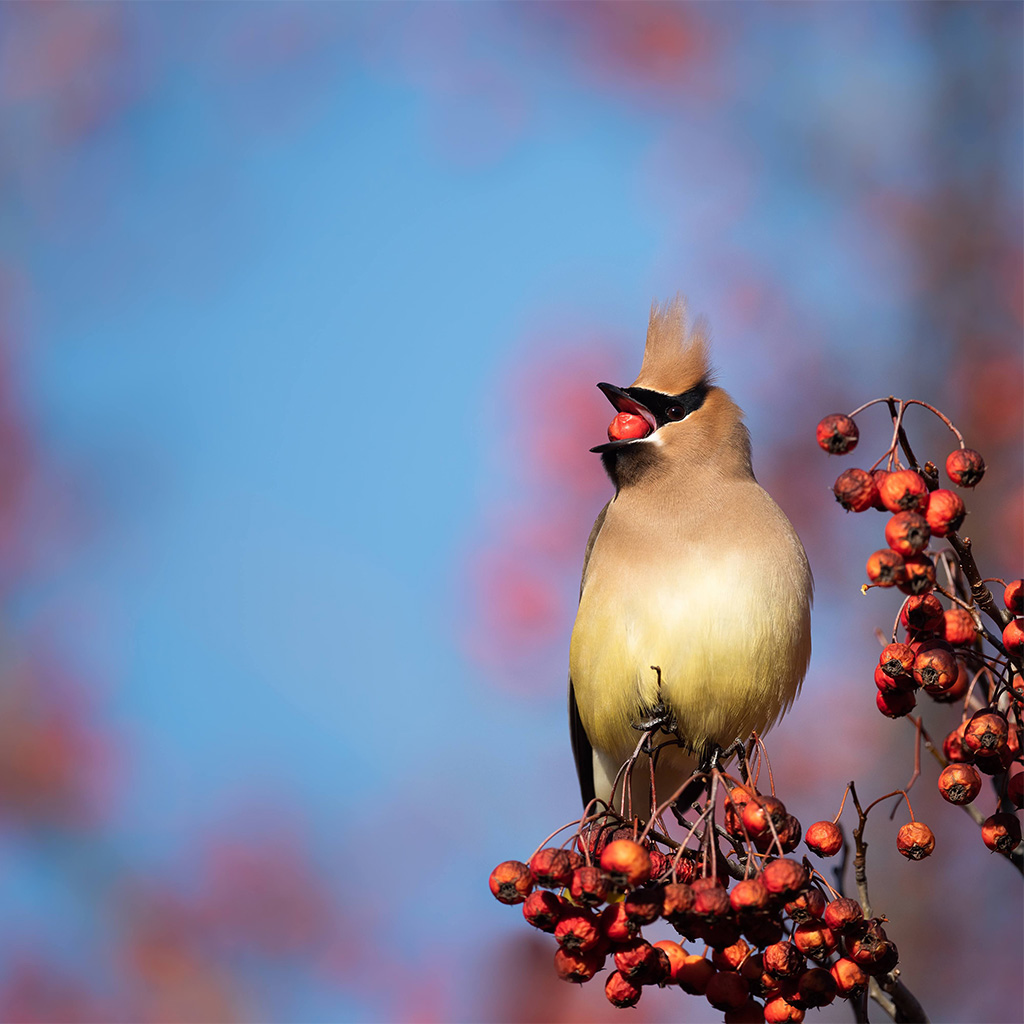 Male and female cedar waxwings sport black masks across the eyes, but the males have a darker chin. (Photo: Kim Starbucks/Fresh Pond Feathers)

Adult cedar waxwings are monogamous. In the spring, a male courts a female by giving her fruit, flower petals or an insect. If the female is interested, she hops away but returns to pass the gift back to the male, who passes it back to the female. This routine continues several times until the female finally eats the gift. Then the female chooses a nesting site and together the couple builds a nest, which takes five to six days with more than 2,500 trips for materials such as roots, grasses and pine needles. The female then produces a clutch of five to six eggs, which she incubates for a couple of weeks while the male brings her food. The youngsters hatch and stay with the parents for about two to three weeks. At first, the parents feed the youngsters mostly insects, but after a few days, they introduce berries. When the young leave the nest, these highly social birds join a flock. 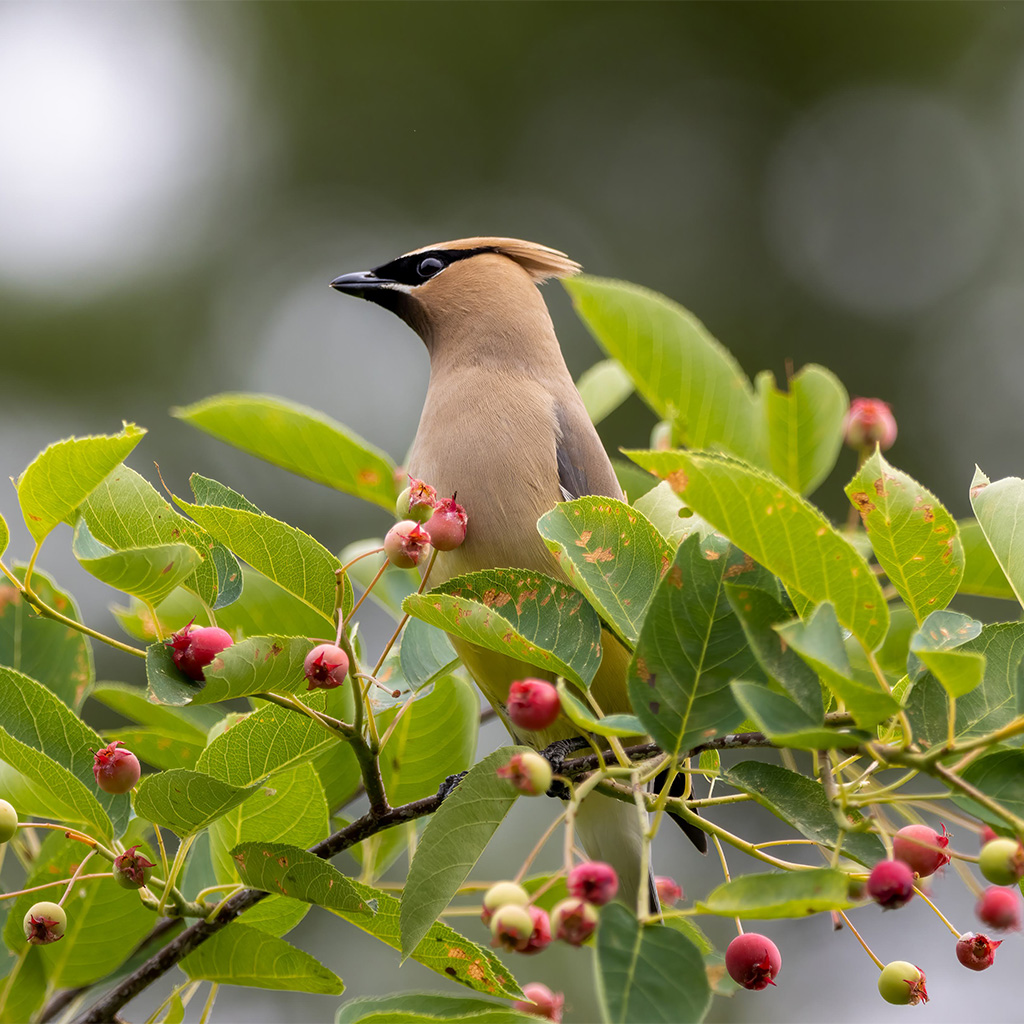 Cedar waxwings have a crest similar to that of a cardinal. (Photo: Richard George)

Cedar waxwings’ most prominent feature is a small cluster of crimson-red spots on the tips of their secondary flight feathers. These red-pigmented layers of the wingtip are surrounded by a transparent cuticle, giving the red feathers a waxy look. Male and female cedar waxwings look alike, except that the male has a darker chin. Both have a crest like a cardinal’s and a black mask across the eyes. If a cedar waxwing eats the fruit of an invasive Eurasian bush honeysuckle species, the bird grows orange-tipped tail feathers, but under normal circumstances, the tail feathers are yellow tipped. 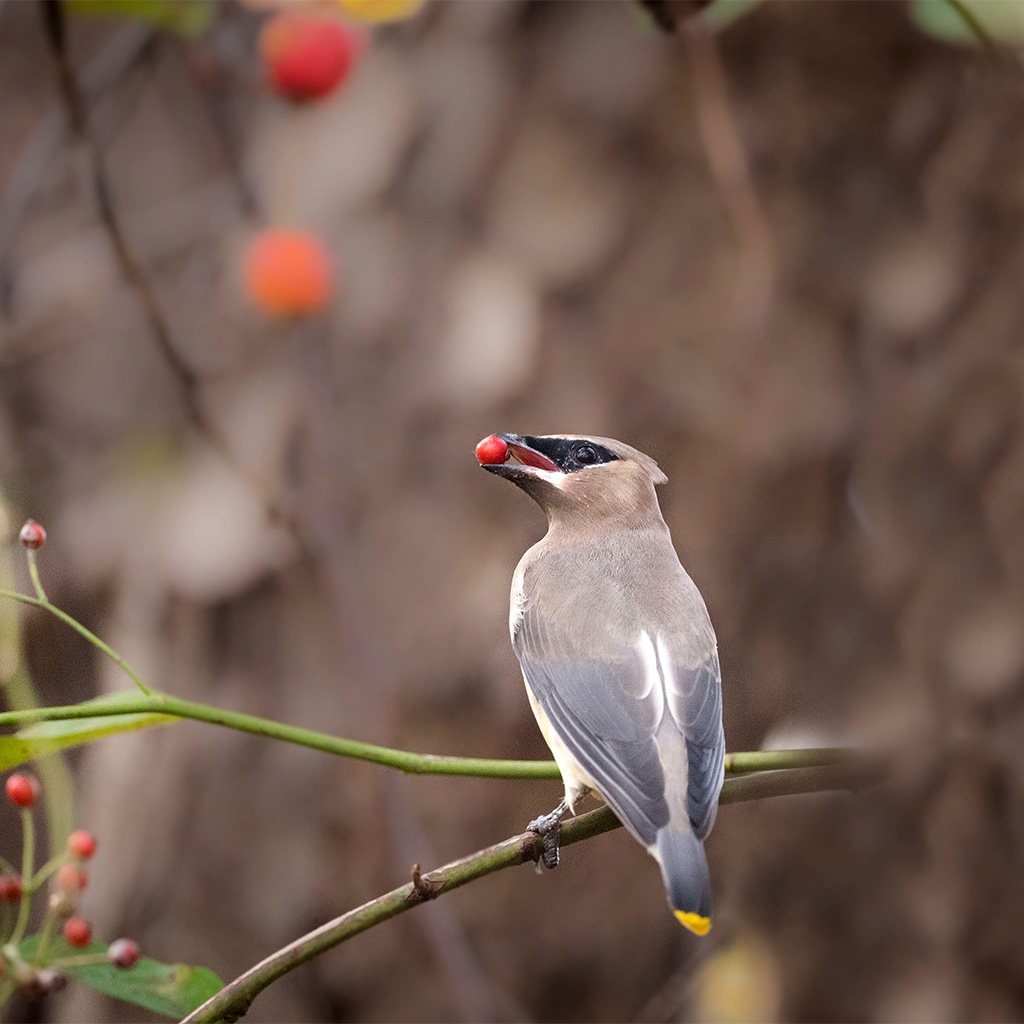 Cedar waxwings (Bombycilla cedrorum) are similar in size and shape to starlings, and, like starlings, often form large flocks that divide and rejoin in the sky like flocks of starlings. The name Bombycilla comes from the Greek bombux meaning “silk,” and the Latin cilla, meaning “tail.” The name cedrorum is Latin for “of the cedars.”

Cedar waxwings are attracted to the sound of running water because they enjoy bathing in and drinking from shallow creeks. In urban or suburban habitats, cedar waxwings prefer parks with well-spaced trees, golf courses and cemeteries. Cedar waxwings are found in our area all year long. In fact, their numbers may be increasing in suburban areas as people plant more fruit trees and berry bushes. To attract these entertaining and social birds to your yard, the Cornell Lab of Ornithology recommends, plant native trees and shrubs that bear small fruit such as dogwood, serviceberry, cedar, juniper, hawthorn or winterberry. 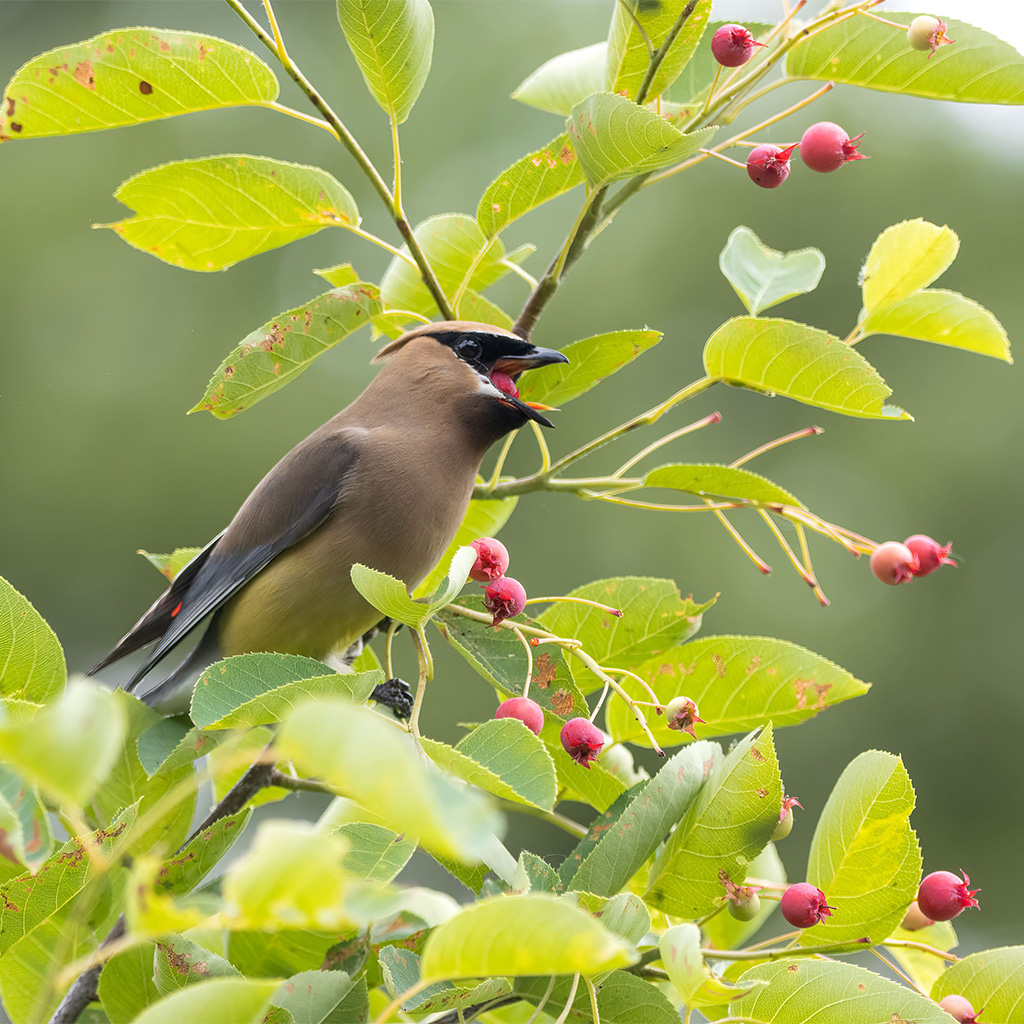 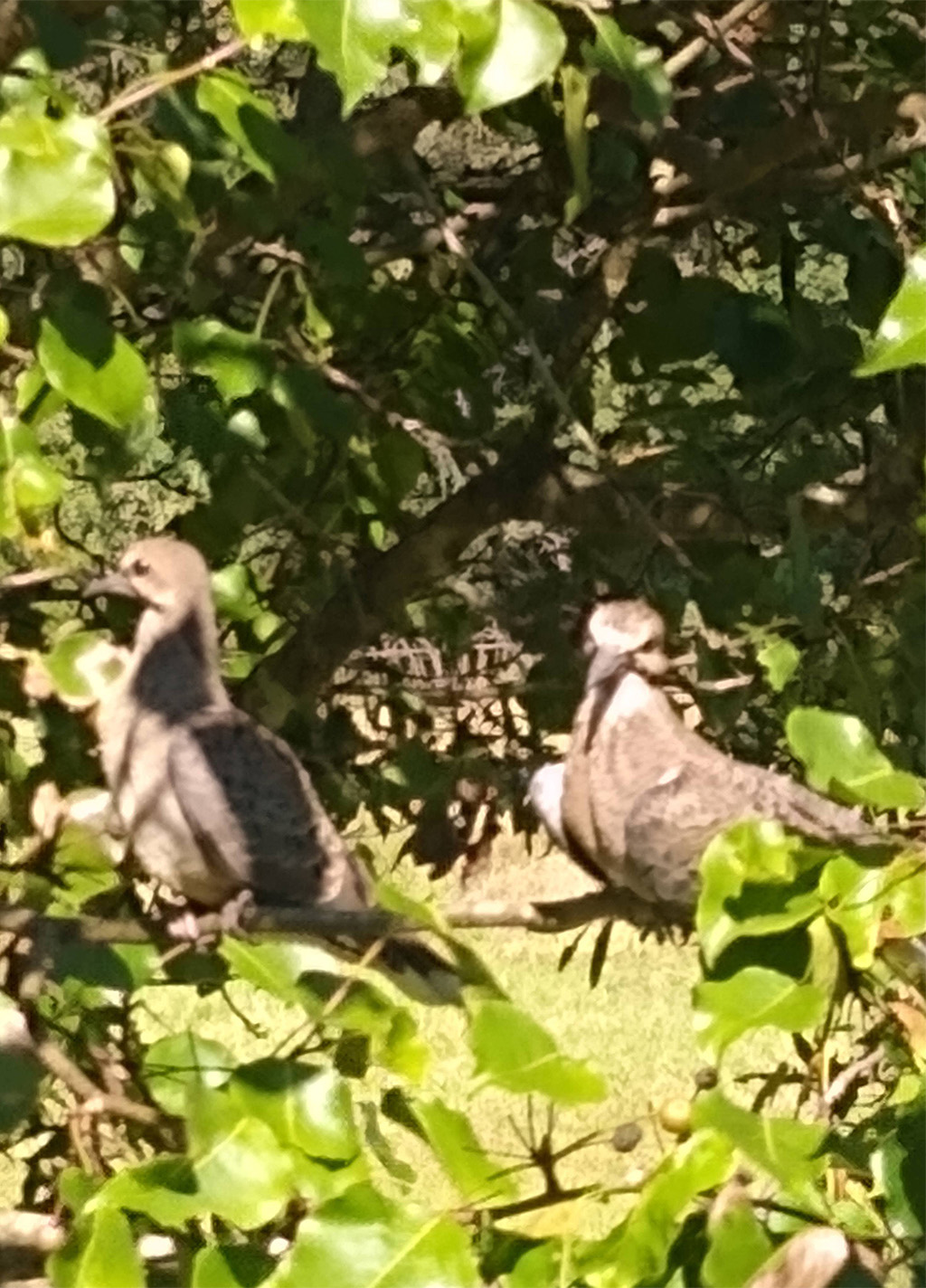 Reader Matt Draper sends us this photo of mourning doves.