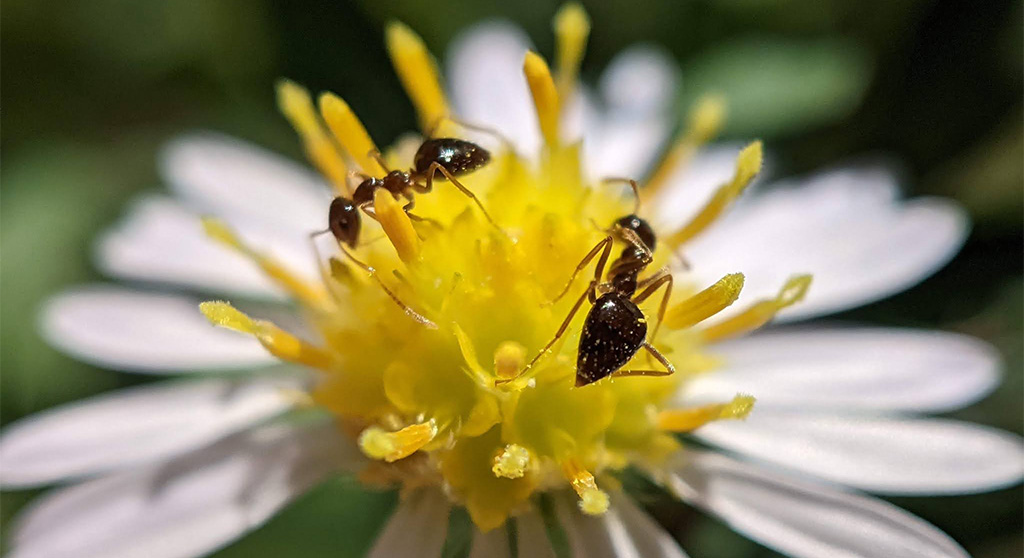 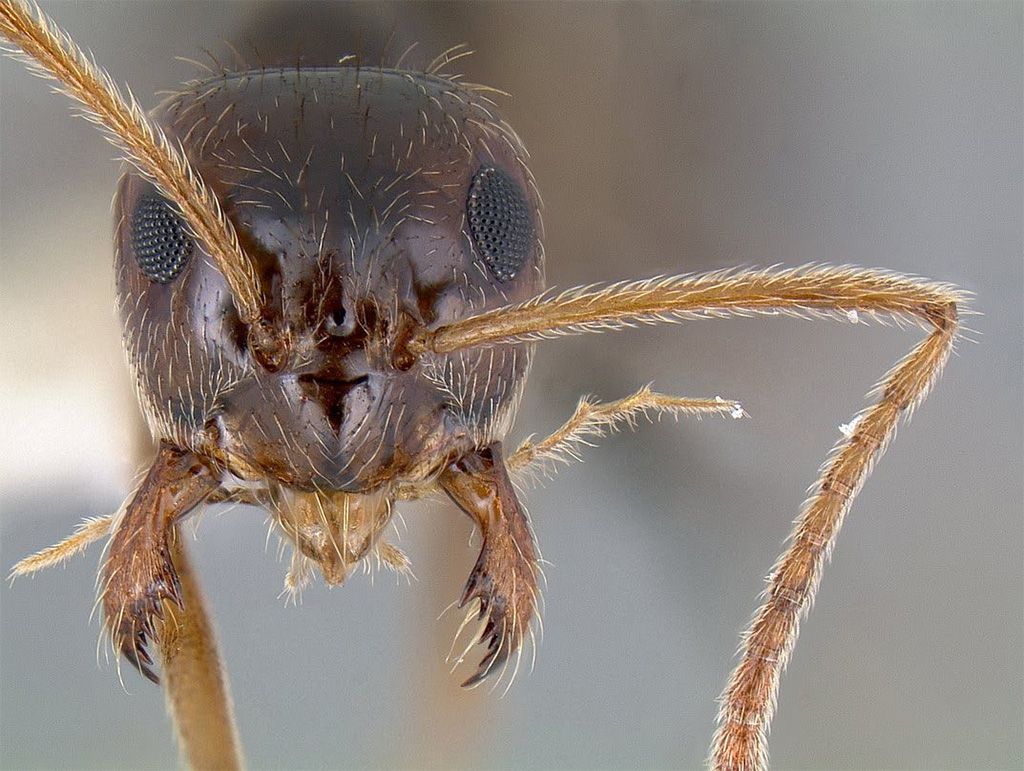 Close-up view of the head of an American winter ant. (Photo: Michael Branstetter/antweb.org via Wikimedia Commons)

The American winter ant (Prenolepis imparis) isn’t called that for nothing. It prefers lower temperatures (from 35 degrees Fahrenheit to 60 degrees Fahrenheit), and workers forage outside the nest only during the fall, winter and early spring when most other ants are dormant. Winter ants consume only liquids, especially the sugary liquid waste of aphids, the nectar of flowers, the secretions of oak-galls, sap and rotting fruit. In the winter, they often drink from dead earthworms that were driven to the surface by rain.

During the summer, the winter ant colony enters a dormant state, and its foragers come in to live belowground. The queens (there are up to nine per colony) lay eggs in late August or September, and the workers care for the brood. In the fall, new workers, called storage ants, emerge and spend the next 10 months inside the colony. As the weather cools, the older workers forage outside the nest and return with liquid food. These foragers regurgitate the liquid food to the new, young storage ants. The storage ants have flexible bodies and their abdomens swell to hold more than twice their body weight in fats and nutrients. These fat storage ants secrete a nutritious fatty liquid that is the main food that the entire colony feeds on during the summer, and that the larva and winged ants feed on the rest of the year. The following year, the storage ants have exhausted their excess weight and become foragers. 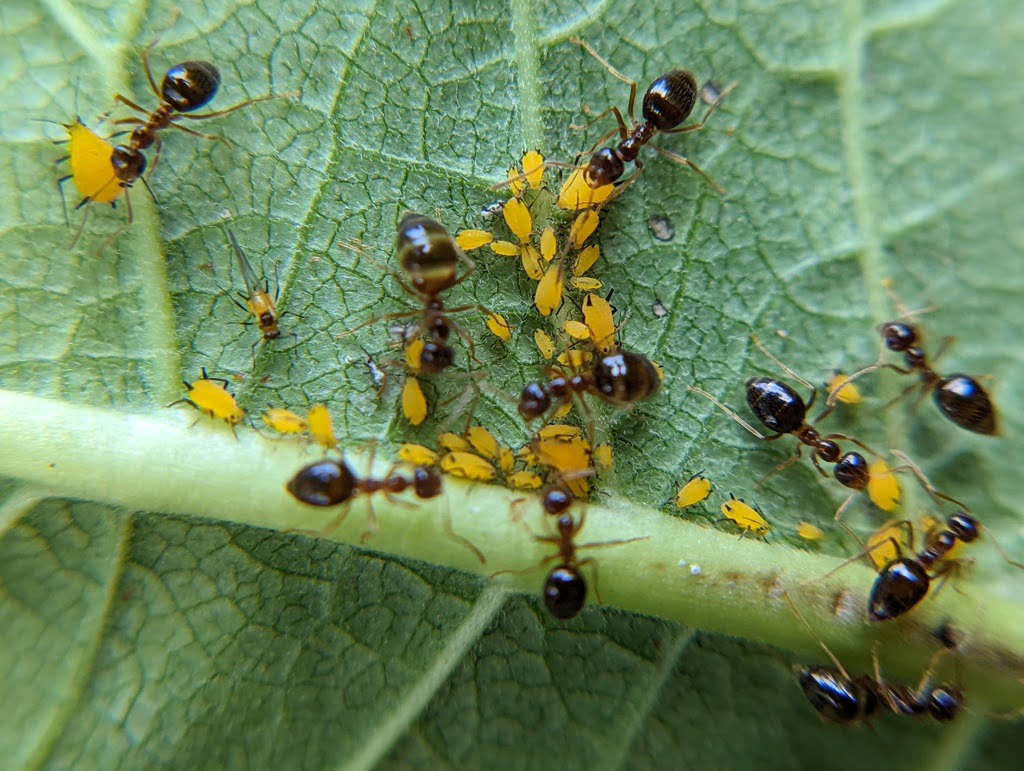 Winter ants, like all, begin as eggs. Each egg hatches into a maggotlike larva covered in hairs. The fat storage ants feed the larvae, who eat, eat, eat and eat. The larvae grow rapidly, molting frequently. When one is big enough, it metamorphoses into a silk-encased pupa, or cocoon. Finally, an adult ant emerges. These adults are either female workers, male reproductive ants or queens. 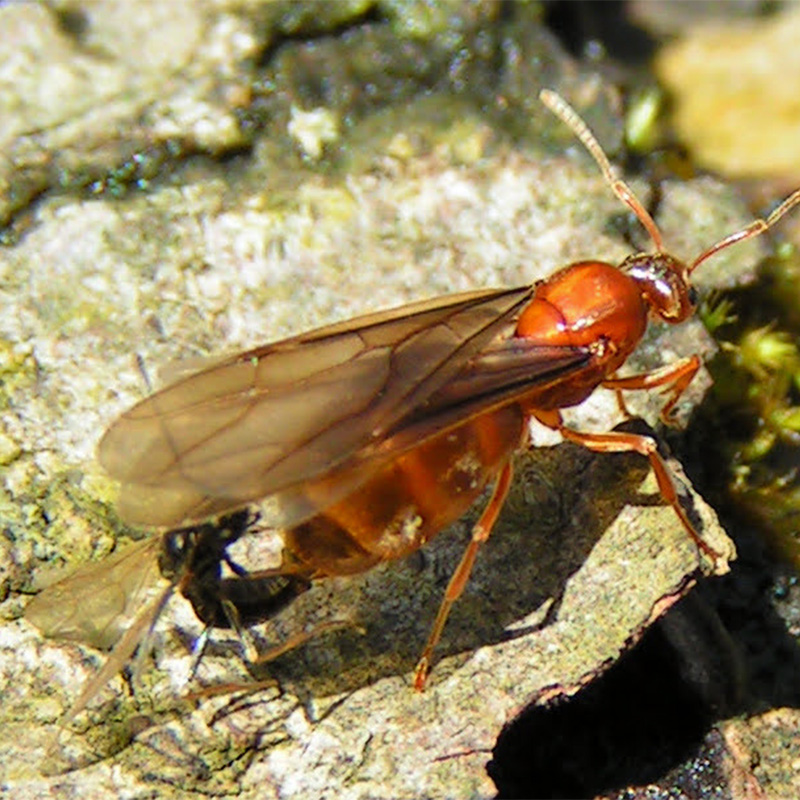 American winter ants mating. The female queen is much larger than the black male, which gives rise to the ant’s name Imparis, which means “unequal.” (Photo: Jacy Lucier via Wikimedia Commons) 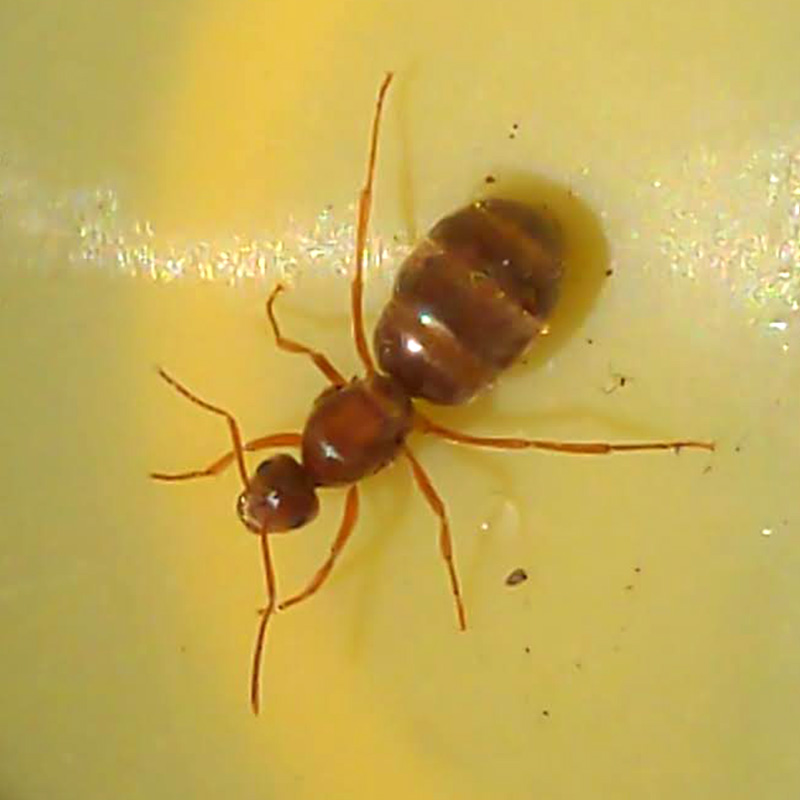 The brownish queens are winged females who, as larvae, were fed a great deal and grew very big. They lay all the eggs in the nest. The brownish workers are unwinged females who, as larvae, were fed less food than the queens. These take care of the brood, build and maintain the nest and forage for food. The black male ants, like the queen, have wings. Winged winter ants wait out the winter in the colony. On the first warm spring days in March or April, swarms of males and new queens fly away from the colony to mate. The males live for only a few weeks in the spring and do not return to help with the colony. The fertilized females start colonies – but most queens are not successful at starting colonies, and very few ever even mate; birds and other predators eat most. The few fertilized queens that survive scrape off their wings and begin the hunt for a satisfactory place to dig a nest. Ant colonies produce large numbers of queens in the hopes that one or two will survive to start a new colony. Queens can live for 10 or more years. The workers live for a couple of years and the males, once they leave the nest, for a week or two. Imparis means “unequal,” and winter ants (Prenolepis imparis) are so named because of the size difference between the large queen and the much-smaller male. 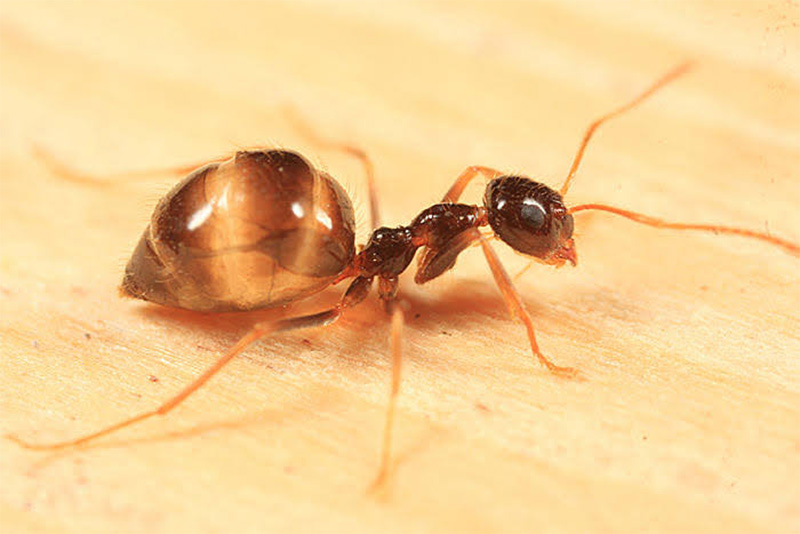 An American winter “storage” ant in Stow has an extended abdomen that can hold more than twice its body weight in fats. (Photo: Tom Murray via Antwiki)

Winter ants build nests that extend deep into the ground, with main shafts extending vertically as far as 11 feet. Chambers intersect the main shaft, with greater numbers of ants living in the deeper chambers, probably because the deeper chambers are cooler. Fat storage ants stay here. During hot weather, winter ants seal their nest and stay far below ground in the deepest and coolest chambers. The colonies usually have a few thousand worker ants, but older, well-established colonies may have more than 10,000 workers. 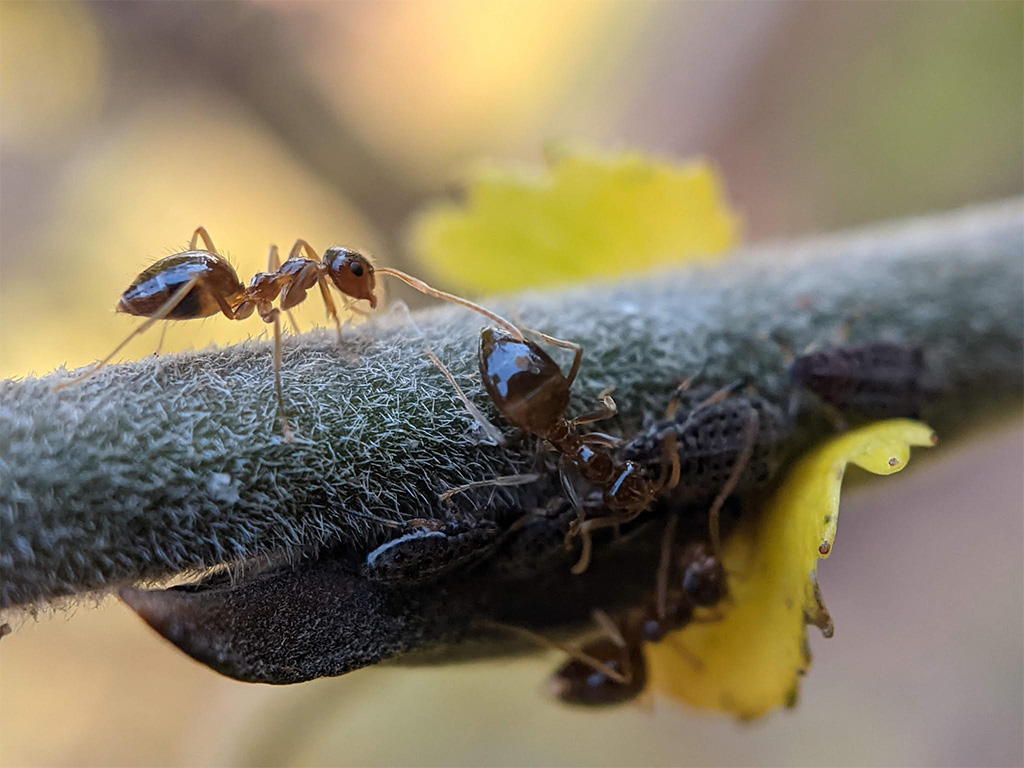 American winter ants in Prospect Hill, Somerville. When viewed from the side, the body of a winter ant displays an hourglass shape. (Photo: Claire O’Neill/earthwiseaware.org)

William Morton Wheeler wrote in 1930 about the feeding habits of winter ants observed at the Arnold Arboretum in Boston.

The workers were observed to come out onto the surface of the soil nearly every week throughout the winter … They are at their best during or after cold rains, or a cold, humid period with overcast skies. They were most active outdoors between 35° and 55° F. all winter, but they occasionally crawled over the soil below 30° F. or above 60° F … For about five months these ants lived on dead or dying earthworms driven above ground by rains … I often saw [winter ants] leave an earthworm that had been dried up by the sun and return to it as soon as another rain had soaked it up again.

This species is found throughout North America and is one of the few native ants that can compete with invasive ant species because it forages when invasive species are inactive. Winter ants also produce abdominal secretions that are lethal to invasive ants. 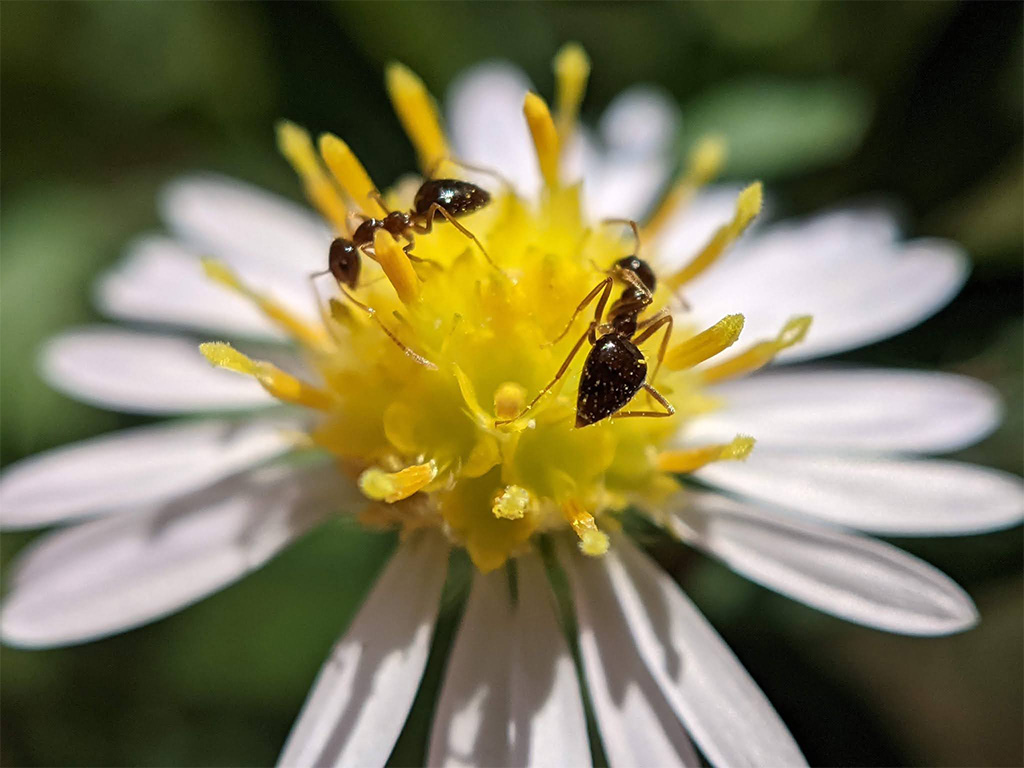 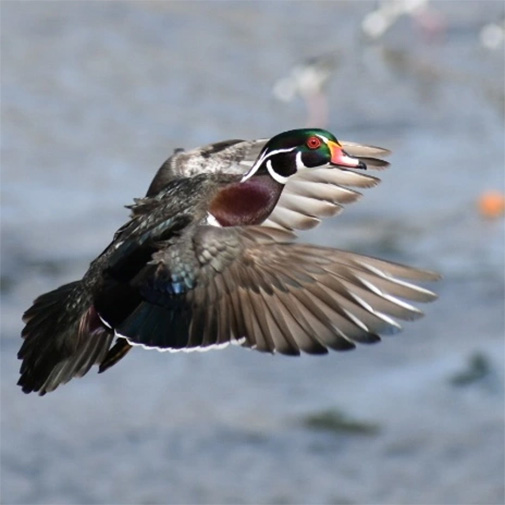 Reader Jane Roxanne Beamon sends us this photo of a wood duck.