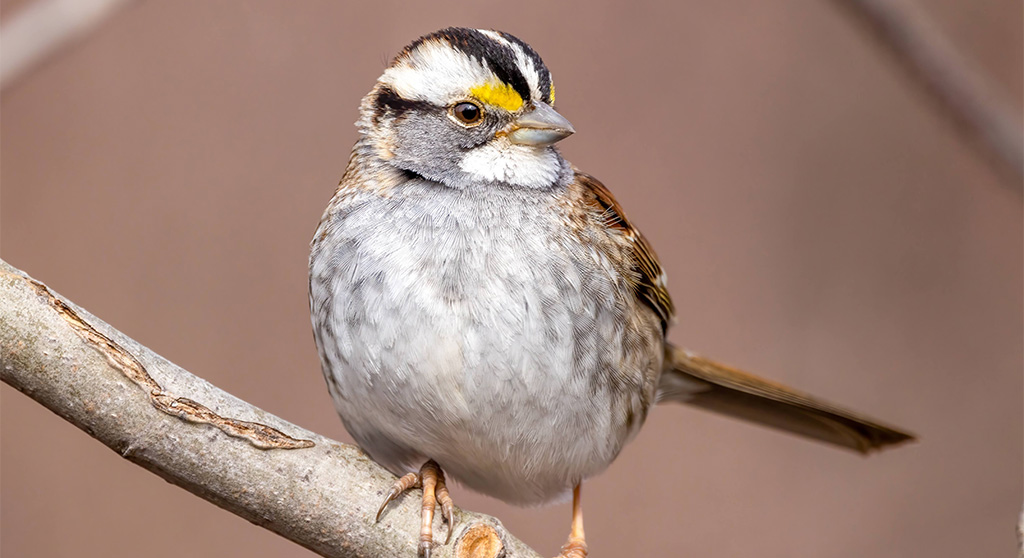 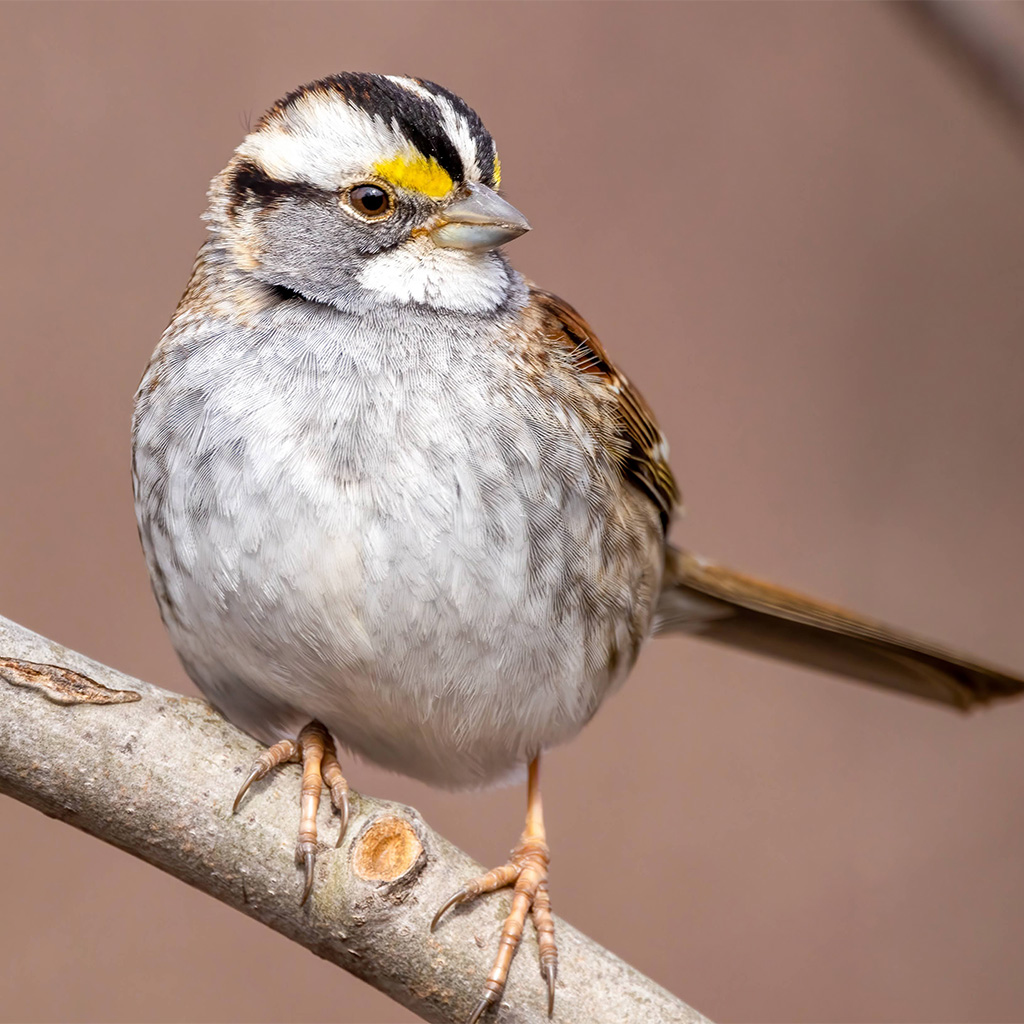 White-throated sparrows are easy to identify because they have two bright yellow spots (called lores) behind the bill and above the eye. (Photo: Richard George)

White-throated sparrows (Zonotrichia albicollis) come in two color variations, or morphs. One color morph has white stripes on the head, and the other has tan. These variations not only look different, but behave in completely different ways.

Because of differences in one of their chromosomes, the white-striped birds have higher testosterone levels, are aggressive and promiscuous, and provide little parental care. The white-striped males sing to establish a territory and attract mates. The tan-striped birds, on the other hand, pay close attention to their offspring and are monogamous; the males do not sing much, but the females are excellent foragers and providers for the chicks. Ninety-five percent of the time, these birds mate with a partner of the other color morph, so the two morphs continue to exist in the same proportions – that is, each color morph makes up 50 percent of the population. 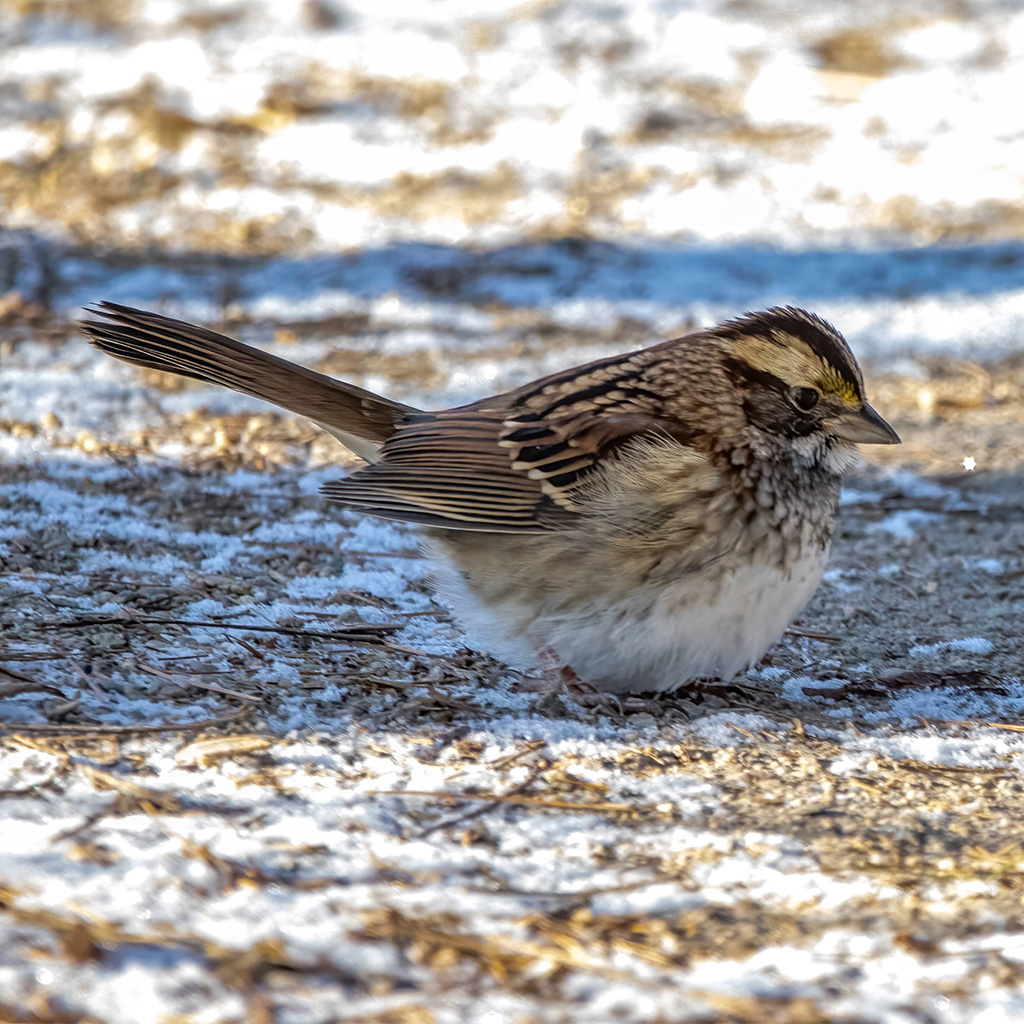 Studies have shown that females of both colors are most attracted to the tan, monogamous, attentive males. But the white morph females are more aggressive, and they pair quickly with the tan males. Males of both colors are more attracted to the white females, but as already mentioned, these females pair quickly with the tan males. The unpaired white males and tan females have little choice but to form mating pairs with each other. Ninety-five percent of the time, the pairs match up this way. 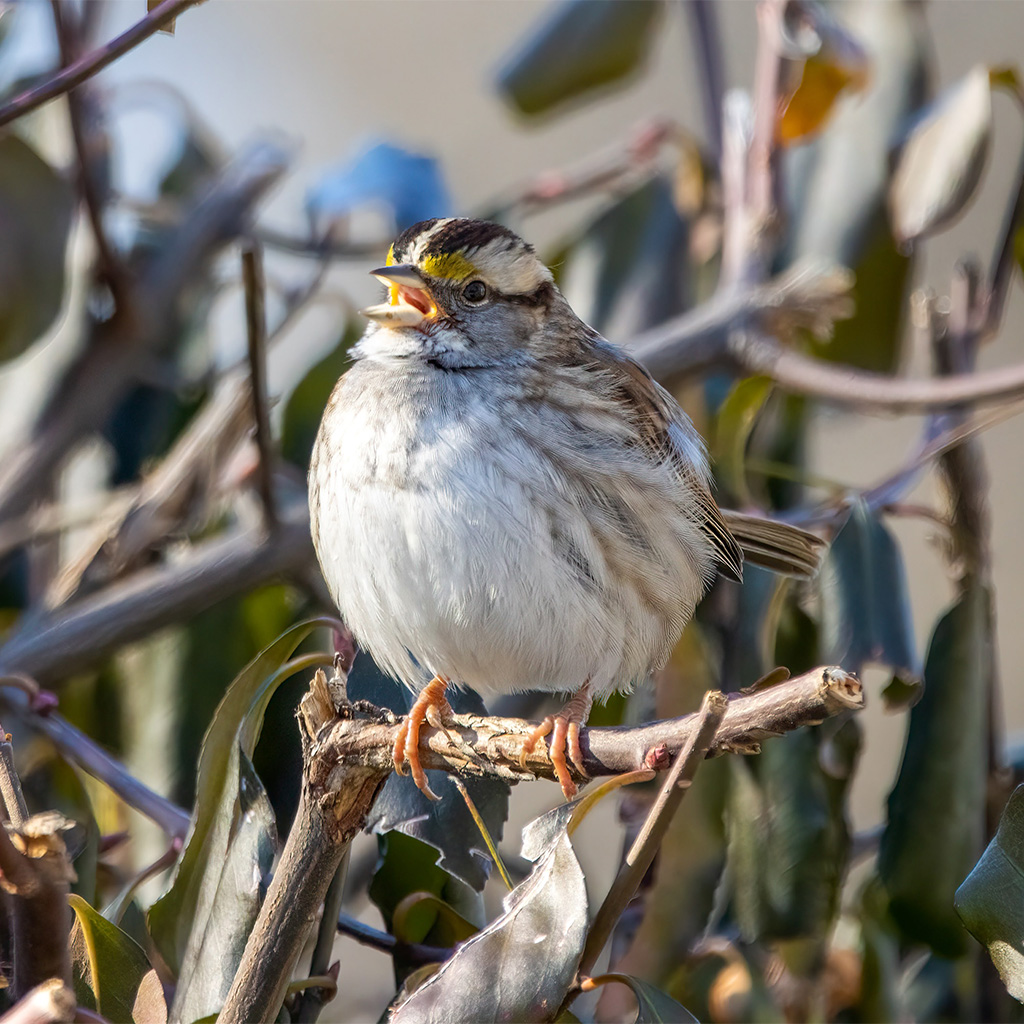 White morphs do most of the singing, which is associated with territorialism and aggressive behavior. (Photo: Richard George)

Occasionally, there are tan-tan pairs or white-white pairs, but this is bad news for the offspring. The aggressive white-white pairs don’t feed their young enough because they fight constantly with each other and are not good foragers. There isn’t much data on tan-tan pairs, but they are not successful either, probably because, although they are good providers, they do not protect the nest against intruders.

Tan morph males guard their partners from extra mates who may intrude on the territory, and extra-pair offspring are rare for tan male/white female pairs. The same is not true for white male/tan female pairs, where more than half of their broods may be the result of extra-pair fertilizations. White males find additional mates through song and by intruding into territories of other white males, who are also busy philandering and don’t guard their females. 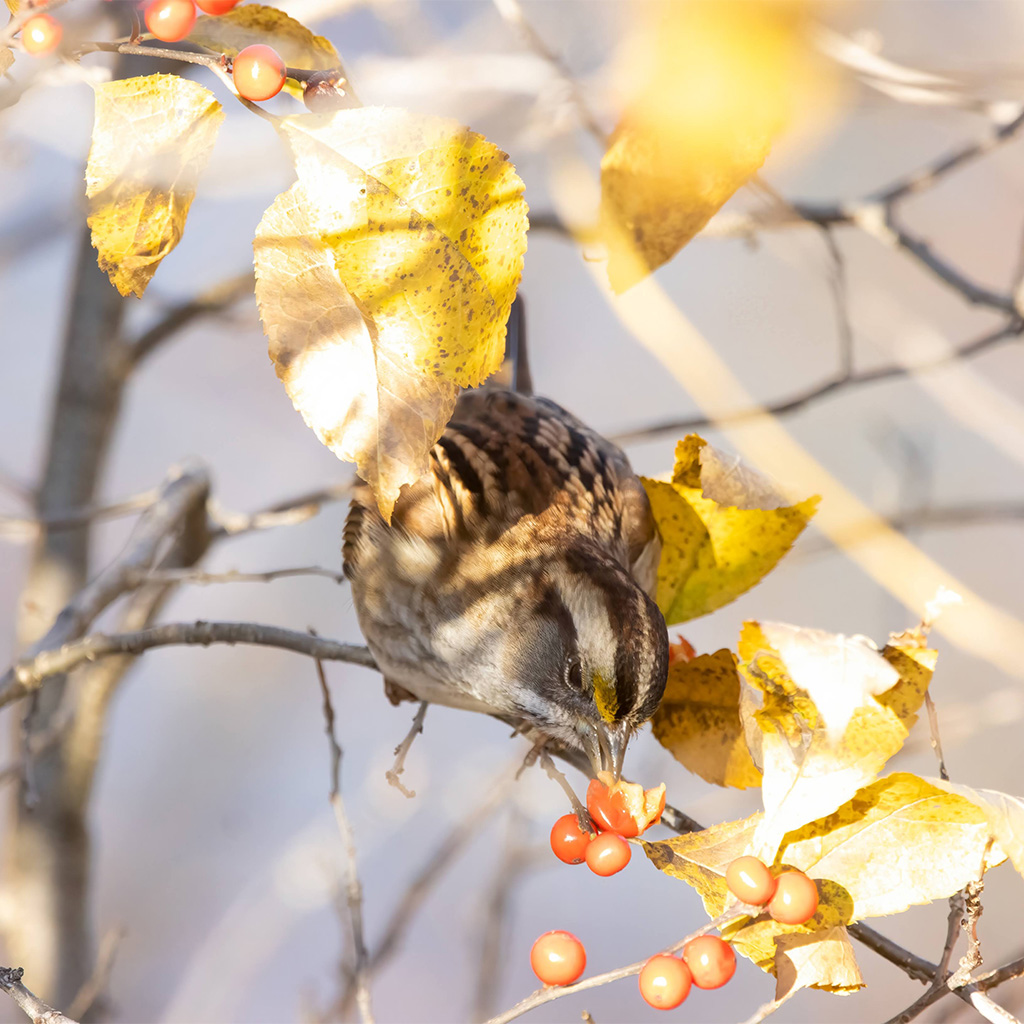 Studies have shown that some white-morph females place their eggs in other nests so these eggs can be incubated and raised by a foster mom. Among tan male/white female pairs, 12.5 percent of eggs may be from another female. No such eggs were identified in white male/tan female pairs. This may be because tan females stay so close to their nests that extra eggs cannot be slipped in.

White-throated sparrows essentially have four sexes, rather than two as in most species. This is highly unusual, as it means that a white male, for example, mates only with a tan female, which makes up one-quarter of the total sparrow population. From an evolutionary standpoint, this decreases the chances of finding a mate. 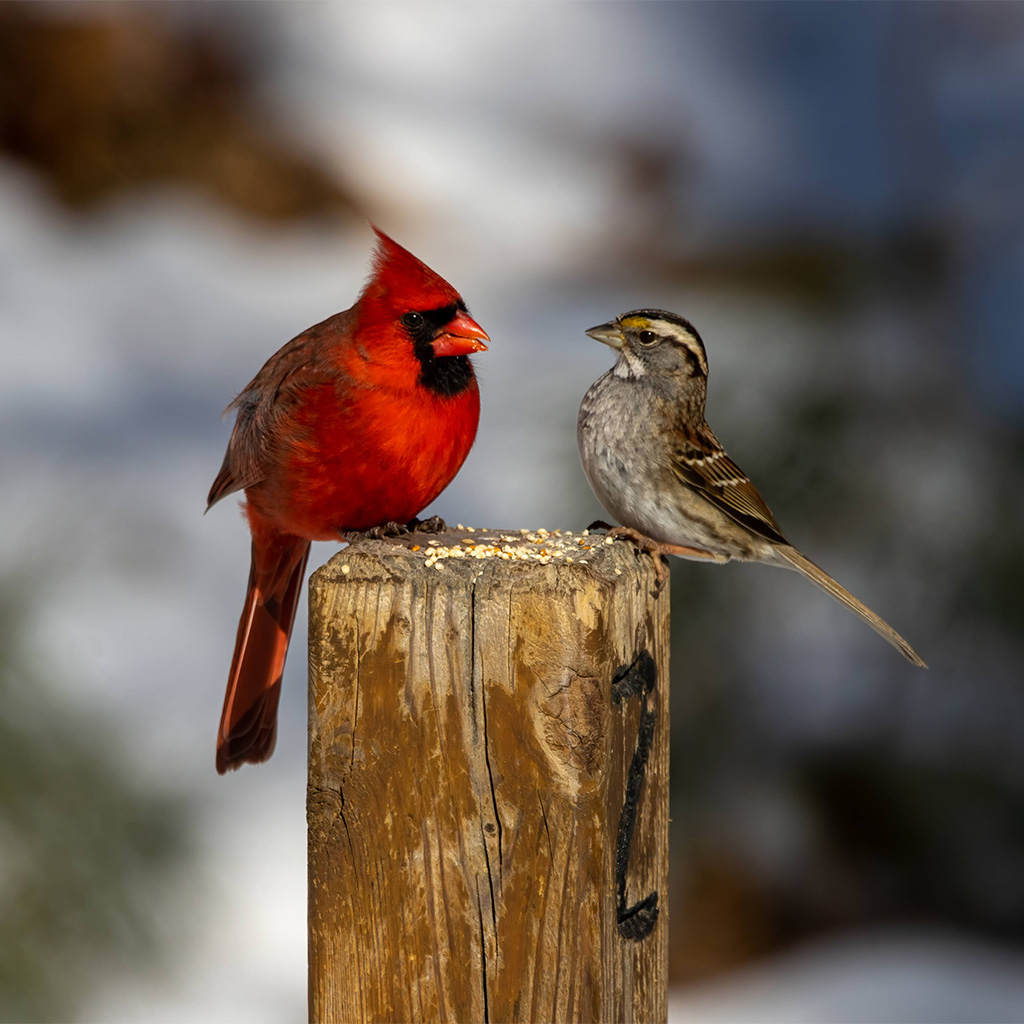 White-throated sparrows will intermingle with cardinals and other birds near food sources, especially in the winter. (Photo: Richard George)

White-throated sparrows often forage on the ground. They even build their nests on the ground in areas with dense cover. (Photo: Ann Schlesinger)

White-throated sparrows like bushy areas with undergrowth to hide in. They eat seeds, insects and berries and they will eat the seeds beneath a bird feeder, especially if the feeder is near a thicket on the ground. They sing a song, which people in New England describe as sounding like “Poor Sam Peabody, Peabody, Peabody” while people in Canada describe the sound as “Oh sweet Canada, Canada, Canada.” Over the past 20 years, white-throated sparrows have passed a new song variant from western Canada to the east. The new song variant, instead of having three repeating syllables, Peabody, Peabody, Peabody, has two, Cherry, Cherry, Cherry. Only a thin ribbon of birds in the east still sing the old Peabody version of the song, and it seems the west coast birds have already invented a new variation.

The white-throated sparrow is a fascinating bird with unique characteristics not found in other bird species. Their behavior raises many questions: Do opposites make better mates? Can we draw conclusions about human behavior from sparrow behavior? How much of behavior is genetic? I do not have answers to these questions, so I will leave them for you to ponder in the new year. 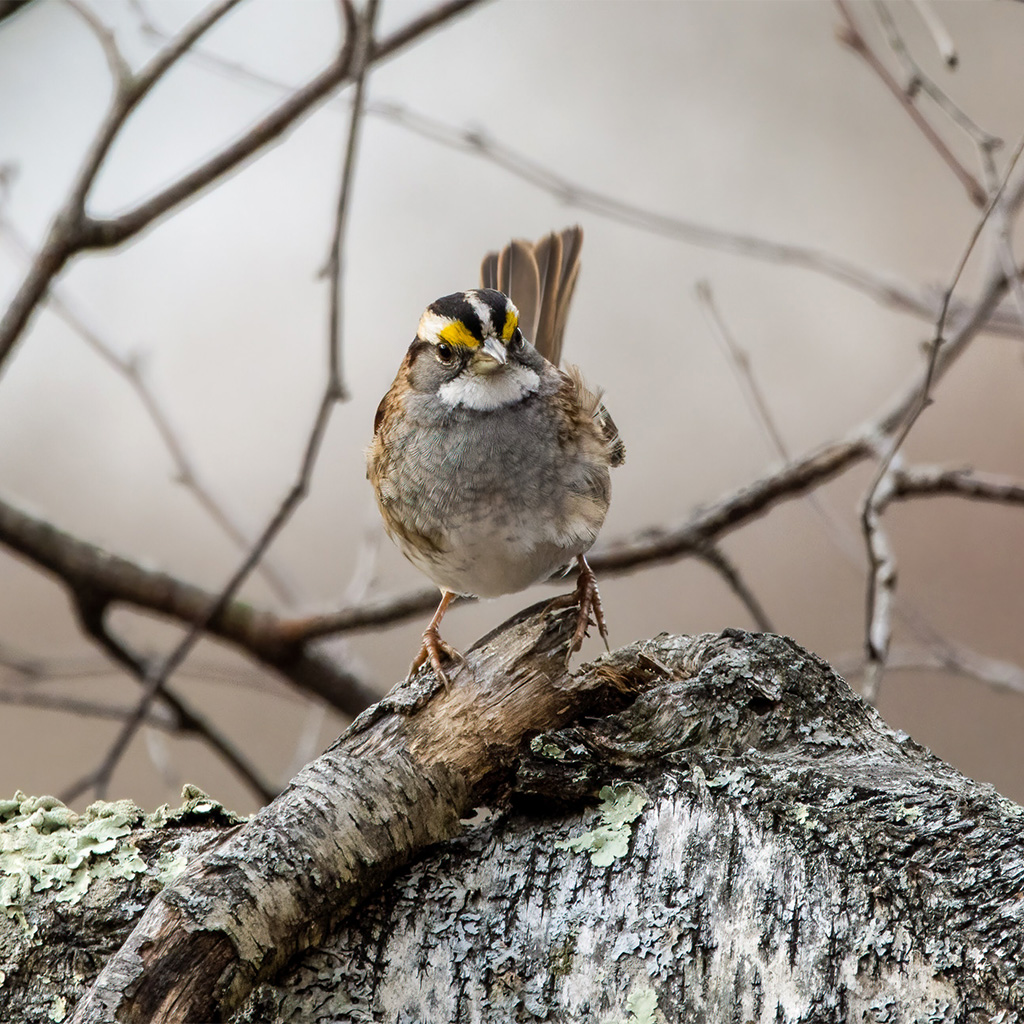 With help, common loons are becoming more so, but that doesn’t make their flying less awkward