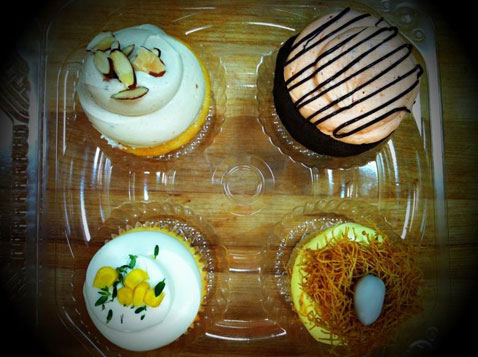 is offering a “Cupcake Wars” four-pack that people can use to decide a favorite, which the chefs promise will stay on the menu through September. (Photo: Crema Cafe)

The top prize — $10,000 and a chance to cater the baby shower for Kristin Cavallari, which was held at the reality TV star’s Hollywood home — went to the Sweet Spot Bake Shoppe, of Chester, N.J.

The traditional weird ingredient featured in the first round of the competition was baby food, according to the Game Show Kingdom blog, with Crema Cafe’s Meghan Coleman and Gwen Rogers baking up a concoctions of yogurt with fresh peaches, sweet corn and thyme roux-based buttercream and a toasted oats cereal caramel. (The winners, Cheryl Burger and Stacey Filipow, baked banana with a whipped cream yogurt filling, sweet potato cream cheese frosting and a white chocolate baby foot mold.)

One of the four contestants was disqualified for inadvertently leaving out ingredients, blogger Bobby McBride said.

In the next round, Coleman and Rogers baked cupcakes of devil’s food with strawberry buttercream, a chocolate basil ganache filling and silver-accented little black sheep; almond with Earl Grey buttercream and a fondant star garnish; and pistachio chiffon with saffron rosewater buttercream, a cardamom-spiced phyllo dough nest with a white chocolate egg. With another contestant eliminated, Crema Cafe and the Sweet Spot Bake Shoppe went into a final round, with the Shoppe’s “four square tiers with multicolored baby block and and umbrella with crystal raindrops” edging out the Harvard Square cafe’s “‘baby room’ table with cupcake shelves,” the blog said.

Crema Cafe posted its audition video to the Food Network show here, and the shop is offering a “Cupcake Wars” four-pack that people can use to decide a favorite, which the chefs promise will stay on the menu through September.