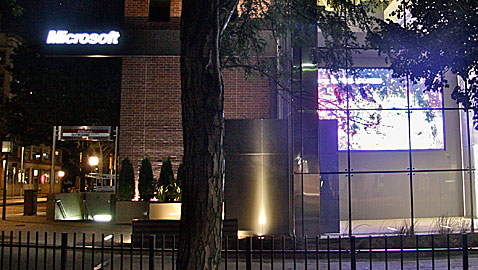 The issue of corporate signs was explosive in Cambridge two years ago, and may explode again Wednesday.

Terry Ragon, owner and chief executive of the health care software maker Intersystems, spent $441,373 in late 2010 getting names on petitions and won a fight against changes to a city sign law that would allow corporate names to go atop office buildings. Many saw the campaign as a one-man stand against Microsoft.

But Kendall Square operates under different rules, and in Kendall Square — with the name “Microsoft” prominently at the top of 1 Cambridge Center, on a blade sign projecting out several feet over Main Street from the same building and now on an illuminated billboard visible from within a newly renovated lobby — the outcome looks a little different. Click on the photo above for a slideshow of the Microsoft signs.

“I was amazed at what I saw coming into Kendall Square from the Longfellow Bridge,” East Cambridge resident Mark Jaquith said, describing his discovery during a drive Sunday: “a huge billboard made up of 25 panels of plasma screen” measuring about 20 feet by 12 feet.

“Terry Ragon was right when he said if we don’t watch out our city will look like Las Vegas. It has begun,” Jaquith said, referring to the plasma display as “a monstrosity.”

The Cambridge Redevelopment Authority has oversight of signs in Kendall Square, but was lacking a board for some two years before four city members were sworn inand a state member newly activated in early April. It was in those two years that the Microsoft plans were put in place with landlord Boston Properties and the authority’s executive director, Joseph Tulimieri — the same team and timeframe behind the building proposed to connect Google offices by taking away 40 percent of a rooftop garden from public use.

The newly reconstituted board has asked for a legal review of authority actions over those years and has been looking into sign approval standards and processes as well. Residents complained about the authority’s handling of sign approval at the new board’s first meeting.

The Microsoft blade sign jutting out onto Main Street and challenging the Kendall Square T stop sign for prominence — “Welcome to Microsoft Square!” recent City Council candidate Tom Stohlman quipped last month — was not really a surprise. Activist James Williamson noted that the blade sign appeared accurately in a rendering by Elkus Manfredi Architects in a Kendall Square study that was posted Jan. 19 on the website of the city’s Community Development Department.

Ragon’s battle kept the Microsoft name from going atop the building Intersystems and Microsoft share at 1 Memorial Drive, but the Microsoft sign atop 1 Cambridge Center went up in January, about a year after that victory and a half-mile away because, as Tulimieri told the Cambridge Chronicle’s Scott Wachtler at the time, “The Kendall Square Urban Renewal area is in a separate unique zoning district … There was a submission by Microsoft and there was a review conducted by an architect on call and the authority’s staff did the review and the sign was approved. This took place about a month ago.”

One Cambridge Center is in an MXD (mixed) district, excluding it from a review of signs by the normal city agencies, Tulimieri said. The redevelopment authority has the right to approve signs on building in this area … There are 19 buildings in the MXD area, some already have signs on them including Biogen Idec, Whitehead Institute for Biomedical Research and the Marriott and Hyatt hotels.

Especially with the Microsoft blade sign’s installation last month and the surprise appearance of the plasma screen last weekend, neighborhood activists such as Jaquith are saying the companies raced to install the signs before the board’s study halted them.

The meeting is scheduled for 5:30 p.m. Wednesday in the third-floor Endeavor Room at the Boston Marriott Cambridge, 50 Broadway, Kendall Square. That address is also known as 2 Cambridge Center.