Microsoft sign went up in defiance of order, officials say, but it’s not coming down 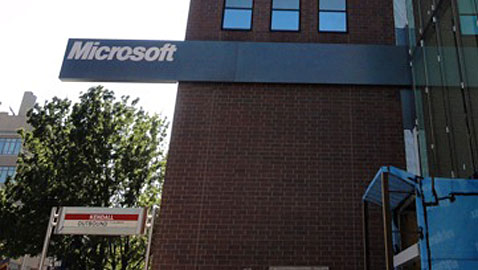 Microsoft sign went up in defiance of order, officials say, but it’s not coming down

A Microsoft blade sign extends over a sign for a red line T stop in Kendall Square. The Microsoft sign won’t be coming down despite the fact its installation was a mistake, officials said Wednesday. (Photo: Tom Stohlman)

Although their order was that a “blade” sign for Microsoft offices not be installed, Cambridge Redevelopment Authority members on Wednesday laughed off the fact that executive director Joseph F. Tulimieri let it happen — even as they imposed a firm moratorium on sign installation in Kendall Square and said they’d be reviewing all sign applications for the foreseeable future.

“I went back and listened to the tape from the meeting, and it is true that Mr. Mullan said in the meeting, ‘So the Microsoft sign won’t go up,’” said the authority’s chairwoman, Kathleen Born, referring to a statement to Tulimieri by counsel Jeffrey Mullan on July 18. The sign went up within the next two days.

“How’d that work out,” Mullan quipped.

“Yeah,” came a quiet chorus of people at Wednesday’s meeting of the authority in Kendall Square.

Then there was laughter.

New attention was drawn to the blade sign jutting out onto Main Street at 1 Cambridge Center by an even more recent sign: the giant, illuminated plasma-screen billboard turned on over the weekend within the building’s renovated lobby, revealed by a glass wall looking out onto Point Park. Born and Mullan made it clear they believed the branding— there’s another Microsoft sign at the top of the tower — was legal as approved by Tulimieri, although the board has been at work on a sign policy for Kendall Square almost since taking their seats May 21.

Born said Tulimieri had approved the sign before then. “Before the board was reconstituted, Mr. Tulimieri had the executive power to approve that sign. Whether I like it or whether you like it is another matter,” she said, “but it would be difficult to have it taken down.”

(Mullan has admitted Tulimieri has never had such executive power under the authority’s bylaws.)

While member Conrad Crawford said it was within the board’s power to have the blade sign removed, he wasn’t forcing the issue, especially when Mullan warned the act would be “not without consequence and costs.”

“As the chair said, it’s not illegal that it went up [even though] there’s lots of people who aren’t happy about it. Taking signs down rather than prohibiting them from coming up are two very different things,” Mullan said.

There were First Amendment concerns with taking down signs, Crawford acknowledged.

It is a time-honored practice among developers, politicians and businesses in Cambridge to build fast or push hard for quick approval of a plan and count on officials not looking back. The Boston Properties plan for a building connecting two Google offices is the gold standard: It was introduced to the City Council with an unexamined claim of urgency; the council has shrugged off information that it voted in March on a plan put together by Tulimieri alone but presented as being from a nonexistent full board; and the newly reconstituted authority has plugged away at the same plan, which takes 40 percent of a rooftop garden from public use, with the justification that no matter how it got there, it was approved by the council.

In the case of the Microsoft blade sign, Born said she went to Tulimieri when she spotted it and asked when it was approved. “And it was signed off on by Mr. Tulimieri before the first meeting of the reconstituted board. I wanted to be sure it didn’t happen on our watch,” she said. “What I regret is that at the last meeting some of the members of the board and of the public had the impression the sign was going to be delayed.”

Board member Margaret Drury said it would still be some time before a formal sign policy was in place, and that some signs might be affected by putting a hold on approval until it was. Boston Private Bank, at 1 Cambridge Center, was mentioned as a business forced to wait for its signs, despite them being approved as the Microsoft blade sign had been.

After much discussion on it, Tulimieri looked at Mullan and vowed, “Nothing will happen unless you instruct me right now to release the Boston Private Bank sign,” as well as promising the board he would bring bank photos of the propose signs at the September meeting for approval.

“What I would like to avoid is having more surprises,” Born said.