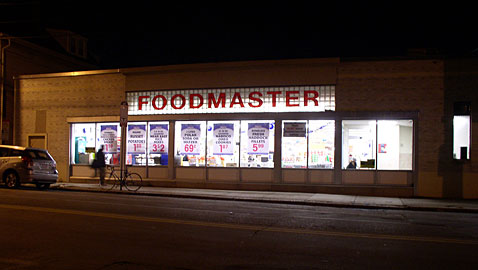 The Whole Foods grocery store chain was reported to be in negotiation for six of 10 Johnnie’s Foodmasters sites, including the one on Beacon Street serving Inman Square, but a manager there says the store may be spared. (Photo: Josh Michtom)

Workers at the Johnnie’s Foodmaster grocery stores serving Inman Square and the westernmost parts of North Cambridge say they are not being bought and turned into Whole Foods, according to a report in The Somerville Journal.

The Austin, Texas-based, 331-store Whole Foods chain — which absorbed chains such as Wild Oats and Bread & Circus in years past — was in early negotiations for six of the 10 Johnnie’s Foodmasters in Arlington, Brookline, Charlestown, Melrose, South Weymouth and on Beacon Street in Somerville, which serves Inman Square, The Boston Globe reported. (The 105 Alewife Brook Parkway store was not mentioned.)

The family-owned Johnnie’s Foodmaster chain was started in East Cambridge in 1947 by John DeJesus Sr. It has a reputation for lower prices, while Whole Foods is often bitingly referred to as “Whole Paycheck” and in the position of defending its prices. (It is also sometimes in the position of defending its chief executive, John Mackey, who stepped down as chairman after bashing health care reform in 2009.)

All in all, the Journal’s Auditi Guha finds workers and shoppers at the 45 Beacon St. Johnnie’s Foodmaster not too happy at the prospect of soon finding themselves in a Whole Foods. Shopper Ralph DeVitto is quoted:

I’d hate to see a family-owned store go to a chain like that. I don’t like the idea at all. It’s a neighborhood store, it’s been here all my life and I know the staff. They’re practically my friends, short of being on my Christmas card list.

He may be spared, according to Guha’s reporting. While top executives at the chains and at city hall weren’t available or were uninformed, she also spoke with Bob Iannaconne, manager at the Beacon Street Foodmaster. “I was told the story was false,” Iannaconne said to the Journal.