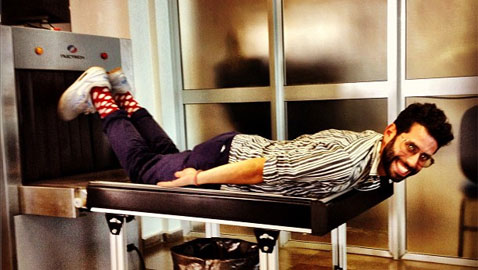 Eli Goldstein, of the DJ duo Soul Clap, jokes around in the airport this weekend on his way to performing a Saturday set in Rio. This Instagram photo, posted by Soul Clap, was labeled “Rio, here we come!”

That Soul Clap is back at Phoenix Landing on Wednesday is amazing for a number of reasons: First, it’s Soul Clap. Second, this just happens to be a stop-off between playing in Rio on Saturday and Ibiza next Monday. Third, they weren’t even scheduled — the Cambridge DJ duo is just filling in for Miguel Campbell.

The Together festival twitterfeed announced the show Wednesday, and the bar confirmed it.

“Rest assured, the funk is intact,” was the message from the bar’s Facebook page.

Campbell, of Leeds, England, was supposed to be making his Boston debut at the Wednesday Re:Set night. A manager at the Central Square said she wasn’t sure why Campbell wasn’t able to make it.

Soul Clap — Eli Goldstein, 29, the Cambridge-born member, and Charles Levine, 30, of Brookline — honed their skills at MIT tunnel parties and regular performances at Phoenix Landing and the Middlesex Lounge and now travels the world performing and teaching. Their hometown sets are always a big deal, and with 48 people confirmed via Facebook as of Sunday, the Wednesday Re:Set is sure to have even longer lines and a more crowded dance floor than usual.

The set is scheduled to run from 10 p.m. to 1 a.m. at Phoenix Landing, 512 Massachusetts Ave., Central Square.