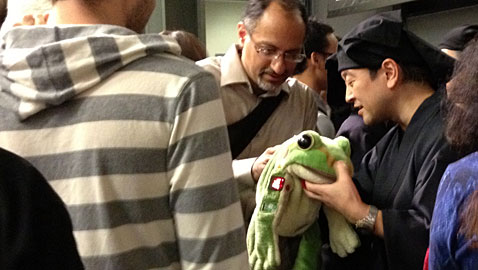 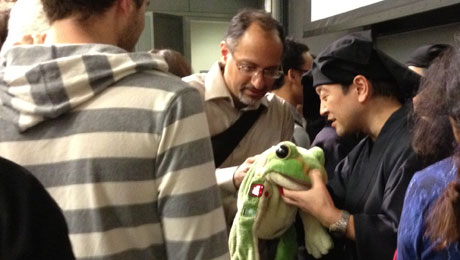 A member of Japan’s Keromin Orchestra shows off his instrument — an electronic frog — after the Ig Informal Lectures on Saturday at the Massachusetts Institute of Technology. (Photo: Marc Levy)

Since a one-minute Ig Nobel Prize acceptance speech doesn’t always allow enough time to impart the full genius of the scientific advances being honored, the prize committee (mainly Marc Abrahams, editor of the Annals of Improbable Research journal and author of the new “This Is Improbable”) added The Ig Informal Lectures to the itinerary.

The lectures give prize winners a whole five minutes to talk.

The enforcers of the one-minute rule during Thursday’s ceremonies in Harvard’s Sanders Theatre were, as they have been in past years, 8-year-old girls; in the hallowed halls of the Massachusetts Institute, the enforcer of the five-minute rule for Saturday’s lectures was the five-member Keromin Orchestra, which traveled from Japan to show off its unique musical instruments. (The Keromin is a frog puppet with an electronic voice that changes in pitch depending on how wide its mouth is open.) To ensure maximum solemnity, the orchestra marked off every minute of a five-minute speech rather than just the end of the available time.

But there were plenty of other funny and cool moments during the free lectures about “achievements that first make people laugh, and then make them think.” Here are five: 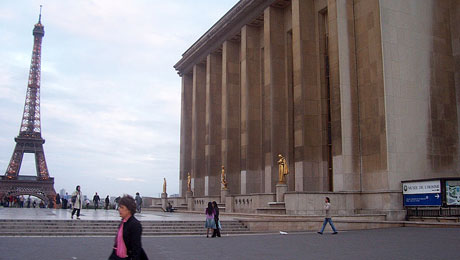 1. Why “Leaning to the Left Makes the Eiffel Tower Seem Smaller”

It finally became clear — without having to read the actual academic paper from the December issue of Psychological Science — why “Leaning to the Left Makes the Eiffel Tower Seem Smaller,” the findings for which three scientists won the year’s Ig Nobel Prize in psychology. The phenomenon takes place even when people don’t know they’re leaning, said Tulio M. Guadalupe, of the Max Planck Institute for Psycholinguistics. But why? Even after Guadalupe’s five-minute talk, complete with references to elephants and number lines, it wasn’t quite clear.

The reason, he explained, is that when people think of numbers, calculations, proportions and sizes, they envision the number line, which traditionally starts with zero and has real numbers growing to the right. Since the smaller numbers are to the left, people find things having to do with numbers smaller on the left as well. 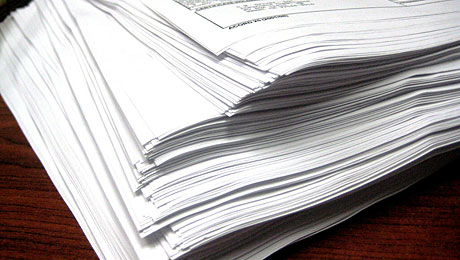 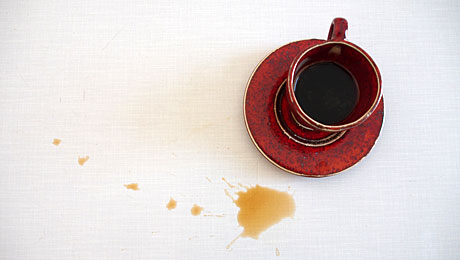 Sometimes questions inspired by science can be as good or better than the science itself, as was the case when Rouslan Krechetnikov discussed his work on “Walking With Coffee: Why Does It Spill?” While the University of California at Santa Barbara professor was entertaining on his own in explaining the Ig Nobel-winning work in fluid dynamics (“mug excitation frequency increases with walking speed”), the lecture got even better when Abrahams asked a key question: In what country are you in the greatest danger of spilling?

This led to questions Krechetnikov could find worthy of exploration: “Has your research considered excitation based on coffee intake?” And had he considered how the addition of dairy and sweeteners affected the excitation of the coffee carrier? 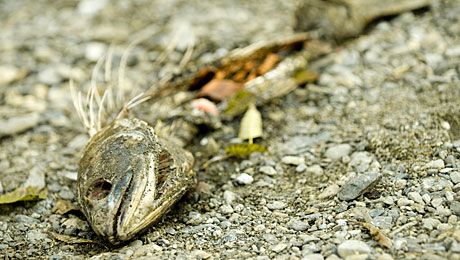 4. The salmon that kicked neuroscience in the pants

It was amazing when Craig Bennett displayed his skills and knowledge in neuroscience to essentially read the mind of a volunteer from the audience (“preferably an Ig Nobel Prize winner, preferably in physics,” Bennett asked) to identify that he’d plucked the queen of spades from a deck of cards, and interesting when Bennett revealed that every card in the deck was a queen of spades, since the reason was to show how science can produce certain results “if you stack the deck in your favor.” That is how Bennett’s team demonstrated that brain researchers, by using complicated instruments and simple statistics, can see meaningful brain activity anywhere, even and especially in a dead salmon.

The Ig-winning research appeared in the Journal of Serendipitous and Unexpected Results in 2010 as “Neural Correlates of Interspecies Perspective Taking in the Post-Mortem Atlantic Salmon: An Argument For Multiple Comparisons Correction.” The point was that neuroscientists had to do the right statistical corrections in their data since everything from fat content in a salmon’s brain to lightbulbs in an MRI scanner can contribute to false positives and indicate a dead salmon has brain activity. “We like to think we gave just a little bit of a kick in the pants,” Bennett said, since before the report up to 34 percent of studies were afflicted, and since the report it’s down to less than 10 percent.

Did Bennett still have the salmon? “No, it was delicious,” he told the audience.

But why a salmon? Why not a dead frog? “I was limited to what was available at 6:30 in the morning at the seafood counter,” Bennett said.

Kazutaka Kurihara and Koji Tsukada didn’t travel from Japan just to collect the Ig in acoustics for creating the SpeechJammer, a machine that disrupts a person’s speech by making them hear their own spoken words at a very slight delay. They seized the opportunity to go to the Franklin Park Zoo to test the device on various animals and incorporate the new research into their slide presentation lecture for the Informal Lectures. “Let’s jam animals!” the exciting slideshow exclaimed. But the very funny slides jus described how they found failure after failure for a variety of reasons and were forced to determine that the SpeechJammer may yet work on animals “other than: dull birds; isolated gorillas; absent lions.”