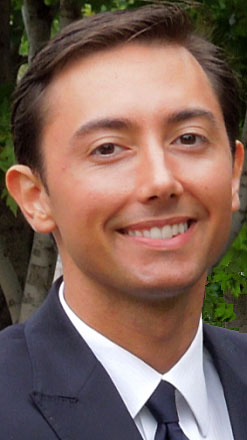 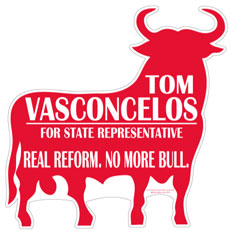 Republican challenger for the 26th Middlesex District seat Thomas Michael Vasconcelos unveiled a street sign Thursday that came in part as an answer to calls to release his tax returns for the past three years.

Answering a challenge to release his tax returns, the Republican challenger for the 26th Middlesex District issued a long answer boiling down to: I can’t, and I wouldn’t anyway.

“This discussion on tax returns is a distraction. I suggest that we focus on the real issues and not turn this race into a festival performance,” said Republican Thomas Michael Vasconcelos, 25, of Somerville, in a Thursday e-mail. It was a reply to state Rep. Tim Toomey releasing three years of tax returns Sept. 25 and calling on Vasconcelos and independent candidate Mike “No Money” Connolly, 32, of Cambridge, to do the same before the Nov. 6 elections.

Connolly responded the next day, calling the move “a desperate attempt by a vulnerable incumbent to intimidate prospective challengers.”

While Toomey said calls for political transparency and openness should include candidates, Connolly — and now Vasconcelos — are rejecting personal tax releases as an unrelated side issue.  (“I am tired of the bull and want to focus on real reform,” Vasconcelos said, taking the opportunity to unveil a “No more bull” street sign.) Not to mention that the young Republican literally cannot match the releases:

I have only filed taxes for one of those three years. I was a full-time student, taking classes, unemployed or involved in paid/unpaid internships in 2009, 2010 and 2011. My total salary was under the filing threshold during two out of the past three years. …

There are tens of thousands of recent college graduates within Massachusetts who are struggling to find quality jobs since getting their diploma. I am one of the unfortunate graduates to have entered the job market during one of the worst economic downturns in the past 50 years. Like me, millions of Americans are struggling to find a quality job in the area of study that has earned him or her their credentials.

Vasconcelos threw some elbows, too, saying to Toomey that “while millions of Americans are struggling to find just one decent job, you are feeding from the government trough with not one but two taxpayer-funded jobs.” And although he and Connolly have agreed on debates and are linked as underdogs against a two-decade Democratic incumbent, Vasconcelos reminded voters there are still differences with the independent. “I would like to know if Mr. Connolly chose to pay the optional higher tax rate on his Massachusetts income taxes,” he said. “I think this is a valid question since you and Mr. Connolly are generally for higher taxes.”

On this count, Toomey — who does pay more taxes than he legally has to — actually won a compliment from the Republican.

“I give you credit for putting your money where your mouth is and for paying the higher rate,” Vasconcelos told Toomey.

But the warmth was short-lived: “Despite this small scrupulous act, your tax policy views are nevertheless flawed,” Vasconcelos said.

Debates among the candidates remain up in the air, with tensions running high over Connolly and Vasconcelos releasing debate details that the Toomey campaign said were undecided. The dates mentioned were Oct. 16 in Somerville and Oct. 23 in Cambridge, but Toomey has another event scheduled for the latter date.

The campaigns’ websites and discussion of their chosen issues are here:

Update: Connolly applauded Vasconcelos’ response and piled on Toomey shortly afterward, reminding him — as Vasconcelos did — that the candidates file detailed reports with the State Ethics Commission and Office of Campaign and Political Finance. As befits a candidate whose campaign is structured around taking no financial contributions, “my reports show that I earn a modest living as a project manager for a software company and that I’ve spent about $50 per week out of pocket on my campaign,” Connolly said.

“Gov. Deval Patrick does not release his tax returns. His official position is ‘It’s my business.’ And I am not aware of any state legislator from Cambridge or Somerville who has released his or her tax returns, either,” Connolly noted.