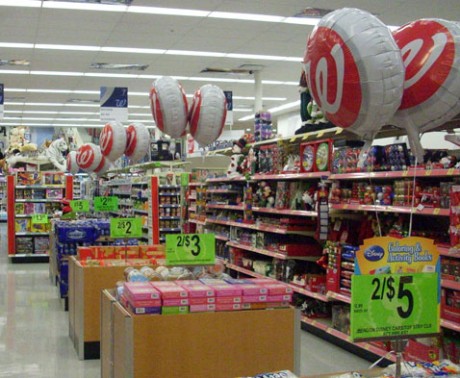 Walgreens store openings come with festive trappings, such as at this Chicago store in 2009. (Photo: mod as hell)

Cheer the free market all you want, but Pier 1 Imports leaving Porter Square to be replaced by a Walgreens is hard to take as a victory for anyone but KS Partners, the owners of 1 Porter Square.

The 21,000-square-foot, two-story Super Walgreens going in there — taking over not just Pier 1 Imports, but the long-empty space overhead that once was a Blockbuster Video —  is literally across the street from a 24-hour CVS at 36 White St. It’s also less than a block away from a Shaw’s grocery store in the same plaza and the Gourmet Express Market and Deli, roughly a block away at 1868 Massachusetts Ave., which are both open 24 hours.

Theoretically, this kind of competition lowers the costs of goods and services, but there’s no evidence this has happened at the existing businesses and no reason to believe it will happen when the Walgreens opens.

Instead, Porter Square loses a business that was mostly unique in the area — its housewares and furniture had a bit of duplication at Tag’s Hardware — and gains one that promises to be precisely duplicative of the pharmacy, grocery and other services already in the area. Well, not just “in the area,” but across the street.

This sounds a lot like a miniature version of the retail pall that landed on Harvard Square over the past decade, except there it was banks rushing in to fill storefronts (an affliction that seeped down Massachusetts Avenue into Central Square as well). Harvard Square, though, is a tourist attraction, and Porter Square is much more a residents’ destination — except that now it’s significantly less so, since basically an entire category of lure to shoppers has been eliminated from the area (barring, again, the smaller assortment of wares at Tag’s and the vintage and used goods at the nearby Eddie’s Furniture, 95 Elm St.) in favor of more of the same stuff people can already get 24 hours a day. It light of it being Halloween season, this is like one house on the block that already has one kind of great candy announcing that it just got twice as much of the same great candy. It doesn’t mean everyone gets twice as much, and it doesn’t add a reason to go there.

It’s just more of the same stuff in one place.