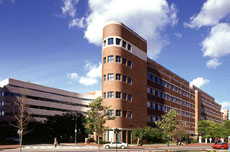 Pegasystems is open for business at 1 Rogers St., the company said Thursday.

The maker of business management software has taken three floors at the address — next to the CambridgeSide Galleria and Hotel Marlowe — as its corporate headquarters. Until Thursday, its base was 101 Main St. The move was long planned, with the deal announced in July 2011 as a way to make room for a company expansion.

Pegasystems was founded in Cambridge in 1983 and is listed as having 1,858 employees. It competes withs such companies as Oracle and Salesforce.