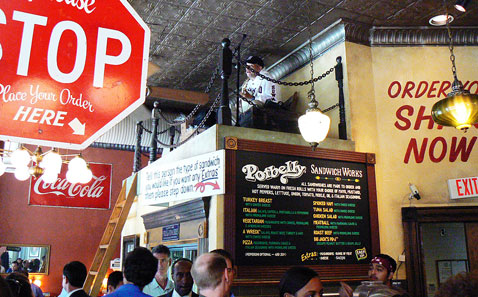 A Potbelly Sandwich Shop in Washington, D.C., shows off not only its menu and decor but the live, acoustic music it boasts at lunch. (Photo: Pierre LeBlanc)

The pizza isn’t coming back, but Chicago may be.

The space at 1 Porter Square once filled by Uno Chicago Grill until March 2010 has a building permit posted suggesting it’s being reworked into a Potbelly Sandwich Shop, another chain with Chicago origins.

Potbelly made its first foray into Massachusetts at Logan Airport in the spring and opened in Downtown Crossing just last month.

Potbelly started in 1977 as a Chicago antiques shop that served sandwiches. Entrepreneur Bryant Keil bought the store with expansion in mind in 1996, according to the company’s official history, and the chain now has more than 240 shops, with expansion announced in Arizona, New York, Oregon and its home state.

The menu features toasted sandwiches at regular, “bigs” or diet-conscious “skinny” sizes, salads, soups and chilies, breakfasts of oatmeal and egg-based sandwiches, baked goods that include custom ice cream sandwiches and shakes, malts and smoothies with signature tiny cookies stuck midway up the straw. The chain plays up the freshness of its food, boasting that meats and cheeses are sliced in the shop daily, as they were 35 years ago.

The stores also have live, acoustic music during lunch, another feature in place since the first store opened. “We like to think that we are probably the world’s largest purveyor of live music (at least when it comes to the number of music venues),” the chain’s website says.

The Porter Square Galleria space — technically at 820 Somerville Ave. — has two stories connected by an elaborate stairwell and an outside dining area. The bottom floor of 1,538 square feet is primarily a bar and the upper floor of 4,700 square feet has dining space, restrooms and kitchens. Various executives and offices at Potbelly, KS Partners and its tenant recruiter, CBRE/Grossman Retail Advisors, were asked how much space the sandwich shop would use. The message: It’s way too early to talk about the site.

The glass doors of the former Uno Chicago Grill are papered over and a building permit posted, though, and three doors down, similar preparation is in place for a Sprint store of up to 2,581 square feet. Sprint representatives did not return calls.

It suggests a sudden turnaround for a shopping plaza that has suffered long vacancies after Uno Chicago Grill, Blockbuster and Jennifer Convertibles left amid bankruptcies during the recent economic downtown. Added to a two-story Super Walgreens filling the former Blockbuster space and pushing out the ground-level Pier 1 Imports, KS Partners’ three-level, 54,265-square-foot building is suddenly filling up again.

Update on Oct. 18, 2012: In mid-October the 1,000-square-foot AT&T store at 1 Porter Square closed and posted a sign it was moving to 1967 Massachusetts Ave. — the former home of Stellabella Toys next to Miso Market. With the wall between the former Uno Chicago Grill and AT&T coming down, a Potbelly Sandwich Shop could have up to 2,538 square feet of kitchen and serving space.