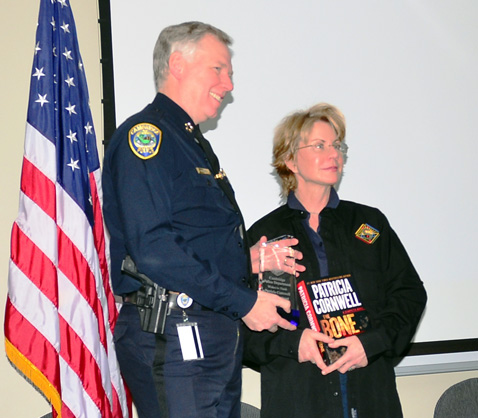 Murder mystery “The Bone Bed” has taken up residency on The New York Times’ best-seller list, but fictional hero Dr. Kay Scarpetta is staying a resident of Cambridge — and the involvement of author Patricia Cornwell, who was in town Tuesday to accept the thanks of the city’s police department, isn’t over either.

A plaque was presented by Police Commissioner Robert C. Haas to thank Cornwell for her $30,000 gift of crime scene management training. When the training ends Friday, Haas said, Cornwell will be back with a signed copy of her latest book and copies for each officer taking part.

“This is a great opportunity for our officers to gain valuable skills,” Haas said. “We’re grateful to Ms. Cornwell for making this training possible, and for the support she’s shown not only for our officers, but for law enforcement as a whole.”

Twenty-one Cambridge Police detectives, along with two detectives each from the Harvard, Massachusetts Institute of Technology and Everett police departments, are being trained at the Robert W. Healy Public Safety Facility in Cambridge by seven instructors from the National Forensic Academy in Knoxville, Tenn.

The author didn’t just give the training though; she’s been taking part, and even bringing Armando’s pizza — Scarpetta’s favorite in the novel — back to the department.

“I feel so incredibly privileged to give back to those in law enforcement who have done so much for me,” Cornwell said. “What a great way to have the best crime scene training made available to police who perhaps can’t attend the 10-week National Forensic Academy in Knoxville. In fact, most departments just can’t spare their investigators for that long or afford the cost.”

Cornwell also endowed a $1 million conservation scientist position at the Harvard Art Museum’s Straus Center for Conservation and Technical Studies in 2008. Her latest novel, “The Bone Bed,” is set in the city, and its police department will stay Scarpetta’s home police force in coming novels, she said.

“The Bone Bed” is in The New York Times’ combined print and e-book fiction list’s top 10 books after appearing in the top spot last week. It’s also in the top 10 of Amazon’s list of thrillers.

Cornwell is to appear at 7 p.m. on the WGBH television show “Greater Boston” to talk with host Emily Rooney.