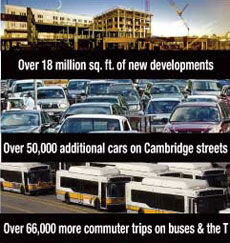 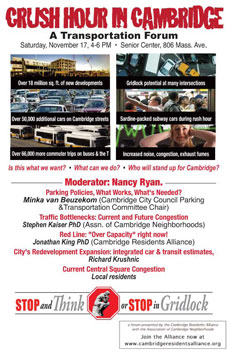 A flier for a Saturday forum is getting attention online and within Cambridge. Click for a full-size PDF version.

With visions of massive development around the city resulting in more than 100,000 car and public transportation trips a day, a residents group is hosting a forum Saturday called “Crush Hour in Cambridge.” But people planning to attend suddenly have a bunch of required reading to do.

The Dukakis Center for Urban and Regional Policy released its annual, 92-page Greater Boston Housing Report Card on Wednesday, the same day the Centers and Squares blog posted a look at the price of local real estate per square foot.

The group, the Cambridge Residents Alliance, projects 18 million square feet in development around the city that will result in 50,000 more car trips and 66,000 more public transit trips a day, and says the kinds of projects getting approved are forcing “our friends and neighbors … out of the city because they cannot afford to live here anymore.”

It’s an issue that got new attention from city councillors in August — shortly after the alliance formed. In addition to citywide development trends, organizers said they were alarmed by interest shown in developing the public housing at Newtowne Court as well as the Millennium biotech building proposed for 300 Massachusetts Ave., near Central Square, revelations of expiring affordable-housing units and an accompanying residential building that would eliminate much of a park.

The 4 to 6 p.m. Saturday event, to be held at the Senior Center at 806 Massachusetts Ave., Central Square, has a clear point of view, but its flier suggests a fact-based approach, with topics including “Traffic bottlenecks: current and future congestion,” “City’s redevelopment expansion: integrated car and transit estimates” and “Parking policies: what works, what’s needed.” (The parking talk is listed as being given by city councillor Minka vanBeuzekom, chairwoman of the council’s Parking and Transportation Committee.) But the group also lists as part of its agenda a “Keep Cambridge Livable” petition asking for at least a one-year moratorium on zoning changes, which brought about the creation of opposing group A Better Cambridge.

“We’ll have no other choice but to deal with price increases if the city passes policies like downzoning or moratoriums on upzoning which freeze the supply of new housing,” said Jesse Kanson-Benanav, chairman of A Better Cambridge, on Facebook as the Cambridge Residents Alliance flier hit the Web with a critical look by political blogger Matthew Yglesias.

“It’s a great example of the rhetoric of reaction in action in a community that probably thinks of itself as very progressive and forward-looking,” Yglesias said, questioning whether refusing more housing stock in a desirable city was really progressive and calling it “far from obvious that this greater density really will decrease quality of life.” (The Curbed blog noted the flier and phrased the debate as being between “NIMBYs and YIMBYs.”) Yglesias said:

Consider the issue of buses. The more customers a given bus line attracts, the more financially viable it becomes to increase frequency on that bus line. But greater bus frequency benefits everyone who rides the line. In other words, a denser town offers a higher-quality bus experience, not a lower-quality one. It’s drastically cheaper on a per capita basis to provide certain kinds of public services — police, fire, street cleaning — in a denser city. Your libraries can keep longer hours. Your public school system can offer families more choices or less travel time.

Meanwhile, Centers and Squares looked for recent highest-priced property sales in Cambridge and found only four buildings asking more per square foot than $1,000, all full-service luxury buildings on the Charles River or in Harvard Square. There were 14 condominiums or houses sold in the past three years for more per square foot, from $1,003 to $1,516, Elizabeth Bolton wrote.

Houses aren’t selling for as much — certainly not off Brattle Street, Bolton said.

And the Dukakis Center’s message? “We may be at a new point in the housing cycle where housing demand — both in the homeowner market and in the rental market — will begin once again to outstrip supply,” it said in a blog post calling for a “new paradigm” in building more housing, but with much of it in new forms to serve a changing (and aging) population.

Housing production needs to double or even triple yearly between now and 2020, the center says in its report, “with the likely shift in demand toward more multi-unit condos and rental housing.” That will demand more use of so-called 40R zoning incentives to build smaller and more densely.

In addition to density, the report calls for “smartly constructed communities,” echoing the language of A Better Cambridge: “We believe that well-planned development can play a positive role in strengthening the social, cultural and economic diversity of Central Square and other Cambridge neighborhoods,” Kanson-Benanav said, with members using the term “smart growth” as shorthand for “sustainable growth and appropriate density.”

The question Cambridge Residents Alliance leaders will likely ask: Are Cambridge officials doing it the smart way, especially since adding to Cambridge housing stock in recent years has failed to lower prices, defying the usual rules of supply and demand?

“Recently it’s been relatively inelastic in term of the economics,” said Stuart Dash, director of community planning with the city’s Community Development Department. “Usually the elasticity of supply and demand is that if supply goes up, then price comes down. In recent years it’s not seemed to be that way.”

On the other hand, Dash said in August, “It doesn’t mean it will stay that way forever, or that increasing supply at a certain point won’t push down prices.”