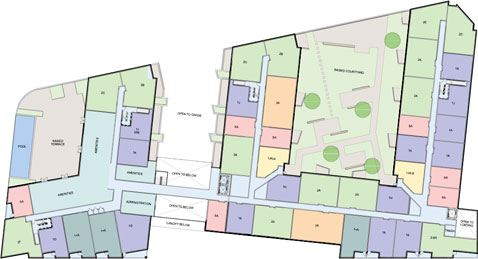 A large project proposed for 165 Cambridgepark Drive is the only one of four coming to the Alewife area with three-bedroom units — two are seen above in orange — suitable for families. (Image: Hines)

Middle-class residents complaining for years about the cost of living in Cambridge — how hard it is to afford and how impossible for kids trying to return after college — found minor cause for hope in the past week, courtesy of a developer in the Alewife area and some members of the City Council.

There was mostly discussion of housing for low-income residents by the council on Monday, including a request by Denise Simmons for fellow councillors to approve a look at bumping up how much affordable housing is required in new development. Cambridge has some 5,500 low-income households in its affordable properties, according to John J. Woods, deputy director of planning and development at the Cambridge Housing Authority, and some 11,000 more on a waiting list.

But the Community Preservation Act formula approved Monday putting 80 percent of a total $10.7 million into affordable housing is supposed to help the working middle-class as well, Minka vanBeuzekom said:

So my hope is if we’re going to expand this, it would be to allow more working middle-income families to find affordable housing, rather than constantly trying to expand the pool of very low-income affordable housing. In 1988 [developer Forest City] committed to building 50 units of what they were calling middle-income housing, and they found that so difficult. For them it was easier for them to build more lower-income because there was so much more money available from the federal government to do that.

“I want to make sure that if we are talking about affordability, we’re also making it clear we want to increase it so middle-income families can also afford to live here,” she said.

Marjorie Decker, though, ended that line of discussion by saying that helping the middle-income has “always been a priority for the city” but wasn’t a part of Simmons’ policy order. Decker, who leads the council’s Housing Committee, said councillors should put together a list of issues they’d like discussed, although she couldn’t guarantee the committee would get to every one.

Part of the problem is that developers tend not to build for families. Of the four large apartment complexes being built in the Alewife area, 68 percent of the units are studios or have only one bedroom. (David Maher said developers are also eager to build “micro-units” because they are “very, very popular,” although none of these tiny personal areas with access to dorm-style common areas have been built or even approved in Cambridge.)

But a plan presented Tuesday to the Planning Board included an interesting detail: While the developers of the three large projects already announced in the area (for the old Faces nightclub site on Route 2; 70 Fawcett St.; and 160 Cambridgepark Drive) had no three-bedroom units, the company behind the proposal for 165 Cambridgepark Drive plans nine. It’s unclear if any of the nine will be deemed officially “affordable” or priced for a middle-class family, but it’s a signal that market forces have spoken to Hines, an international real estate company with Boston offices.

Forest City got council attention for another housing-related reason this summer, when it wanted permission to build higher than the law allows near Central Square. A 130-apartment tower was cut from its plans after residents were upset it would eliminate must of a park, and the commercial building that made up the rest of its plans ran out of time in a scramble to save 150 of its University Park affordable units from expiring and turning into market-rate units.

Some 824 affordable units expire before 2020, Decker said, but money approved Monday by the council can help preserve some.

A different set of economic rules

Forest City became part of an ongoing debate about whether Cambridge follows the same economic rules as most of the world, where building housing keeps the cost of housing down. Some say in Cambridge the cost of housing rises no matter what, meaning the rich can afford to stay, the low-income get subsidies to stay and the middle-class are forced to Somerville, Medford, Malden and beyond.

That theory was essentially confirmed last month by Stuart Dash, director of community planning with the city’s Community Development Department:

Recently it’s been relatively inelastic in term of the economics [in Cambridge]. Usually the elasticity of supply and demand is that if supply goes up, then price comes down. In recent years it’s not seemed to be that way. It doesn’t mean it will stay that way forever or that increasing supply at a certain point won’t push down prices. If you look at it over a long number of years you’ll see dips and ups and downs based on supply and demand.

With the economic downturn of the past few years it’s been harder for many people to get loans to buy houses, and that forces more people to rent — raising the price of rentals, he noted.

Wood, citing a city survey from March, said the median monthly rent in Cambridge is $2,300 for a one-bedroom apartment and $2,578 for a two-bedroom. Most people on the affordable-housing waiting list would need to triple their income to move to Cambridge on their own, he said.

The real estate site Zillow puts the midpoint of home sale prices in Cambridge at $428,900, with the Wellington-Harrington neighborhood remaining the most affordable place to buy. The midpoint home price there is $389,500 — still about $25,000 over the midpoint price in neighboring Somerville.

Tim Toomey said in a policy order councillors wanted to know what the city was doing to help.

The Cambridge Chronicle’s Erin Baldassari has a more complete report on the affordable-housing aspects of Monday’s council discussion here.