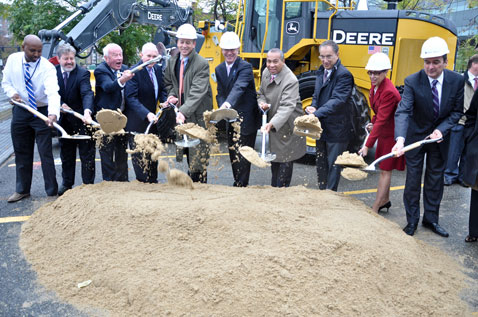 There’s only one thing standing between Biogen Idec returning to Cambridge, if a report from the Community Development Department is true: a zoning requirement putting a cafeteria on the ground floor of the biotech company’s headquarters and opening it to the public 20 hours a week.

“We believe that the city’s underlying desire for active ground floor uses would be met by other activities, such as a community lab and restaurant use,” said department head Brian Murphy in a letter to be heard Monday by the City Council, explaining that getting rid of the requirement would “allow more flexibility for programming within the building.”

The requirement, as indicated in talks with the company, is “the remaining outstanding barrier … that would hinder Biogen Idec Inc. from relocating its headquarters back to Cambridge,” Murphy said.

Since Murphy’s report is framed as a response to the council’s own unanimous order to identify barriers to the company’s return to Cambridge and “take the necessary action to alleviate” them, it would look likely for Biogen Idec — still Cambridge’s eighth-largest employer last year despite the move of its executive offices to Weston in 2010 — to get what it wants.

The move to Weston was decided in the fall of 2008 by the company’s former chief executive, James Mullen, and the company signed a 15-year lease on 74 acres off Route 128, built a flagship 356,000-square-foot office building and in mid-2010 began moving some 500 workers there. Then Mullen retired June 8, 2010, and George A. Scangos was named his successor. Less than a year later, Scangos was complaining to Reuters that in Weston

I can sit here and feel good that I’m an important person and I have a three-room suite, but I actually don’t like it because there’s no one around, theres no energy … Why not have smaller offices or no offices, and just put everybody closer together? It takes less space, it costs less money, it fosters interaction and it has more energy.

By June 2011 he had new executive offices set up in Kendall Square and confirmed to Xconomy that he was working to sublease in Weston so he could move everyone back to the company’s birthplace in Cambridge. On July 20, 2011, The Boston Globe broke the news: All 530 workers in Weston would be moving back in 2013, consolidating some 2,000 of the company’s total 4,400 employees in six Kendall Square buildings — including two new ones.

With contracts in place, on Oct. 27, 2011, company, local and state officials including Gov. Deval Patrick gathered for a formal groundbreaking on those buildings: a six-story, 307,000-square-foot building at 225 Binney, to be the first of five Alexandria Real Estate buildings in the square and the new executive officers, and a 190,000-square-foot building at 17 Cambridge Center, to be built by developer Boston Properties.

“We are delighted that Biogen Idec is moving its headquarters to Cambridge and that the Alexandria Real Estate development in Kendall Square is commencing,” said councillor David Maher, then mayor. “This development promises to create more open space, retail space and housing opportunities, in addition to the new lab and commercial spaces. This project is further evidence that Cambridge remains the innovation hub of the region.”

That makes the suggestion by Murphy and City Manager Robert W. Healy to eliminate the cafeteria zoning requirement less the removal of a barrier to Biogen’s return than a welcome-back gift — if the council, which issued the order when Scangos was only “actively investigating” a return to Cambridge, is in the welcoming mood. (Hint: Probably.)