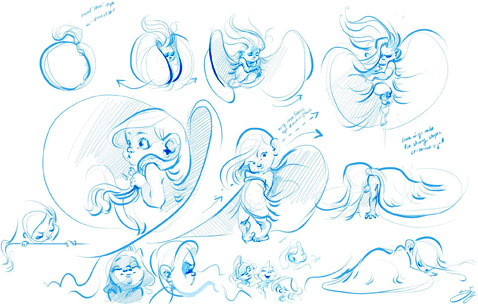 Character sketches for “Peach Ice Cream Adventures” give a sense of what children will see when playing the educational video game.

Not every video game project can claim support from Cambridge and Boston city councillors. Peach Ice Cream Adventures and its PICA Project is the exception — an interactive, tablet-based adventure that launches a funding campaign today with city councillor Leland Cheung and Boston’s Tito Jackson as hosts for an array of local tech luminaries.

The idea: An early education program — in this case, teaching Mandarin Chinese in the context of scientific exploration — disguised as an iPad game for 3- to 6-year-olds.

The game lets children follow Peach Blossom Monkey into magical lands to seek ingredients for making peach ice cream. Along the way, the game aims to teach young players about shapes, colors, numbers, plants, animals and how ice cream is made.

“Because PICA is built from an existing technology platform, any game created with it can be offered in multiple languages,” said founder Vicky Wu Davis, a self-described serial entrepreneur and video game veteran. “Based on varying Kickstarter fundraising goals, PICA will be offered in Chinese, French, Spanish, ESL for Spanish-speakers and German.”

With 20 days to go, the project has $5,694 from 113 backers, but the goal is $60,000. Rewards for backers range from copies of the games to a “green screen session” that lets a backer’s child interact with Peach Blossom Monkey in a 30-second trailer.

“The Kickstarter funding will enable us to finish the PICA game that we have already put a ton of time and effort into. We have an awesome crew of artists, designers and developers ready to finish PICA as soon as the funds are in,” Davis said. (If more money is raised, the project can add an Android version and add languages, according to its Kickstarter page.)

The effort starts today at TechStars Boston in Kendall Square, she said, with a “Connecting the Dots” roundtable discussion.

The idea is to look at how to foster early interests, skills and talents in today’s youth that will prove important for job-readiness and social acculturation with out-of-school activities, technology resources and entrepreneurship, “particularly because our nation continues to become more linguistically and culturally diverse and [Science, Technology, Engineering, and Mathematics] education becomes increasingly important,” she said.

As Davis describes it:

This Connecting the Dots Roundtable has several aims: to illustrate the connection between such seemingly disparate learning objectives as STEM and second-language learning in order to recognize they are complementary; introducing and connecting educators of different age groups so they can discuss the links between and needs of different educational phases; and connecting current benchmarks of college and job readiness to educational transformation. Standardized tests and college-readiness are benchmarks that shouldn’t be thrown aside, but whatever we do with our early learners must work with K-12 and beyond: early learners will continue to progress to the next phase. By sharing personal experiences and desires, teachers, innovators, and entrepreneurs can connect the dots between current institutions and government to find potential and ways to develop it.