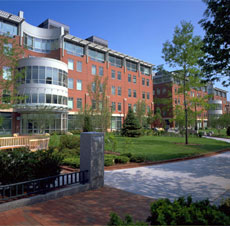 Aveo, a life sciences company, has headquarters on Sidney Street in University Park.

Two Cambridge life sciences companies are having a good day: Aveo, in partnership with Astellas Pharma of Tokyo, announced Wednesday that the U.S. Food and Drug Administration accepted a new drug application for tivozanib, to treat victims of kidney cancer; and Ironwood, with Spanish partner Almirall, got the okay to market the Irritable Bowel Syndrome treatment Constella in the European Union.

Aveo expects the federal review of its drug — which is expected to eventually be sold as Tivopath — to be complete by July 28, a representative said. But the acceptance of the drug application triggers a $15 million milestone payment to Aveo under a development and commercialization agreement with Astellas.

In treating advanced renal cell carcinoma, the oral, once-daily tivozanib could help hundreds of thousands of people. The company cites statistics showing more than 250,000 people are diagnosed with kidney cancer and more than 100,000 people die of it each year.

Ironwood’s Constella is an oral, once-daily medication targeted at the estimated 10 percent of the European population suffering from Irritable Bowel Syndrome — some 15 million people. “There are few prescription treatment options for this condition approved in the European Union,” an Ironwood press release said. “Constella is the first and only prescription medicine approved by the European Commission for … IBS-C in adults.”

Almirall holds exclusive marketing rights for the drug in the European Union and several other countries outside the United States since signing an agreement with Ironwood in April 2009, the companies said. But treatment of the disease has already been a boon for the 301 Binney St. company, which last month took on another 93,000 square feet in office space for its 350 new workers, mostly sales reps, since winning Federal Drug Administration approval for an Irritable Bowel Syndrome drug called Linzess last summer. The announced hiring would suggest it is ramping up to having some 626 employees.