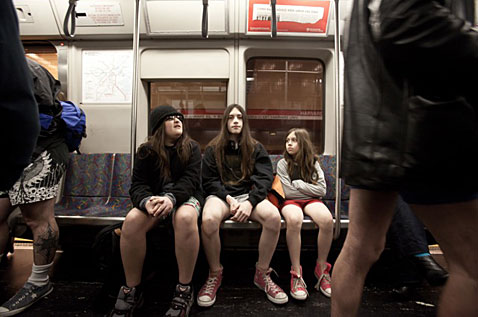 It’s cold, and people want to stay inside and listen to music. That explains most of this week’s offerings, anyway, if not the one where people are offered the chance to not wear pants:

Kick up your heels to BCMFest’s Irish, Scottish, Cape Breton and other Celtic music. The 10th annual BCMFest, a celebration of local Irish, Scottish, Cape Breton and other Celtic music and dance, takes place Saturday at Harvard Square’s Club Passim (47 Palmer St.), First Parish Church (3 Church St.) and Atrium (the fourth floor of 50 Church St.), starting with a focus on children’s and family entertainment. The Dayfest of songs, storytelling and other entertainment geared toward children and families include some 29 performances ranging from the utterly traditional to “surf sligo,” a mash-up of traditional Irish music and 1960s surf rock. At 7:30 p.m. comes the BCMFest Finale, hosted by Brian O’Donovan, host of WGBH’s “A Celtic Sojourn” and including Highland Dance Boston, a tribute to the late Boston Irish music legend Larry Reynolds by the Boston Comhaltas Music School and other guests. The schedule and tickets – up to $15 for Dayfest or $25 for Dayfest and the finale – are here.

Appreciate MLK through theater and talk. With Martin Luther King Jr. Day near, the Central Square Theater has three showings of Katori Hall’s “The Mountaintop” over the weekend (at 3 and 8 p.m. Saturday and 2 p.m. Sunday) and Harvard fellow Kellie Carter Jackson will speak at 3 p.m. Sunday on “The Politics of Remembering King.” The talk is free at the Central Square Branch Library, 45 Pearl St., Central Square. The play, with tickets between $15 and $50 depending on seat and time, is for theatergoers 13 and over. The theater, at 450 Massachusetts Ave., describes the play this way:

April 3, 1968. Having just delivered his magnificent oration “I’ve Been to the Mountaintop” at Mason Temple in support of a sanitation workers’ strike, the Rev. Dr. Martin Luther King Jr. returns to Room 306 at the Lorraine Motel in Memphis. A maid comes to his door with coffee. An unlikely relationship is forged that ventures into the political and personal, compelling him to confront his destiny and the fate of the nation on the eve of one of the most critical moments in American history. Winner of the Olivier Award for Best New Play, “The Mountaintop” is presented in celebration of the 150th Anniversary of the Emancipation Proclamation.

Saturday’s matinee is preceded by an hourlong symposium on the Emancipation Proclamation with Charles Ogletree, the Harvard Law School professor and director of the Charles Hamilton Houston Institute for Race and Justice, and Keith Motley, chancellor of the University of Massachusetts at Boston. There will also be a post-show discussion on King’s legacy.

Enjoy the sexy nexus (the snexus?) of steampunk, pop and soul music at Johnny D’s. You can start the day with School of Rock’s Black Keys vs. The White Stripes show ($12, from 4 to 6 p.m.) but things get truly interesting at 9 p.m. with the local, four-band bill of hip-hop performance artist Madame Psychosis; the piano- and drum-driven Sarah RabDAU and Self-Employed Assassins, sometimes likened to Bjork or the Cocteau Twins; the steampunk soul band What Time Is It, Mr. Fox? and glam funksters Johnny Blazes & The Pretty Boys. “This show is going to be sexy,” assures the ur-Fox, Brian King. General admission or dinner tickets are here for the show at Johnny D’s at 17 Holland St., Davis Square, Somerville.

Wear no pants on the T. No, really. The sixth annual No Pants Subway Ride is Sunday. It is scheduled to start at Dewey Square in front of the South Station T station in Boston, where people who want to ride the T for the next two hours without pants will be assigned a team and route. Riders are invited to end up at Kings Back Bay near the Prudential stop for the 21-plus 6 p.m. Sans-Pants After-Party, at which “people not wearing pants can get a discount on pizza and nachos” while they watch the (ugh) Patriots game. Obviously this isn’t really a Cambridge and Somerville event, except that the cities’ red and green line T stops almost guarantee the city will be collectively wearing somewhat fewer pairs or pants than on a typical winter Sunday. For more on this flashmobby event, which takes place around the world, check out the site of local organizer BostonSOS.

Mix classical, poetry and pop at Gallery 263. Performer Mary Bichner – famed for her perfect pitch and synesthesia as well as her music – expands her “classipop” approach at this 8 p.m. Sunday show that, in addition to her own 45-minute set, includes the classical Triple Strung Trio and violist Amanda Wang, as well as plenty of performance art: an improvised music-and-movement piece with UnAmerika’s Sweetheart Karin Webb; a musical performance of poet Amy Macabre’s “And They Did Not Die”; and a recitation by Edgar Allan Poe, portrayed by literary historian Rob Velella. The all-ages show is $10 at Gallery 263, 263 Pearl St., Cambridgeport.