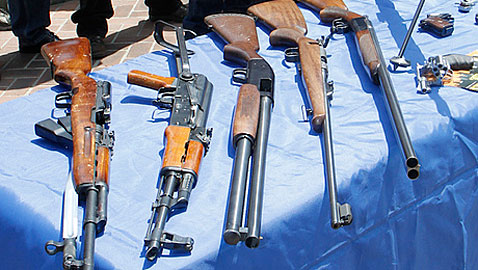 After a recent spate of gun violence nationwide, including a December shooting in Newtown, Conn., that left 20 children and six adults dead, Cambridge’s mayor is considering a local gun buy-back program.

In a simple, open-ended policy order set to be heard Monday at a City Council meeting, Mayor Henrietta Davis asks the city manager to look into the possibility and report back.

There have been several gun buy-backs since Newtown, from Los Angeles to Cincinnati, in which  guns are accepted, no questions asked, in return for cash or gift cards. But recent looks at the programs – including within the past couple of days by National Public Radio and USA Today – suggest they are ineffective in comparison with the sheer number of firearms in the hands of the public, and because the people who turn them are already considered low-risk for gun violence.

Asked if he expected criminals to turn in weapons during a Santa Fe, N.M., buy-back this weekend, police Chief Raymond Rael said, “In reality, probably not. Anyone who is serious about stealing a weapon and using it in a criminal act isn’t likely to turn it in. But we do anticipate that there will be some weapons turned in by members of the general public who have either inherited weapons or are concerned about leaving weapons in their homes, loaded or unloaded, and just feel they no longer have any use for them.” 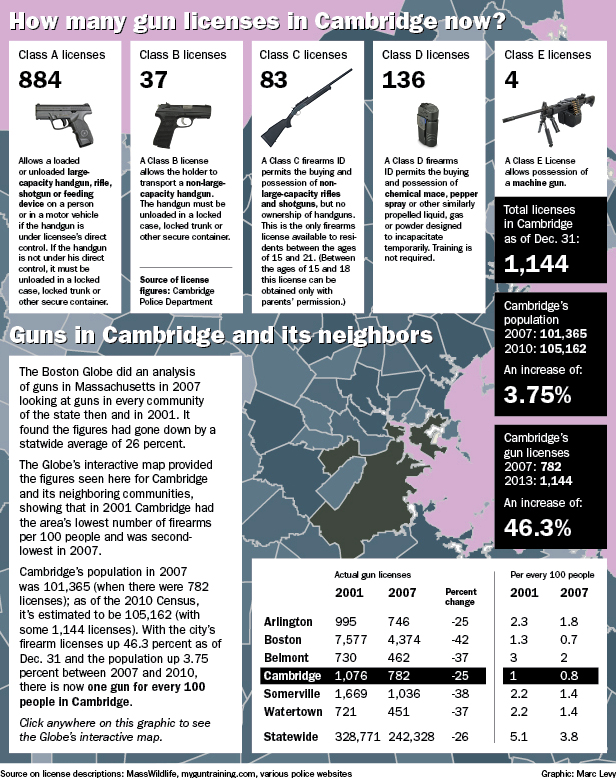 There were 1,144 weapons licenses in Cambridge as of Dec. 31, according to data provided by the police department, or 1,008 if Class D licenses for liquid, gas or powder weapons such as mace or pepper spray are taken out.

“We do not have access to the types of firearms that license holders possess; only that someone has a license to carry,” said Dan Riviello, director of communications and media relations for the department. There are only four Class E licenses granted in the city, he noted. Class E licenses allow possession of a machine gun. But the bulk of what remains are Class A licenses, which include large-capacity handguns, rifles, shotguns or feeding devices – 884 of them.

There are only 37 Class B licenses issued, which lower capacity handguns, and 83 Class C licenses for low-capacity, hunting-style rifles and shotguns.

Riviello pointed to data gathered in 2007 by The Boston Globe as showing Cambridge and the state as a whole seeing a steady decline in the number of licenses issued from 2001-07, with less than one in 100 Cambridge residents possessing a license that year – at 0.8 per every hundred people, one of the lowest ratios in the state.

That has grown since, though, adding 362 licenses in five years for an increase of 46.3 percent, putting Cambridge at a rate of one weapons license for every hundred residents.

One potential source for legally obtained firearms is gone: Roach’s Sporting Goods shut down in May in Porter Square after 108 years in business. It was Cambridge’s only legal gun seller.

Police had no estimate on the number of unlicensed firearms in the city, Riviello said, but in recent history there has been no armed home invasions or crimes of that type in which firearms are used or shown.

“It has been our experience that we often encounter illegal firearms during the commission of drug-related crimes, as drug distribution and firearms often go hand in hand,” Riviello said. “The vast majority of crimes in Cambridge do not involve firearms. Armed street robberies are very few in comparison with ‘strong-armed’ street robberies. which often involve the threat of a firearm or, in some case, involve pellet guns, fake guns, etc.”

When police cleared out a party at the Gateway Inn on July 5, they found that among the more than 30 people there, all were under 21 and some were under 18 – and among them they had a knife and three loaded handguns: two semiautomatics and a silver revolver.